DIDO AND AENEAS OR ULYSSE AND ANDROMACHE
ATTRIBUTED TO THE PARISIAN WORKSHOP OF THE TOUTIN FAMILY. 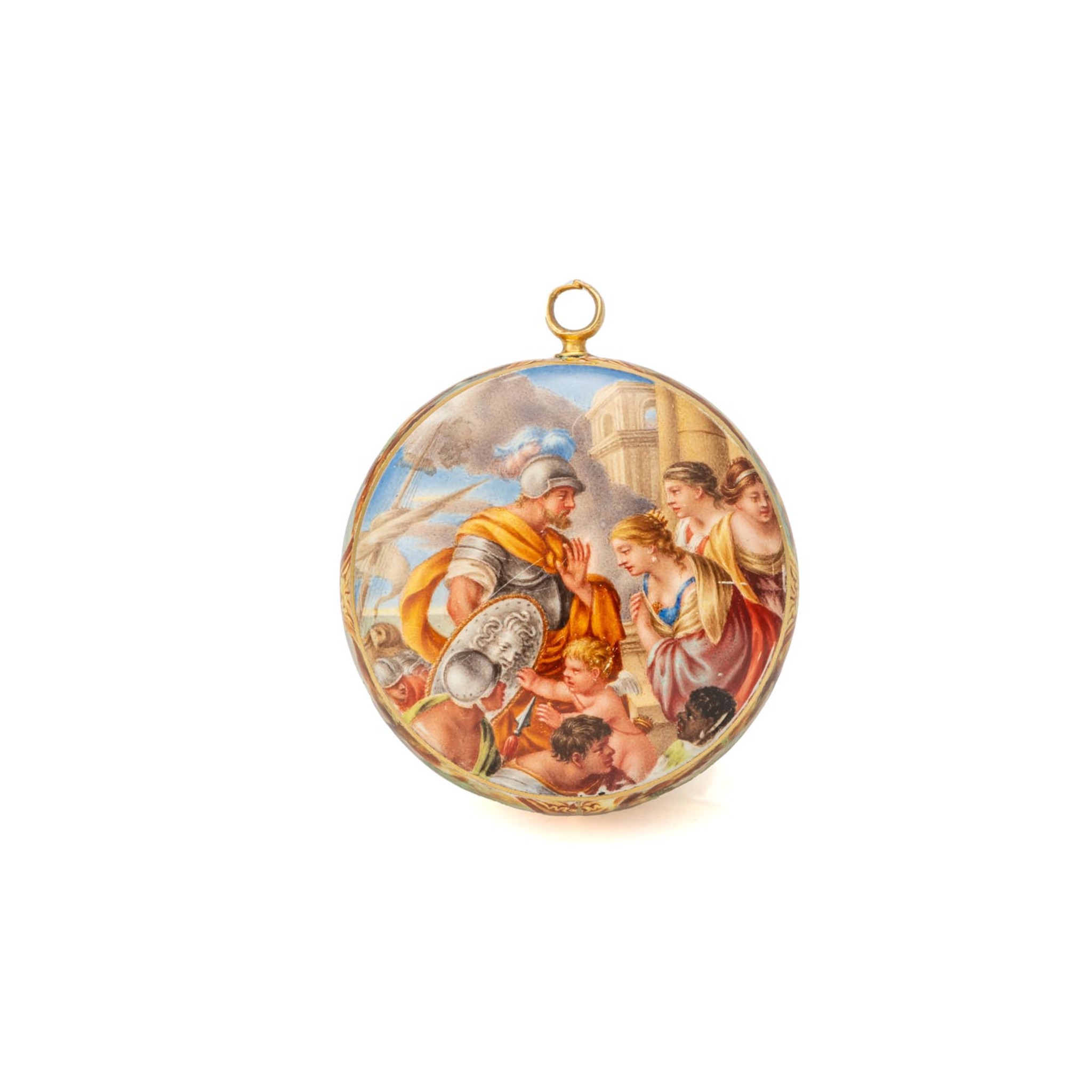 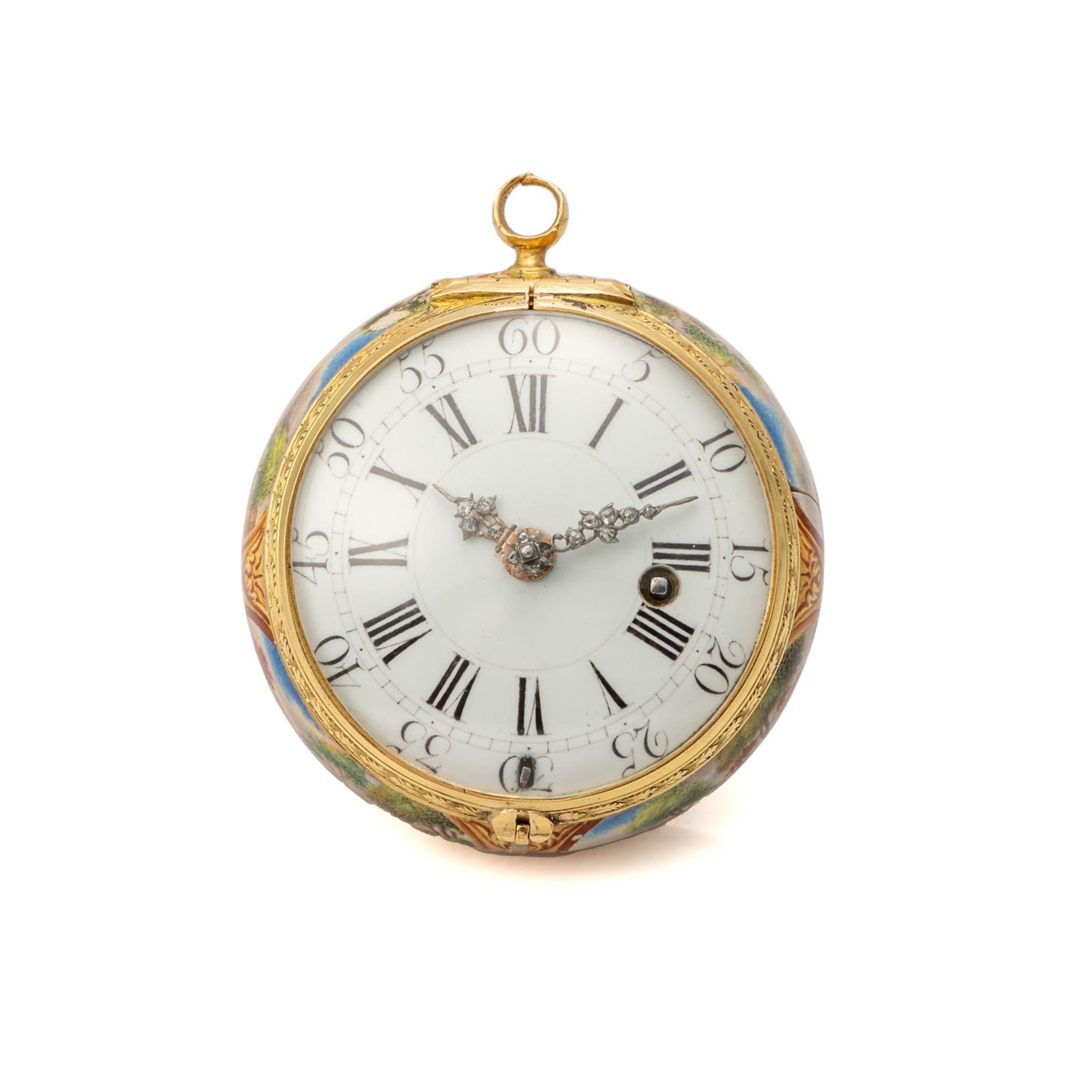 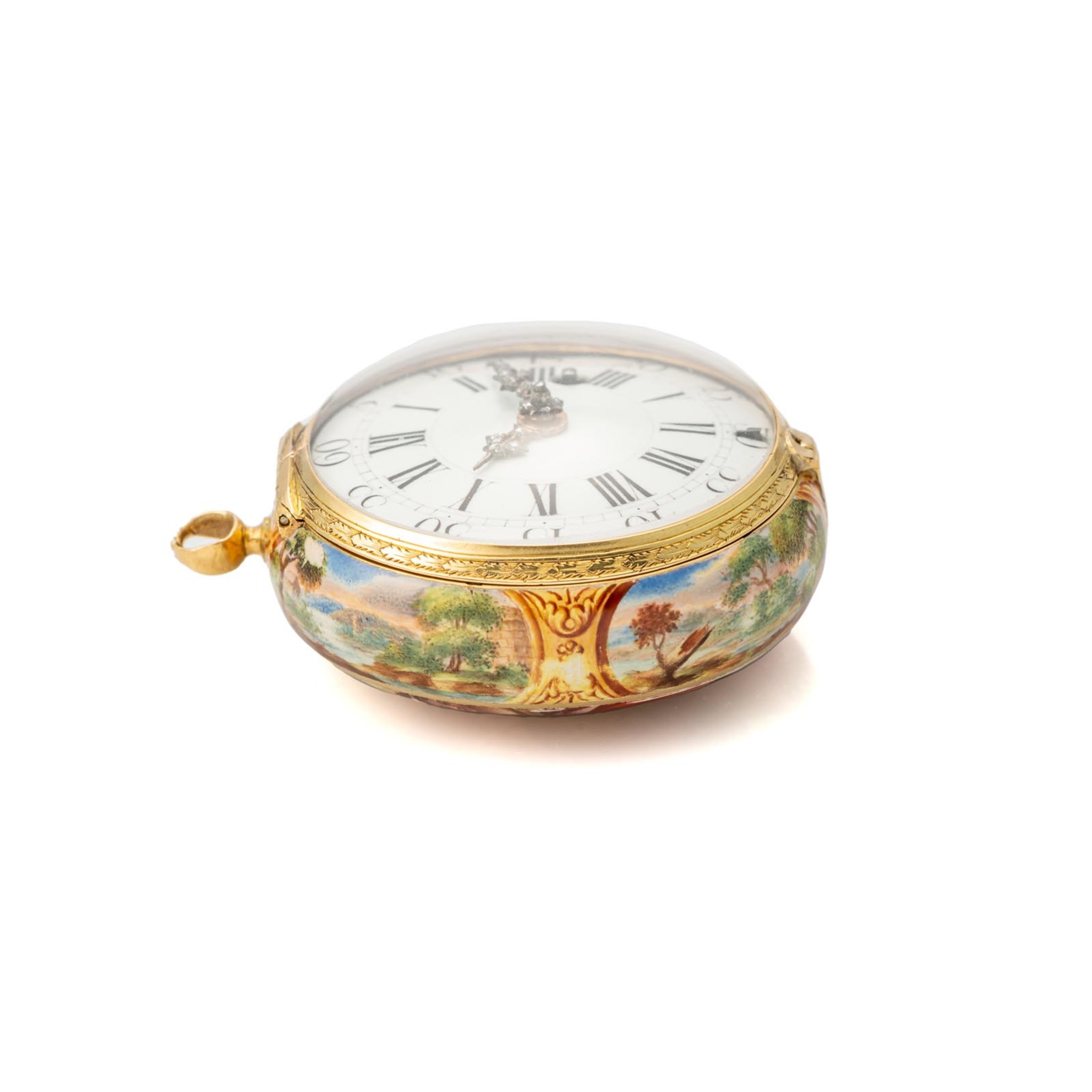 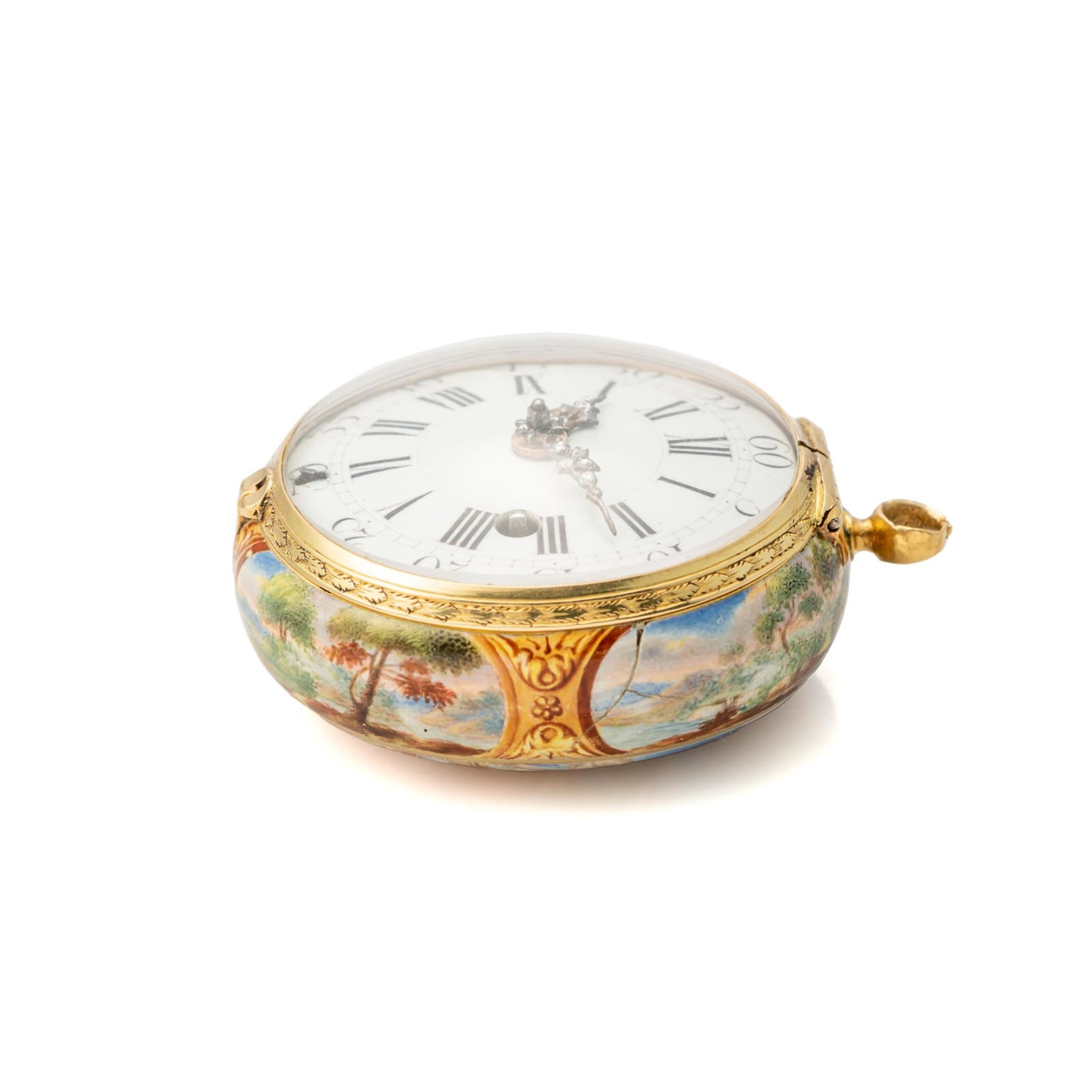 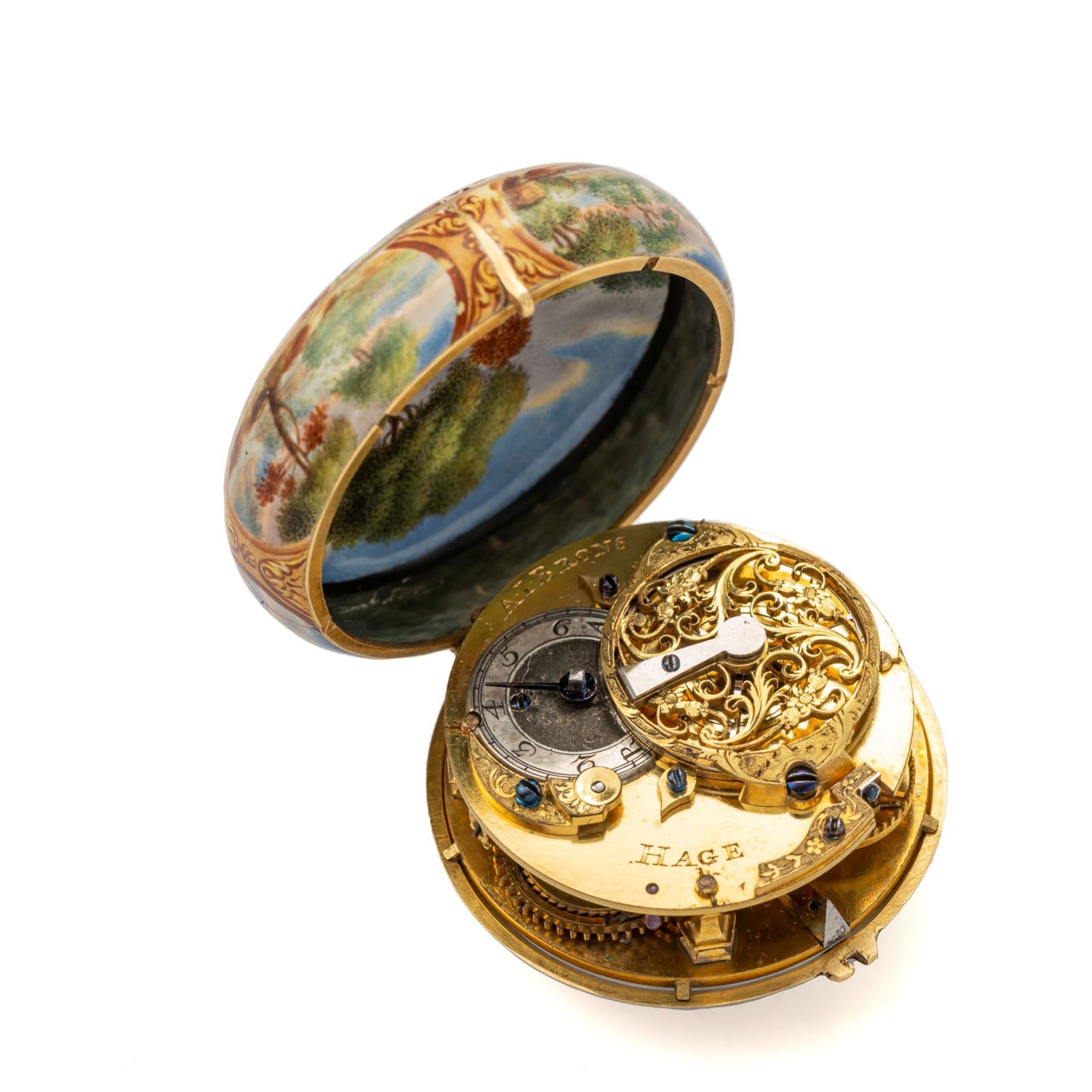 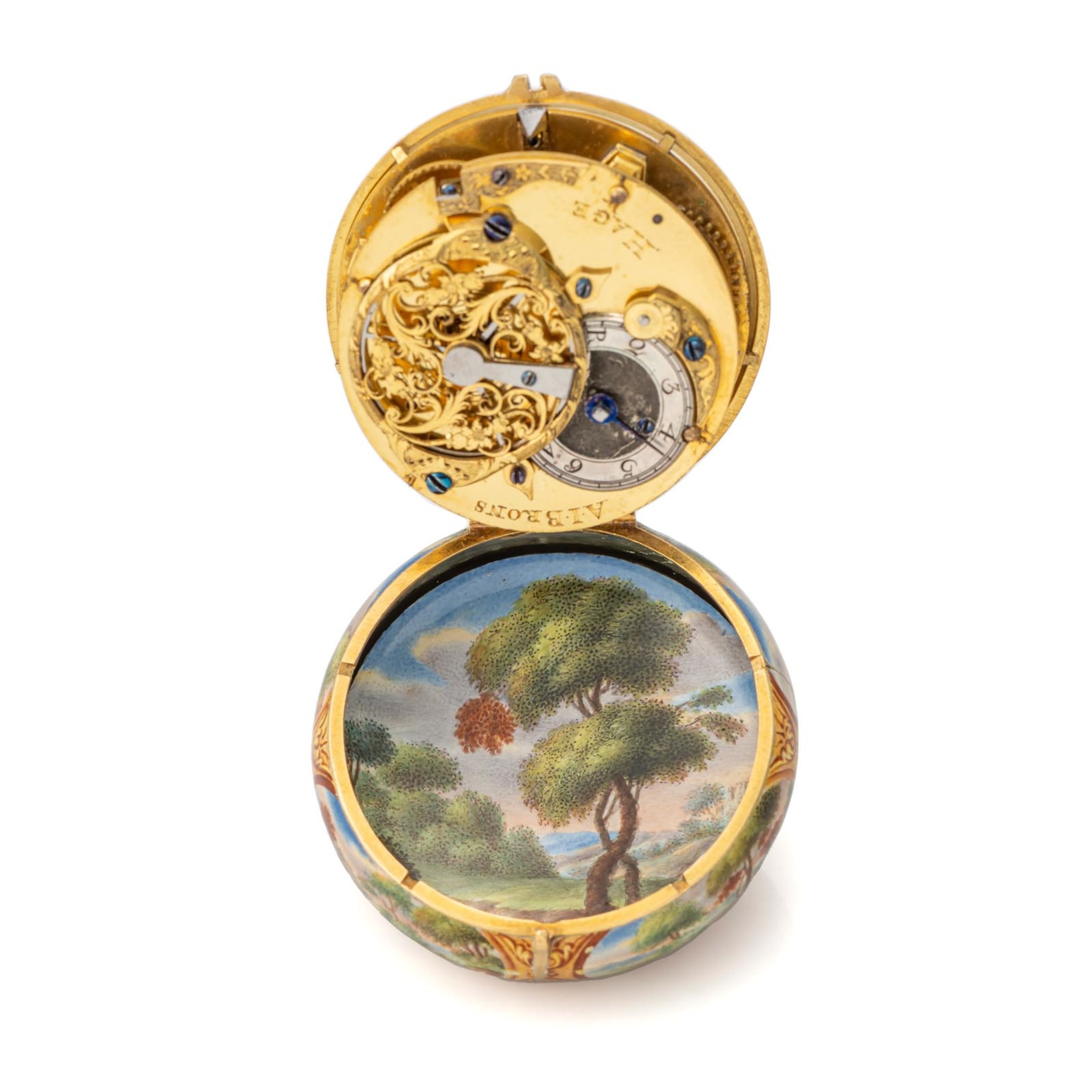 Dido and Aeneas or Ulysses and Andromache?
Today it can be extremely difficult and hazardous to identify the iconography used on art objects from past centuries. This watch is an exemplary case in point.
The case of our watch is of the “bassine”-type, dating from the middle of the 17th century, and was most probably made in Blois or Paris. The painting on polychrome enamel is not signed. The later movement is signed by a watchmaker active in The Hague in the Netherlands.
Studies published by various art historians lead us today to attribute this enamel work (circa 1650-1660) to the Parisian workshop of Henri Toutin (1614-aft.1683) and Jean (II) Toutin (1619-aft.1660), French enamel painters active in Paris. They were the sons of Jean Toutin (1578-1644), a goldsmith from Châteaudun in Poitou, who is considered to have invented the technique of painting on enamel in the early 1630’s. It is worth noting that the use of this new technique of applied art was to revolutionise the style and shape of watch cases for several decades.
As for the scene on the case, three hypotheses are currently put forward. Catherine Cardinal (1984) considers it to be “The Meeting of Dido and Aeneas”, while Hans Boeckh (2009 and 2015) interprets it as “Ulysses demanding that Andromache hand over Astyanax, the son of Hector”. Prior to these two interpretations, the subject was given as “The Meeting of Cleopatra and Mark Antony” (Rosenberg 1966; Thuillier 2000). Today, all historians agree that the iconographic source is a lost painting by Sébastien Bourdon (1616-1671), a French painter active in Paris, whose connections with certain Parisian goldsmiths are now known.
If the scene represents “The Meeting of Dido and Aeneas”, we see Dido, Queen of Carthage, surrounded here by two attendants, a page and a black servant, bowing to Aeneas, a Trojan hero on the run, bearded, helmeted and armed, who has just disembarked from his ship. This is the starting point of a tragic love story.
If the scene depicts “Ulysses demanding that Andromache hand over Astyanax, the son of Hector”, to him, we see Ulysses, king of Ithaca, warrior and conqueror of the Trojans, coming to claim his son from a widow in order to suppress him so that he does not later claim the throne of his grandfather, Priam, King of Troy. It is a tragedy that does not make Ulysses, one of the heroes of the Iliad and the hero of the Odyssey, any better.
In his 2009 article, Hans Boeckh refers to an anonymous French engraving with the same subject; it is preserved in the Albertina in Vienna (etching and burin; Ø 32.1 cm.; Inv. F/II/20/29). Unfortunately, without a caption, it is given by the Austrian institution as “Cleopatra and Mark Antony at Tarsus”.
We have listed five other watch cases (or case fragments) with this subject; they are in the Louvre Museum in Paris, the Patek Philippe Museum in Geneva and in private collections (see list below).
The inside of our case-back – the counter-enamel – is painted with a wooded landscape dominated in the centre by a monumental tree, with the ruins of an ancient castle or fortress in the background. On the case-band, four oblong medallions (or cartouches) containing various landscapes are separated by yellow ochre fleurons. All these compositions evoke the style of engravings by Balthazar Moncornet (c.1600-1668), Gabriel Perelle (1603-1677) or Nicolas Cochin (1619-1686), known as the elder; they do not, however, contain any biblical or mythological references.
However, if the interpretation of this scene remains a mystery to specialists and novices alike, it is nonetheless of rare beauty and is a perfect example of enamel painting in its early days, ... which were already at one of its peaks!
Biography

Watches with a case decorated with a similar scene (non-exhaustive list)
--
1) Movement signed by Elias Weckherlin, Augsburg, circa 1688-1689 (?). Case cover decorated with a scene depicting “The Farewell of Dido and Aeneas” (Ø 58 mm.).
Cover
Catherine Cardinal (1984) shows Dido, face weeping, followed by the same characters as in the background, resting her arm on the hand of her lover who is about to embark. Hans Boeckh (2009), on the other hand, depicts “The Abduction of Helen”. The subject is based on a work by Sébastien Bourdon (1616-1671) in the Musée des Beaux-Arts in Rouen (Inv. 964.2; oil on copper; Ø 28.5 cm.).
Localisation
Bibliography
2) Unsigned movement, modern replica. Case cover missing (Ø 59.4 mm.).

Provenance
Localisation
4) Movement signed David Margotin, Paris, circa 1640 (?). Case cover decorated on each side with two scenes from Greco-Roman mythology whose interpretation is also controversial (Ø 58 mm.).