Mahogany and gilded bronze, vertical rectangular-shape, key-winding, one-month going desk-clock, with centre-seconds beating the half-second and one horological complication:
· Hour and half hour striking on one bell
· Metallic thermometer according to the centigrade or Réaumur scale (aperture in the lower part of the cabinet with circle graduation; not considered as a horological complication) 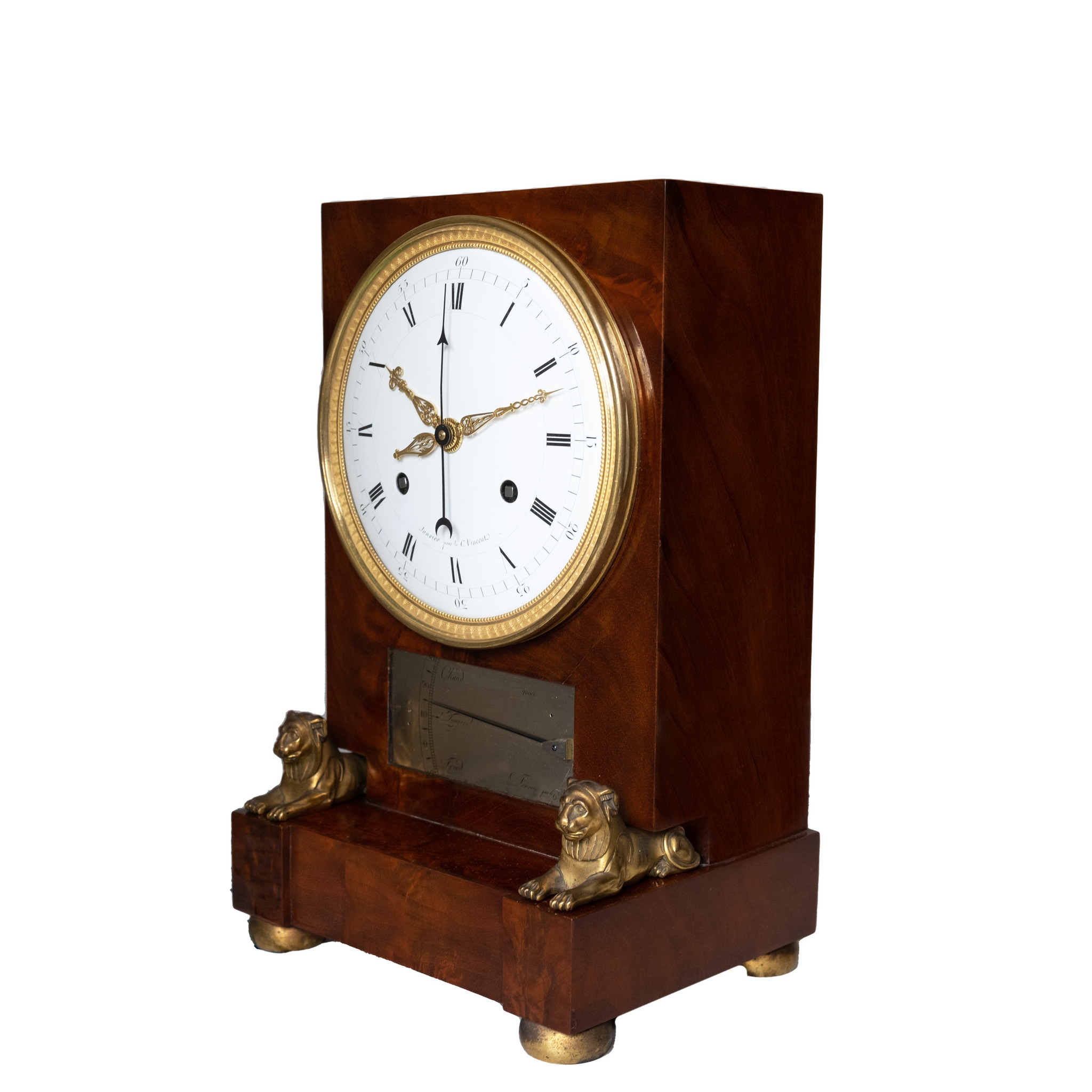 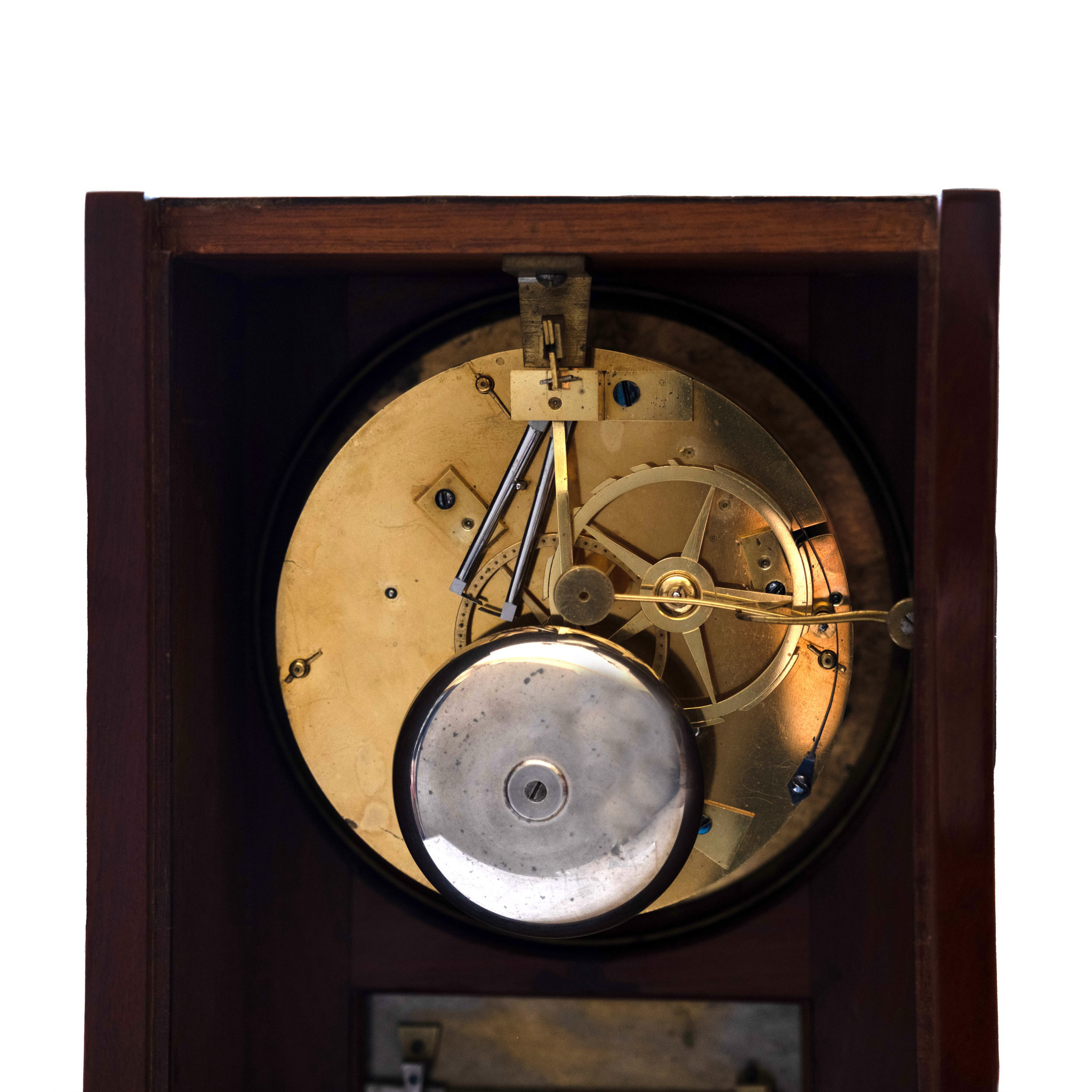 Although this clock by Antide Janvier is neither numbered nor dated (which is not unique in the work of this clockmaker), it can be dated to the very early 19th century. On the one hand, by the style of the cabinet, as the so-called “audience” clocks appeared in 1799. On the other hand, its month going movement is similar to No. 346 (dateable 1802) and No. 385 (dateable 1804), as well as to Nos. 402 and 403 (dateable 1805). It is not unlikely that our clock was originally fitted with a knife suspension.

The clock dial and the thermometer plate are dedicated by Antide Janvier to a person who appears to be the Colonel Vincent, then an officer of the engineering troops stationed in Paris at the Ministry of War, who had previously distinguished himself in Saint-Domingue near François-Dominique Toussaint Louverture (c.1743-1803).

Trained by his father, Claude-Etienne Janvier, he received lessons from Abbé Tournier who introduced him to mathematics and astronomy. In 1783, he obtained the protection of the Count of Provence, brother of Louis XVI; the following year, the King acquired two small planetary instruments and attached him to his service.

Its production is intended for an international clientele composed of rich amateurs and collectors eager for technical innovations.

Janvier worked with the best craftsmen of the time, both for the cases he commissioned from Ferdinand Schwerdfeger, Jean-Henri Riesener and Georges Jacob, and for his dials made by the enamelers Coteau and Dubuisson.

Parisian cabinetmaker received master on May 26, 1786. Author of one of the greatest masterpieces of French cabinetmaking: the jewel box of Queen Marie-Antoinette (Musée national du château de Versailles).

The cabinetmaker, who was only recognised too late, developed a collaboration with Antide Janvier for clock cases. Thus, at the death of his wife (1803), eight clock cases are mentioned in his workshop.

Schwerdfeger perfectly assimilated the Napoleonic artistic will which advocated a sober style where mahogany and gilded bronze decoration triumphed. It was in this context that the cabinetmaker became Janvier’s favourite supplier, who owed him 150 francs at his death in 1818.

Both collaborated in particular on the “geographical” or “departmental” clock (Musée national du château de Fontainebleau) and the no less famous clock with a moving sphere and planisphere known as the “chef-d’œuvre astronomique” (astronomical masterpiece; private collection).

French officer of the Revolution and the Empire; he served mainly in the engineers (1773-1815).

Charles-Humbert-Marie Vincent entered the Royal engineering school of Mézières (Ardennes) on January 1st, 1773; he graduated as first-lieutenant on January 18, 1775. In 1779, he carried out a mission on the borders of the Jura and Switzerland. He received his captain’s commission on March 23, 1786, and was sent to Saint-Domingue on April 14, 1786. He returned to France in 1791 and was made a Knight of Saint-Louis on January 1st, 1791.

On February 23, 1796, he was raised to the rank of brigadier and on March 23 was sent back to Saint-Domingue, as general director of the fortifications of the Leeward Islands (Iles Sous-le-Vent). Back in France in December 1797, he returned to Saint-Domingue on September 29, 1798. He returned to Lorient on November 2, 1799, and was assigned to the Ministry of War.

In 1801, he carried the constitution drawn up by François-Dominique Toussaint Louverture (c.1743-1803) and advised the First Consul against the expedition to Saint-Domingue, but his advice was not heeded.

On January 29, 1803, he was placed in Amiens, as director of fortifications, then moved to Bayonne, with the same function. He was made a Knight of the Legion of Honour on December 11, 1803, and an Officer of the Order on June 14, 1804. He was then colonel of the engineers.

In 1807, he was appointed chief engineer of the Portuguese army, under the command of General Jean-Andoche Junot (1771-1813). After the capture of Lisbon on December 1st, 1807, and the conquest of Portugal, he was charged with providing for the defence of the conquered places.

He married a Creole landlady from Saint-Domingue.