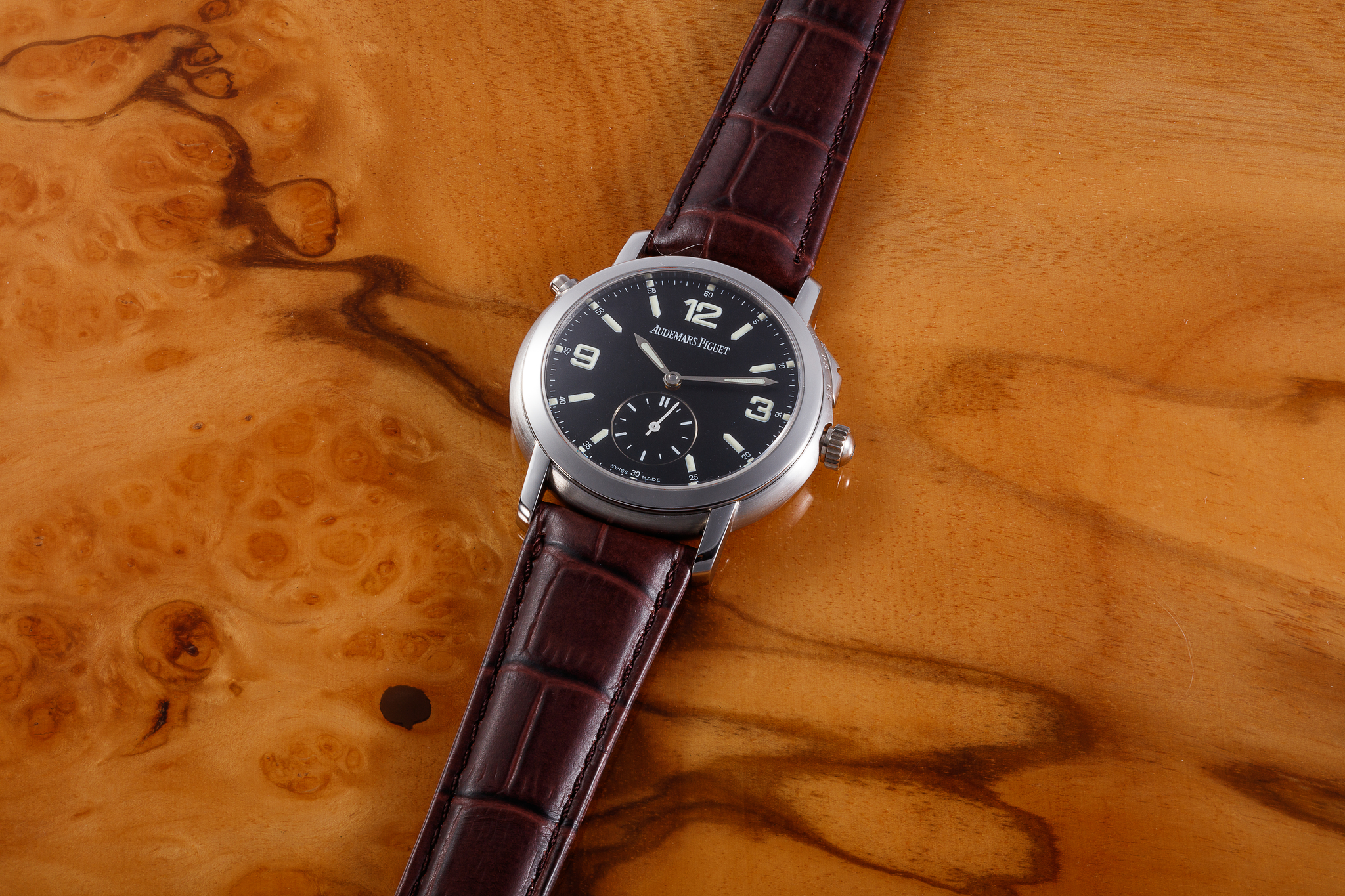 The certificate mentioned that this watch was sold on October 20, 1997. Audemars Piguet, "Grande et Petite Sonnerie au passage et Répétition des quarts" Limited editions made at the end of the 1990's and during the 2000's, including: 50 pieces in pink gold (Ref. 25 750 BA), starting in 1997; Less than 5 pieces in platinum with diamond-set bezel and dial; A unique piece in stainless steel (the present lot). When the "Grande et Petite Sonnerie au passage et Répétition des quarts" was created during the 1990's, for almost 120 years, complicated watches from Audemars Piguet have been an ongoing source of astonished and fascination. In 1885, Jules-Louis Audemars (1851-1918) and Edward-Auguste Piguet (1853-1919) created their first "Grande Sonnerie" pocket watch. Over the years, the master watchmakers of the Manufacture have perfected the art of fashioning this type of model. In 1990, drawing on the know-how handed down from generation to generation, they were able to totally recreate a "Grande Sonnerie" pocket watch. Four years later, they have gone a step further in producing the "Grande Sonnerie" wristwatch with hour and quarter repeater and subsidiary seconds at 6 o'clock. The very first of its kind to house a miniaturised movement, it's living proof that their master watchmakers continue to exercise their craft in accordance with the philosophy of the two company founders: "innovation in harmony with tradition". Three years of work and over 1 000 scale drawings were required in order to arrive at the final version. In addition to being a world premiere, this watch represents a significant watchmaking achievement. Its miniaturised, manual winding movement, Cal. 2868, comprises overs 410 part within a diameter of 28.6 mm. and a total HEIGHT of 5.2 mm. its hand-finished mechanism is fitted with 51 ruby bearings to ensure accuracy and long life. The "Grande Sonnerie" was designed using technology and crafted in harmony with the highest standards of the watchmakers' art. The wristwatch has a "Grande Sonnerie" and "Petite Sonnerie" switch making it possible to strike "en passant" (in passing), the hours and the quarters or only the hours. The two "Sonneries" strike in passing automatically. The "Petite Sonnerie" only strikes the hours while the "Grande Sonnerie" strikes the hours and the quarters. Moreover, a silent governor eliminates the noise of the mechanism during striking. The "Petite Sonnerie" has an autonomy of around 32 hours, while that of the "Grande Sonnerie" range from 8 to 10 hours, The "Sonnerie" may then be simply rewound by turning the crown clockwise. The striking mechanism functions independently of the movement and cannot be thrown out of order. Thus, when the autonomy of the "Sonneries" is exhausted, simply rewinding the mechanism will ensure they automatically strike the correct time. The push-button at 10 o'clock releases on request the striking mechanism for the hours and quarters. Later, in 2002, Audemars Piguet introduces the "Jules Audemars, Grande Sonnerie Carillon" (Ref. 25 825), made in a limited edition in pink gold and in platinum. The minute repeater carillon is a mechanism of great complexity which strikes the hours, quarters, and minutes on request. These indications are obtained by 3 hammer strokes on different gongs: a low pitched one for the hours, a high pitched one for the minutes, plus one of intermediate pitch. Used in conjunction with the others, this last one provides a carillon effect on the quarter hours. The striking power is precisely calculated to achieve subtle balance. If too strong, it would muffle the sound; if too weak, the sound would be inaudible. With a long tradition of producing highly complicated repeaters, Audemars Piguet developed the first minute-repeating mechanism for a wristwatch in 1985. During movement assembly, the watchmaker has to hand-finish many of these components to achieve the desired result. This time-consuming process involves constant testing, yet is necessary for the harmonious interaction of the numerous components. While minute repeaters chime hours, quarters and minutes on 2 gongs with 2 hammers, the "Jules Audemars, Grande Sonnerie Carillon", will chime the quarters with 3 hammers on 3 gongs, adding a further tone to the "ding-dong" enchanted connoisseurs are so familiar with. Each of these pieces represent a veritable "tour de force" of watchmaking Art and can be considered as a "milestone" in the history of the 20th century wristwatch. Having been made of steel, this unique piece of 1997, with its "military"-type dial is actually ahead of its time a generation! It was probably made on special order for an important person in our World.