Polychrome paintings on enamel on gold, by an unidentified Genevan workshop, showing each a tracery of multicoloured summer flowers and leaves on an azure blue backgrounds; enamelled case-bands, pendants and bows; bezels, pendants and bows set with half-pearls. 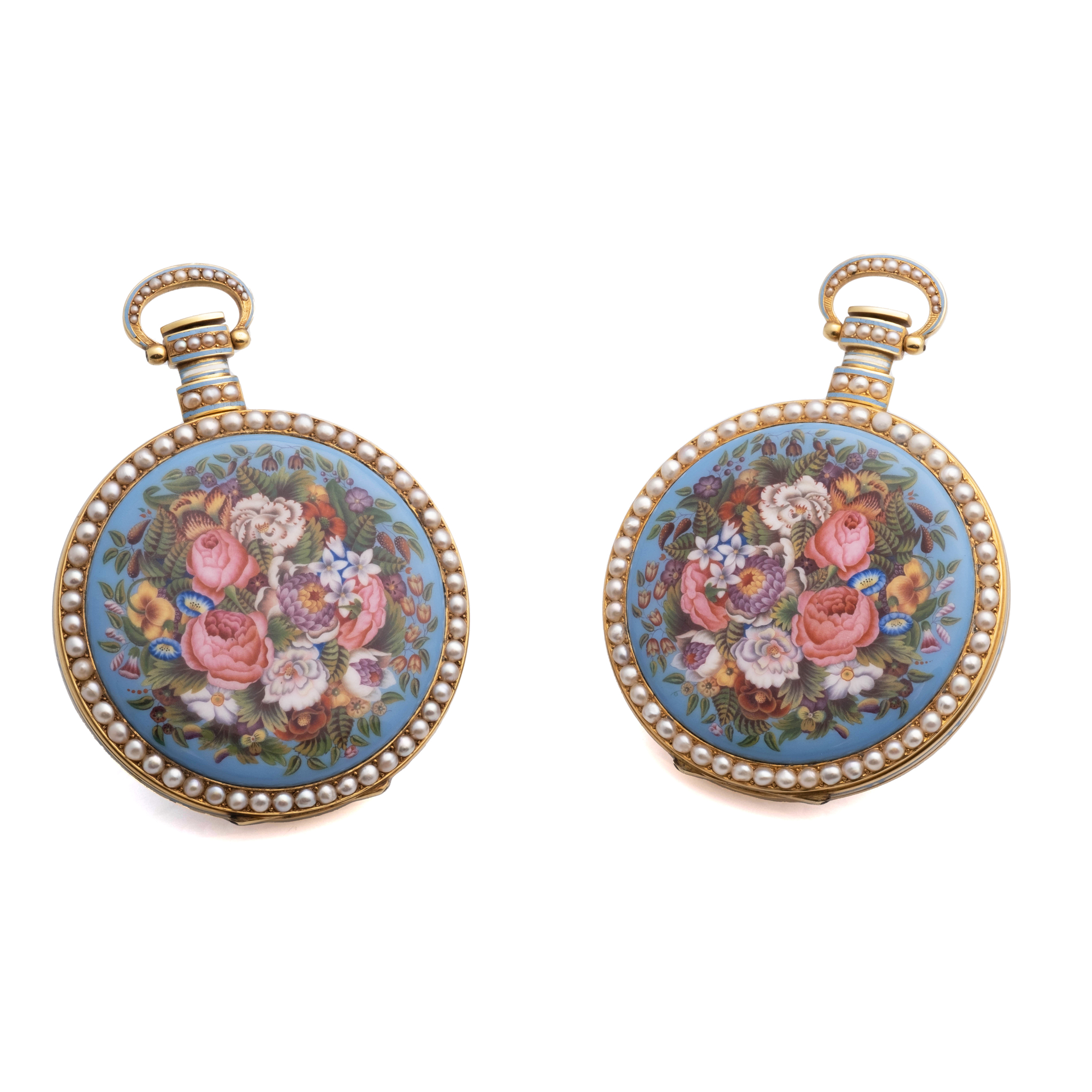 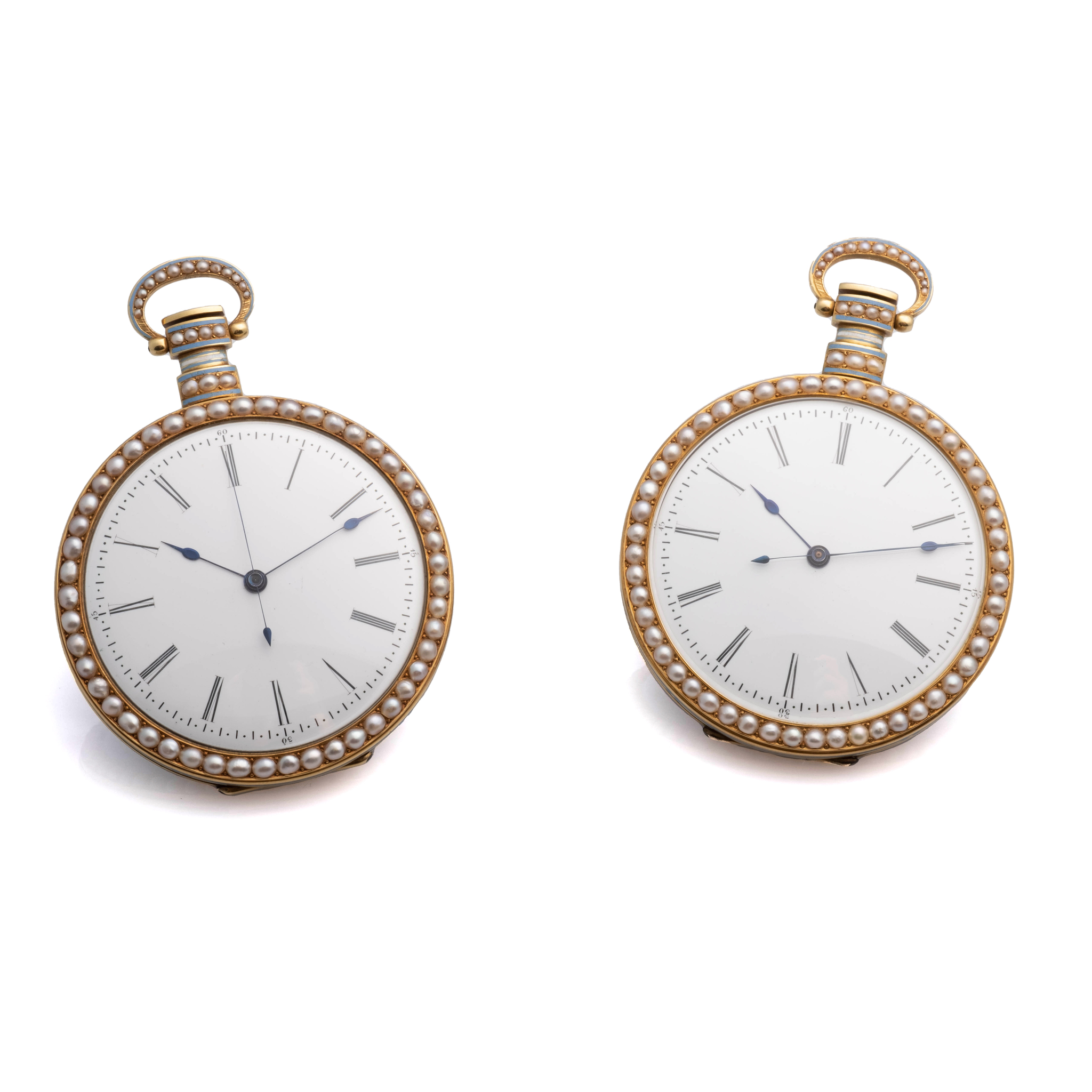 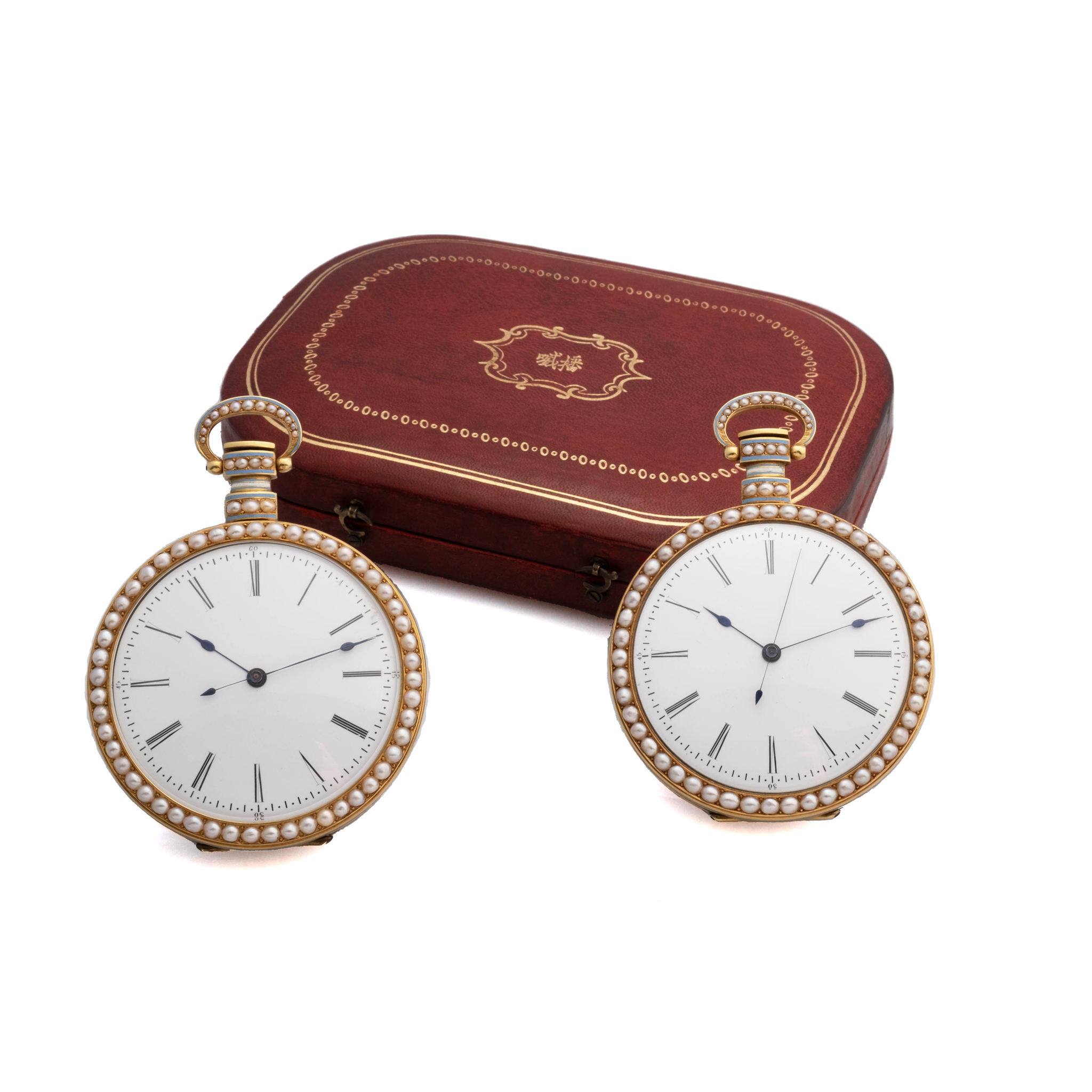 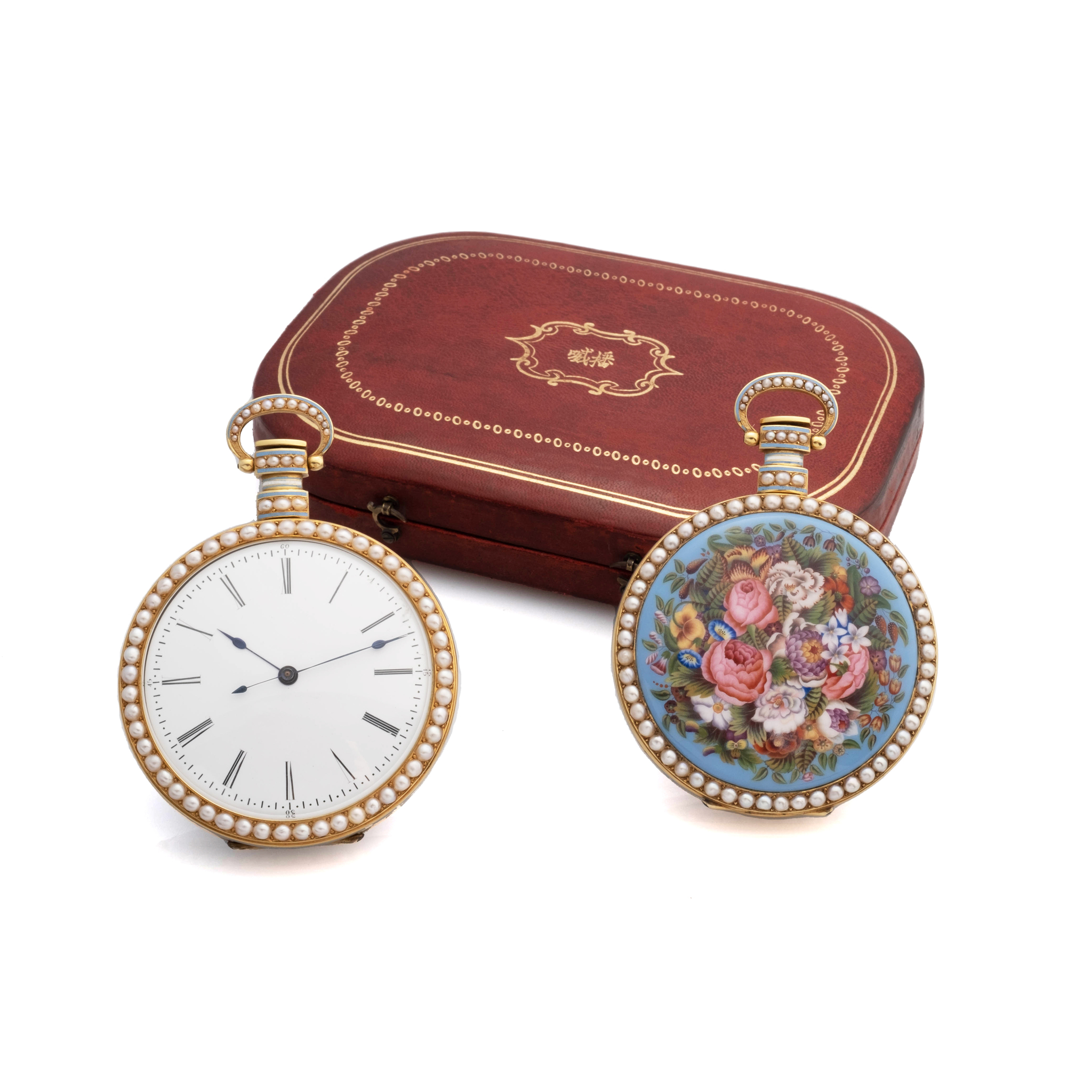 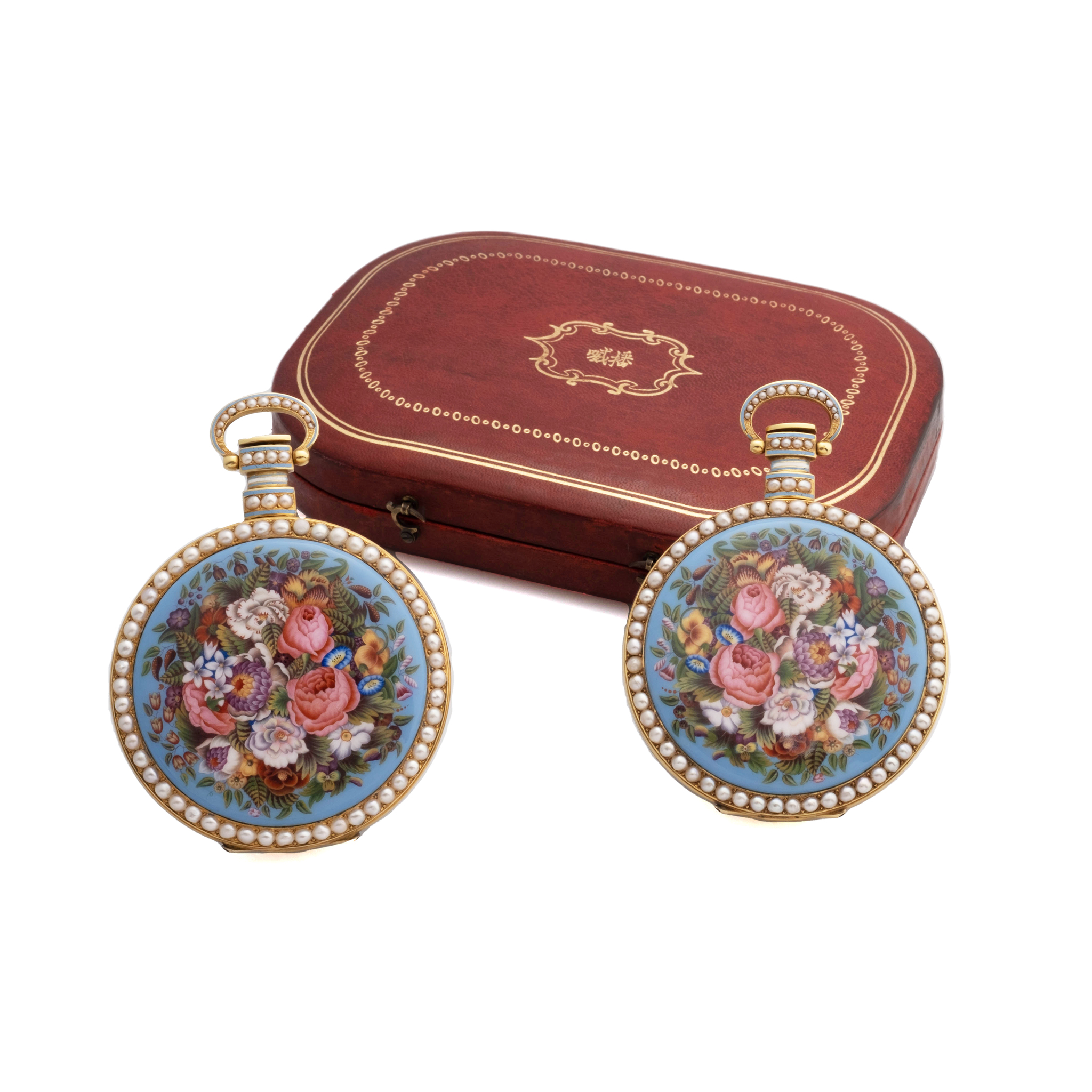 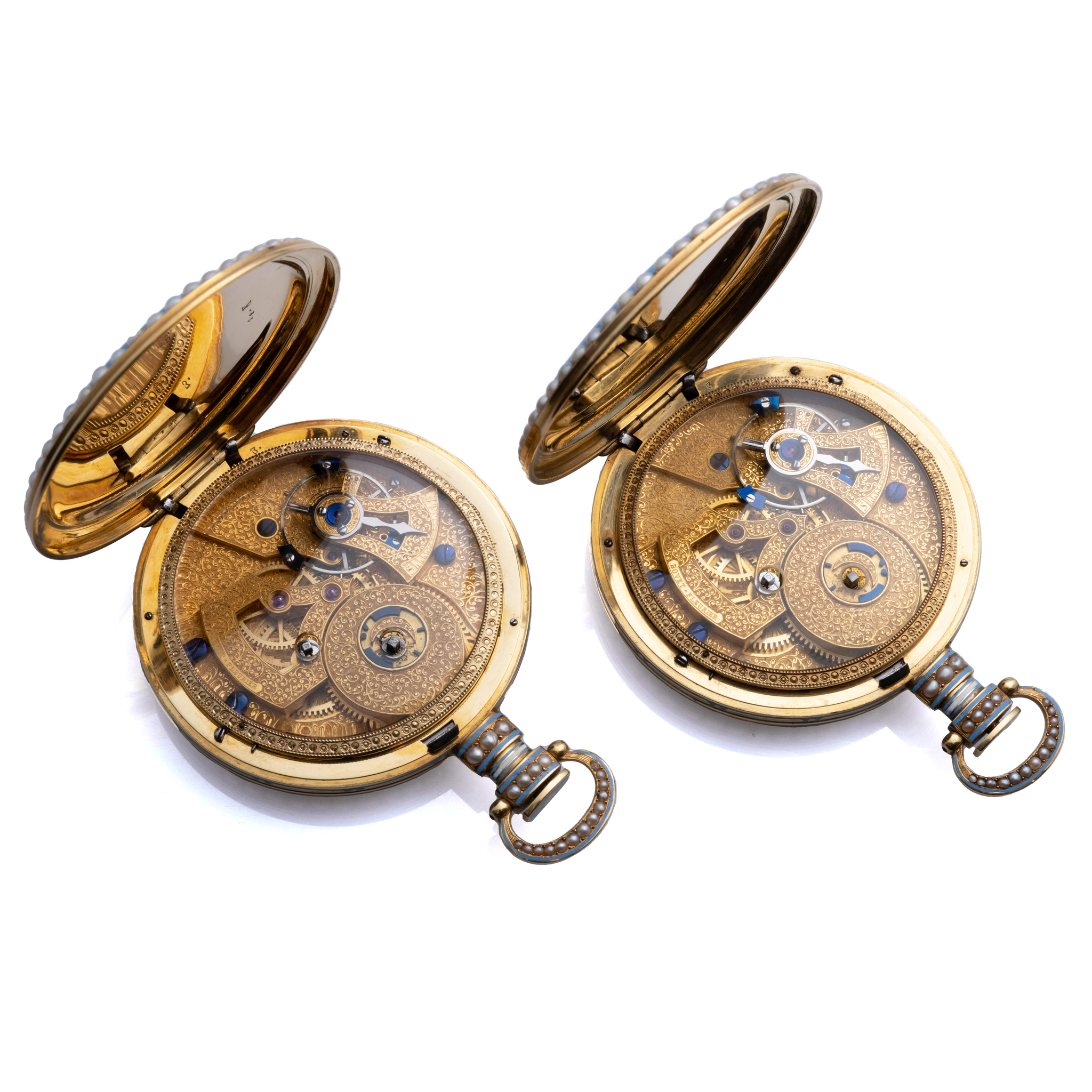 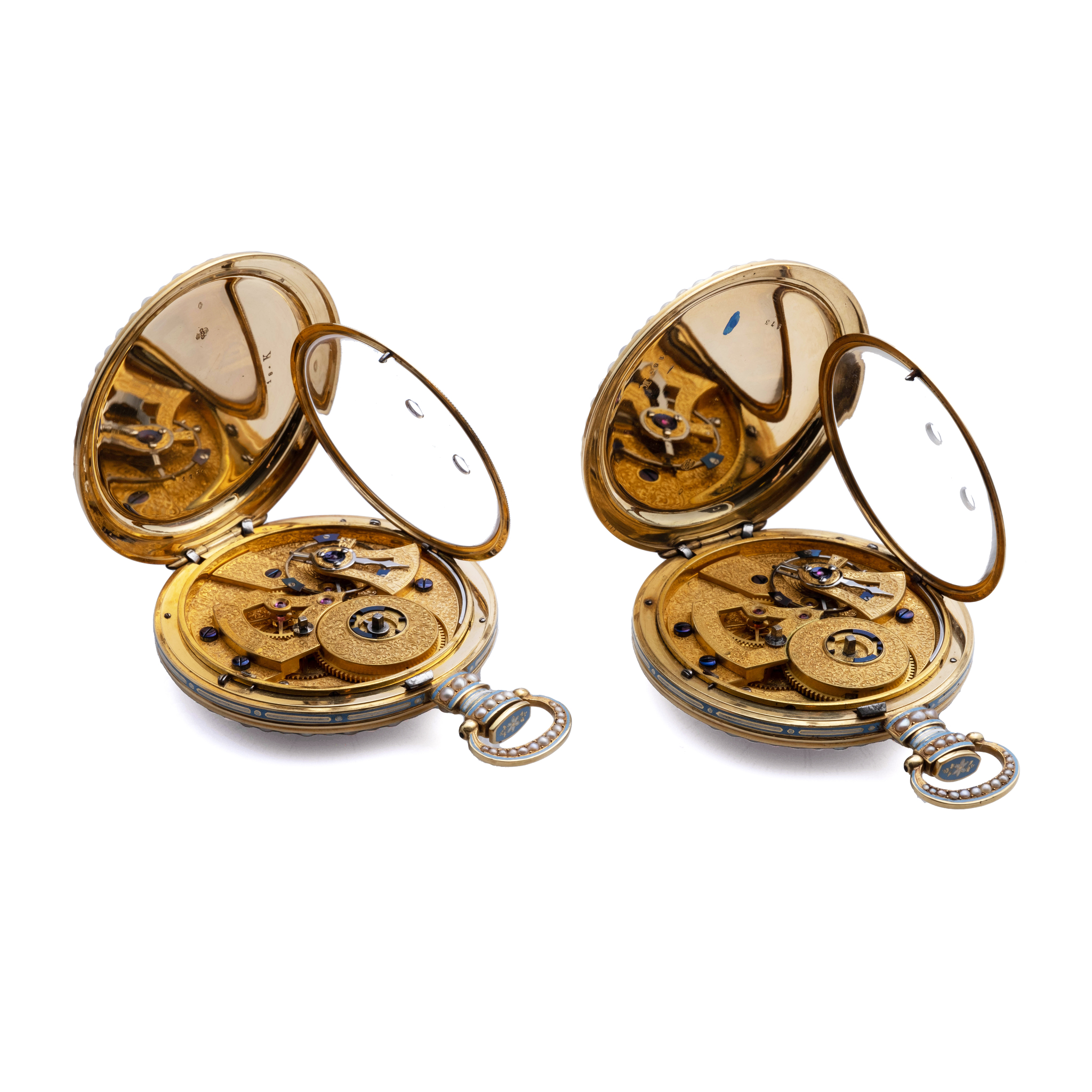 Characteristic of the production of Val-de-Travers watchmakers, the numbering of pairs of watches is generally identical, except that second piece of the pair has a dot.

Flowers bouquets, with or without couples of doves, are subjects often seen in the work Val-de-Travers watchmakers.

The three brothers, Frédéric, Alphonse and Edouard, first set up a business in London in 1814-1815, making watches for the local market. In 1818, Edouard was hired by the Maison Magniac to be a watchmaker for them in China, in Canton.

Thus, at the age of 21, on April 20, 1818, he embarked aboard the Orwell, of the East India Company, the fastest ship of the moment. On August 16, 1818, the Orwell anchored at the Tiger Gate after “un voyage assez pénible et le plus court qui ait jamais été fait” (a rather painful and short trip that has ever been made); a journey of 119 days.

Edward notes in his logbook: “On ne peut pas se faire une idée de la quantité de bateaux qui se trouve dessus cette rivière, tout ce peuple vit dessus l'eau, car il n'y a pas assez de place dessus terre ; la rivière est plus large que la Tamise par place. Canton est une vilaine ville [...], tout est vilain et puant...” (One can’t get an idea of the quantity of boats on this river, all these people live on the water, because there is not enough space on the ground; the river is wider than the Thames by place. Canton is a nasty city [...] everything is ugly and stinky…).

In few years, having realised the great possibilities of the Chinese market, the Bovets established their own company. On May 1st, 1822, Edouard, remaining in Canton, signed with his brothers Frédéric and Alphonse, working out of London, and Gustave, out of their home town, Fleurier, a partnership contract for the export of watches from London. The youngest Bovet brother, Charles, later joined the company as well.

Edouard Bovet notes that not only mandarins but all of the Chinese are fond of watches. He wants to sell quality watches at affordable prices to the rest of the population who are often neglected by the luxury market.

Fleurier becomes the manufacturing centre of the “Chinese watch”. The Bovets boosts the economy of Val-de-Travers; in 1840, no less than 175 watchmaker workshops worked for the Bovets in Fleurier, Saint-Sulpice and Bayards.

The Bovets are the first to write their name in Chinese on watch dials. The brand becomes so famous that the word “poway”, whether “bovet” according to the Chinese pronunciation, becomes synonymous of “watch” for the Chinese. Among the signatures on these watches, one often finds the name Bovet translated into Chinese, as well as the name “Tevob” (“Bovet” spelled backwards).

In 1830, Edouard left China, returning to Fleurier with his “Chinese” son Edouard-Georges (1826-1894), born of a Chinese mother, after having become a very rich man in the Orient. Edouard – who is nicknamed Bovet-de-Chine – following his participation in the liberal insurrections of 1831, must go into exile in Besançon (Doubs, France) and relocate part of his industry. On September 25, 1847, he married in England, in Middlesex (London), Constance Ellen Meunier (1815-?), originally from Pontarlier (Doubs, France). He will return to Fleurier only in 1848 after the establishment of the Republic following the Revolution of March 1st, 1848, in Neuchâtel, that ended the reign of the King of Prussia on the Principality of Neuchâtel. He died one year later.

In 1864, the Bovet watch production was sold to Bovet’s manufacturing inspectors in Fleurier, Jules Jéquier and Ernest Bobillier, soon joined by Ami Leuba.

In 1888, Bovet Frères was founded under the direction of Alexis Landry, who served his apprenticeship in Fritz Bovet’s workshop in Fleurier, still producing ebauches for Chinese watches and silver cases. Alexis Landry formed a partnership with Albert and Jean Bovet, specialising in complicated watches and chronographs.

In 1901, the Bovet trademark was acquired by César and Charles Leuba, sons of Ami Leuba.

In 1918, Jacques Ullmann & Cie of La Chaux-de-Fonds bought the Bovet brand from Leuba brothers, and in 1948, Favre-Leuba took over the company and acquired the first production plant.

In 1966, Favre-Leuba sold the Fleurier plant, and in 1989 Michel Parmigiani acquired the Bovet name. A limited company registered as Bovet Fleurier S.A. was formed in 1990, using the Bovet trademark.

In 1994, Roger Guye and Thierry Oulevay (1956-2013) bought Bovet Fleurier S.A. and opened a branch in Geneva. Pascal Raffy became the majority shareholder and President in 2001.

Today, Bovet 1822 timepieces are widely available in the world’s major destinations. Eager to maintain its historical roots in the Far East, the company has subsidiaries in Hong Kong and Japan, and delivers its collection to select distributors in Singapore, Taiwan, the Middle East, Turkey, Russia, the United States, London, and Geneva.