C. Double body by Joly, No. 523, engine-turned "a grains d'orge", the back centred with a small Royal crown. D. Silver engine-turned by Tavernier with Roman numerals on a polished chapter ring, sunk subsidiary seconds and 60 hour up-and-down scale. Blued steel Breguet hands. M. 2F", gilt brass full plate with cylindrical pillars, the back plate relieved for the escapement, two going barrels wound by means of a self-winding oscillating ogival platinum weight, pivoted on the edge of the back plate and locked automatically by a rising pawl when spring are fully wound, or at-will by means of a small lever on border of the back plate, the banking springs attached to the interior of the case. Five wheel train with an intermediate wheel to enable a 60 hour going period. Straight line lever escapement without draw, the fork with vertical pins. Bimetallic three-arm compensation balance, the two segments of the rim with the timing weights threaded onto the ends, in the manner of Arnold and conventional poising screws, pare-chute suspension on both pivots. Blued steel helical balance spring with regulator adjusted by a rack and micrometer through the edge of the gilt brass dial plate. Dumb quarter repeating on the edge of the case by a single hammer with pull-twist piston through the pendant. Accompanied by Breguet certificate No. 3847. Diam. 54 mm. 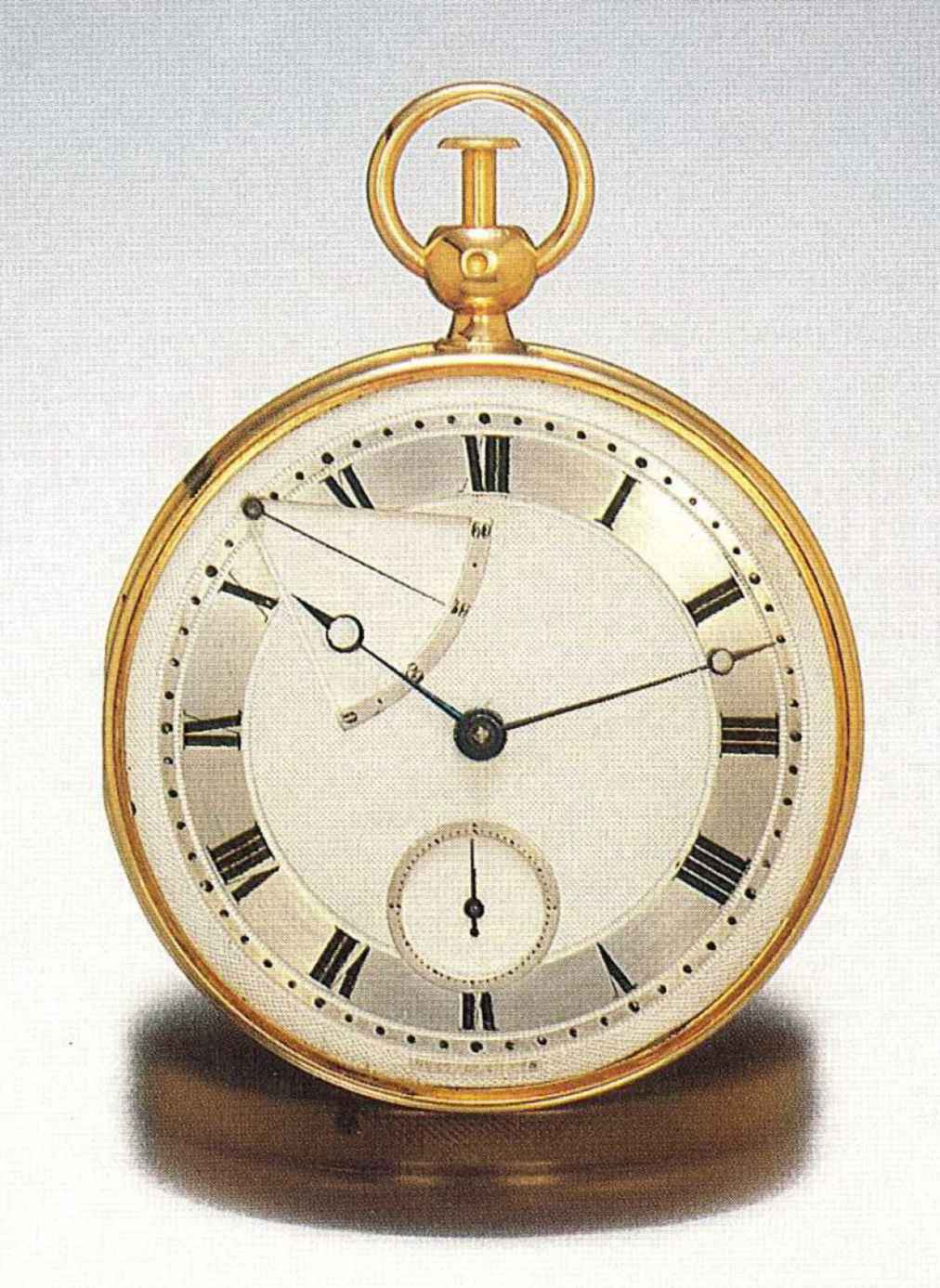 History: Begun before Breguet went into exile during the Revolution, (unfortunately the relevant page in the fabrication books is lacking), this watch was first sold under the No. 122 on 11 Prairial An 12 (31 May 1804) to Mgr. Desbarolles, for 4464 Francs. Bought back from Mr. J.C Meyer on 12 April 1816, for 3600 Francs, it was completely restored and resold on 6 January 1818 to Prince Wolkonsky for 4800 with the new serial number 3175. Bought back from Prince Wolkonsky on 7 July 1823, for 3500 Francs, it was once more restored and resold on 10 November 1829 to Comte Merystas Potocki, for 4000 Francs. Bought back on 31 January 1831 for 2800 Francs, it was resold to Prince Paul of Wurtemberg on 10 May 1833, as is confirmed by Certificate No. 1371. Note: This watch is a very good example of the long and somewhat complicated history of Breguet's major watches. Their cost of production was so high and they were so praised that they were often entirely restored, sometimes fitted with a new case and the original white enamel dial replaced by a silver engine-turned one. Many of these important pieces such as this watch, were bought back by Breguet several times and resold once renewed under a new serial number. Breguet himself never claimed to be the inventor of the perpetuelles (the name he gave to his self-winding watches), the earliest having been produced in Switzerland by Abraham Louis Perrelet in approximately 1770; but these very early one were unsuccessful clue to the inadequacy of the winding system, which virtually required the wearer to run, in order to keep the movement sufficiently wound. Breguet's design was revolutionary by comparison, and incorporated several new "inventions" that were well ahead of their ti me: two barrels to enable lighter mainsprings to be used, a carefully balanced "weight" reacting to the slightest movement, and an additional train wheel to provide a going-period of up to 60 hours. The result was a watch that could be used by somebody leading a relatively inactive life, needing only a short time to recharge itself sufficiently to continue working, and could be left unattended for more than two days. The majority of his perpetuclles watches, even from the first series, were constructed on the principle of the garde-temps, with the main pivots jewelled, a detached escapement, and the balance with temperature compensation and pare-chute suspension (shock protection) on both pivots. Furthermore, they were fitted with quarter or even a minute repeating mechanism, power reserve indicator, and in some cases phases of the moon dial. Most of these innovations were unknown in France at the time, and until the invention of the wristwatch were considered as the ultimate refinements to be incorporated in an automatic watch. It is therefore little wonder that the introduction of such a watch brought much fame to its creator, with the majority being purchased by the most notable people of the clay. Unfortunately perpetuelles watches were extremely expensive to make, taking up to two years to complete, and after finishing the initial series, Breguet made no more until about 1815. Literature: Described and illustrated by Emmanuel Breguet in his book: Breguet Horloger depuis 1775 - Vie et posterite de Alrrahana-Louis Breguet. Alain de Gourcuff Editeur, Paris, 1997, p. 218.