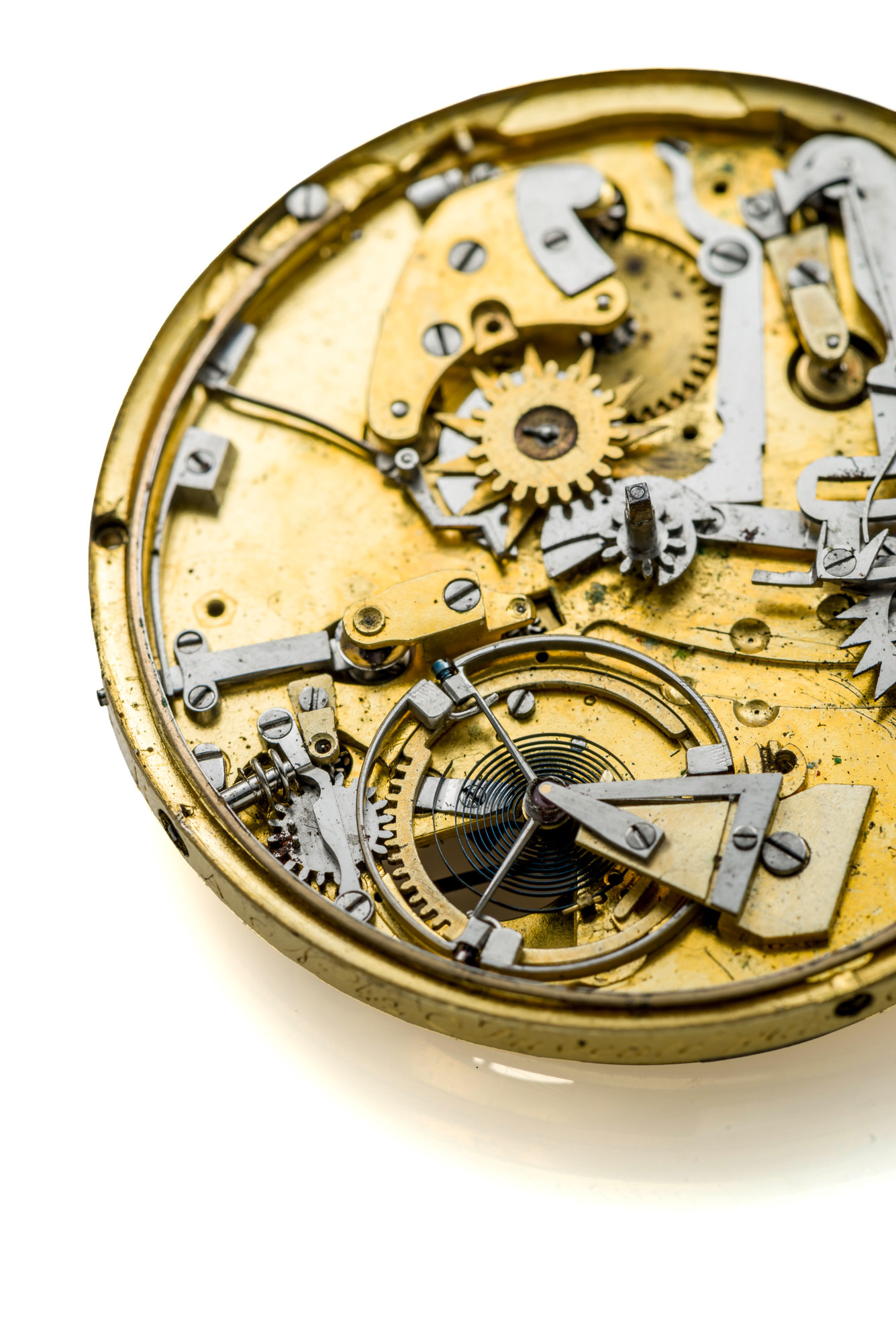 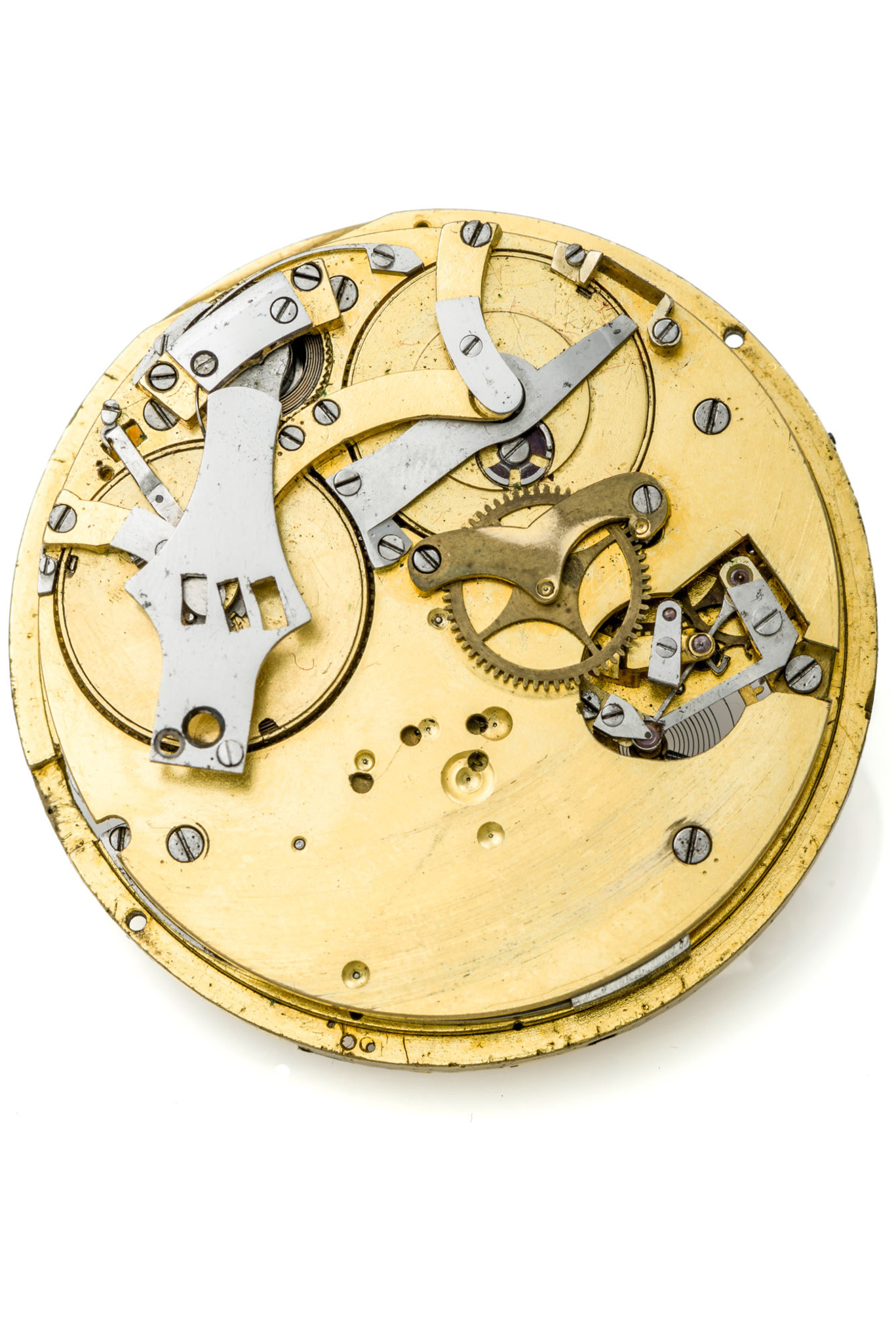 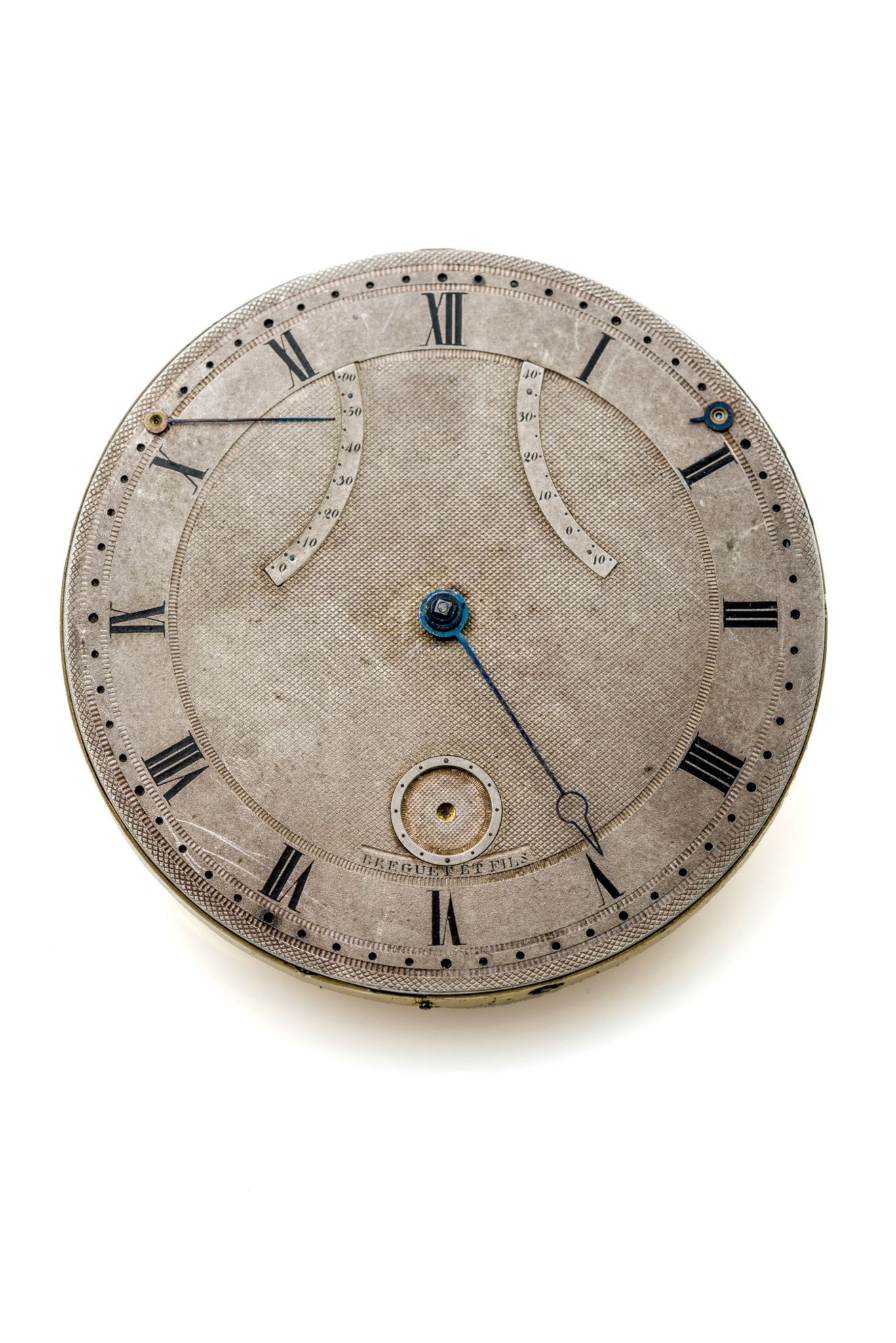 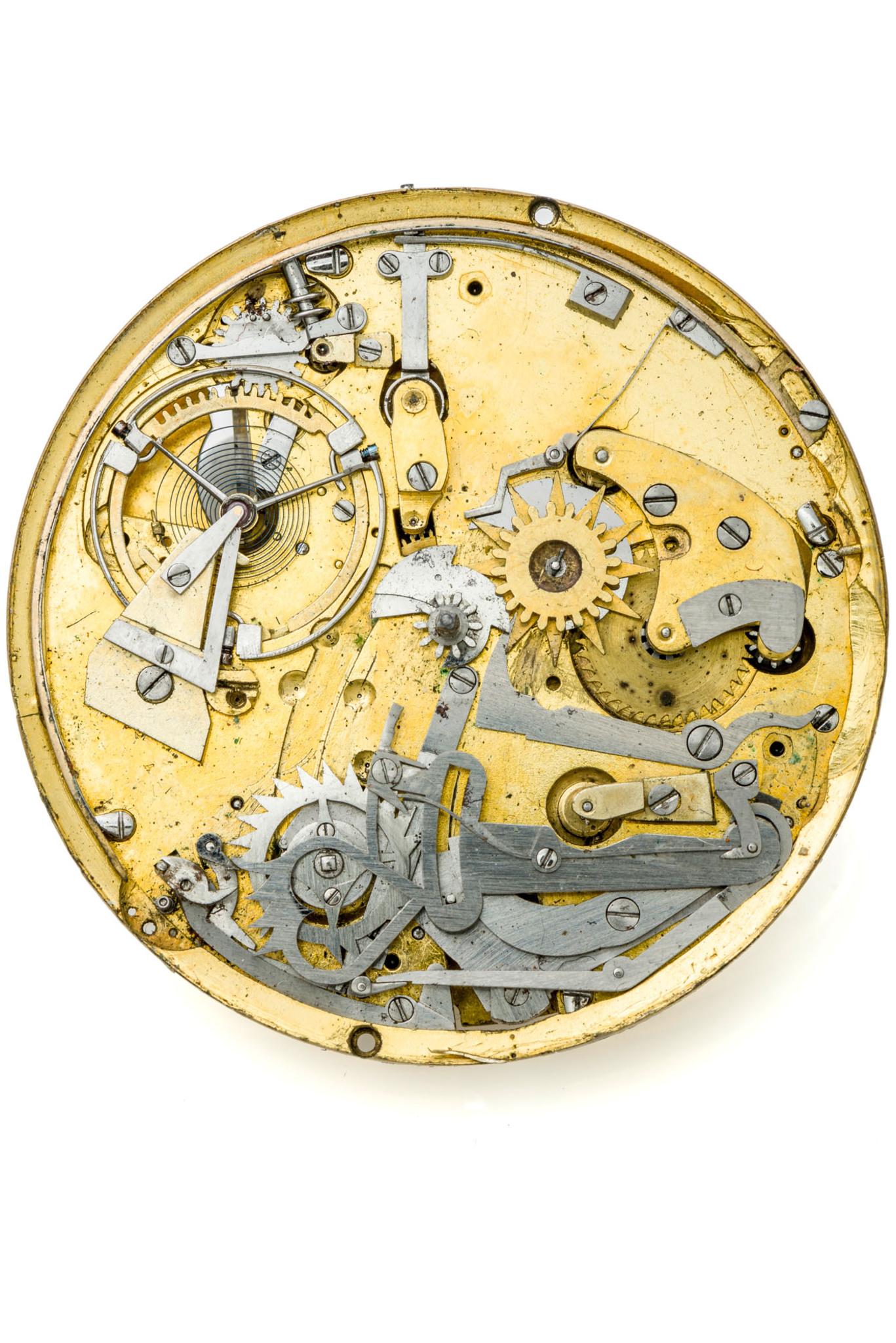 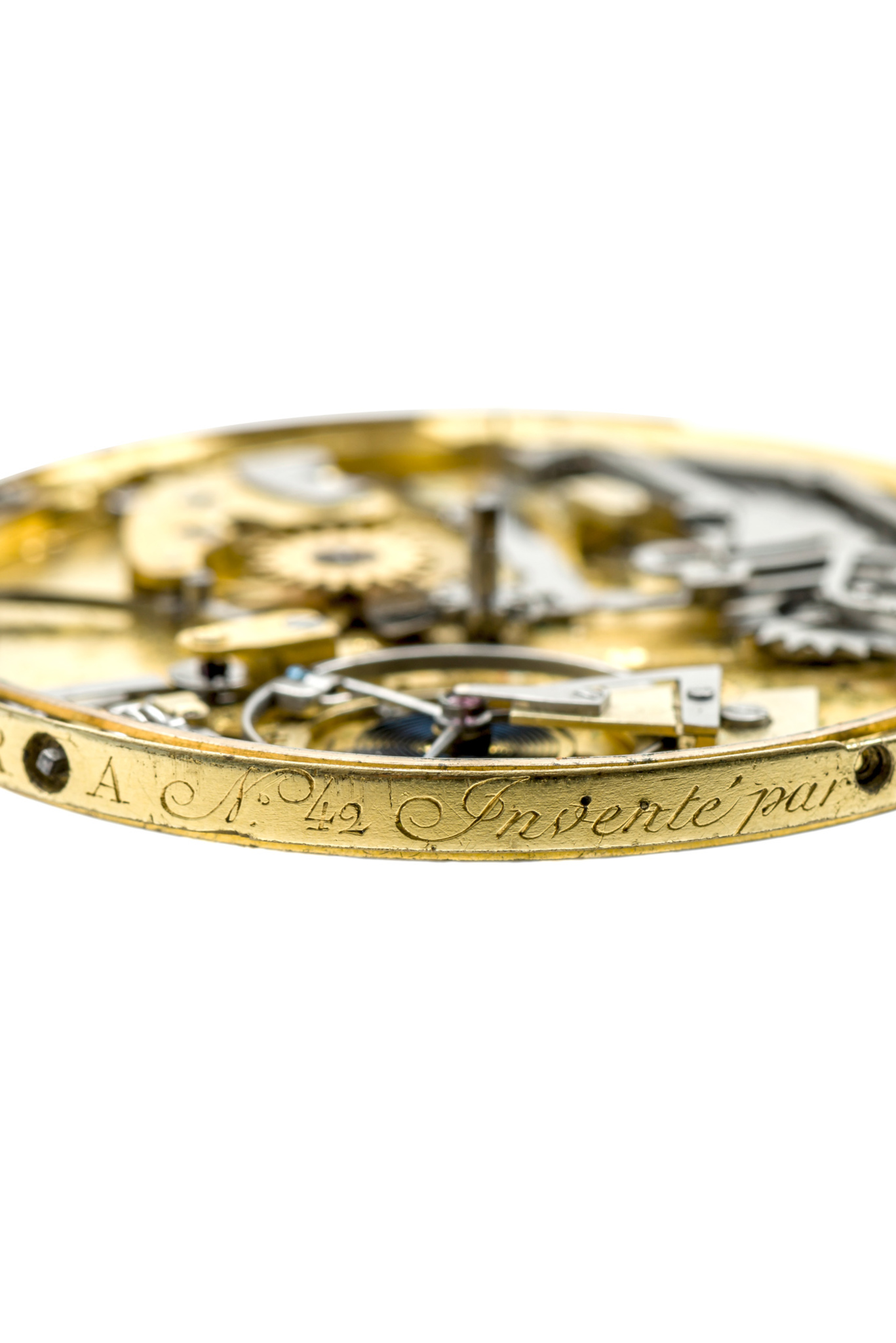 A fine and extremely rare brass movement. In good overall condition (in need of restauration).

The movement of this watch, partially incomplete, No. 42 of Abraham Louis Breguet, is mentioned by him as being completed in August 1786. This watch is therefore one of the first self-winding movements, so called 'Perpetual of the history of watchmaking', that made the reputation of Breguet. These watches are very much sought after by collectors and are well documented by George Daniels, Emmanuel Breguet and Jean Claude Sabrier. The movement presented here has two barrels. In the evolution of the self-winding movement, this improvement that seems to be credited to Breguet, allowed him to obtain a better mechanical efficiency of his timepieces: the division of the strength of the oscillating mass on two barrels helped to reduce the wear of the mechanism which was a big issue in early timepieces. In the Breguet archives, 2 watches bearing No. 42 appear in their "livre d'etablissement" that contains part of the first 220 watches made by the firm. The information is mainly concerning those made between 1787 and 1792, a period marked by the French revolution that pushed Abraham Louis to exile himself to Switzerland. In this register it states '7-42, perpetual calendar with repeating with free escapement, April 30th 1787, case No. 2467'. This implies that this self-winding watch with quarter-repeating, bearing the number 42 was reconstructed based upon the watch No. 7. It was sold in 1787 probably bearing the case number 2 467. Not long after, one can find another number 42, repeating watch with virgule escapement sold to Monsieur Noisseuly 4th June 92, 1000 tt. In the first sales book of Breguet, one can find further interesting information about these pieces. One can notice under watch No. 42, a repeating watch on gongs and the mention of the 'watch No. 42. perpetual calendar repeating pocket watch with thermometer and silver dial', this watch was clearly made here, but we have no traces in our books; the watch seems to have been made in 1786 and a certificate of origin was made in June 1856. It was sold to Recordon London in 1795 for 700 F. In Breguet's production it is not the first time that a watch was found bearing the same case number such as this example for number 42. One of the 2 watches, there is the repeating watch sold to Recordon for the amount of 700F and the other, a self-winding quarter-repeating with silver dial, a 60-hour power reserve and thermometer which is the movement being offered here. The original case as well as the oscillating masses (probably made of gold) having been lost over the years are no longer present. The dial on our movement is made of silver and bears on the reverse the number 651 and the letter R. This type of watch was then sold by Breguet for amounts varying between 2'000 and 4'000 francs at the HEIGHT of his pre-revolutionary production. The dial is signed Breguet & Fils, meaning that the watch was probably transformed by Breguet circa 1810-1830, which was often the case at the time (when watches were often modernised by the firm, originally this watch would have been born with an enamel dial). A rare opportunity to acquire one of the first ever-made self-winding movements made by Abraham Louis Breguet.