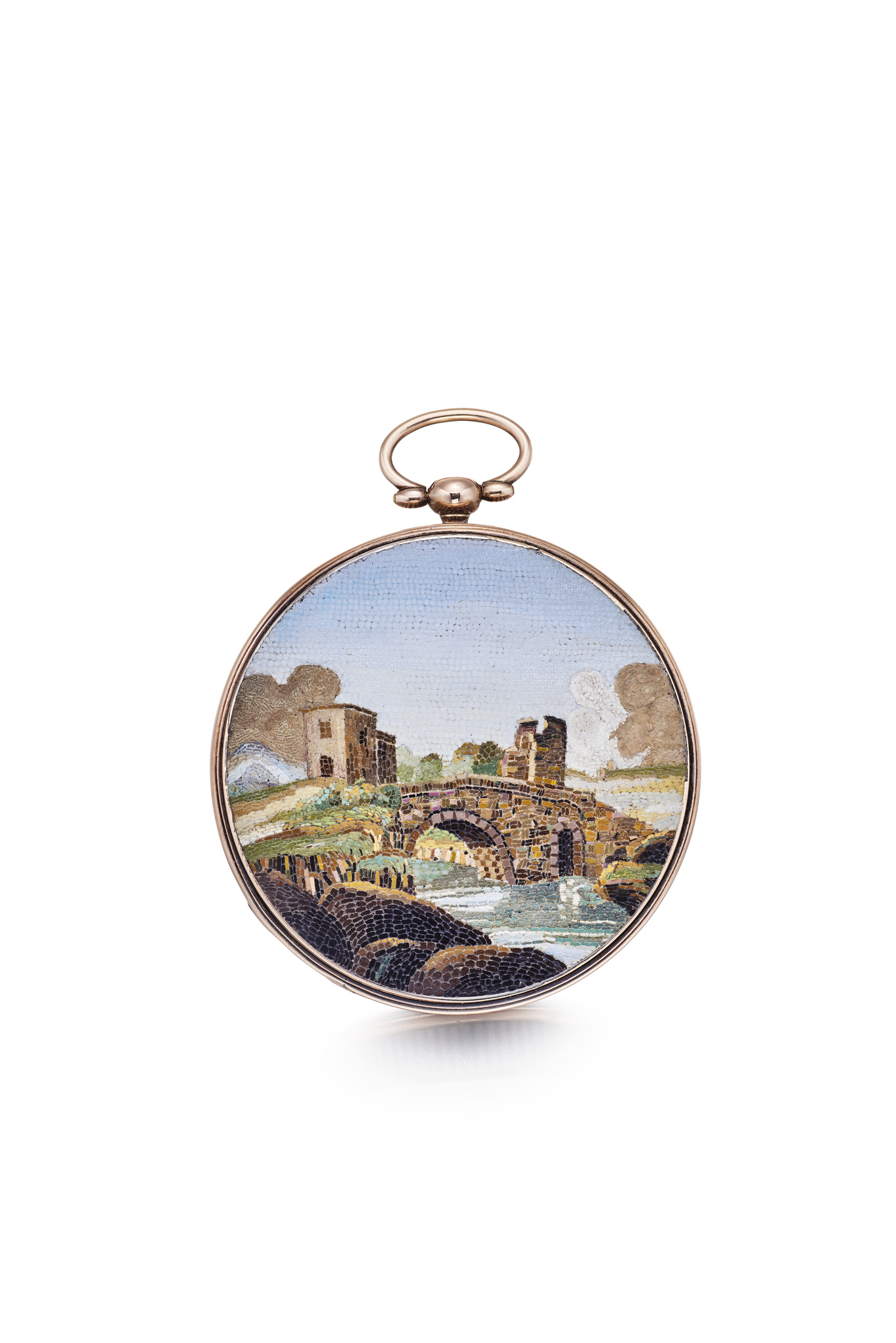 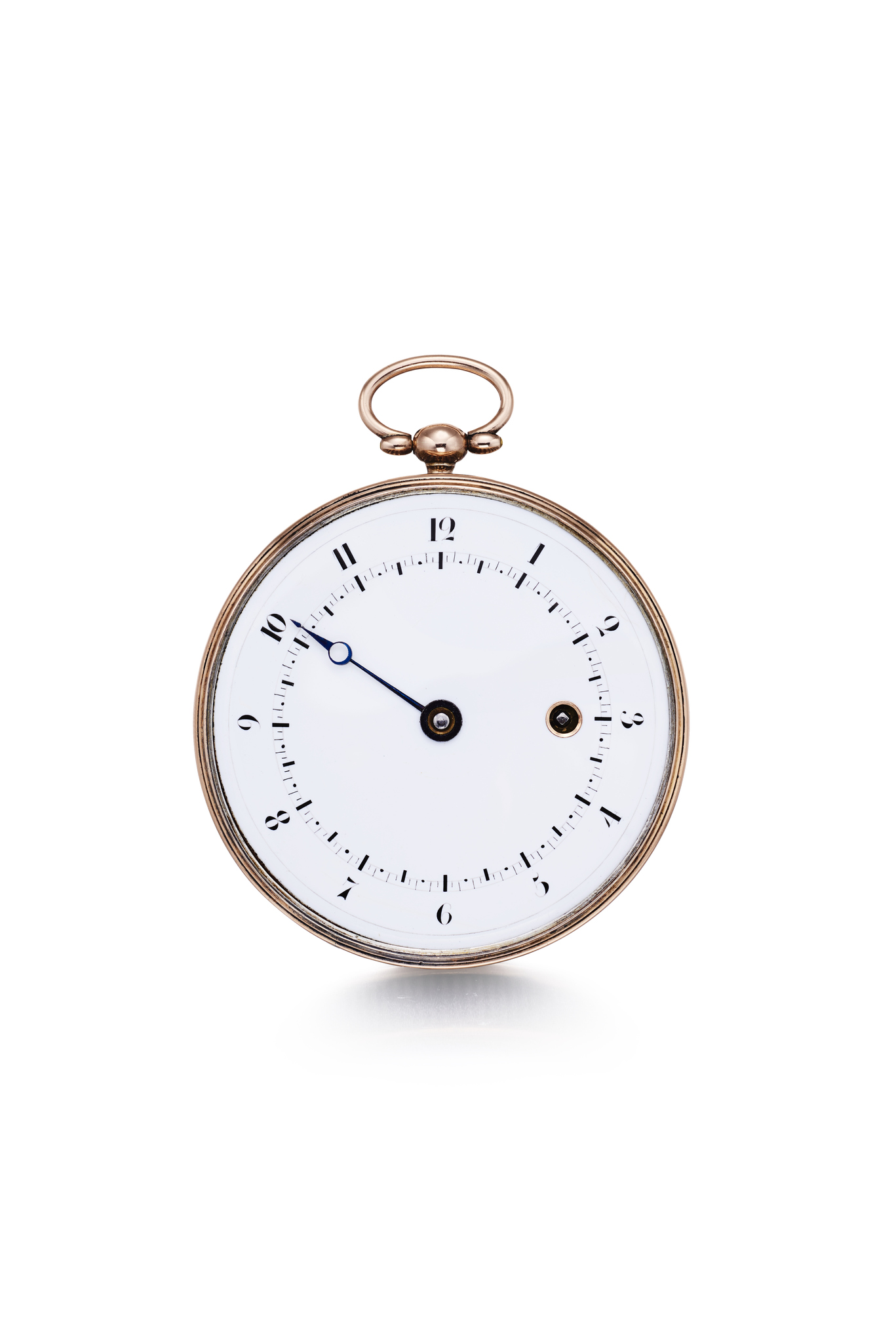 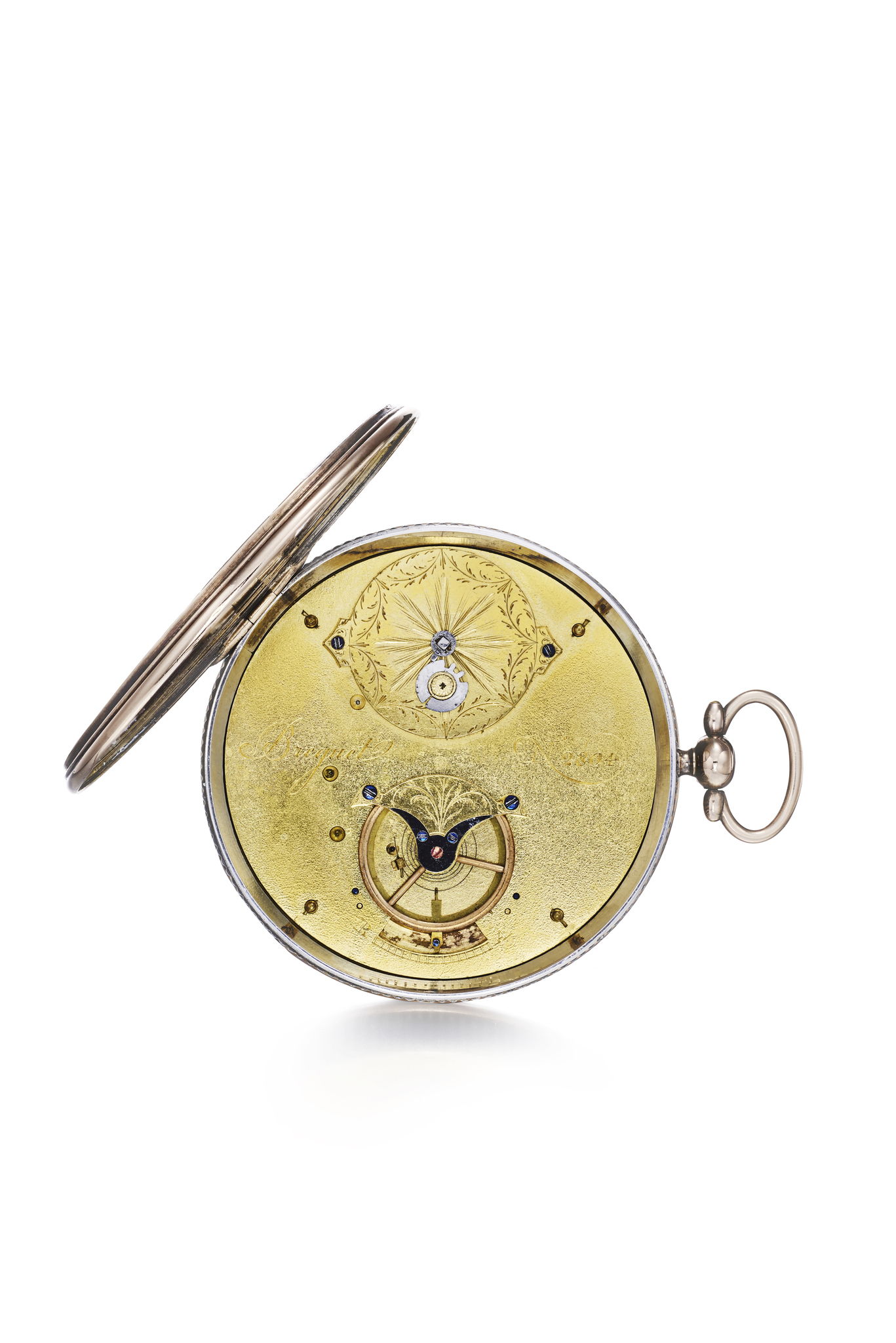 The "Ponte Mammolo" Silver, pink gold and micromosaic, open-face, key-winding, roundshaped, "Souscription"-type "Empire" pocket watch; fluted caseband, hinged case-back and bezel. "Souscription"-type white enamel dial with secrete signature ("Breguet / No 2804) and unique blued steel Breguet hand (counter-enamel inscribed "683" and "5"). Case-back with polychrome micromosaic showing an ancient fortified bridge with a tower and other structure over a river, the "Ponte Mammolo" (Mammolo Bridge) on the Aniene River, a tributary of the Tiber, after an engraving of Giuseppe Vasi (1710-1782) published in 1754.

“Ponte Mammolo” Giuseppe Vasi opened his 1754 book covering the monuments along the River Tiber with three etchings showing the bridges which crossed the Aniene or Teverone, a tributary coming from Subiaco and Tivoli and joining the Tiber north of Ponte Milvio. Via Tiburtina, the road leading to Tivoli, crosses the Aniene twice; Vasi chose to show Ponte Mammolo, the bridge nearer to Rome, although Ponte Lucano, the other bridge, offered a more evocative view because of a nearby ancient mausoleum. He showed the latter in a small etching in the opening page of the book. Vasi, Giuseppe Corleone, Sicily, August 27, 1710 ?? Rome, April 16, 1782 Italian engraver and architect, best known for his vedute. The first series of akin consists in the “Vedute di Roma sul Tevere” (Views of the Tiber), circa 1743, and later adapted to become part of the “Delle magnificenze antica e moderna di Roma”. In these years, Vasi also hosted in his workshop for a limited period of time the young Giovanni Battista Piranesi (Mogliano Veneto, 1720 ?? Rome, 1778), his major pupil, who shaped here his technique as an engraver. From 1747 to 1761, he published a series of ten volumes including circa 240 engravings of view of Rome. Micro-mosaic The term “micro-mosaic” refers to a mosaic whose tiny elements of spun glass, fragments of coloured enamel or hard stones, constituting its decoration, are very finely assembled so as to make the joints almost imperceptible. There are two types of pieces: • The classic micro-mosaics mounted by assembling tiny plates carved in glass rods, called tesserae or smalti filati, which are Roman or Venetian. • The marquetry of hard stones, called pietra dura, which are Florentine. An assembly composed of regular shapes is typical of Rome, while in Venice a wide variety of forms are used for the creation of micro-mosaics. The assembly is hot glued with a mixture of beeswax and resin. The Roman technique, says “frosting”, is that parts after assembly and gluing are polished and polished unlike Venetian pieces. The miniature tesserae are obtained after a complex process: glass melting, amalgamation of the paste and transformation of the amalgam into yarns and baguettes, which are then cut to obtain said tesserae. To fix them on the glued support, the mosaicist must use tweezers. Many of these tesserae are smaller than one millimetre (3 mm in the edge nets). Only slightly thicker than a hair, these smalti filati can be more than 800 cm2. The more their number is important, the more the object is of quality. The technique of the "frosting" of the micromosaic was perfected around 1775 by Cesare Aguazzi (?-?) and Giacomo Raffaelli (1753-1836). It’s a real work of goldsmith in which are illustrated, from the end of the 18th century, great masters, such as Antonio Aguatti (?-c.1846), Cavaliere Michelangelo Barberi (?-?), Gioacchino Barberi (1783-1857), nephew of the previous, etc. The micromosaic is not only used on jewellery objects (brooches, buttons, earrings, necklaces, etc.); it also decorates the lids and walls of bonbonnieres, snuffboxes and other boxes, but also vases or the table tops. Their favourite themes are animals, bouquets of flowers, popular sketches, landscapes of Tuscany and Italy in general, ancient ruins, great monuments of Rome and the Vatican, portraits of famous personalities, works of art great Italian and foreign painters. The use of this technique of extraordinary virtuosity on a large scale is at the origin of the renewal in Rome of the Studio Vaticano del Mosaico which is still active today (Piazza di Spagna). The micro-mosaic knows its golden age from the late-18th to the early-19th century. The first exhibition of this art is organized in the workshops of Giacomo Raffaelli in Rome in 1775. At this time of the Grand Tour, the European aristocracy visits the Italian cities and particularly Rome; it contributes through its purchases to the development of these workshops where these “souvenirs” (memories) of travel are made. In 1820, there are more than twenty workshops in Rome. Under the first Empire, the spread of the "mosaici filati" was great, first in Italy, then throughout Western Europe as in St. Petersburg (Raffaelli became advisor to the Tsar of Russia) or even in Istanbul (Dolmabahçe Palace, circa 1853-1856).