The Longitude at the Eve of the Third...

Breguet & Fils, No. 2897, Horloge Marine, lettre K, sold to Ducom on October 17, 1816, for 1500 Francs.Rare and fine mahogany marine chronometer, similar to those produced in the workshop of Louis Berthoud. 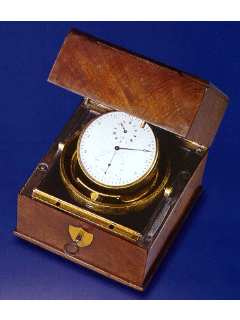 According to the workshop books, the movement of this chronometer was bought by Breguet from Saulnier, finished in his case, on December 29, 1814, for 1000 Francs. Recased, renewed and timed by Breguet who had made the mahogany box with its gimbal suspension. All together the total cost price was 1510 Francs.Saulnier being with Henri Motel and Henriot one of the pupils trained by Louis Berthoud for the account of the Government, it is not surprising that this chronometer is almost identical to those produced in the master's workshop. The only differences worth mentioning are the pillars of the movement, here in brass instead of steel, and the gimbal suspension in the mahogany box, which is of slightly different shape. Please compare with the chronometer signed Berthoud Frères, No. 215 (lot No. 31 inthe present catalogue).All the chronometers of this type which are not signed by Louis Berthoud, his sons or his pupils, turned out to have been made in his workshop, even when they were signed by retailers such as Charles Le Roy (J.-C. Sabrier: La Longitude en mer à l'heure de Louis Berthoud et de Henri Motel, Antiquorum Editions, Geneva, 1993, p. 317, fig.126) or by Amaury au Havre (sold by Antiquorum on October 19, 1997,lot 355)Ducom, who bought this chronometer was the agent of Breguet in Bordeaux.Charles Baudin des Ardennes, (1784-1854) was born in Sedan, on July 21st, 1784. In 1799, aged fifteen, he joined the French Navy and was assigned to "Le Foudroyant', a famous flagship of the time. As an ensign on board the frigate "La Piemontaise", he was to participate in a battle in 1808 against the English fleet in the Indian Ocean, during which he had his arm ripped off by a canon-ball. Although severely handicapped, he was able to pursue his career at sea. In 1812, he distinguished himselfuring another battle against an English brig in the Mediterranean. The year 1814 saw Charles Baudin des Ardennes attain the rank of Lieutenant Commander; he continued serving in this capacity until after the Hundred Days. Upon the second return of the Bourbon family, he decided to resign from the Navy, as he had vehemently opposed their rise to power. The man is said to have offered to transport Napoleon Bonaparte to the United States, although this has since been proved factually incorrect.Retired from active service, Charles Baudin des Ardennes founded in Le Havre a commercial firm which was soon to prosper, trading with a number of colonial possessions, especially those located on the African continent. However, after the 1830 Revolution, a series of bankruptcies affected the firm's credit-worthiness and Charles Baudin des Ardennes decided to withdraw from business - which he was able to do honorably - paying off all outstanding debts. Having decided to rejoin the Navy, he was odered in 1838 to transport to Haiti a French commissioner whose mission was to settle the matter of the indemnity which France had imposed to the local Government. Force was to be used by the squadron in case of refusal by the authorities in Port-au-Prince to cooperate, which they did not. Des Ardennes was received cordially by the President of the Haitian Republic.Charles Baudin des Ardennes had barely returned to France when he was promoted to the rank of Rear Admiral and dispatched to Mexico to put an end to the anti-French acts perpetrated against French merchants long established in that country - acts which had been condoned and even encouraged by the Mexican authorities. Obtaining no satisfaction, Charles Baudin des Ardennes attacked with four ships the fort of Saint Jean d'Ulloa, a stronghold which had the reputation of impregnability. A few hoursater, the fort was but a mere ruins and the French troops had managed to capture a number of Mexican soldiers. This military feat, which put an end to the quarrel between the two governments, covered the French Navy with glory. In 1848, Charles Baudin des Ardennes was decorated with the Grand Cordon de la Légion-d'Honneur. In later life he became an eminent member of the Council of the Admiralty.