Painted aluminium insulated box, keyless-winding, rectangularshaped, airplane cockpit chronometer, with two horological complications and an independent watch: - 1/10 second chronograph (activated by the push-piece at 7 o'clock) - Split-seconds (activated by the push-bolt at 11 o'clock) Movement based on the French invention patent delivered on October 24, 1936, and the English invention patent No. 499 422, delivered on October 21, 1937, to Georges Henri Brown, Paris, for a "Sidereal Chronometer". 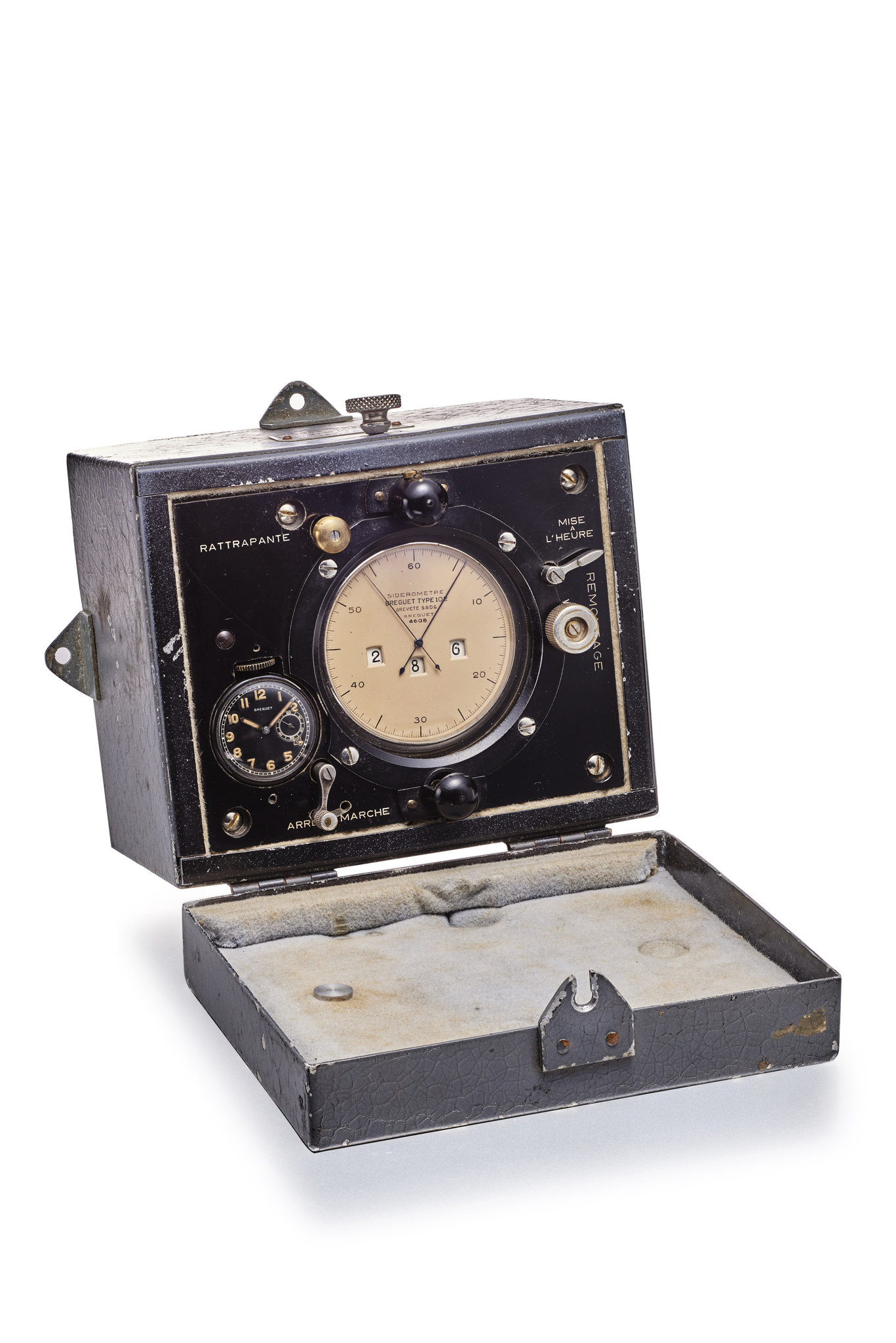 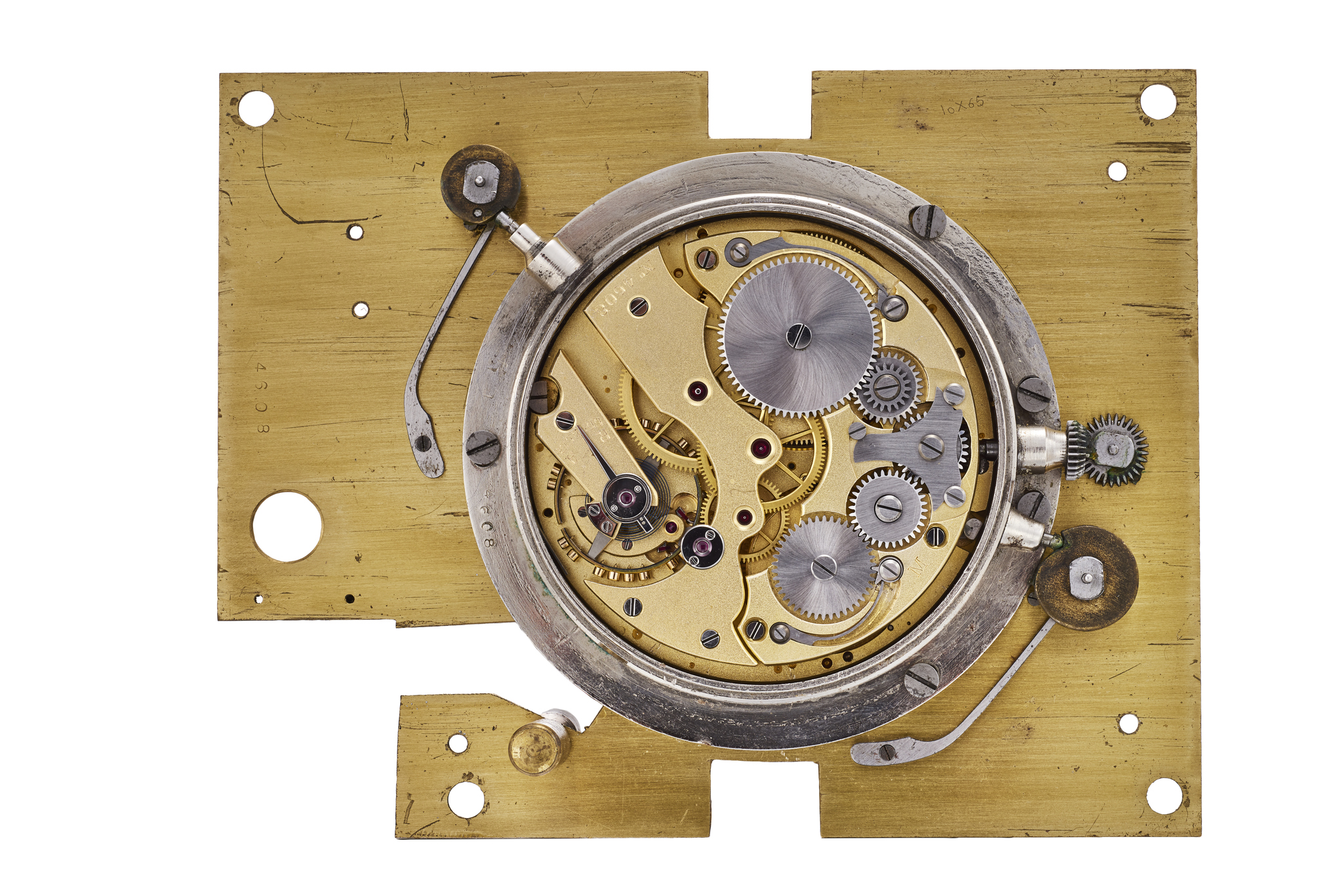 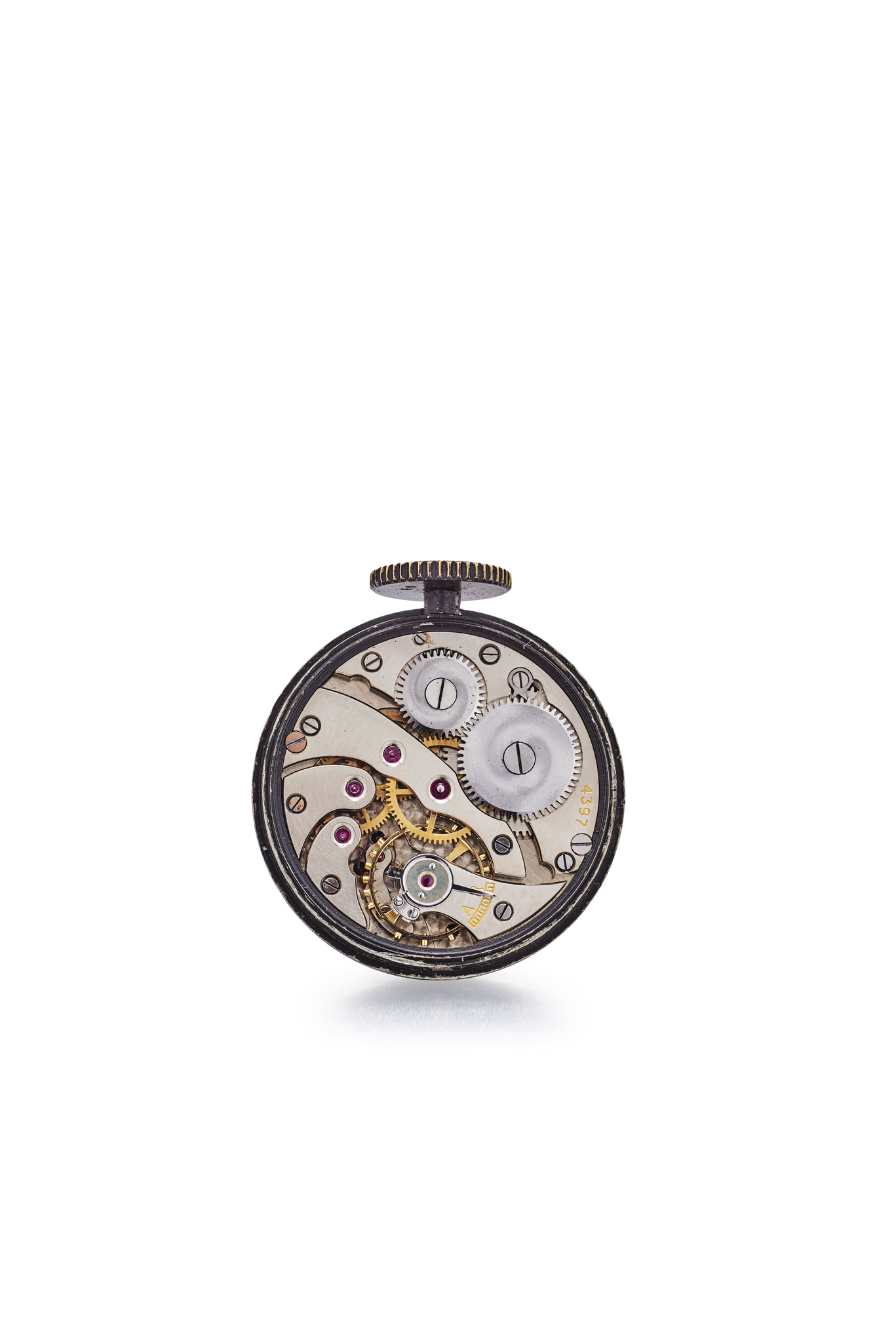 Calibre  24''', base on Victorin Piguet ebauche, Le Sentier (Vallée de Joux), gilded brass, with two going barrels (with differential winding, one for the going train, the other for the motion work that the going train can advance the numbered discs with minimal resistance), straight-line lever escapement, annibalbrass Guillaume balance with gold poising screws and blued steel hairspring with terminal curve

Caliber 24''', base on Victorin Piguet ebauche, Le Sentier (Vallée de Joux), gilded brass, with two going barrels (with differential winding, one for the going train, the other for the motion work that the going train can advance the numbered discs with minimal resistance), straight-line lever escapement, annibalbrass Guillaume balance with gold poising screws and blued steel hairspring with terminal curve

Accessories copies of the invention patent and related articles

This sidereal chronometer gives in minutes of arc, indications up to 360 minutes, which are directly readable, preferably through windows. It comprises 3 discs showing units, hundreds and tens, and having associated with it a coaxial sector with tail for the numerals. The units disc is driven by jumper mechanism, from the chronometer and each revolution, a tooth engages a projection and advances the disc one division. The insulated box is lined with felt insulation; three fixing brackets are riveted to the outside; there is no outer case, the movement being fixed to the underside of the dial-plate, the latter engraved with operating indication. The dial with outer seconds ring and three apertures for the digital degree indications. It seems that only 20 pieces of the “Sidéromètre, Type 101” were produced before World War II (circa 1935-1939), sold to the French Aéronautique or the civil aviation. 42 “Sidéromètre, Type 102” were made in 1946, but very few survived. “Sidéromètre” The Sidéromètre was designed in the late 1930’s by Georges Henri Brown, the owner of the house Breguet, Paris ?? but also a graduate watchmaker of the horological school of Cluses (Haute-Savoie, France) ??, and Commandant Jean-Léon-André Bastien (1894- 1977), professeur principal d’Hydrographie de la Marine, détaché au Service technique de l’Aéronautique, to provide a means of rapid position “fixing” for aerial navigation. Special tables were required, called “Aeronautical Ephemerids” and these were produced to be used with the instrument. This unusual timing instrument used to measure the rotation of the Earth in degrees has been patented internationally by Brown in 1936-1937 and published by Bastien in June 1938 in the Annales Françaises de Chronométrie, under the tittle “Le Sidéromètre Bréguet” (vol. 8, pp. 179-180), fortunately explained in a very simple and understandable way A “Sidéromètre, Type 101” (No. 4 099) was described and illustrated by Anthony Randall in The Time Museum Catalogue of Chronometers (Rockford, Illinois, 1992, pp. 110-111, fig. 66 a-d). According to Randall, a “Sidéromètre” does not indicate sidereal time as such, although it is adjusted to run at sidereal, rather than mean time, and then converts this into degrees, minutes and seconds of rotation of the earth. The centre-seconds hand, therefore, rotates not in sixty seconds of sidereal time but in the time taken by the earth to rotate through 1°, in relation to the stars. As the earth rotates through 1° in four minutes of time, the seconds hand rotates once every four minutes. The angular rotation of the earth is recorded by the numbered discs appearing in the dial apertures: degrees are shown on the right-hand side, tens of degrees in the centre, and hundreds of degrees on the left. There is an electrical input on the side of the box to connect to the power supply of the aeroplane-presumably about 24 volts. This provides the electrical energy for the bulbs and for a small thermostatically controlled heating element inside the box. Since the temperature inside an aeroplane of the period could drop to a very low value at high altitude, precautions were necessary to prevent rapid cooling of the inside of the box, with consequent risk of condensation in the mechanism and even the possibility of freezing of the oil. Although accurately compensated, the watch would otherwise also have been subject to a transient response due to rapid and extreme temperature change, and this had to be prevented. A “Sidéromètre, Type 102” (No. 4 379) is today kept in the National Maritime Museum, Greenwich, London. A full study of it was gave by Jonathan Betts, in its book, Marine Chronometers at Greenwich, A Catalogue of Marine Chronometers at the National Maritime Museum, Greenwich (Oxford University Press, 2018, pp. 611-613).