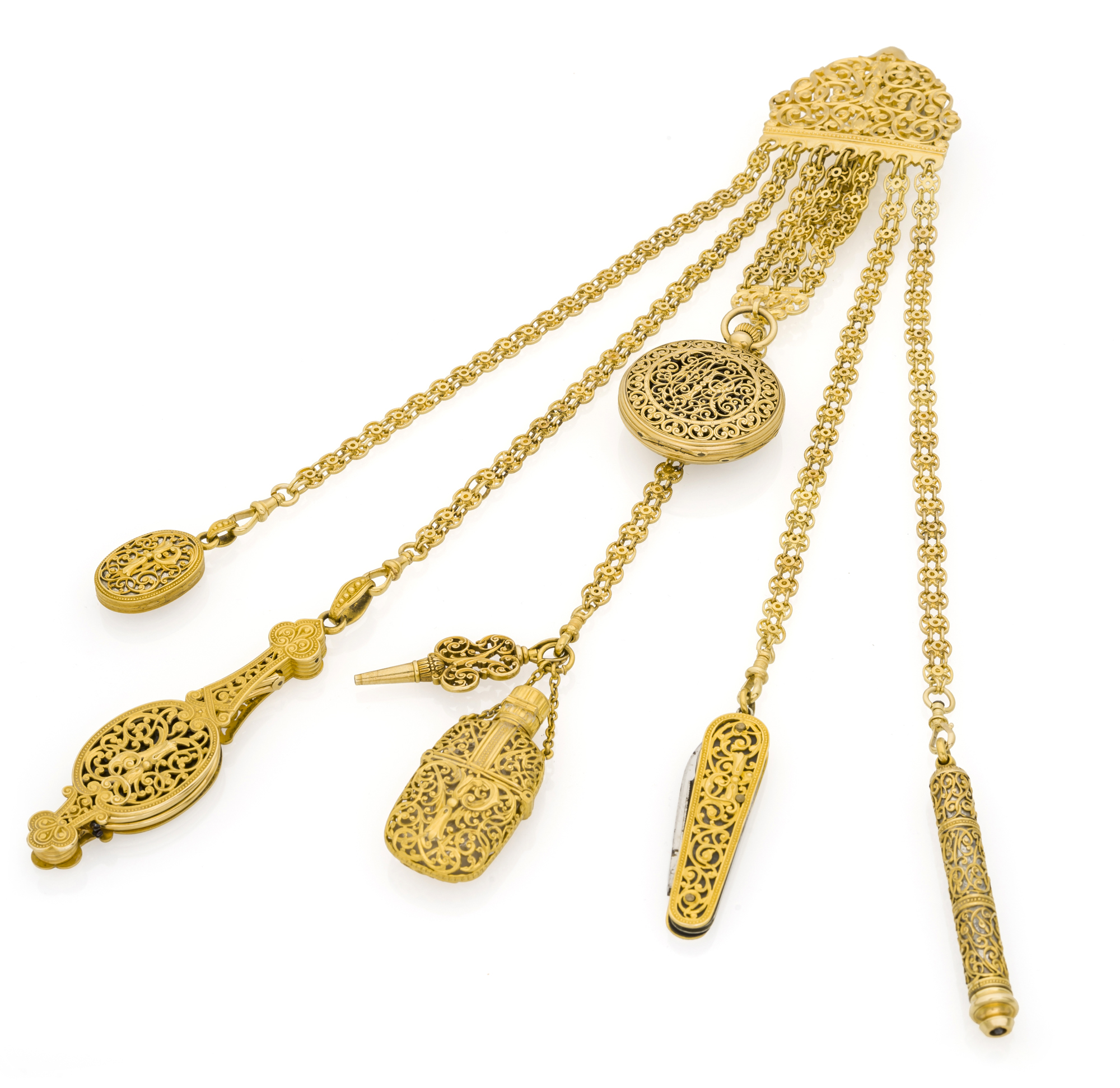 DIAM. 36 mm. Signed on the cuvette (back-dome); engraved inside the case-back of the dedication "Gemaine / 26 Avril / 1883". Accompanied by a chatelaine, decorated en-suite, with five breloques: a oval box (a locket that can contain a photographic or painting portrait or a plaited hair), a face-à-main (a pair of folding spectacles), a scent flask, a folding knife (with the blade signed Cardeilhac, Paris) with a folding nail file, and a pencil; coming also with an additional key Chain: ~ L. 290 mm. Provenance Referenced by the owner of the Collection as coming from a member of a Royal Family of the Balkans (maybe Romania). Charles Oudin, Paris - Oudin-Charpentier, Paris On the official Website of the brand you can find two articles published in 2007 in the Vox - The Antiquorum Magazine, signed by the late Jean-Claude Sabrier and numerous photographs of timepieces made by the Oudin (http://www.charlesoudin.fr/history.html). Bibliography Exposition universelle de Londres 1862, Section française, Classe 15, No 1590, Catalogue des objets principaux, de l'exposition de Oudin-Charpentier, Horloger..., Paris, Typ. J. Claye, 1862 (12 pp., 5 photographic plates). Exposition universelle de Paris 1867, Catalogue des principales pièces d'horlogerie exécutées par Oudin-Charpentier, Paris, 1867 (14 pp., photographic plates). Champier, Victor, & Sandoz, G.-Roger, Le Palais-Royal d'après des documents inédits (1629-1900), Paris, Société de propagation des livres d'art, 1900, t. 2, pp. 190, 194. Sabrier, Jean-Claude, "Oudin. A horological dynasty closely linked to Breguet", in Vox - The Antiquorum Magazine, Spring 2007, pp. 116-125. Sabrier, Jean-Claude, "Oudin. Part II", in Vox - The Antiquorum Magazine, Summer 2007, pp. 120-127. Fouquet, Alphonse (1828-1911) The Parisian jewellery house of Fouquet was founded in the 1870's by Alphonse Fouquet (1828-1911). Revival designs incorporating fantastical and mythological creatures became Fouquet's signature during the 1880's (see "The Sphinge" chatelaine, Paris, Musée des arts décoratifs). At the turn of the 19th and 20th centuries, his son, Georges Fouquet (1862-1957), works closely with the celebrated artist Alphonse (Alfons) Mucha (1860-1939), together they created unique and flamboyant jewels in the Art nouveau style for the celebrities of the day, such as the actress Sarah Bernhardt (1844-1923). Boucheron, Paris (since 1858) The House of Boucheron is a French family dynasty founded in 1858 by Frédéric Boucheron (1830-1902), with the opening of his first store in the Galerie de Valois, at Palais Royal, during the heyday of the Second French Empire. He created his Workshop in 1866 and a year later won the Gold Medal during the Universal Exhibition (1867). At this period, he works with the watchmakers Oudin-Charpentier but also with Vacheron Constantin of Geneva. In 1893, Frédéric Boucheron became the first jeweller to move to Place Vendôme. Legend has it that he chose Place Vendôme No. 26, where Boucheron remains to this day, because it was the sunniest corner of the square. He believed that the diamonds in the windows would sparkle all the more brilliantly.In 1893, Boucheron opened a store in Moscow, later transferred to St. Petersburg in 1911. In 1903, the brand also opened a store in London and an office in New York. More store openings followed in Japan in 1973, Shanghai, Dubai in 2005, and finally Hong Kong and Kuala Lumpur in 2006. Boucheron was a family business: after the death of its founder Frédéric Boucheron in 1902, his descendants took over the business. In 1994, the family business shifted to a more global approach with its selling out to Schweizerhall. The House of Boucheron was then acquired by former Gucci Group in 2000, which was bought by PPR-Kering Group in 2004. Cardeilhac, Paris (from 1804 to 1951) Cutlery and goldsmith, Paris, rue de Rivoli No. 91. Established in 1804 by Antoine-Vital Cardeilhac and specialized in cutlery and flatware, the house was directed, from 1851 to 1904, by his son Armand-Edouard Cardeilhac, then, from 1885, by his grandson Ernest Cardeilhac (1851-1904). The latter buys the funds from the Lebon House. In 1904, the two sons of Ernest Cardeilhac succeeded him, James and Peter (died in 1944). The company is amalgamated at the Christofle House in 1951. To be sold without reserve