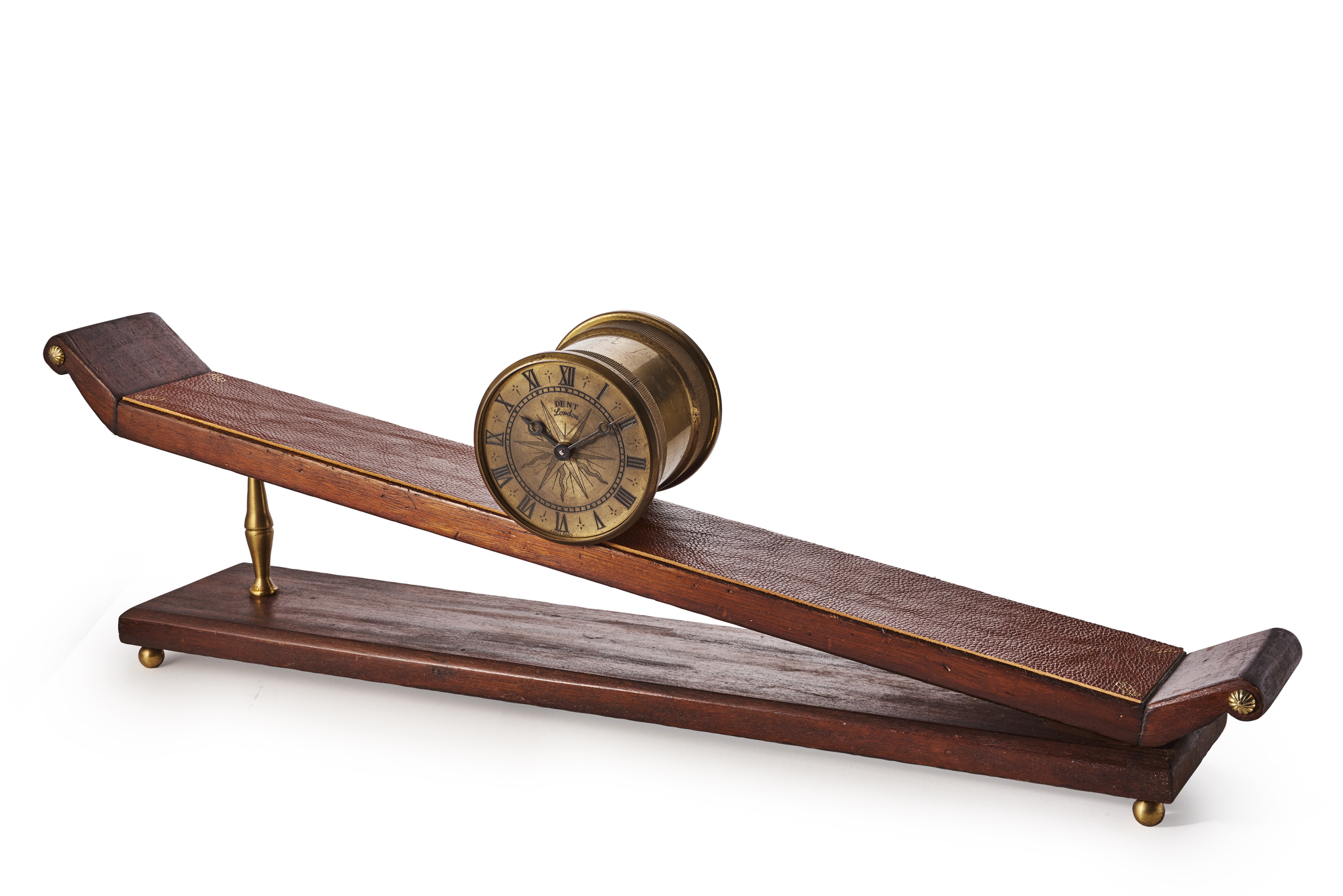 Model made by Andrew Fell

Calibre  driven by the clock's own weight, descending by itself on the inclined plane (the dial remaining in a horizontal position)

Caliber driven by the clock's own weight, descending by itself on the inclined plane (the dial remaining in a horizontal position)

Inclined plane clock (Lot 123) This clock is based on a system already used at the beginning of the 17th century. The motive force of the clock is provided by a weight placed inside the movement acting against the resistance of the development of the going train, thus replacing the barrel. On the axis of the centre wheel is fixed a lever with a weight which serves as a speed regulator. During the descent, the cylinder drives the movement and the dial, while the hour hand (or the hour and minute hands) weighted remains fixed and indicates the countdown time of the movement of said cylinder. This clock does not need to be wind; it is placed manually, every week, at the top of the inclined plane in order to cover the slope in seven days. Like many so-called fancy clocks, these kinds of pieces regularly return to fashion. We know some rare examples of clocks that descend on an inclined plane of the 17th century and some more or less detailed descriptions. In the 18th century, this clock is first published by Gaspard II Grollier de Servière (1676-1745), in his “Recueil d’ouvrages curieux de mathématiques et de mécanique, ou Description du Cabinet de Monsieur Grollier de Servière” (Lyon , 1719; 2nd edition, Lyon, 1733), relating the inventions of his grandfather, Nicolas Grollier de Servière (1596-1689), French engineer and author of “fantastic machines” which are exhibited in Lyon in his famous Cabinet of Curiosity (“Septième horloge”, pp. 12-13 and pl. XVII, fig. 42). Antoine Thiout (1692-1767), a French watchmaker, in his famous “Traité d’horlogerie méchanique et pratique” (Paris, 1741) gives a more complete description (p. 303 and pl. XXX). Charles-Edouard Guillaume (1861-1938), future Nobel Prize in Physics (1920), gives a description in the newspaper “La Nature” (Paris, 1892, No. 1, p. 124, “Singulière horloge”). At the turn of the 19th and 20th centuries, Mathieu Planchon (1842-1921), a prolific French watchmaker and horological historian, made reconstructions in Paris. Maurice Couët (1885-1963), a great unknown French watchmaker, made one for Louis Cartier (1875-1942); clock still visible at the headquarters of the “Grande Maison”, 13, rue de la Paix, in Paris. In the 1970’s, Andrew Fell made some of them for the Dent house in London. The Arthur Imhof S.A. house in La Chaux-de-Fonds has made a specialty of this type of clock since the 1980’s.