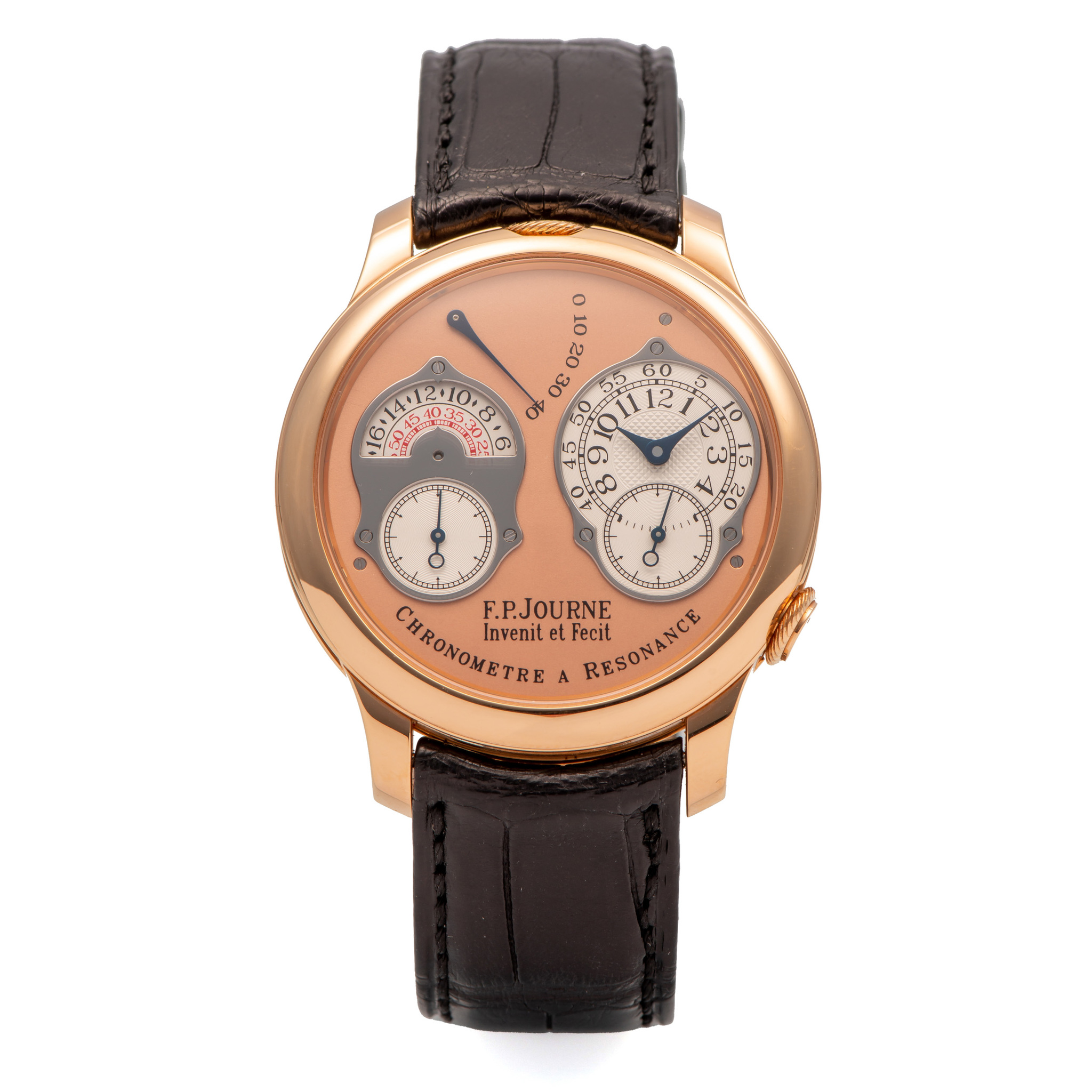 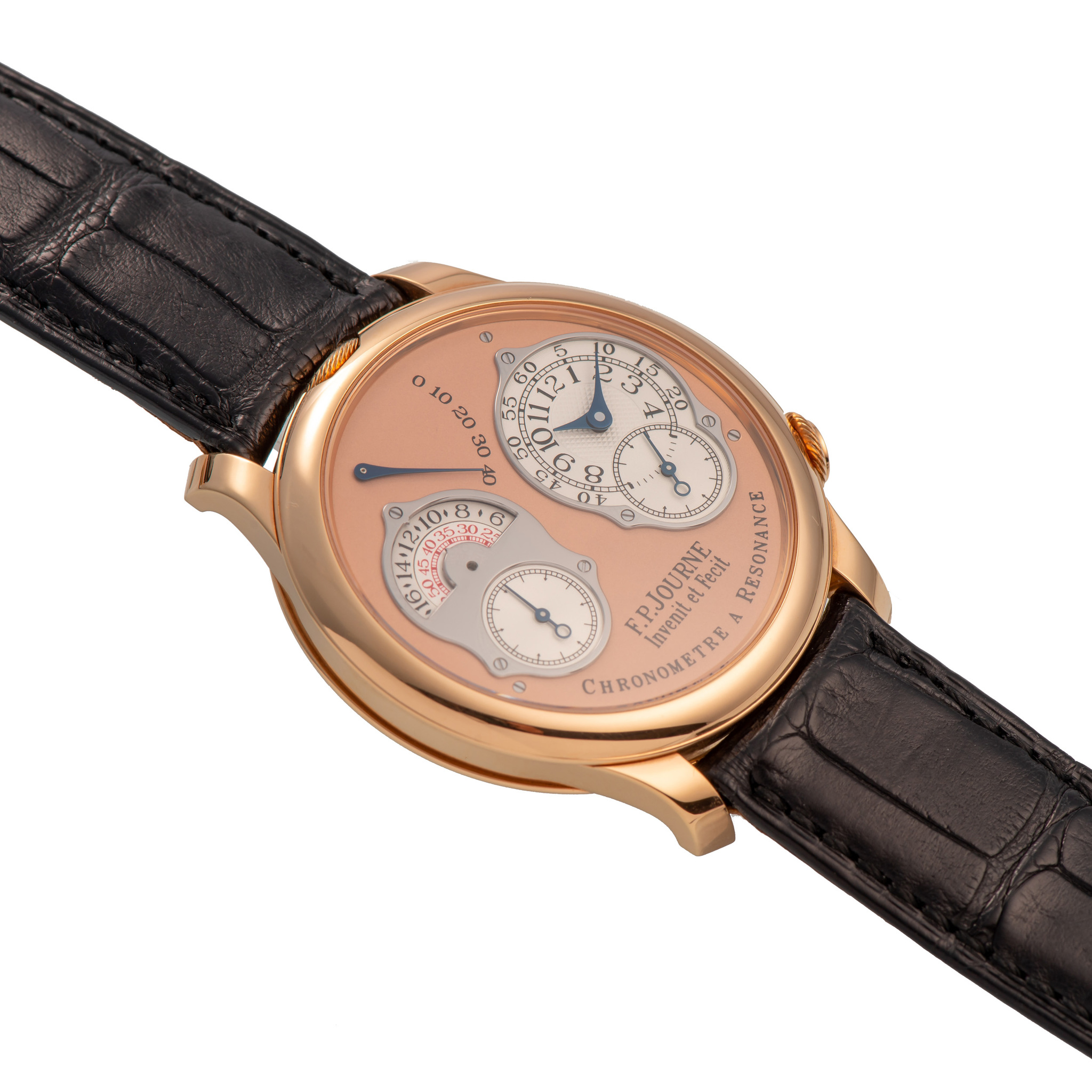 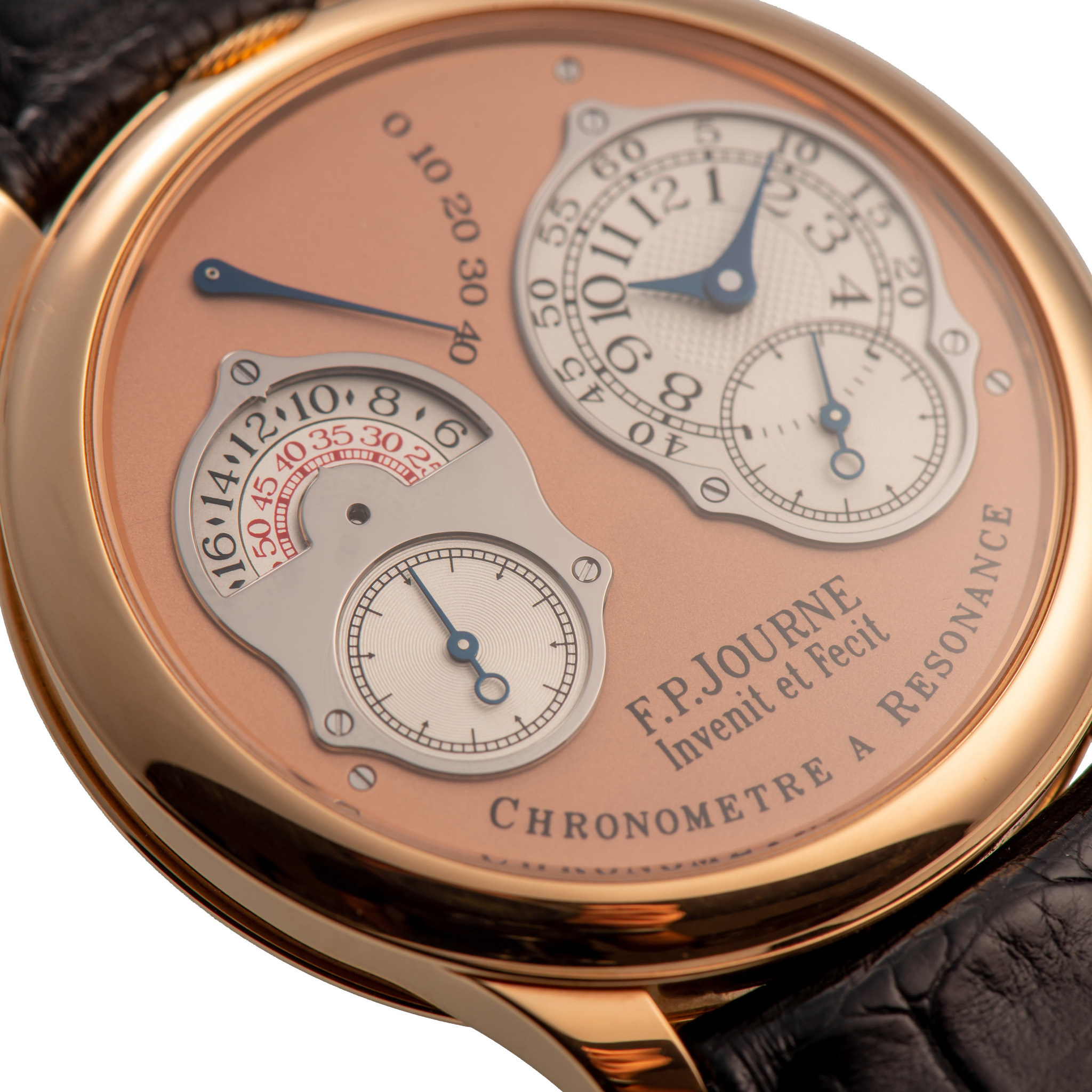 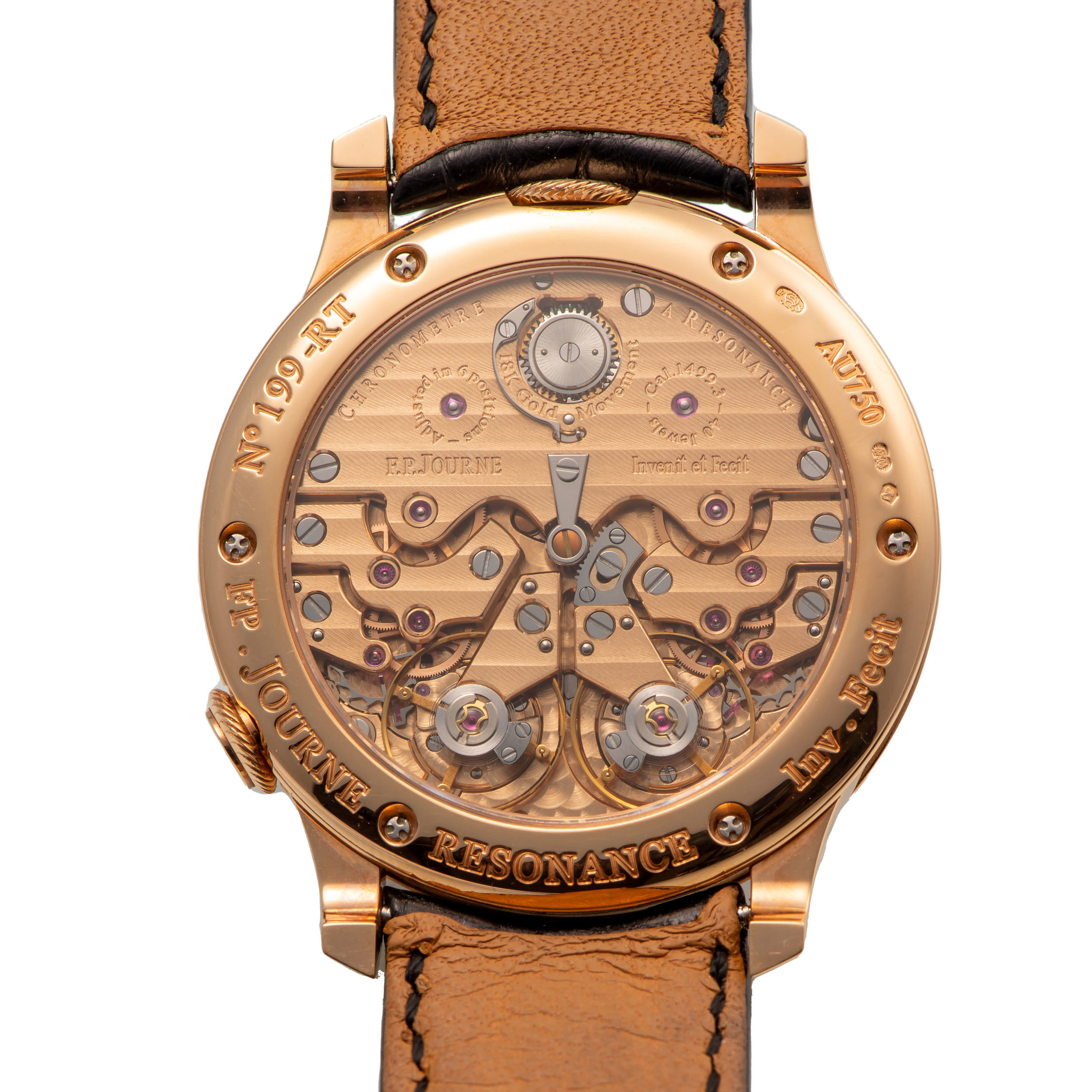 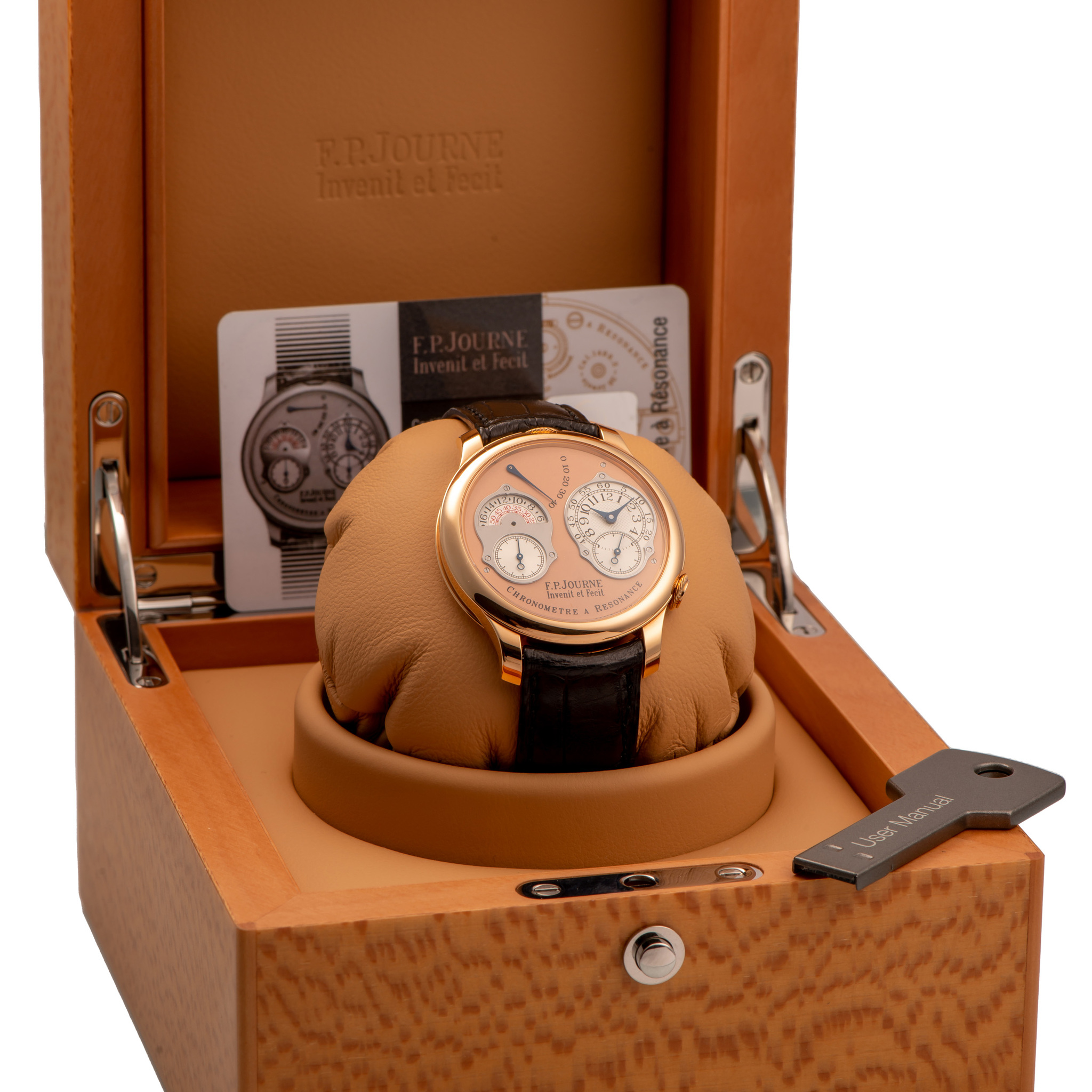 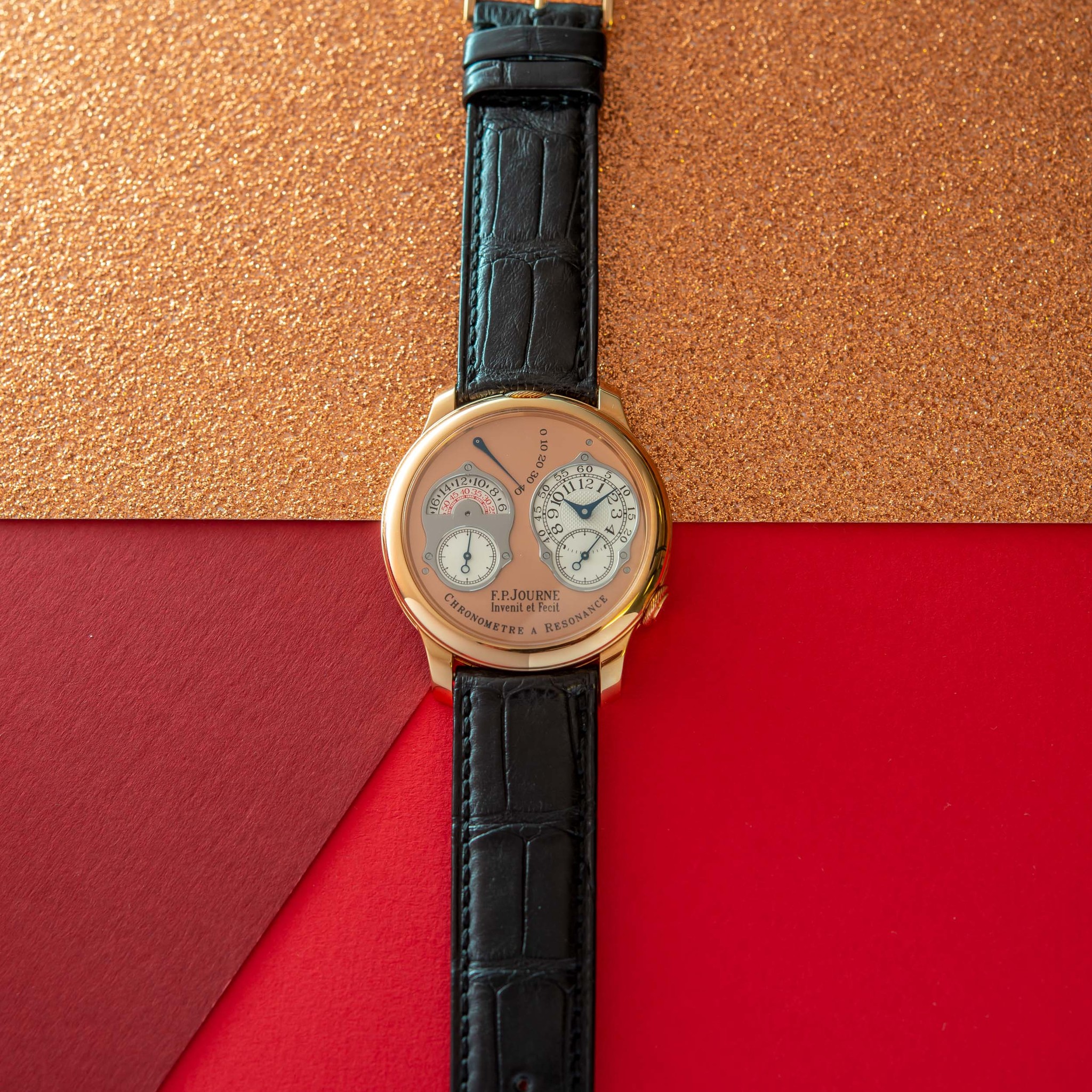 "Chronomètre à Résonance"
An exceptional and unique creation in chronometer engineering, the Resonance System Chronometer exhibits the so-called resonance, a phenomenon of physics duly applied to the science of horology. A world first, this wristwatch uses two entirely independent movements which inter-operate in harmony – in “sympathy” – with each other for a wearing precision that exceeds the established limits for mechanical wristwatches.
The physical phenomenon of resonance forms an integral part of our daily-lives, yet we scarcely pay any attention to it. When searching for a specific program on our radio, the radio crackles because the waves selected have not encountered other waves, those of the radio transmitter, until they become harmonized. In the past, Napoleon once forbade his troops to march over a bridge for fear of it collapsing from the effects of resonance! Although this phenomenon is proven and acknowledged, it is still difficult to explain.
Until the recent years, the phenomenon of resonance was not well understood, but had already been pointed out as early as the 17th century by Christiaan Huygens, in particular, among several other scientists. For instance, the highly precision Constant Pressure regulators, still in use less than 40 years ago at the Observatory of Paris for the Bureau International de l’heure and the radio broadcast time signal sent from the Eiffel Tower, were fitted in the Catacombes, at a depth of 26 metres to eliminate fluctuations in temperature and atmospheric pressure. They were also set in separated rooms, in order to avoid any resonance interference. However, as early as the end of the 18th century, few clockmakers among the most eminent found a way to take advantage of the success of such a phenomenon, by synchronizing the pendulums of regulators fitted with two independent movements. Even more so, when applied to a watch, it ensures exceptional operating reliability and precision. When you make a sudden movement, the two movements clash in opposite directions and gradually come to operate in harmony as a result of the force of resonance. As they are inter-attracted, they oscillate together in union, an invisible wave linking the two balances. This timepiece is the only precision chronometer that is not affected by the movements of the wearer. The balances oscillate in natural opposition, and therefore absorb the shocks and compensate the disturbances in order to ensure identical regularity, whether it is worn or not.
The first prototype of the “Souscription” “Résonance” Number “000” was completed for and sold at the Antiquorum thematic auction, The Longitude at the Eve of the Third Millennium, in October 23, 1999 (lot 75), and we are greatly honoured to auction another historical example, offered for the first time at auction.

François-Paul Journe
François-Paul was born in Marseille (South of France) in March 1957. He entered watchmaking school at the age of 14 and after two years, moved to Paris to continue his studies, In 1976, he graduated from the Paris Horological School, and two years later he began working in an antique watch restoration workshop in Paris. Journe’s first own workshop was in the rue de Verneuil in Paris. Among his exceptional early creations are: a “tourbillon” pocket watch in 1978; a planetary pocket watch in 1985; a self-winding chronometer pocket watch in 1986; a “sympathique” clock for the Asprey in London.
Only two years after his professional independence, in 1987, he received the honours of the FondationBleustein-Blanchet, created in 1960 to foster and reward outstanding achievement in the professional world. And so, he received the Laureate Prize of the Fondation de la Vocation, a very well recognised and esteemed distinction.
In 1989, he was honoured by the Horological Spanish Academy who delivered him the golden prize of “Balancier d’or” for his global work.
His boundless creativity pushed him to create the same year, with a small group of colleagues, the Manufacture company, Technique Horlogères Appliquées S.A. (T.H.A.) in Sainte-Croix (Canton de Vaud, Switzerland), specialised in developments and manufacturing of complex and innovative products, most of which were conceived by François Paul Journe for several famous brands.
In 1994, he received the Gaia “Watchmaker of the Year” award from the Musée International d’Horlogerie, Fondation l’Homme et le Temps.
Established since then in Geneva, he created in 1998, Montres Journe S.A., located at the rue des Maraîchers 5 in Geneva. He developed and manufactured complex and innovative products for many major companies such as Piaget with “The Grande Sonnerie””, Cartier with the “Mysterious” clocks and watches for Asprey, Breguet, Corum among others.
In 2003, François-Paul Journe established the Japanese branch of “Montres Journe”. He received some awards:
· The special “Grand Prix de l’Horlogerie de Genève” prize of the jury in 2002;
· The “Grand Prix d’Horlogerie de Genève” for men’s watches in 2003;
· The “Aiguille d’Or” of the “Grand Prix d’Horlogerie de Genève” in 2004;
· The “Chronomètre Souverain” won the watch of the year prize in Japan in 2005.
In 2006, he was made “Chevalier des Arts et des Lettres” by the French Minister of Culture.
Journe’s “Sonnerie Souveraine” was awarded the “Aiguille d’Or” award at the “Grand Prix d’Horlogerie de Genève”; that same watch was named watch of the year in Japan in 2007.

All this was the result of his first years of work as an independent watchmaker! The rest you can find on his website and in the publication dedicated to him.
Thanks to his excellence, this infinitely good character remains one of the greatest masters in the history of watchmaking, worthy of being named after a Julien Leroy, an Abraham-Louis Breguet, an Antide Janvier or a George Daniels.