Gilded metal, vertical octagonal-shaped cage incorporating a key-winding singing-bird.
Cabinet of octagonal shape, with eight Corinthian columns, supporting an arched dome; the whole is decorated with floral motifs, wreaths, palmettes and acanthus leaves, pierced, chased and gilded; on the top, some silvered flowers embellish the entire piece; an urn with a suspension ring imitating a rope finishes the object in its upper part; on the front, two doors open with the help of a handle set with a turquoise; the base is decorated in chiselled frames with four oval miniature medallions, placed horizontally, with polychrome paintings on enamel on copper representing lake and sea scenes; at the base, the object is carried by four feet in the form of lion's paws.
Inside the cage, a small multicoloured feathered bird, a nightingale, is perched on a golden branch and moves when its mechanism is activated; it swivels on itself, turns its head, flaps its wings and tail, all the while singing its melody (the lever for activating the bird’s mechanism (song / silence) is located, in front, on the left-hand side of the cage; at the bottom of the cage, a finely-worked grid imitates its nest and allows for the broadcasting of sound.
Singing-bird mechanism, octagonal-shaped (~ 90.1 x 90.1 mm.), brass, turned pillars, fusee and chain, circular bellow and eight lifting cams; the revolving bird with moving wings, beak and tail, controlled by two other cams mounted beneath the barrel wheel; winding up of the mechanism by key, under the cage. 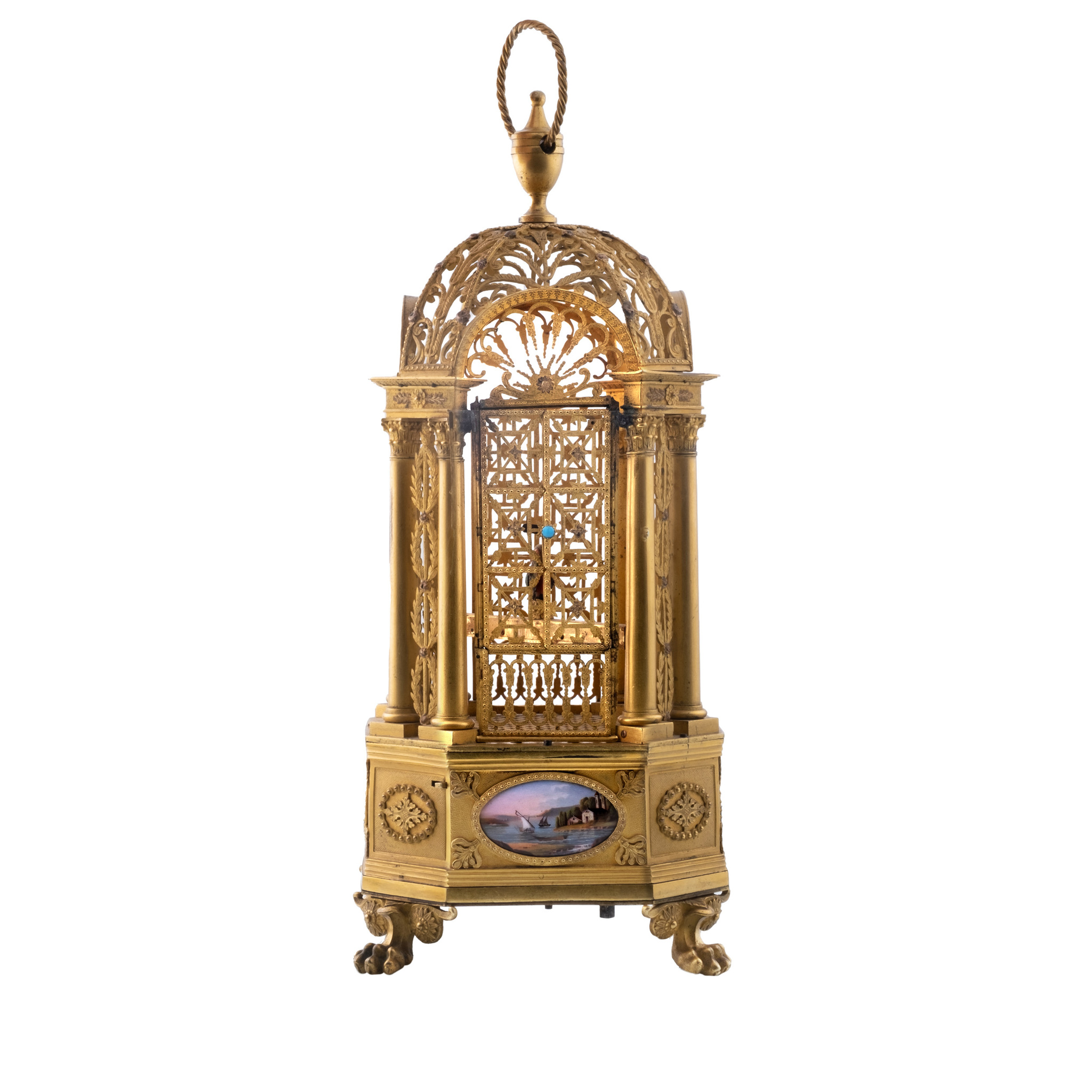 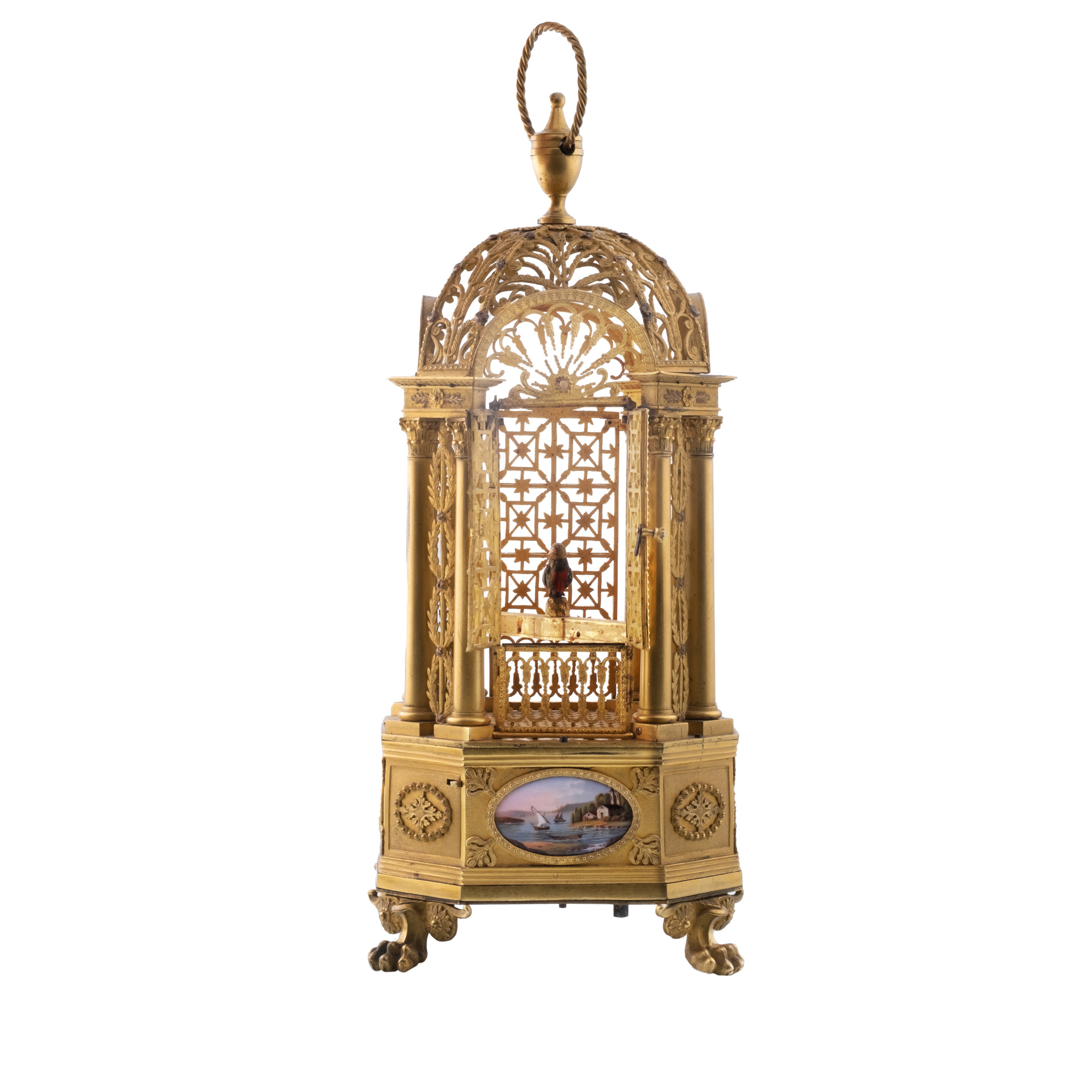 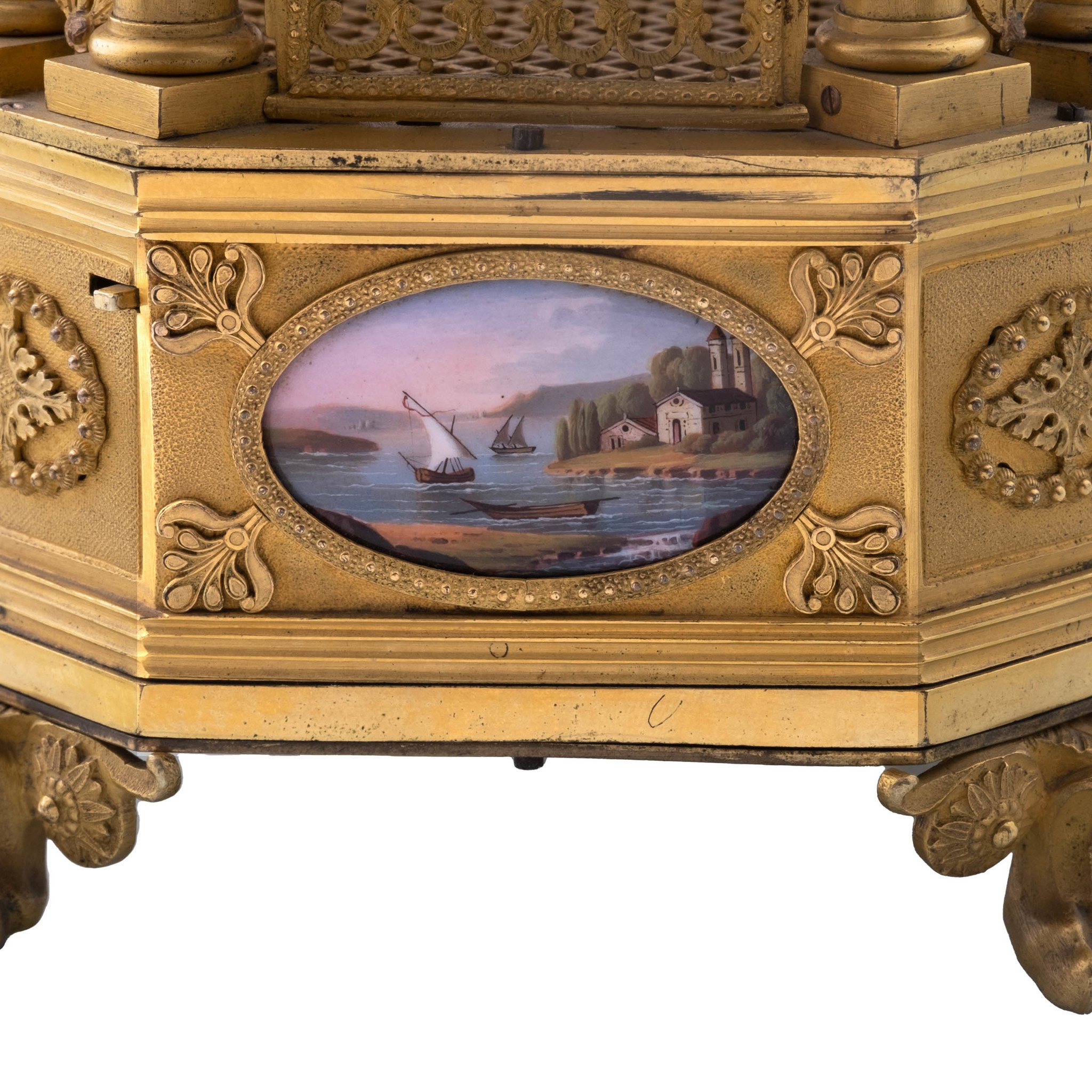 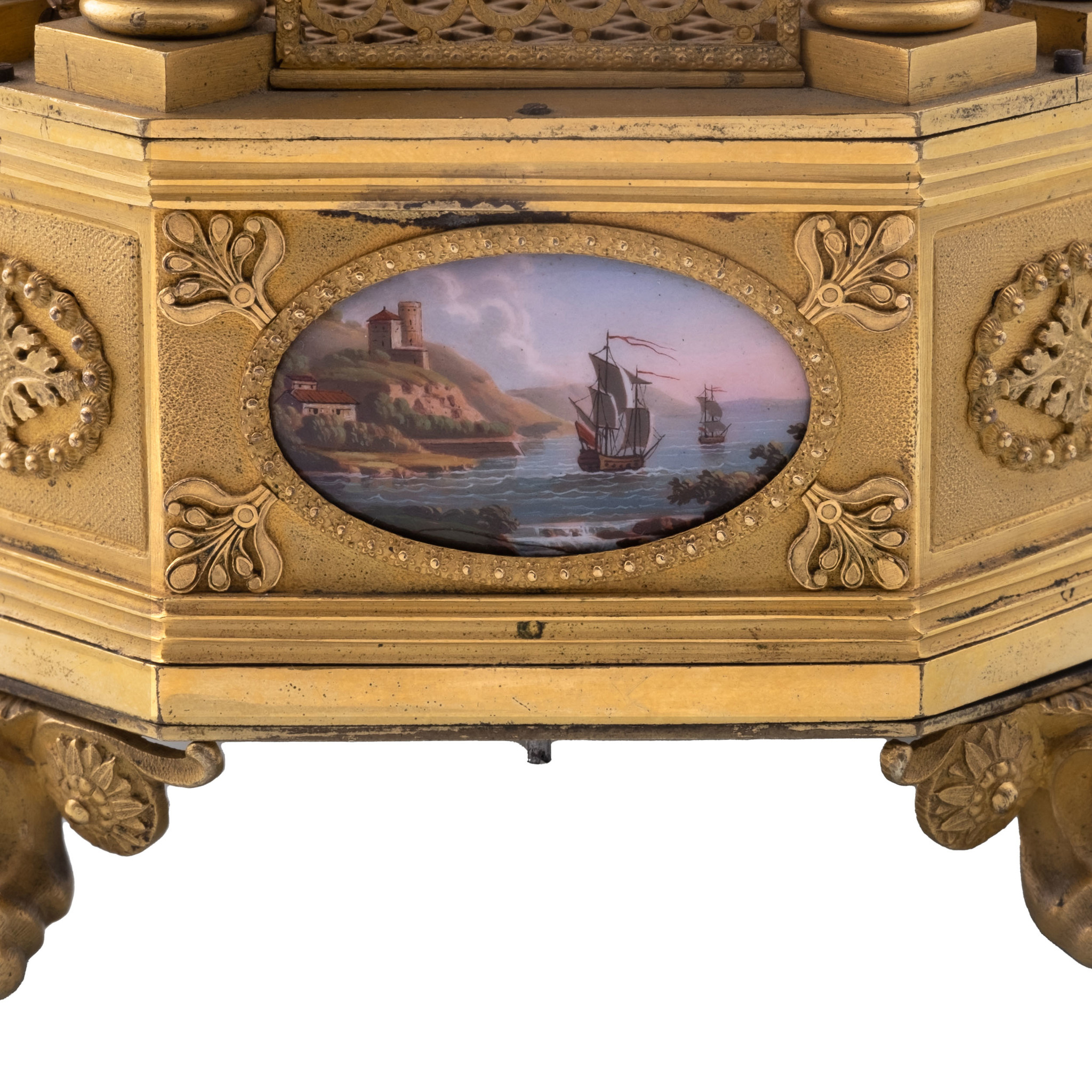 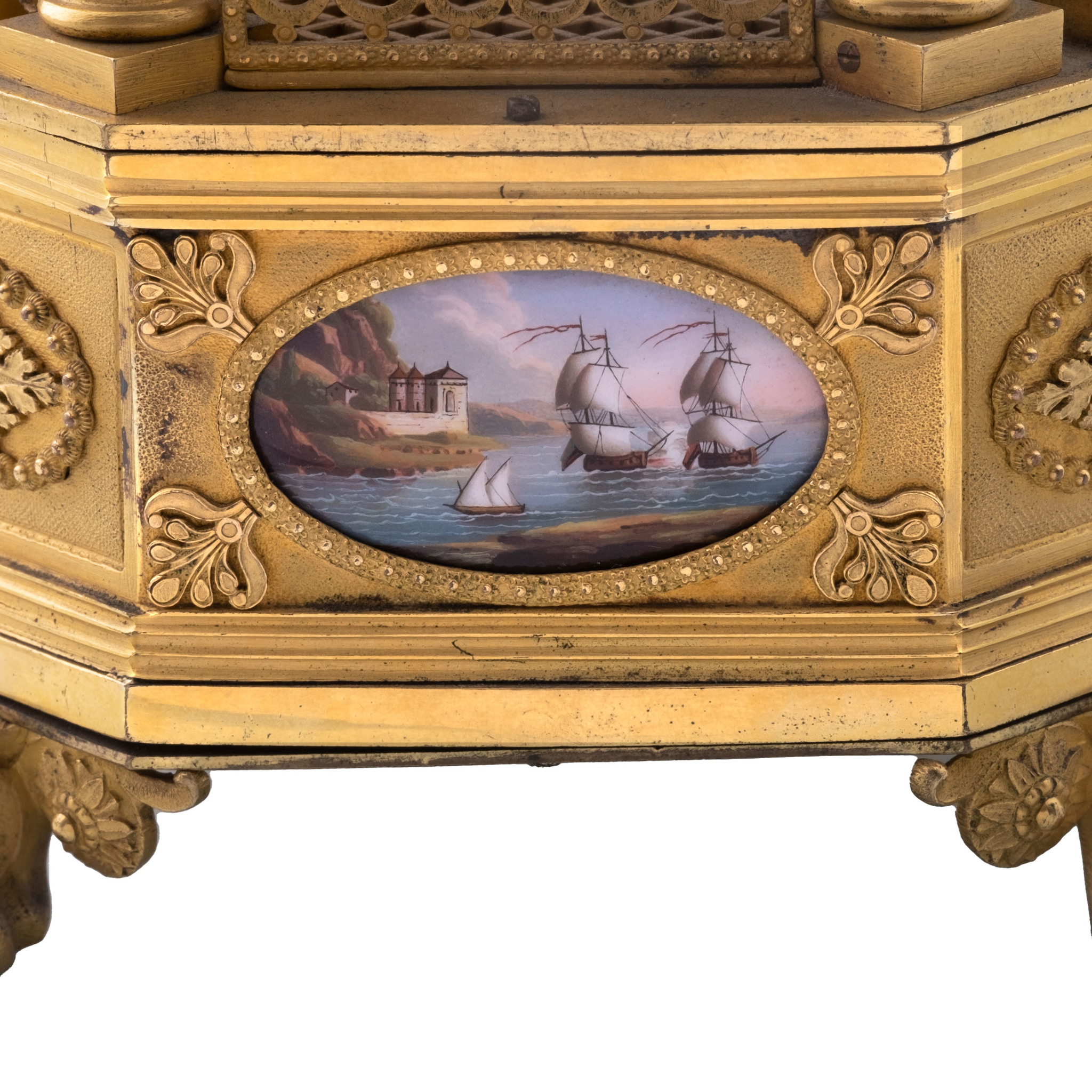 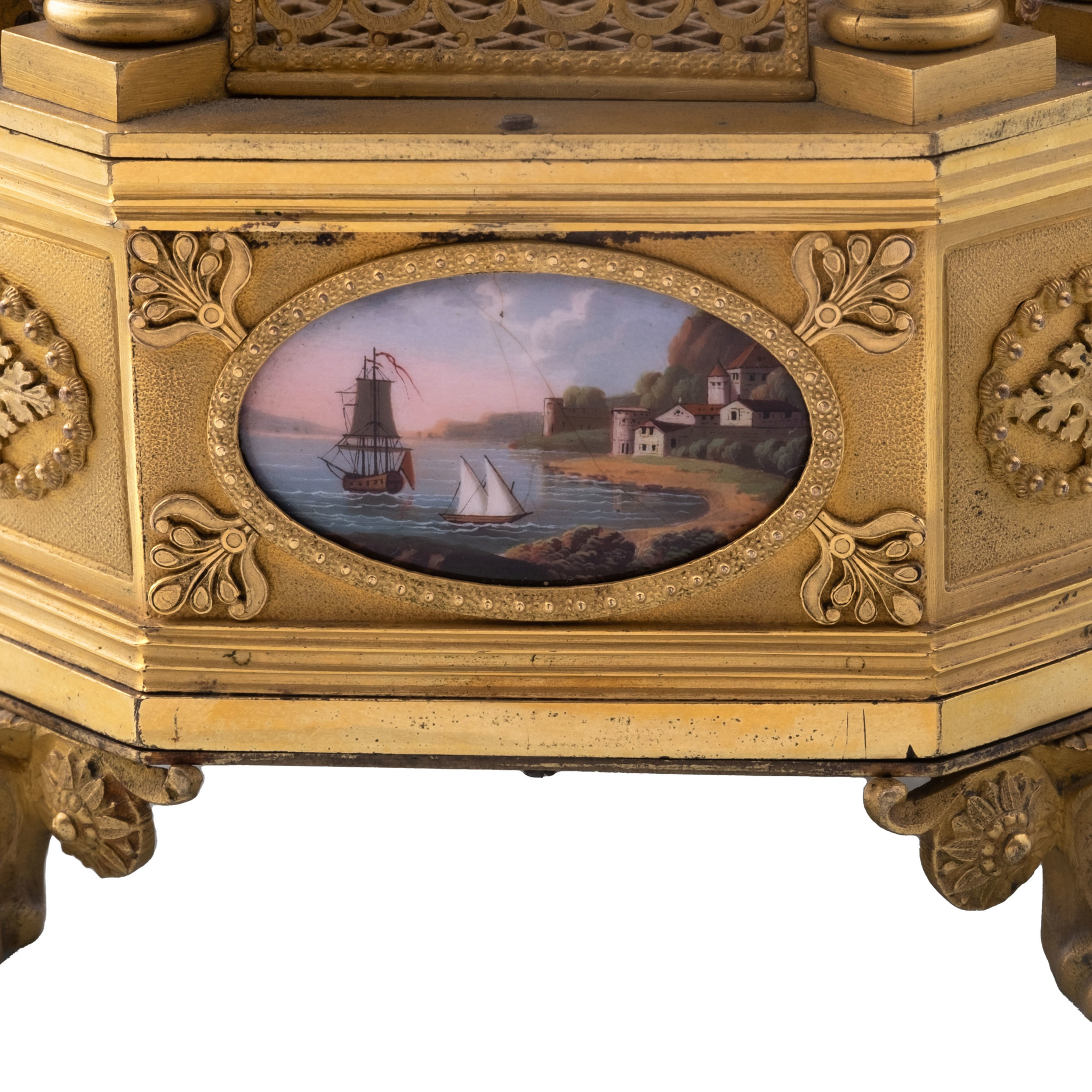 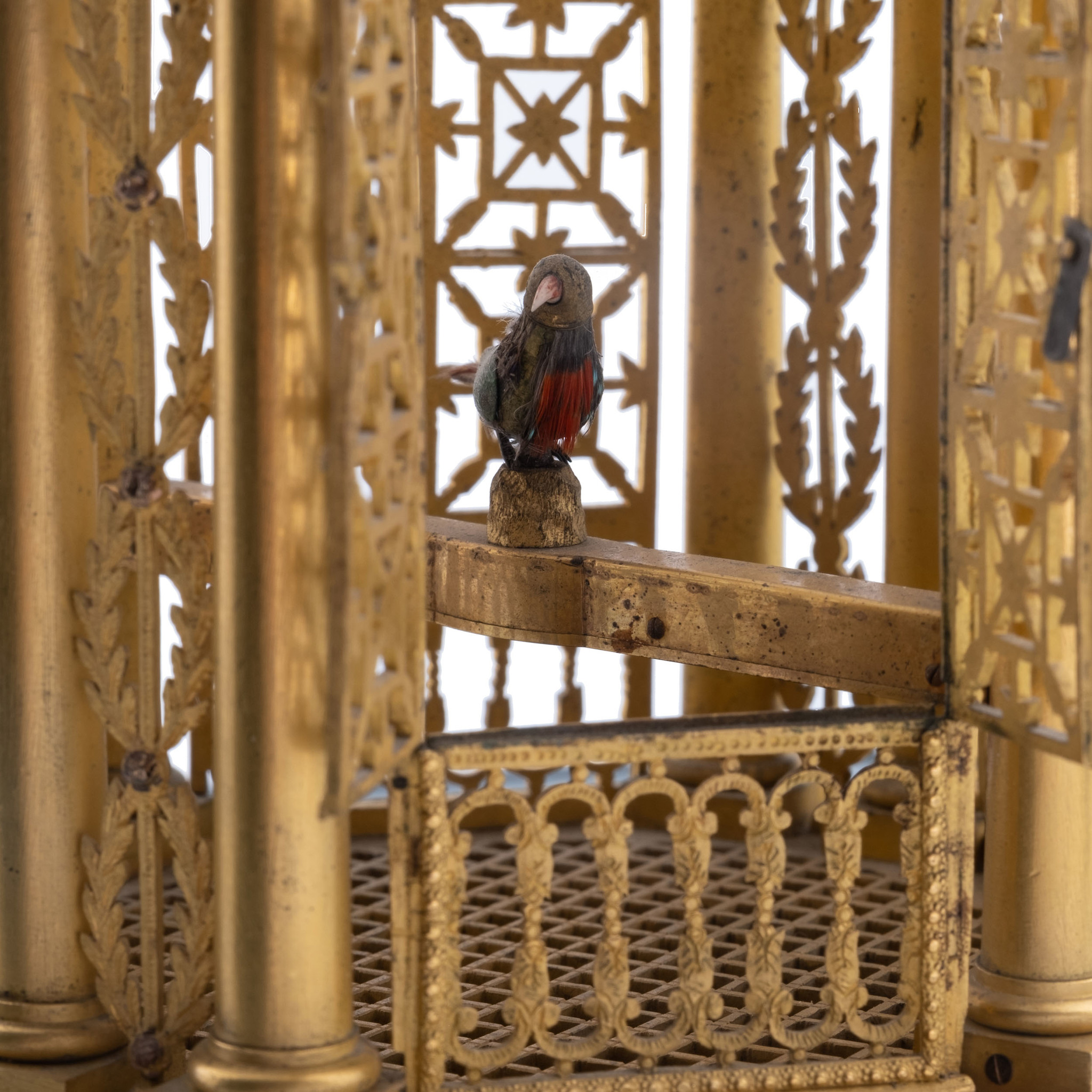 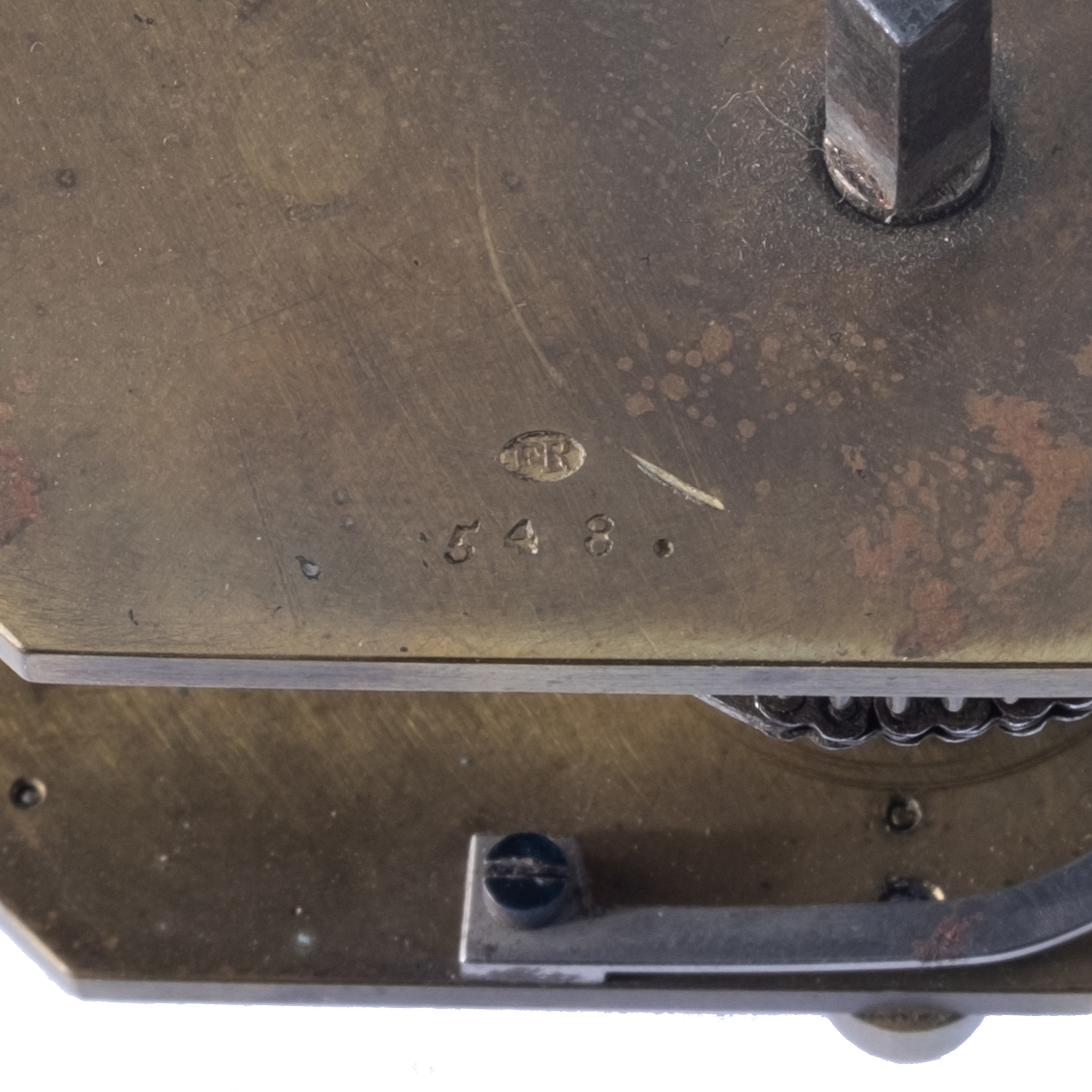 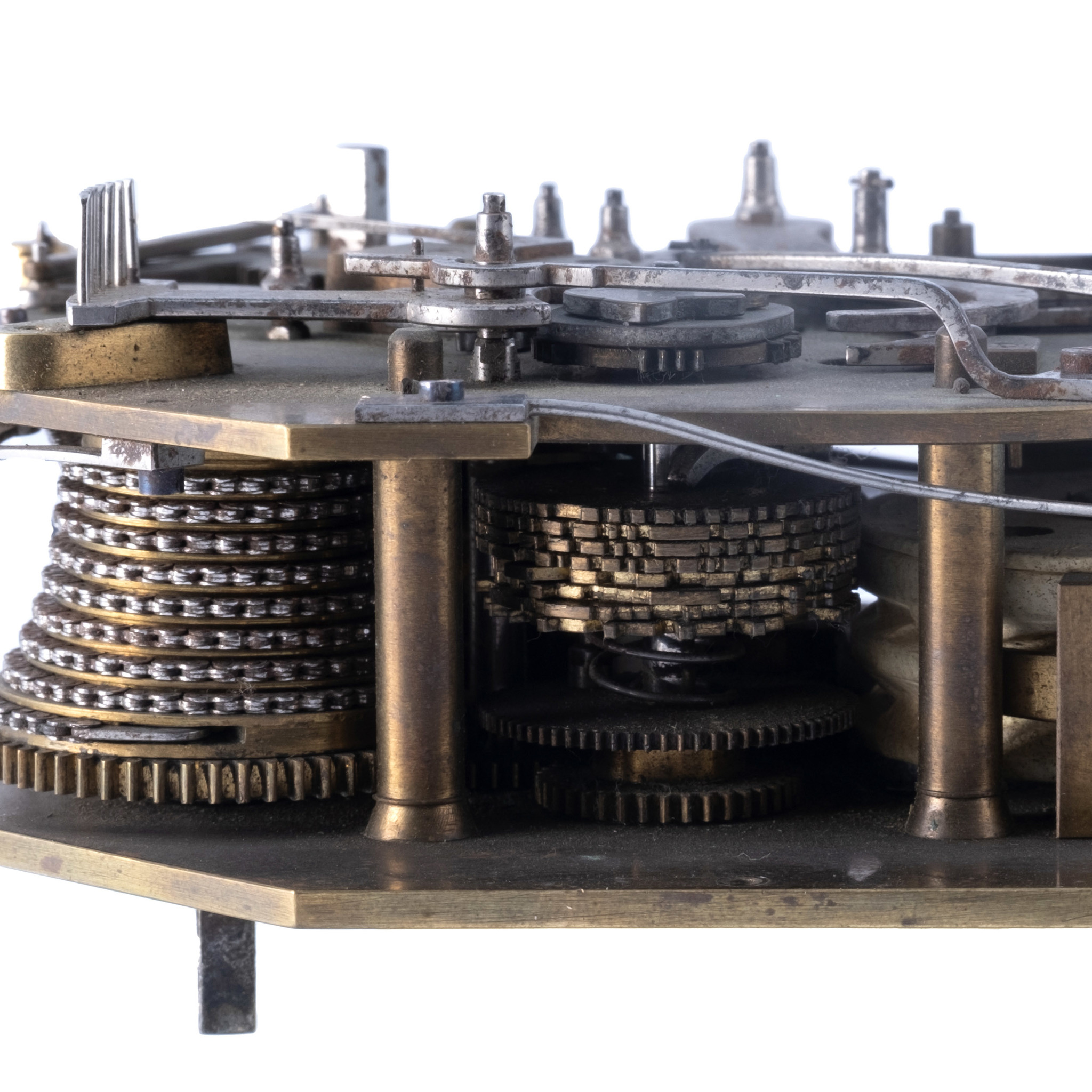 Miniature cages are among the most sophisticated and spectacular pieces of singing-birds. They are very rare and those with two mechanical birds are extremely rare. Depending on the period, various types of singing-bird/s cages exist: ceiling-hung cages with or without a time indicator, and free-standing cages with a watch and/or additional music).
They were made between 1780 and 1840. These objects are the work of various watchmakers and mechanicians from the Neuchâtel mountains, the Vallée de Joux or Geneva, who specialised in singing-birds. Among the best-known craftsmen (often active in Geneva) are: Pierre Jaquet-Droz (1721-1790) and his son Henry-Louis (1752-1791); Jean-Frédéric Leschot (1746-1824); Jacob Frisard (1753-1810); the Maillardet brothers: Henry (1745-bef.1830 ), Jean-David (1748-1834) and Jacques-Rodolphe (1743-1828); the Rochat family: David (1746-1812), his sons François-Elisée (1771-1836), Frédéric (1774-1848) and Samuel-Henri (1777-1854), as well as the children of the latter; the Bruguier family: Charles-Abraham (1788-1862), his son Charles-Abraham (1818-1891), his son-in-law Jacques (1801-1873), etc.
It is quite remarkable how, in such a small space, their makers were able to transfer the movements to all the wings, beaks and tails, and to rotate their birds. These movements are often ingeniously transferred via hollow columns; one column to rotate the body, the other to flap the wings and tail and open the beak. This is mechanically all the more remarkable when the cage contains two birds!
Whether these cages have one or two birds, whether they are made of precious metal or gilded metal, they remain one of the pinnacles of horological art (from a technical, historical and artistic point of view), worthy of a place in museums or the largest private collections.
To date, very few cages are known to exist, whether in gold or in chased and gilded metal (bronze), decorated or not with enamel or miniatures painted on enamel. Some of them can be admired with delight at the Patek Philippe Museum in Geneva. And, one should read with great interest the masterly work by Christian Bailly and Sharon Bailly-Kerman, Oiseaux de Bonheur, Tabatières et Automates – Flights of Fancy, Mechanical Singing Birds, Geneva, Antiquorum Editions, 2001.

It is generally thought that “F R” represents these Rochat brothers, although it is possible that the “F R” signature represents a single name: François Rochat or Frédéric Rochat.
There were other Rochats working in Geneva at this time! Among them, Louis Rochat (1781-1858), originally from the Abbaye in the Vallée de Joux. He is considered to be the maker of a piece with a clock, two singing-birds and a magician (now in the Beijing Museum) which won a prize at the “Réunion des Industriels” de Genève in 1829.
In 1814, Louis and his brother François (1792-1838) formed an association with Pierre-Daniel Campiche called “Frères Rochat et Compagnie”.
To complicate matters, there are many family and professional links between the various Rochats. For example, Louis Rochat of the Abbaye worked with Antoine (son of Frédéric) for a time, around 1850.
It is clear, however, that the Rochat family produced many of the finest and most complex singin-bird objects available.
For a fuller understanding of their histories, genealogies and works, please refer to the book and article below (which will be offered to the buyer of the item presented here).
Bibliography
· Bailly, Christian, & Bailly-Kerman, Sharon, Oiseaux de Bonheur, Tabatières et Automates – Flights of Fancy, Mechanical Singing Birds, Genève, Antiquorum Editions, 2001, pp. 210-260.
· Rochat, Loïc, & Marti, Laurence, “Les frères Rochat, créateurs d’oiseaux chanteurs, Une famille d’horlogers mécaniciens des XVIIIe et XIXe siècles”, in Revue vaudoise de généalogie et d’histoire des familles, Lausanne, 2014, pp. 189-226.