"PAR LES PÈRES" Attributed to George Michael Moser (1706-1783), London, circa 1780. Exceptionally fine and equally rare, 22K gold and enamel diamond-set, open-face, key-winding and setting, Neo-classical watch, with its matching chatelaine and breloques, probably made for a member of a Royal Family of Russia. 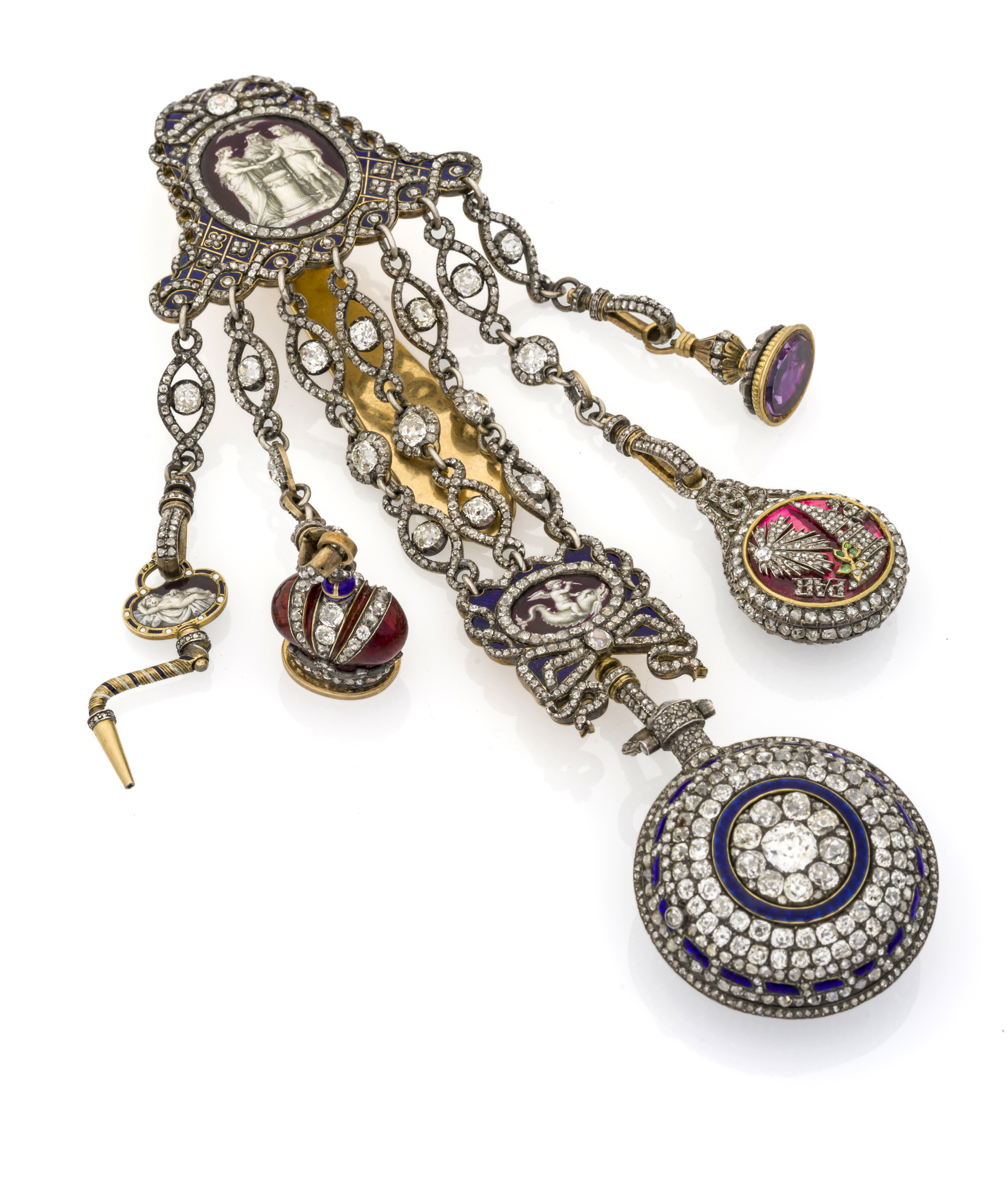 DIAM. 41 mm. Accompanied by a chatelaine with its clip, decorated with enamelled and diamond-set plaques forming a trellis with under ribbon knot two neo-classical allegorical panels painted en grisaille on maroon background; the largest with an Allegory of Marriage surmounted by a Dove or an Allegory of Equality between Man and Woman, the smallest with Cupid Riding a Dolphin; and five breloques: a gold and enamel key with two panels painted en grisaille on maroon background, with Putto;a gold seal set with several rose-cut diamonds in the shaped of a Royal closed crowns with six tiaras and red translucent enamel bonnet; a gold seal set with several rose-cut diamonds and an amethyst ;a gold locket contain a magnifying glass set with several rose-cut diamonds and emeralds with Masonic emblems (Eye of Providence, Pyramid, The Sprig of Acacia, Anchor, Wing) and the motto "TOI PAR / LES PERE", probably referring to a Masonic lodge. Chaitelaine: ~ L. 152 mm. Provenance Referenced by the owner of the Collection as coming from Empress Catherine II of Russia. Catherine II (......... II, Ekaterina II; Sophia Frederique Augusta Anhalt-Zerbst) Stettin, Pomerania (Kingdom of Prussia), May 2, 1729 - St. Petersburg, November 17, 1796 Empress consort of All the Russias (January 5, 1762 - July 9, 1762), then Empress and Autocrat of All the Russias (July 9, 1762 - November 17, 1796). She was known as "Figchen", then "Catherine the Great". George Michael Moser (1706-1783) On January 30, 1783, the "Gentleman's Magazine" reported that Moser "was followed to his grave in grand funeral pomp by all the capital artists, Sir Joshua Reynolds at their head as chief mourner, Sir William Chambers, etc. Ten mourning coaches, besides two gentlemen's coaches, were in the procession". In his obituary, published the same day, Reynolds said that as a gold chaser Moser "has always been considered as holding the first rank" and as the first Keeper of the Royal Academy "he possessed a universal knowledge in all branches of painting and sculpture which perfectly qualified him for the place that he held". Reynolds considered Moser the "Father of the present race of Artists," and said: "Few have passed a more inoffensive or perhaps more happy life; if happiness or the enjoyment of life consists in having the mind always occupied, always intent upon some useful art..." (Malone, l xxvi n). Moser worked as a chaser, enameller, medalist and designer not only for watchcases and gold boxes but for such things as candlesticks. He contributed to the decoration of the Rotunda at Vauxhall Gardens. Born in Schaffhausen on January 17, 1706, he learned chasing and gilding from his father Michael, a coppersmith. He moved to Geneva in 1725 and then to London in 1726. By the early 1730's Moser appears to have started to work for John Valentine Haidt, goldsmith and "Watch Chaser". Moser began what was to be a life-long course of study with him which was, according to the diary of Joseph Farington, "a little Academy for drawing from a living model". By 1737 Moser was working from his own address, Craven Buildings off Drury Lane, and his reputation was soon firmly established. He was at the vanguard of the revival of interest for enamel watchcases in the early 1750's. He was introduced to royal patronage by Lord Bute and, among other works for the royal family, designed the great seal of George III. For Queen Charlotte he painted enamel portraits of the royal children. Moser continued to work at least until the late 1770's, and was active for the Royal Academy until the end of his life. His association with Thomas Mudge began early in both their careers. Mudge's watch number 22 has an inner case hallmarked for 1738-39 and has the earliest recorded signed repoussé scene by Moser, while the last known association is a watch by Mudge and his partner Dutton, number 1062, from about 1775. There are approximately twenty surviving enamel cases signed by Moser, of which only two or three are after Sir Joshua Reynolds. One of these is of a portrait of Lady Caroline Spencer, wife of the fourth Duke of Marlborough, and another is, of course, Hope Nursing Love.