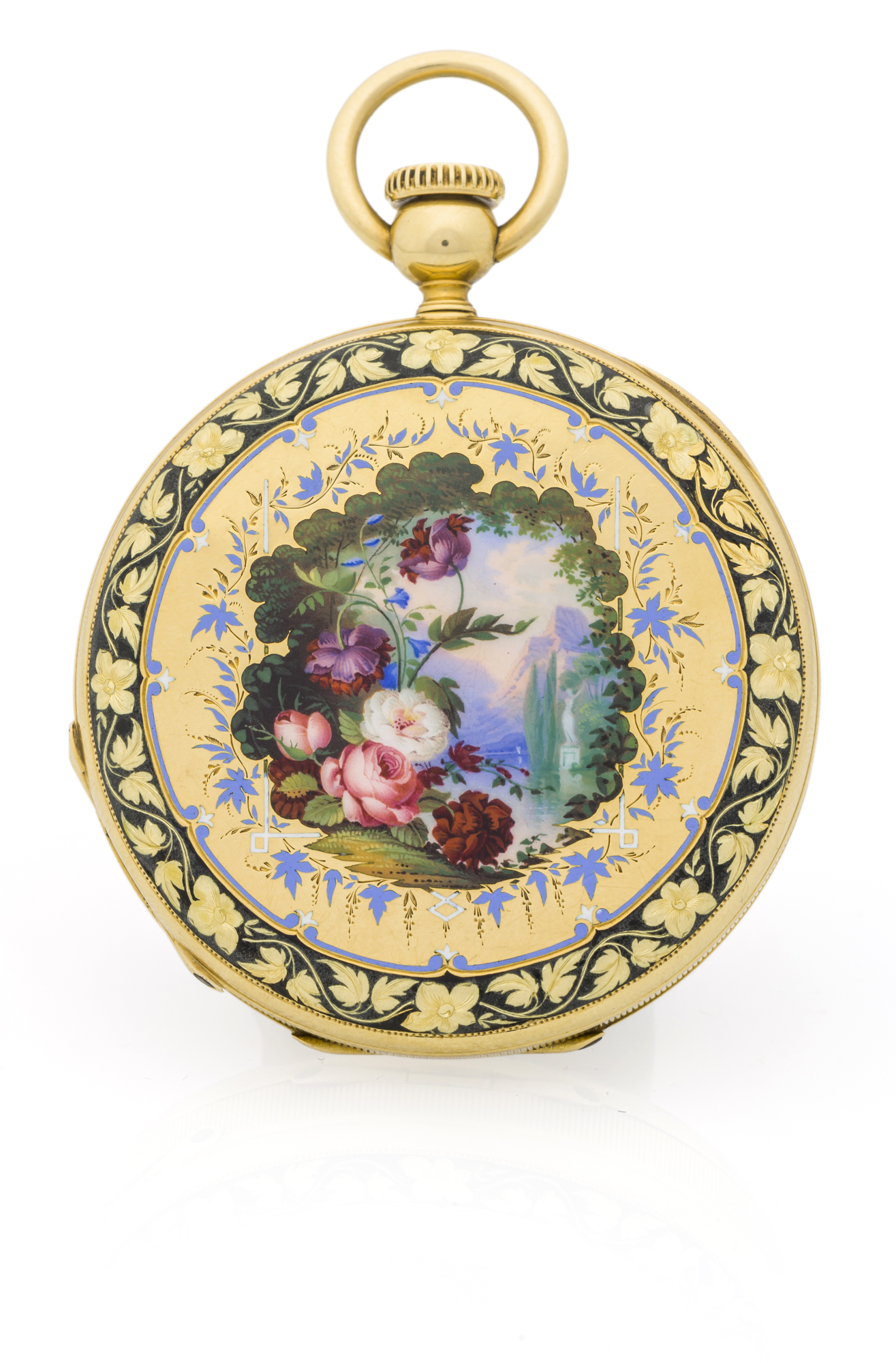 Signed on the cuvette (back dome); numbered on the plate under the dial. DIAM. 50 MM. Notes This watch signed "girard" is most likely made by Constant Girard (1825-1903), the future founder of the Girard-Perregaux House; like an impressive pocket chronometer, with a one-minute tourbillon regulator, sale by this auction house (see: Antiquorum, November 13, 2013, lot 557, for the amount of CHF 123 750.- including buyer's premium). The ébauche of the movement, with its early keyless-winding and setting system - in which it is no longer necessary to use a key to wind and set the watch -, can be attributed to few makers of which Antoine LeCoultre (1803-1881), from Le Sentier in the Vallé de Joux, is probably the manufacturer. His first system "à bascule" was invented in 1847. Four years later, he received a Gold medal for his work on precision and mechanisation in watchmaking at the first Universal Exhibition in London (Crystal Palace, 1851). The system used in this watch is probably a development made by LeCoultre of his invention. As early as the end of the 18th century, watchmakers sought to make keys unnecessary by the invention of winding - and sometimes setting - mechanisms integrated into the watch itself. In Switzerland at the end of the 1830's and during the 1840's, such mechanisms were devised by Louis Audemars (1782-1833), Antoine LeCoultre (1803-1881) and Adolphe Nicole (1812-1876), from the Vallée de Joux. During the same period, Adrien Philippe (1815-1877) was experimenting with this type of mechanism in Paris. It is to Philippe - who settled in Geneva in 1845 and became co-founder of Patek Philippe - that we can attribute the form of pendant winding still in use today. The painting on enamel scene can be attributed to the Genevan workshop of Gaspard Lamunière (1810-1865), the greatest painter of this time. Constant Girard (1825-1903) After a happy childhood, Constant Girard (born Othenin-Girard from the name of his father and his mother; at this time is was traditional in the Neuchâtel Mountains to associate his name with that of his wife when married) learned the watchmaker's trade, slowly and patiently absorbing its secrets as they were passed on by demanding master craftsmen. After training and working, he associated (1845) with the watchmaker C. Robert from La Chaux-de-Fonds. Around 1852, Constant Girard and his elder brother Numa founded a watch manufacturing company in La Chaux-de-Fonds; they called it "Girard & Compagnie". Barely two years later, at the age of 29, Constant Girard married Marie Perregaux (1831- 1912), the daughter of a marchand-horloger from Le Locle, Henri-François Perregaux (1797-1847). In 1856, the name of the company was changed to "Girard-Perregaux"; Constant having taken to using both family names. He was very technically minded, devising fine time-measurement instruments for his customers. Constant Girard-Perregaux marks its era, a perfectionist, he was constantly trying to design increasingly sophisticated, meticulously fashioned movements. His years of experimenting and experience culminated eventually in the three parallel bridge construction. Performance took on greater importance, spurring the development of progressively more complex and accurate watches, with an increasing variety of indications. This was the heyday of chronometry and observatory contests between the great watchmakers of the period. Constant Girard-Perregaux was a talented contestant, winning no less than 13 Gold Medals and several other distinctions (medals and diplomas) at industrial exhibitions in Switzerland, Europe and America. His business is growing rapidly, until America and Japan. Lamunière, Gaspard (Genève, 15 mai 1810 - Nice, 6 avril 1865) Peintre et émailleur, pratique la peinture à l'huile et sur émail, portraitiste et maître d'atelier d'émaillerie. Elève de Joseph Hornung (1792-1870) et Jean-Léonard Lugardon (1801-1884). Il ouvre un atelier où il travaille avec sa femme Louise Franel (1819-ap.1865), puis sa nièce. Il expose à Genève, dès l'âge de 18 ans (Genève, Société des Arts, juin 1828, No 21, "Deux copies de portraits en émail"), puis régulièrement des séries de portraits peints sur émail ou à l'huile. Il a de nombreux élèves, tant dans le domaine de la peinture sur émail que dans celui à l'huile : Françoise (dite Fanny) Chatel (1832-1874) ; Philippe Prochietto (dit Prochet ; 1825-1890) ; Jean-Marc Baud (1828-1907) ; Jules Crosnier (1843-1917) ; Edouard Ravel (1847-1920) ; etc. To be sold without reserve