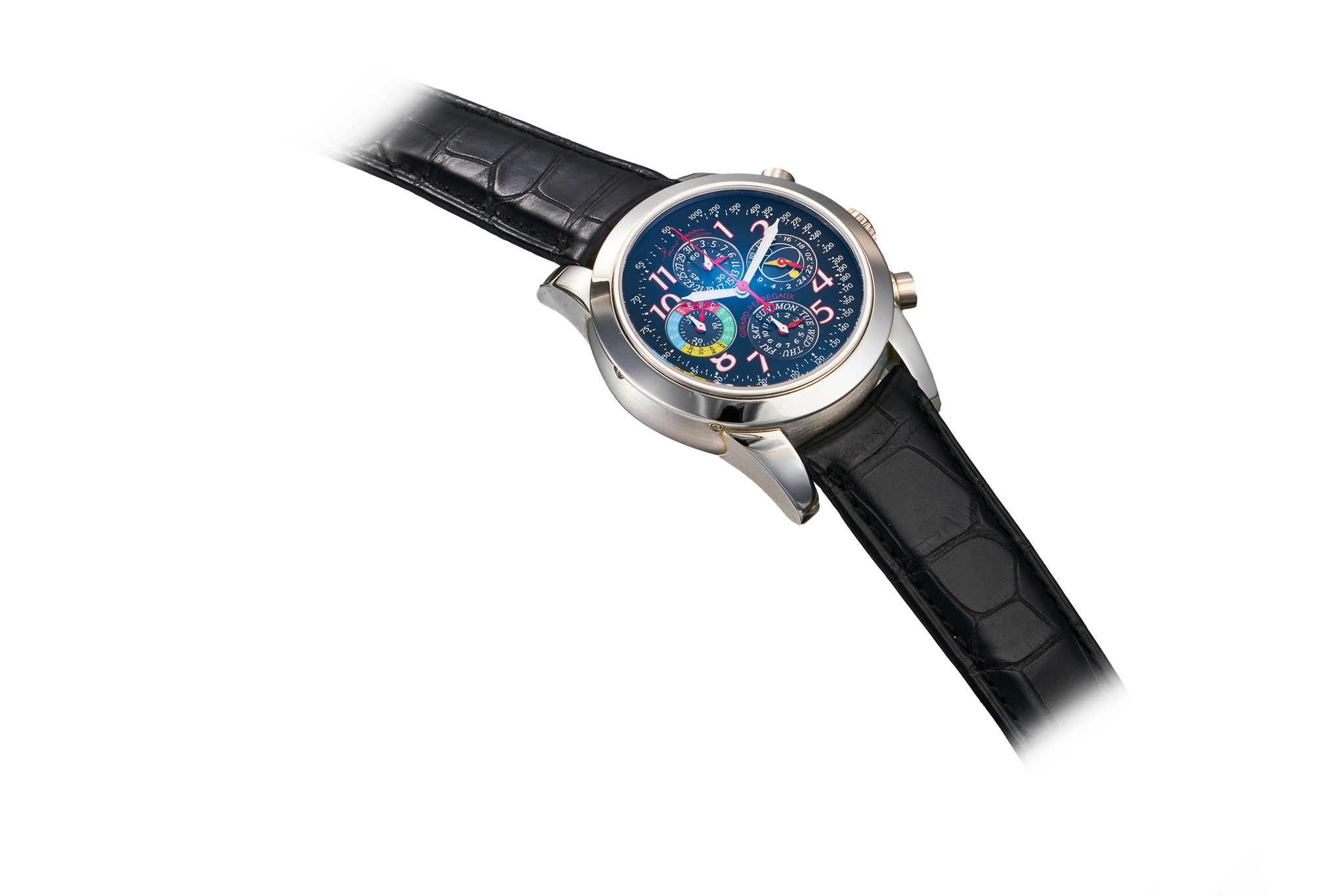 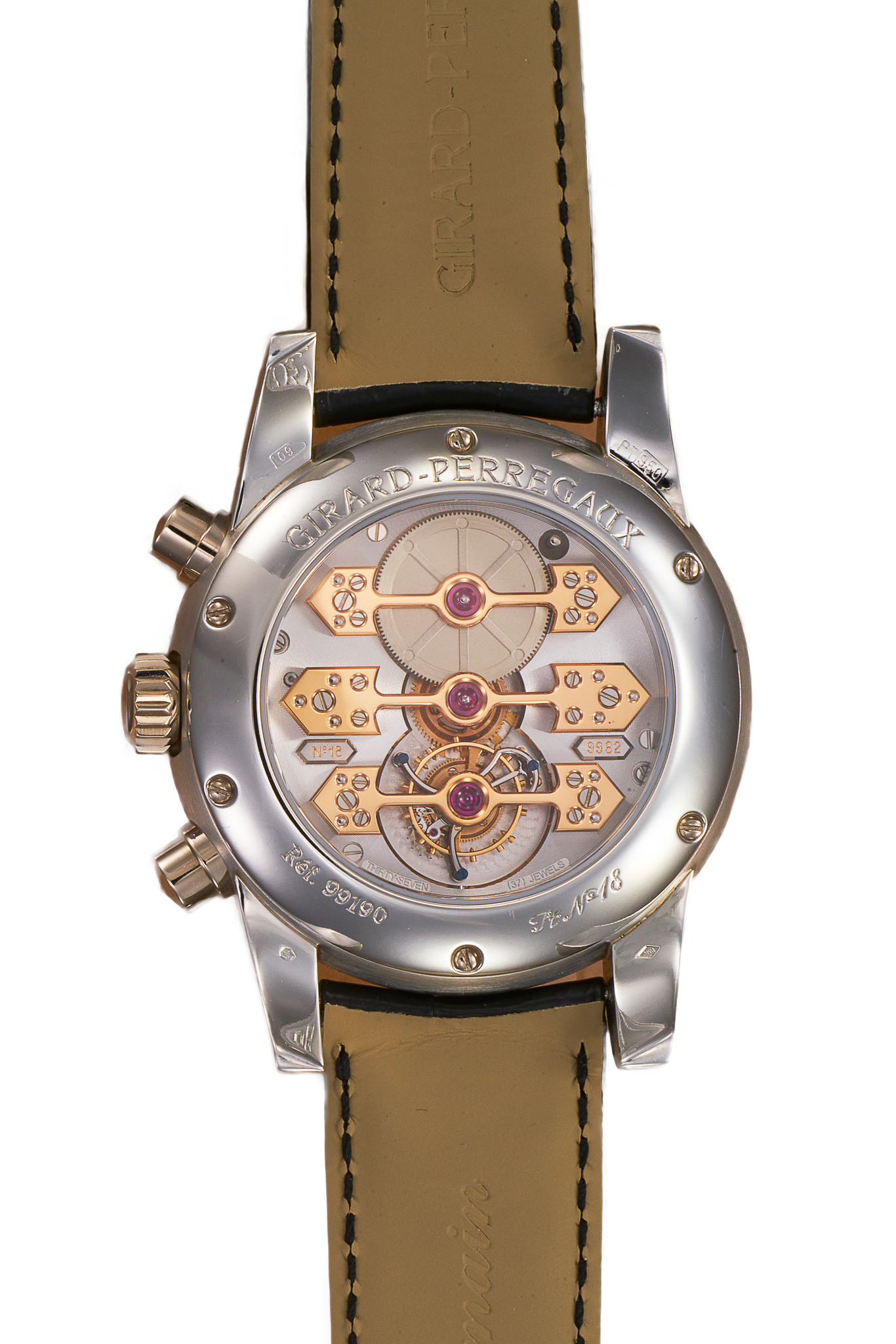 Model “Tribute to Enzo Ferrari”; limited edition of 349 pieces, No. 18

Girard-Perregaux, Tribute to Enzo Ferrari
To celebrate ten years of fruitful collaboration and to match the “Enzo Ferrari” model, the designers at Girard-Perregaux Manufactory created a master timepiece whose manifold technical and aesthetic details perfectly harmonises with the extreme concept of Formula 1.The World Premier of this watch was held in Shanghai on March 9, 2004. 349 examples of the “Enzo Ferrari” tribute wristwatch were made to equal the 349 examples of “Ferrari Enzo” car launched in 2002.
Girard-Perregaux for Ferrari
Between 1994 and 2004, Girard-Perregaux and Ferrari were in partnership with a co-branding agreement which gave birth to an extraordinary collection of watches with chronographs and complications. The present watch, a tribute to “Enzo Ferrari” is one of the most remarkable pieces from this collection showcasing the manufacturer’s iconic “Three Golden Bridge Tourbillon”. The design proved to be one of the most successful watch movement designs ever. It has been used by Girard-Perregaux up to the present day. Their most prestigious watches, the 13’’’ wrist tourbillons use the same design. The simple and bold yet elegant layout of the “Three bridge” movement lends itself to the display of the tourbillon regulator. Pellaton, Grether and Guinand cages were used as well as Girard-Perregaux’s own cage. At the Paris Universal Exhibition of 1889, Girard Perregaux received the highest of all awards, a Gold Medal for excellence, for his famed three-bridge Tourbillon.
Girard-Perregaux, “Trois Ponts d’Or” (Three Gold Bridges)
On March 25, 1884, a design patent (No. 14 919) was filed in the USA patent office stating: “Be it known that I, Girard Perregaux of Chaux-de-Fonds, Republic of Switzerland, have invented and produced a new and original Design for a Watch-Movement, of which the following is a full, clear and exact description: ‘In a watch movement the design for a bridge, consisting a bridge having a central annular portion, spread out ends and bar-like portions between the said annular portions and ends, as shown’.”.
The “Enzo Ferrari” car
The “Enzo Ferrari” is a 12-cylinder mid-engine “Berlinetta” named after the company’s founder, Enzo Ferrari. The super automobile is currently one of the most powerful naturally aspirated production car in the world. It was built in 2003 using Formula 1 technology, such as a carbon-fibre body, Formula 1 style sequential shift transmission and carbon-ceramic brake discs. The engine is Ferrari’s F140 6.0 L V12 with 4 valves per cylinder, dual overhead cams and variable valve timing.

Enzo Anselmo Ferrari (1898-1988)
Born in 1898 in Modena Italy, was the founder of the Scuderia Ferrari Grand Prix motor racing team, and subsequently of the Ferrari car manufacturer. His father, Alfredo, ran a metal business. When he was 10 his father took Ferrari and his brother Alfredo Jr. to an automobile race in Bologna, where he saw Vincenzo Lancia battle Felice Nazarro in the 1908 Circuit di Bologna. After attending a number of other races he decided that he too wanted to become a racing car driver. In 1916, tragedy struck his family, with the death of his father and brother in one year. After the war he took up racing and in 1919 he finished ninth at the Targa Florio. In 1929, Ferrari started his own firm, Scuderia Ferrari. He was sponsored in this enterprise by the Ferrara-based Caniano brothers, Augusto and Alfredo, heirs to a textile fortune. Ferrari remained managing director of his firm until 1971. Despite stepping down he remained an influence over the firm until his death in 1988.