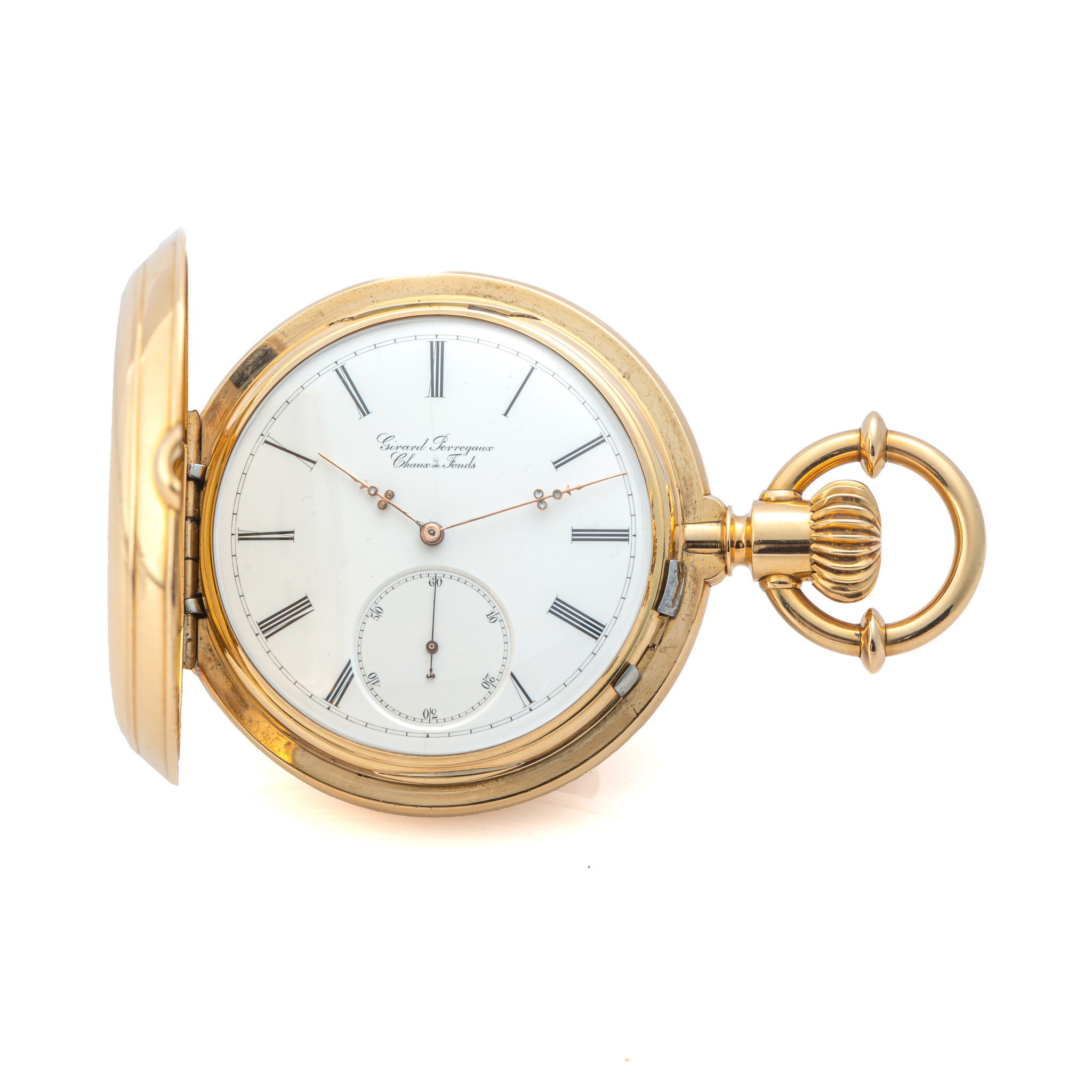 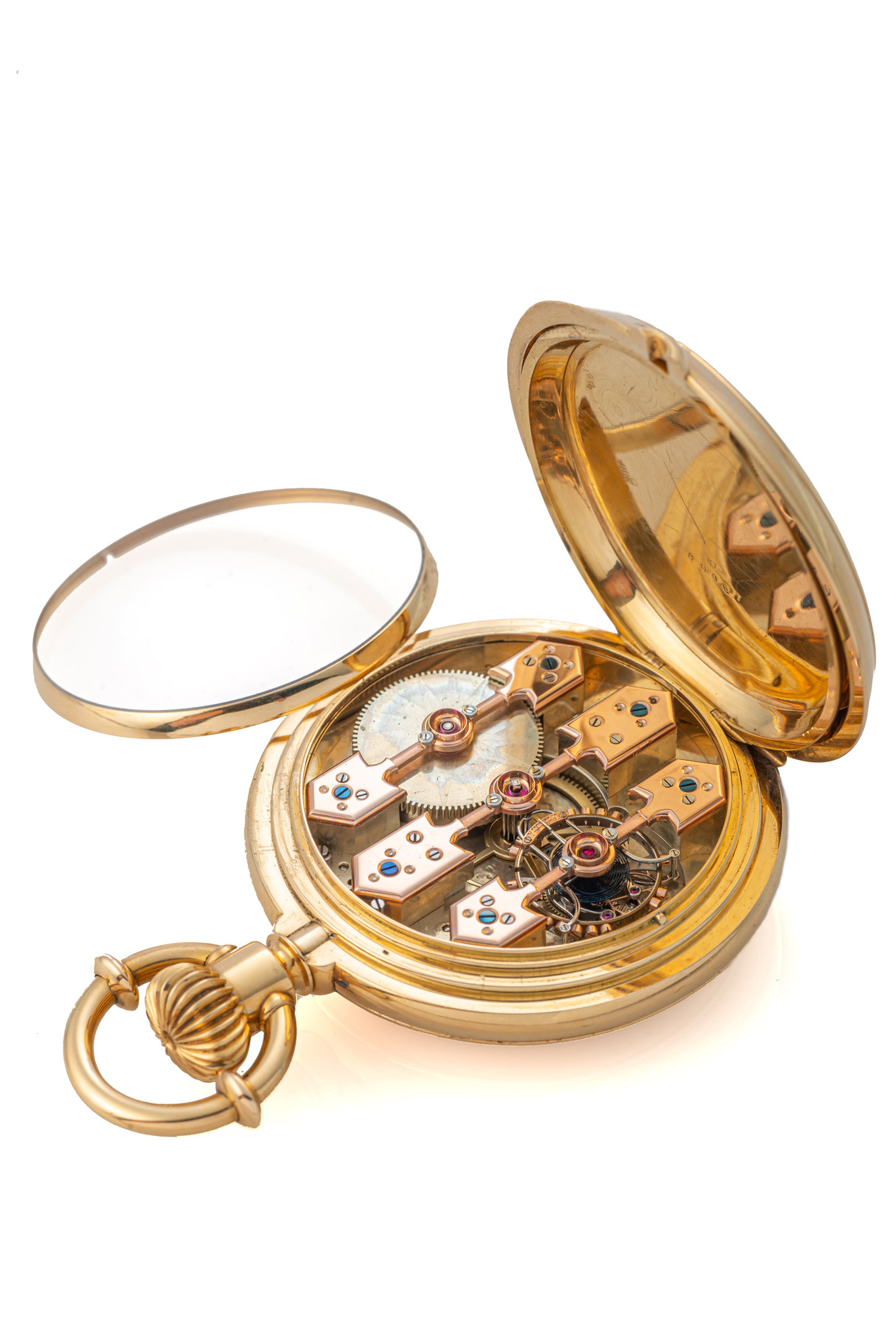 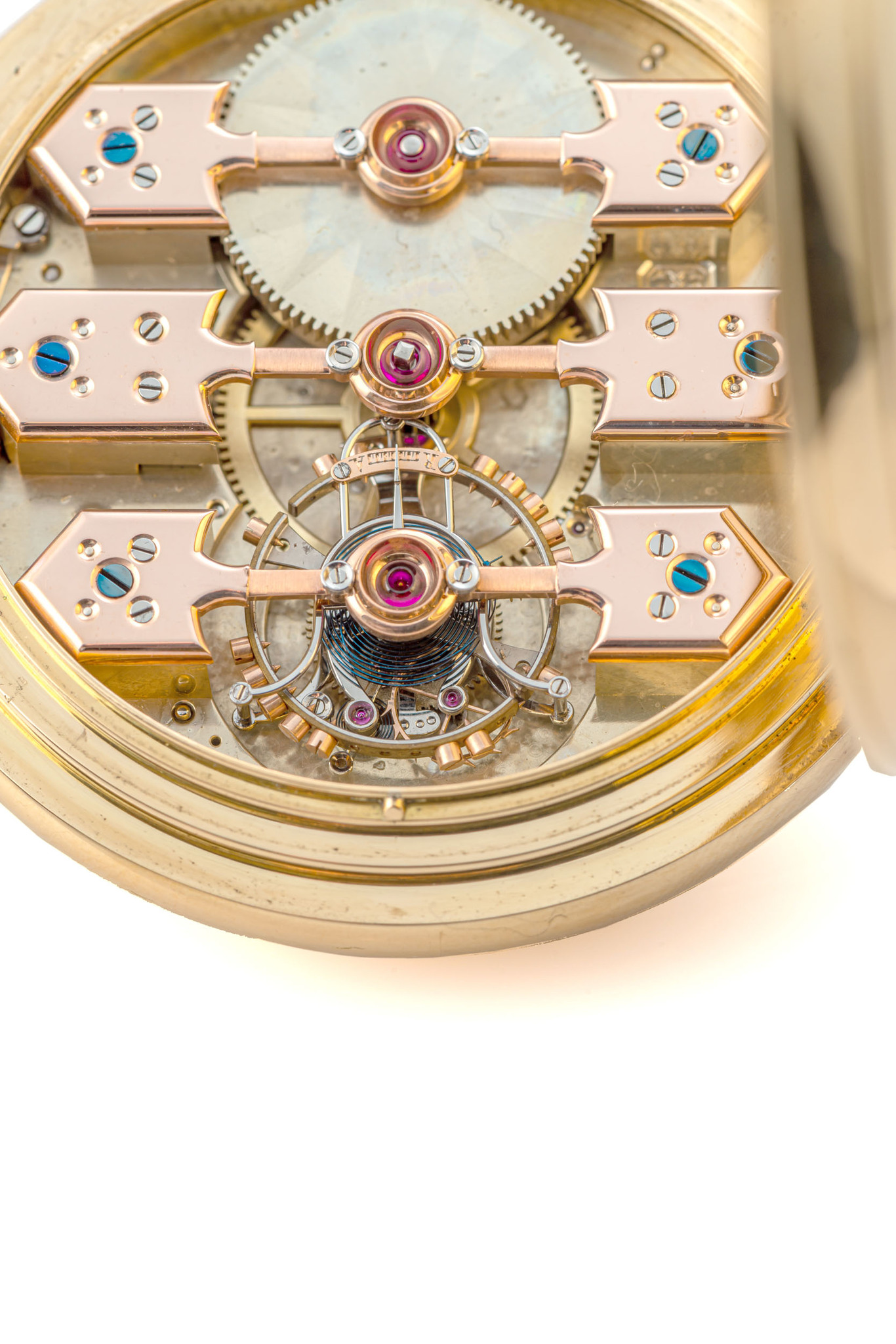 A very similar chronometer tourbillion is in the collection of Girard-Perregaux and is described and illustrated by Reinhard Meis, in ‘’Le Tourbillon’’, Editions de l’Amateur, Paris 1990, p.145. The patent for the “three bridge” tourbillion watches (No. 144919) was filed in the USA patent office on 25th March 1884: “Be it known that I, Girard Perregaux ... have invented and produced a new and original Design for a Watch-Movement, of which the following is a full, clear and exact description: ‘’the design for a bridge, consisting a bridge having a central annular portion, spread-out ends and bar-like portions between the said annular portions and ends” The design, which proved to be highly successful, has been used by Girard-Perregaux ever since. Today, their prestigious 13’’’ wrist tourbillon uses the same design. At the Paris Universal Exhibition of 1889, Girard Perregaux received the highest of all awards, a Gold Medal for excel-lence, for his famed three-bridge Tourbillon. Its technical and aesthetic perfection and its impressive finish soon became an unquestioned reference. Due to their extreme complexity, only a handful of these timepieces were ever produced.

GirardPerregaux
The origins of the firm can be traced back to Jean-François Bautte, who was famous for his extra-flat watches and founded a manufactory in Geneva in which all the various facets of the trade were housed under one roof. In 1837, Jacques Bautte and Jean Samuel Rossel took over the firm. In 1852, Girard & Cie was founded by Constant Girard, who married Marie Perregaux. The combination of their names resulted in the Girard-Perregaux Company, founded in La Chaux-de-Fonds in 1856. In 1903, Constant Girard-Gallet succeeded his father as director of the firm. In 1906, he acquired the maison Bautte, merging it with Girard-Perregaux et Cie. In the early 20th century, Count von Zeppelin used Girard- Perregaux timepieces during aeronautical experiments. In 1928, the German
watchmaker Otto Graef, owner of the MIMO Brand (Manufacture Internationale de Montres Or) took over the capital shares of Girard- Perregaux. In 1998, the firm acquired the Villa Marguerite, a turnof- the century building, which was renovated to house the new Girard-Perregaux Museum. In 1999, Girard-Perregaux presented a self-winding version of its famous Three Gold Bridges Tourbillon, thanks to an ingenious system (patented in 1999) featuring a platinum micro-rotor under the mainspring.

Ernest Guinand
Ernest Guinand (c. 1810-1879). Guinand was an important Master Horologist from Le Locle, who, along with Auguste Grether from Ponts-de-Martel (1817-1879), specialized in the production of tourbillon carriages. According to the records of the Neuchâtel Observatory, Guinand’s production of tourbillons began between 1865 and 1867. He designed three models of Tourbillon carriages, always based on an A-shaped frame. He worked for several important makers, including Girard-Perregaux and Montandon. Most of Guinand's carriages were equipped with a pivoted detent escapement, one with spring detent and some with lever escapement. Most of his carriages were not signed and can only be identified by their characteristic A-shape. In 1864 Patek Philippe chose him to build their first tourbillon regulator.