18K yellow gold and enamel, open-face, key-winding, round-shaped, pocket clock-watch with silver guilloché engine-turned dial and four horological complications: Quarter-repeater à poussoir on one bell (activated by the round push-piece located on the pendant), Grande Sonnerie au passage, Petite Sonnerie au passage (position lever of "S" (Sonnerie - strike) and "N" (Non sonne or Silence - no strike), at 2 o'clock, and, position lever of "Grande Sonnerie / Petite Sonnerie", at 10 o'clock), Alarm on the same bell (concentric blued steel index, time-setting by push-bolt setting at 5 o'clock) Bezel, case-band and case-back engraved and enamelled in champlevé with taille d'épargne decoration of friezes and foliages, with, on the centre, the coat-of-arms and the motto "To Mniey Boli" of the Zamoyski Family from Poland. 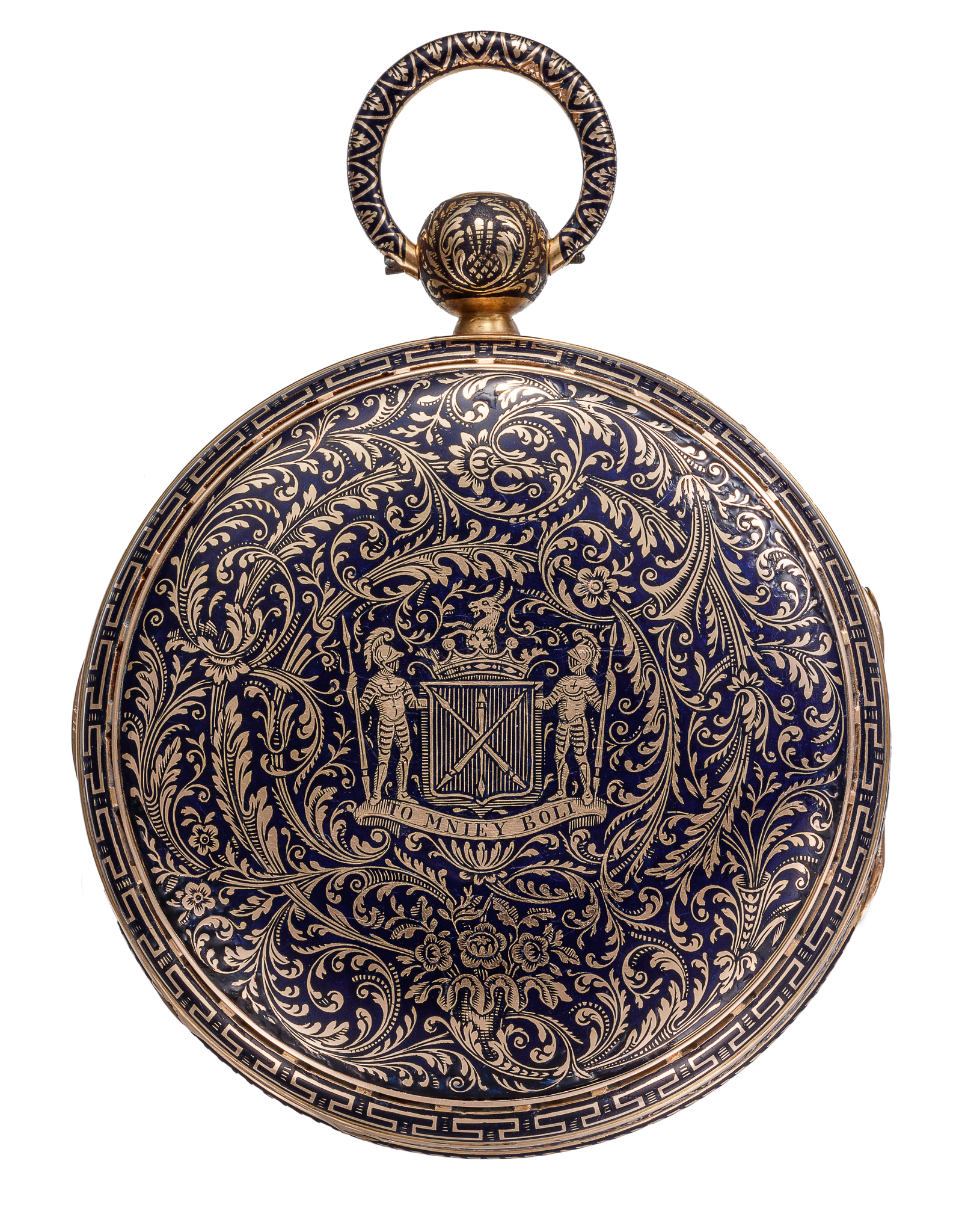 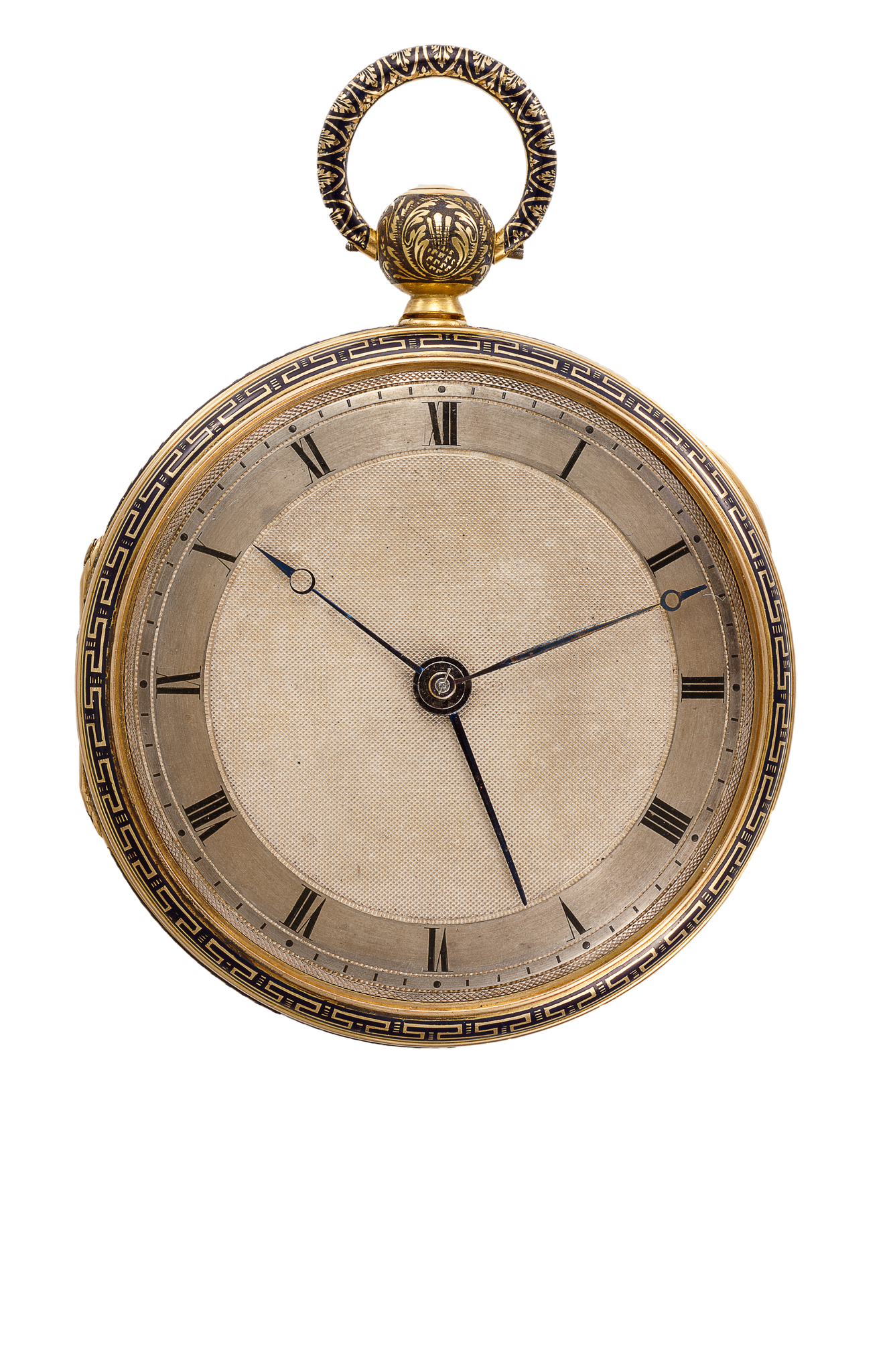 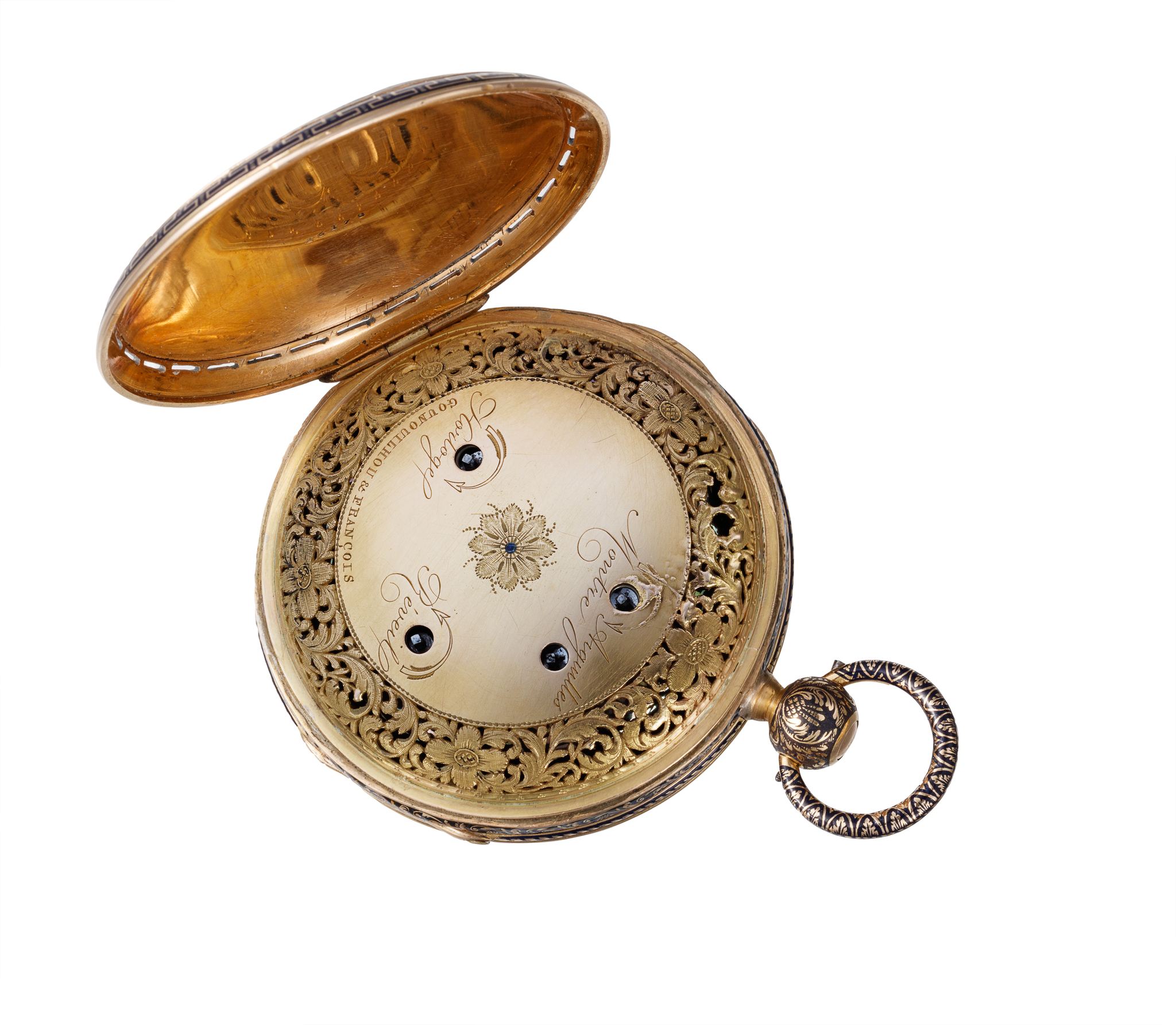 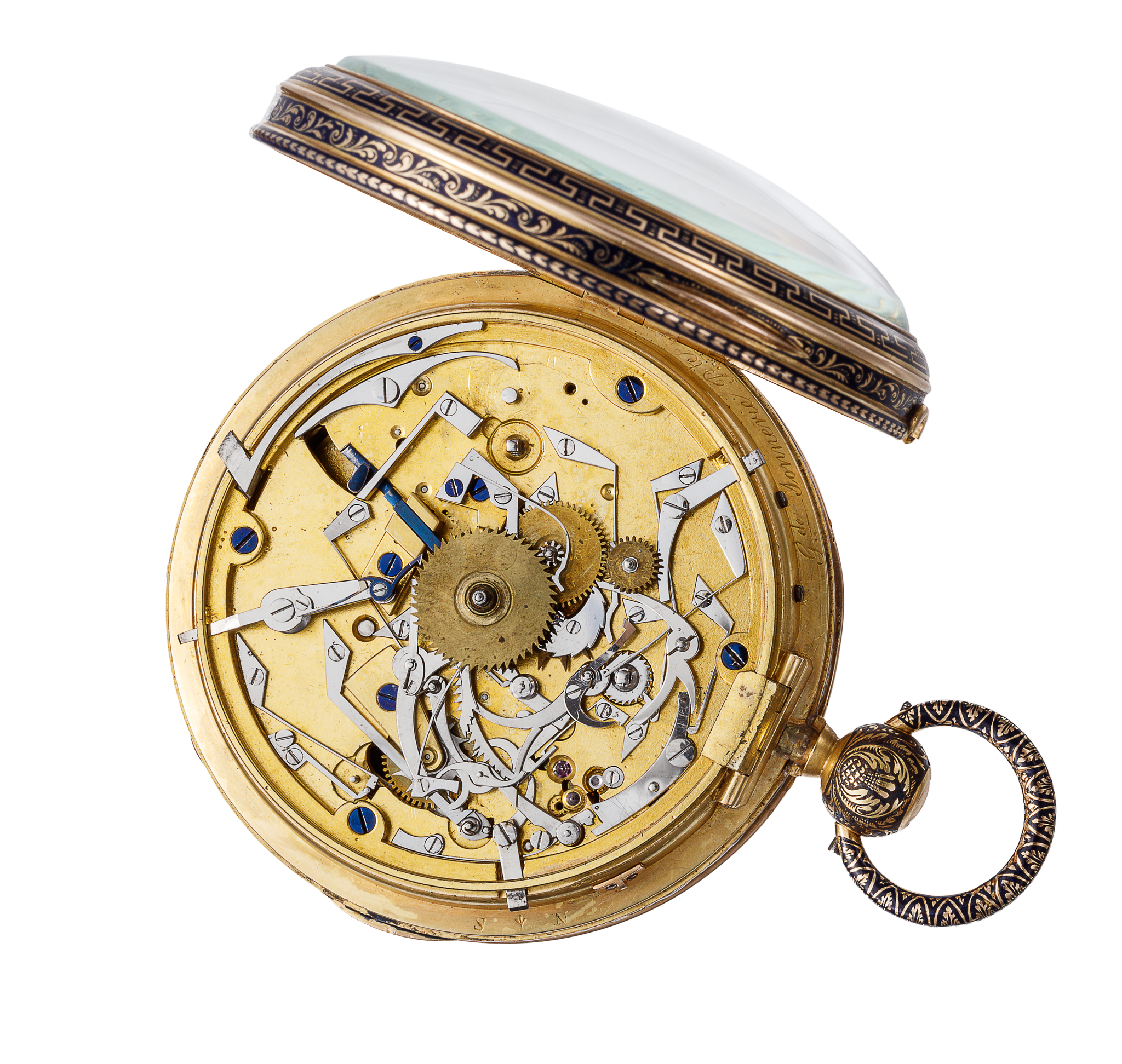 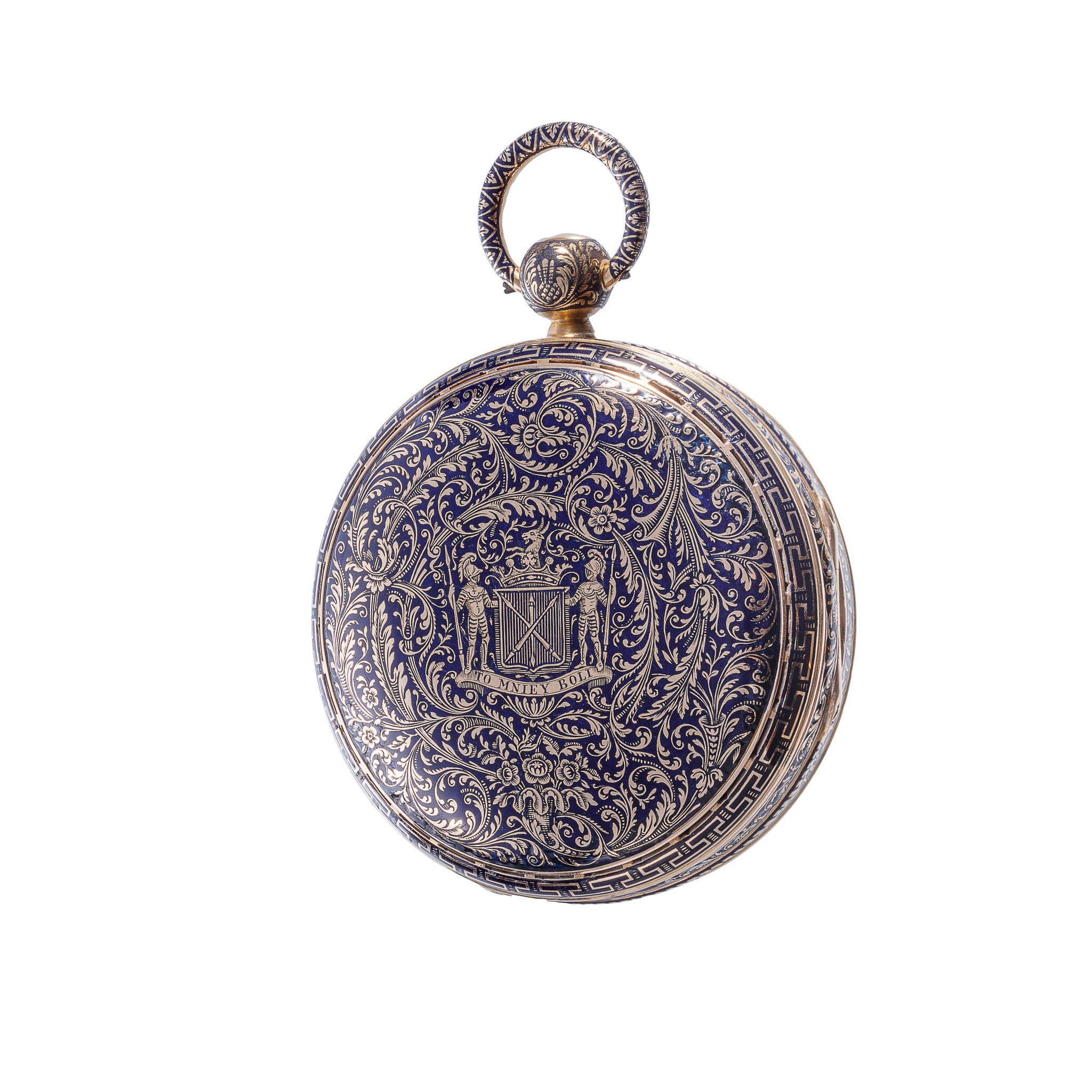 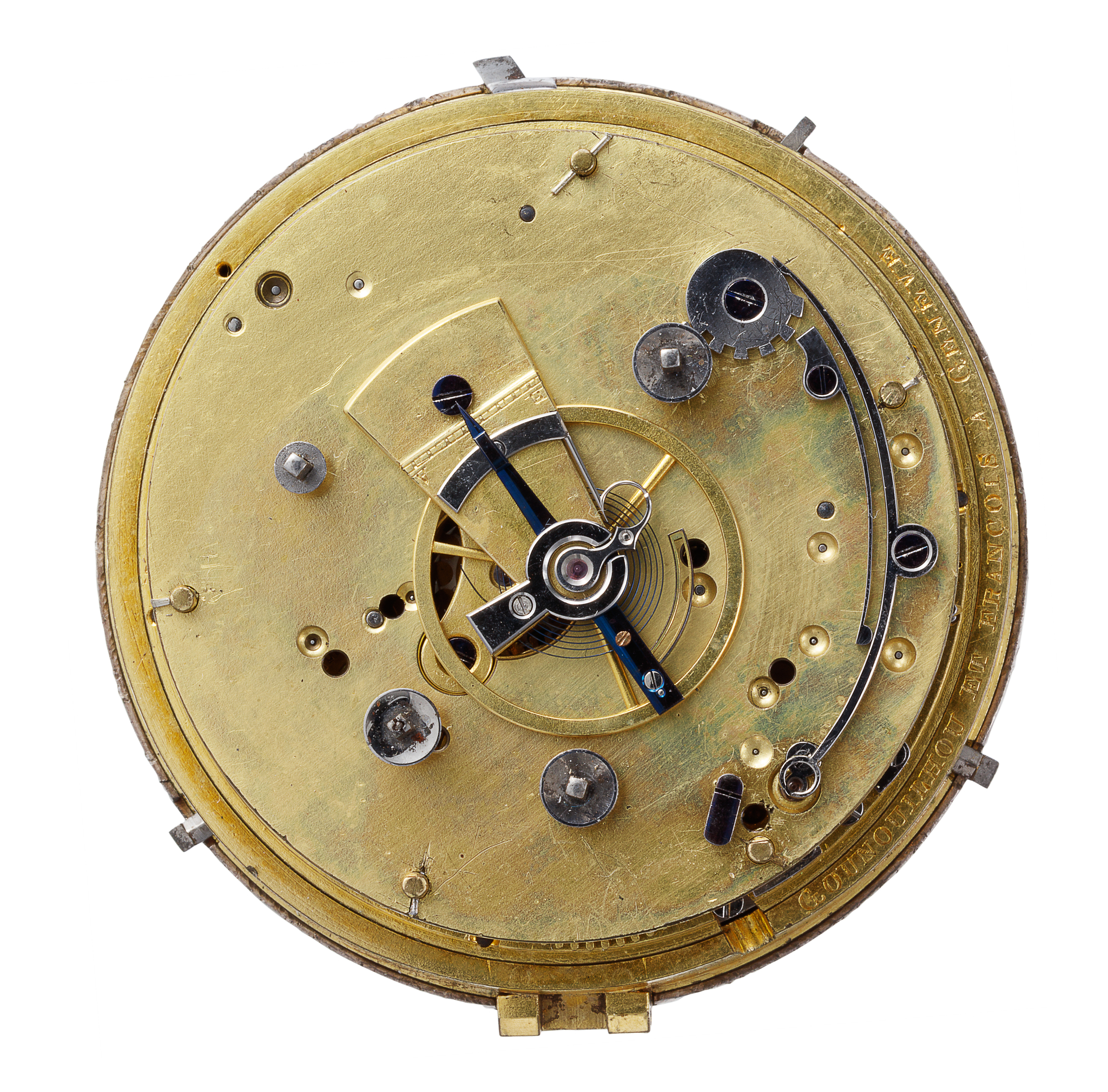 One of the most complicated watch that are executed in watchmaking In 1828, Gounouilhou & François were present at the first Geneva Industrial Exhibition, organized by the Société des arts (Arts Society's) Class of Industry and Commerce, and showed a clock-watch movement with Grande and Petite Sonnerie with independent repeater, built with 210 components, which to be completed in pocket watch still requires 65 pieces, totalling 275; while mentioning in the catalogue that "Ce genre de pièce est un des plus compliqués qui s'exécutent en horlogerie." (This kind of piece is one of the most complicated ones that are executed in watchmaking.). This is a watch movement similar to that of our piece. For the time, as evidenced by the quote mentioned above, it is the pinnacle of watchmaking art. A few Genevan watchmakers were at that period specialized in this type of production, as Decombaz (?-?) who manufacture for Abraham-Louis Breguet (1747-1823) of Paris. Himself targeting them to his best clientele, often for the Russian market or the Ottoman market. What are Grande Sonnerie and Petite Sonnerie? The Grande Sonnerie or "Grand Strike" strikes the hours and quarters "en passant" (in passing), that is to say automatically, and repeat the hours to the quarters. It can also repeat, at will, by the action of a pusher, hours and quarters past, indeed minutes. The Petite Sonnerie or "Petit Strike" strikes the hours and quarters "en passant" (in passing), that is to say automatically, without repeating the hours to the quarters. Gounouilhou, Pierre-Simon Bergerac, Dordogne, October 15, 1779 - Peissy, Satigny, near Geneva, 1847 Comes from a French Protestant family from Bergerac in Dordogne, Pierre-Simon Gounouilhou is the son of Dominique Gounouilhou (1741-1820), master cobbler, and Elisabeth Andrau (1753-1813); both married in Sainte-Foy-la-Grande in Gironde in 1774 (December 26). His older brother, Pierre Gounouilhou (1777-1859), is a well-known gunsmith and merchant in Bergerac, who made his apprenticeship in the "Manufacture nationale d'armes" (National Manufacture of Weapons) in Versailles (1793-1818), under the direction of Nicolas-Noë Boutet (1761-1833), famous French gunsmith. His younger brother, Pierre-Jean Gounouilhou (1788-ap.1835) is a watchmaker; after the death of his wife, who died childless, he went to Montevideo in Uruguay to join his nephew Dominique (Désiré) Gounouilhou, who has been there for quite long time. Part of the Gounouilhou family is active in the field of printing in Bordeaux, in Gironde, since the early 17th century, and will be still in the 19th century. He is credited with a number of ring-watches with visible balance, with virgule or cylinder escapements, with or without quarter-repeater, produced in the first quarter of the 19th century. He is given the model of automaton watch called "La Cuisine" (The Kitchen), whose an example is signed by him (see: Jaquet & Chapuis, 1945, pl. 102). On February 28, 1822, he is the author of a text in which he protests to Antoine Tavan (1749-1836) against a prospectus that would have described Genevan watchmaking in a negative way and undertakes to defend the Fabrique ("Lettre adressée par un fabricant d'horlogerie à M. Tavan père, en réfutation des faits contenus dans un prospectus signé M. A. Demole", Geneva, from the Imprimerie No. 142 au haut des Barrières, 1822, 8 pp.). On February 3, 1823, he received Citoyen (Citizen) of Geneva, listed as "Marchand horloger" (Merchant Watchmaker). In 1826, he also took an interest in the education of young people in Geneva, especially that of the very young (3-6 years old); he has written several texts for the creation of the "Ecole des petits enfants de Saint-Gervais, rue Rousseau" (Saint-Gervais School of Little Children, Rousseau street), in the watchmaking district. On February 2, 1829, he signs, with many watchmakers, the petition for the establishment of a new astronomical observatory in Geneva. In a text dated February 12, 1839, he proposed a subscription for the construction of a bridge in a remote corner of the canton of Geneva that would allow the inhabitants of some neighbouring hamlets to come to town without passing through France; in the far west of Geneva territory, the A"pont des Granges A" (Granges bridge) will be built on the Allondon river in 1842. On June 5, 1843, he was named Mayor of the commune of Satigny (north-west of Geneva). We know under the signature "Gounouilhou and François" various watches with horological complications (repeater, date) and / or decorative cases enriched with stones or enamels. Between 1842 and 1870, the corporate name became "Tissot & Gounouilhou". It is Louis Gounouilhou (?-?) who directs the House. We know under this signature watches with ultra-flat inverted calibre, known as Bagnolet, of high quality and different dimensions. This signature also appears on a square-shaped watch with quarter repeater, measuring 25 mm. side by 12 mm. height. Pierre-Simon Gounouilhou left "shop notes" with abundant information on the habits and customs of the Genevan watchmakers of his time. Less known than Jean-François Bautte (1772-1837), he remains an important figure in the watchmaking Geneva of the first half of the 19th century. Zamojski (plural: Zamojscy) or Zamoyski This is the name of an important Polish noble (szlachta) family, which used the Jelita coat-of-arms. The family's name is sometimes spelled "Zamoyski". It is the Polish term for "de Zamosc" (Polish "z Zamoscia"), the name they originally held as lords of Zamosc. The family was influential in Polish politics for several centuries, and its members held various official titles, including those of Count and Countess. Zamoyski, Stanislaw Kostka, Count of Herb Jeltia Stanislaw Kostka Zamoyski (January 13, 1775 - April 2, 1856) was a Polish nobleman (szlachcic), politician, landowner, and patron of arts. Stanislaw was the 12th Ordynat of Zamosc estates. In 1809 he became the chairman of the "Provisional Government" (rzad tymczasowy) of Galicia. He was Senator-Voivode of the Duchy of Warsaw and the Polish (Congress) Kingdom from 1810 until 1831. He founded the Zamoyski Ordynacja Library and was chairman of the "Agricultural Society". He was awarded the Order of the White Eagle on June 16, 1812. In 1822 Stanislaw became the chairman of the Senate in the Polish (Congress) Kingdom. He married Princess Zofia Czartoryska on May 20, 1798 in Pulawy. During the November Uprising in 1831, Zamoyski was not present at the senate meeting and was subsequently removed from the senate by that year's parliament.