18K Multi-coloured (yellow, pink, green and white), hunting-case, keyless-winding, round-shaped, large, heavy and impressive, pocket watch, made for the Spanish or South American market, with subsidiary seconds at 6 and eight horological complications:
· Quarter-repeater by two hammers on two steel gongs (activated by the slide located on the case-band at 6 o’clock)
· 1/5 second chronograph (activated by the single rectangular push-piece located on the edge of the bezel at 6 o’clock), with outer ring
· Instantaneous perpetual calendar
· Retrograde (fly-back) date of the month (half-circle graduation at 12 o’clock with index)
· Day of the week (subsidiary dial at 8 o’clock; indications given in Spanish)
· Month of the year (subsidiary dial at 4 o’clock; indications given in Spanish)
· Age and phases of the moon (subsidiary dial, graduated from 0 to 29 ½, and aperture at 12 o’clock)
· Hours and minutes of a second time zone(concentric yellow gold hands, time-setting by push-pin on the right side of the pendant; the repeater mechanism is indexed to this set of hands)
White colour enamel dial, with suspended “Breguet” numerals; blued steel “Spade” hands (time-setting by push-pin on the left side of the pendant); inner ring with radial Roman numerals for the dual-time.
Five body massive “bassine et filets, carrure ronde” case, profusely chased and engraved overall with elaborate foliage; cover and case-back with four colour high-relief decoration of iris flowers cartouche, scrolls and a mask; engraved and guilloché (engine-turned) gold cuvette (dome) ; additional glazed cuvette to protect the movement. 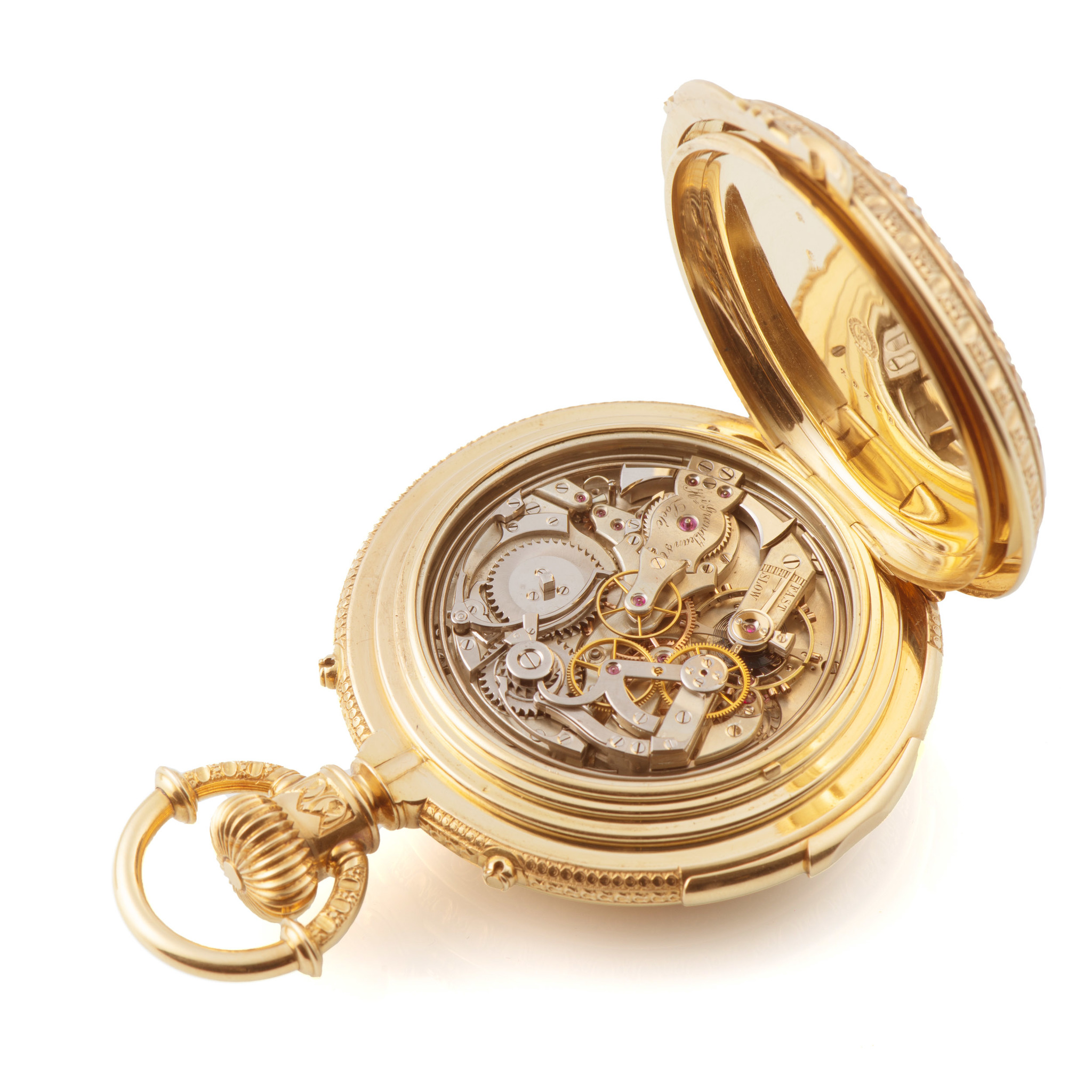 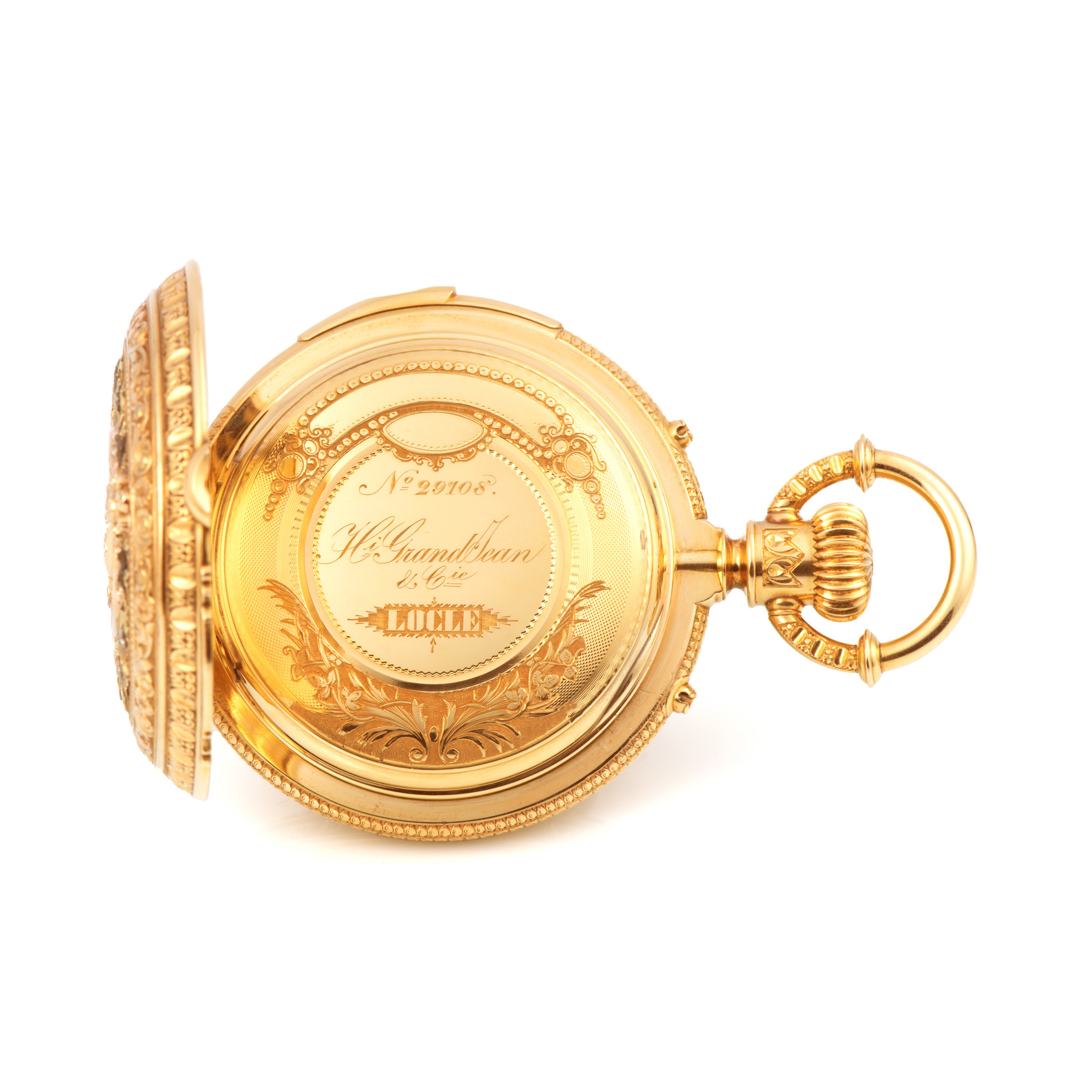 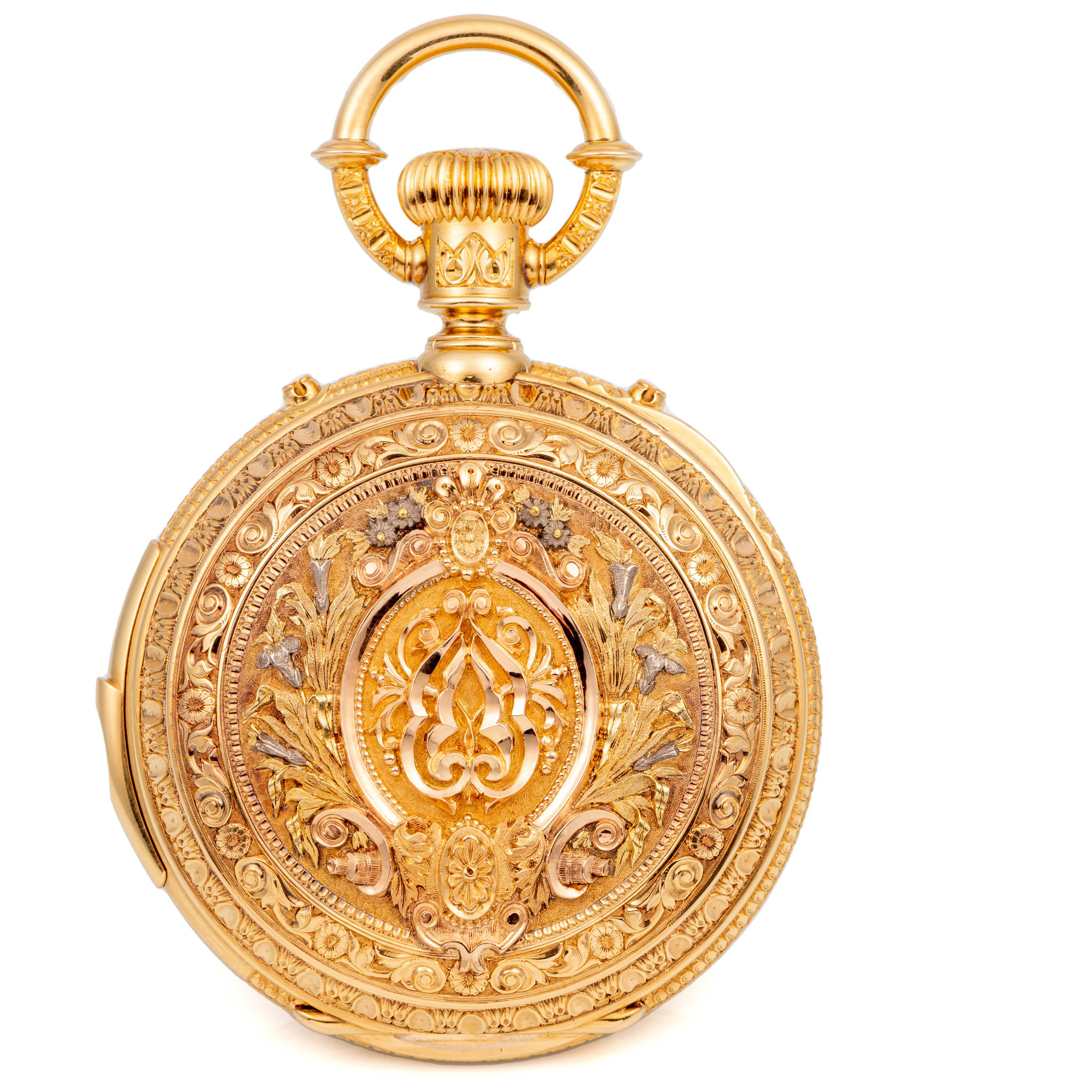 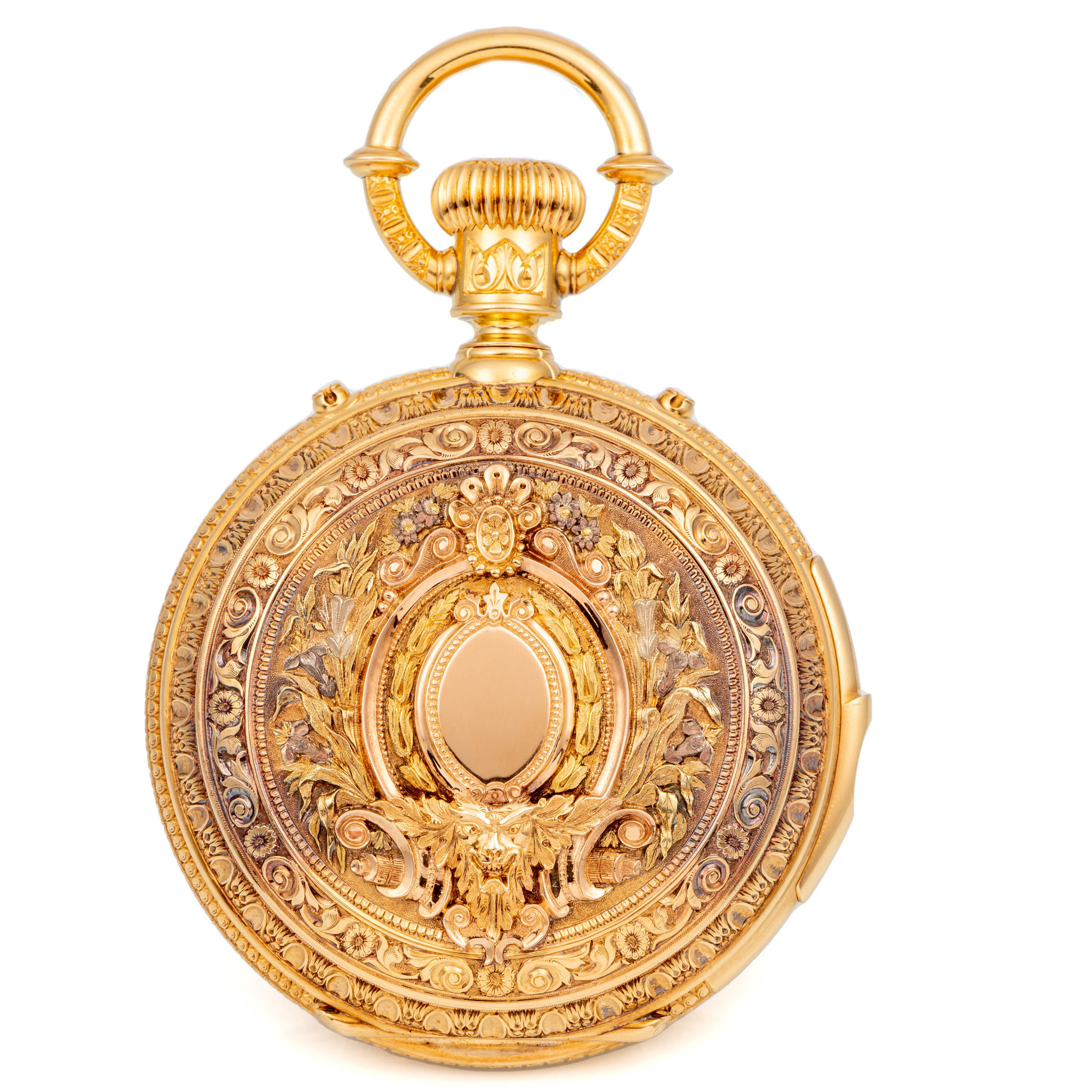 Model made for the Spanish or South American market

This watch is one of the most complicated and beautiful ever made by this watchmaker whose production was often destined for the Indian and South American markets.
The case of this watch is a master-piece of the goldsmith and case maker’s combined skills. Not only is the four-colour work of particularly high-relief and fine quality, but also the construction of the case itself, involving some 27 different parts, is a remarkable achievement.
At the time, Le Locle was probably the best-known centre in Switzerland for the making of cases with elaborate gold work and engraved decoration. Such work was usually destined for the Spanish and South American market.

Swiss chronometer maker, active in Le Locle and London.
From 1824 until 1830 he was assigned the task of organizing the South American branches of his father’s company; in 1830, his brother Henri-Gustave Grandjean emigrated to Peru and was from then on in charge of these businesses.
Henri Grandjean trained as a watchmaker in his home town. Around 1830, his factory “Henri Grandjean & Cie.” began to build marine chronometers that were modelled on the English chronometers. His business partner was at the time Edouard Thévenaz. Together with Louis-Jean Richard and Ulysse Nardin, he was the originator of the Swiss marine chronometer production.
Along with Constant Girard (1825-1903; later Girard-Perregaux), Henry Grandjean was also one of the first to enter the South American market.
In 1831, Grandjean married Elise Montandon, the daughter of Isaac-Pierre Montandon.
He was granted permission to open watchmaking schools and founded the observatory at Neuchâtel. Later, Grandjean went into politics and became representative and prefect of the city of Le Locle.
In La Chaux-de-Fonds, he worked for the establishment of the Quartier-Neuf, which was finally built in 1855; his intention was to eliminate real estate speculation and to create low priced housing for working-class families.
In 1851, at the first Universal Exposition in London, Grandjean received a First Class medal. His list of medals continues until 1868, the year in which the company won an award for its marine chronometers. In the meantime, they also received at least eight different awards, not including those from the Observatory of Neuchâtel. In 1873, the company received in Vienne, a Diploma of Honour (Gold Medal) and the Merit Medal.
Henry Grandjean died in 1879 but it appears that the company continued for the next twenty years until 1899, the year in which Rossel & Fils registered their name as successors, who were also most likely running the company during these 20 years. On January 9, 1908, Rossel & Fils transferred the title to Charles-Ferdinand Perret.
A street in Le Locle was named after him – the rue Henri Grandjean.
On the watches, the name Grandjean can be found with two possible spellings, “Grandjean” or “GrandJean”.