ILBERY, "MOSS-AGATE AND CARNELIAN DÉCOR'' Ilbery, London, No. 6129, made for the Chinese market, circa 1800. Very fine and magnificent gold, pearl, enamel, moss agate and agate-set hexagonal, case in the shaped of a urn pocket watch with center seconds and duplex escapement. 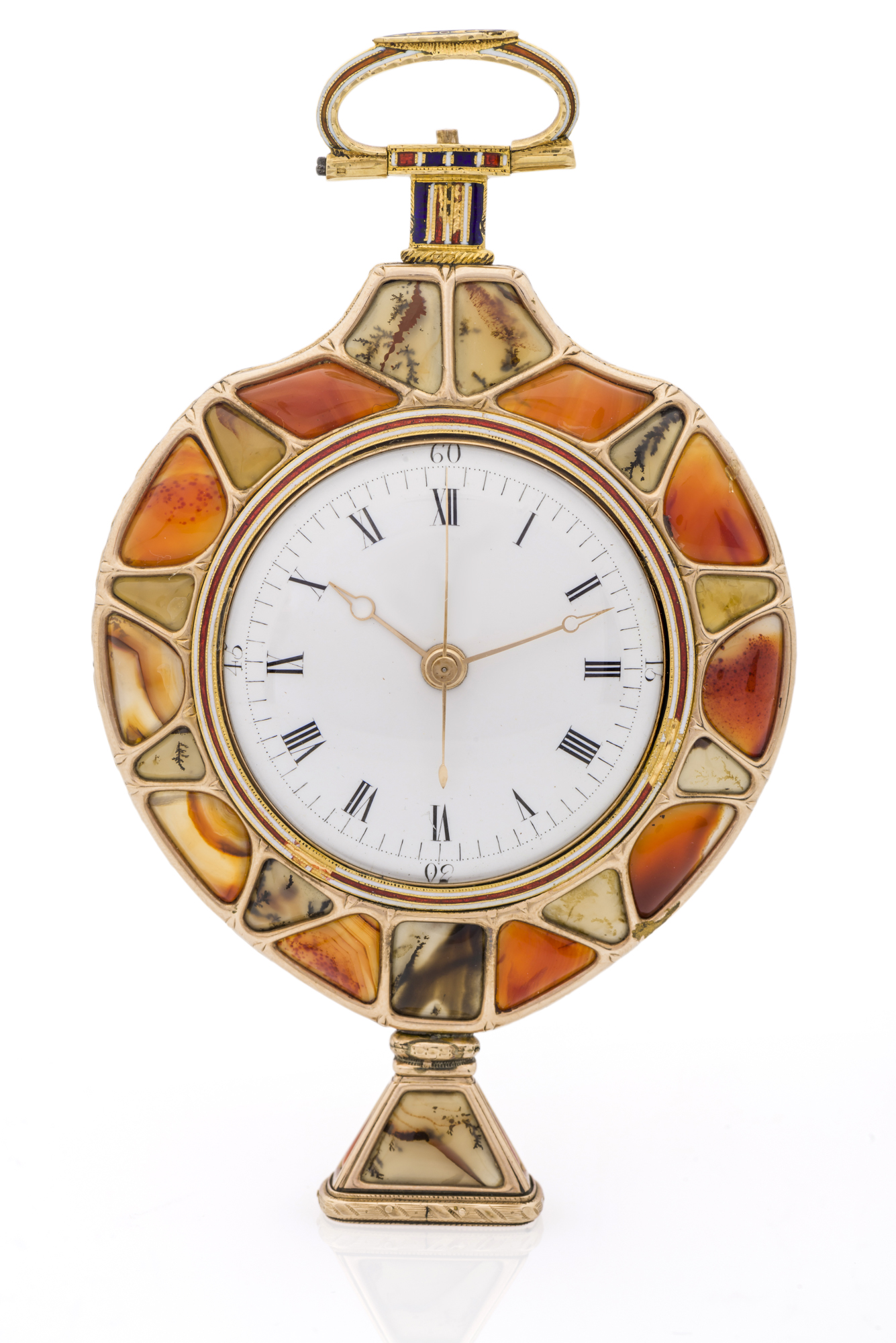 Movement signed. DIM. 102 x 67 mm.overall. Provenance Galerie Neumarkt, Zürich (Switzerland), auction, October 8, 1971. The Ilbery House from London - William Ilbery father (c.1760-1839) and William Ilbery son (c.1780-c.1851) - produced for the Chinese market a small number of watches of various shapes (elongated hexagonal, hexagonal, octagonal, round or piriform), whose decoration on the case is made with hard-stone plates, such as moss-agate and/or carnelian. Less than twelve watches of this kind are known to date; five of them are kept in Geneva at the Patek Philippe Museum (Inv. S-114, Inv. S-145 a+b, Inv. S-911 a+b). The second watch of this pair made for the Chinese market (No. 6 130) was recently auctioned in Germany (Auktionen Dr. Crott, Mannheim, Frankfurt-am-Main, May 7-8, 2011, lot 311, for the amount of € 92 720.- (€ 76 000.- hammer + buyer's premium). Moss Agate Agate, a variety of quartz, was often used by the engravers of antiquity. It was called achates, after a river in modern-day Sicily, on whose banks it was found. The name was used for stones of various colours, and to further distinguish them, the words leucachates, cerachates or hoemachates were used, depending on whether they were white, wax-coloured or red. The stones called dendrachates were those with patterns resembling herbs or trees: thus the name dentritic agate. Certain of these agates appear to contain moss: there are sometimes called moss agates or pierres de mocha in French (from the Saxon moch, meaning moss). Lastly, those stones called agates figurées in French feature unusual images. William Ilbery (c.1760-1839). Active in London from 1780 in Goswell Street, he moved to Duncan Terrace towards the end of the 18th century. Following James Cox in London and Jaquet Droz in Switzerland, he also specialised in the production of luxury watches for the Chinese Market. His early production was very much in the English style, featuring a full plate movement and an English type single wheel duplex escapement. However, for his highest quality watches, he incorporated a spring detent escapement. Later, the watch movements he produced were much inspired by the Lépine calibre with free-standing barrel, as were Jaquet Droz's Swiss production signed in London and that of William Anthony, who worked in London. The cases of his watches were sumptuously decorated by the best Genevan enamelers, such as Jean-Francois-Victor Dupont (1785-1863), who usually signed his work, and Jean-Louis Richter (1766-1841), who signed rarely. He organized the production in Switzerland, mainly in Fleurier (Val de Travers), of profusely engraved movements for the Asian market. He was followed in this by makers such as Bovet and Juvet who also worked in Fleurier. Ilbery can therefore be considered one of the most representative makers of ''Chinese'' watches. He seems to have maintained close contacts with the continental trade since a watch signed ''Ilbery Paris'' is known and Ilbery & Son are recorded in London and Fleurier, as well as in Canton.