18K yellow gold and enamel, open-face, key-winding, round-shaped, pocket watch with special solid gold movement and centre-seconds, made for the Chinese market. “Consular” case with scallop edges; champlevé enamel case-back with, in the centre, a scene showing children playing with hoop, after an English engraving; the painting on enamel on gold attributable to Jean-Louis Richter (1766-1841), Geneva. 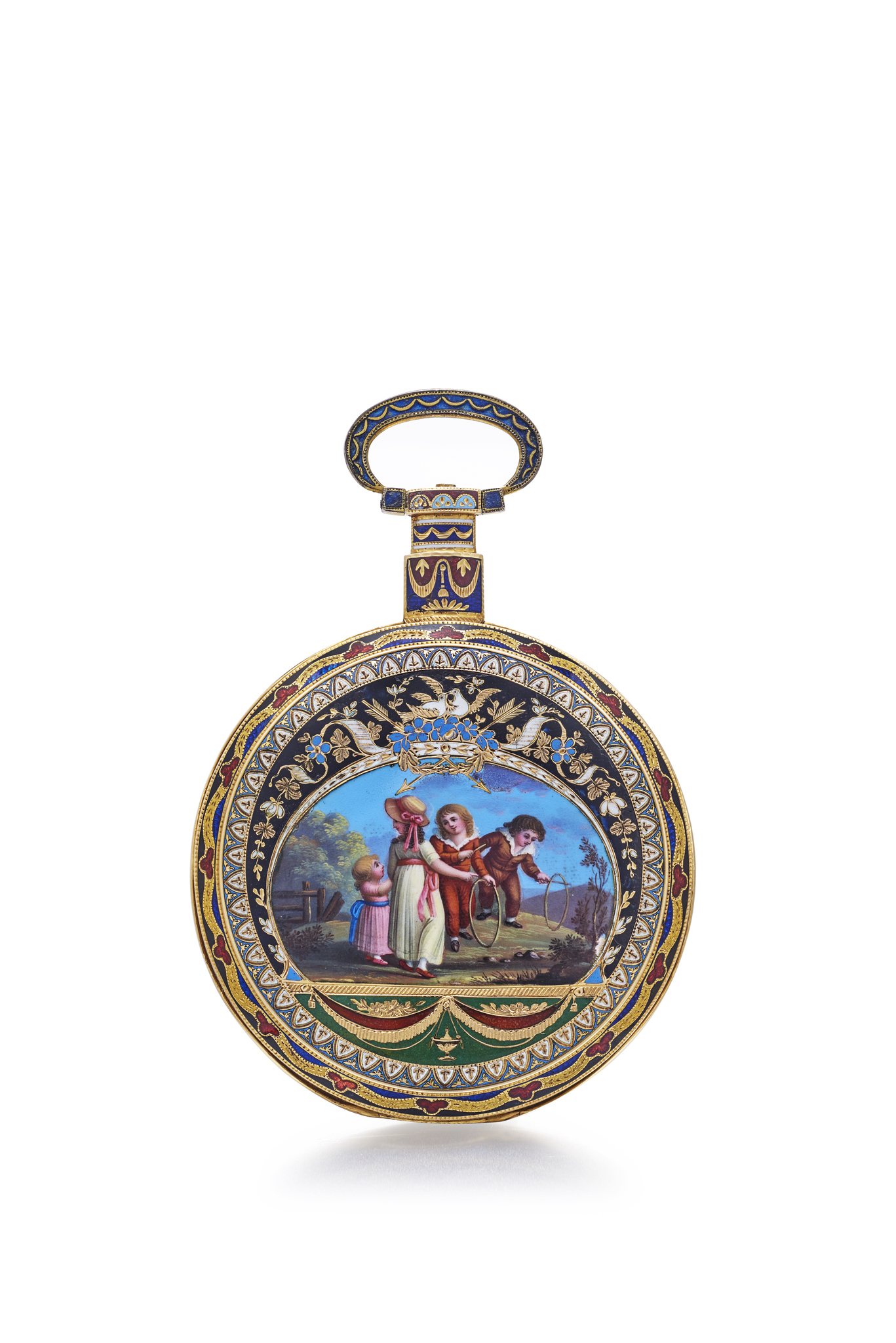 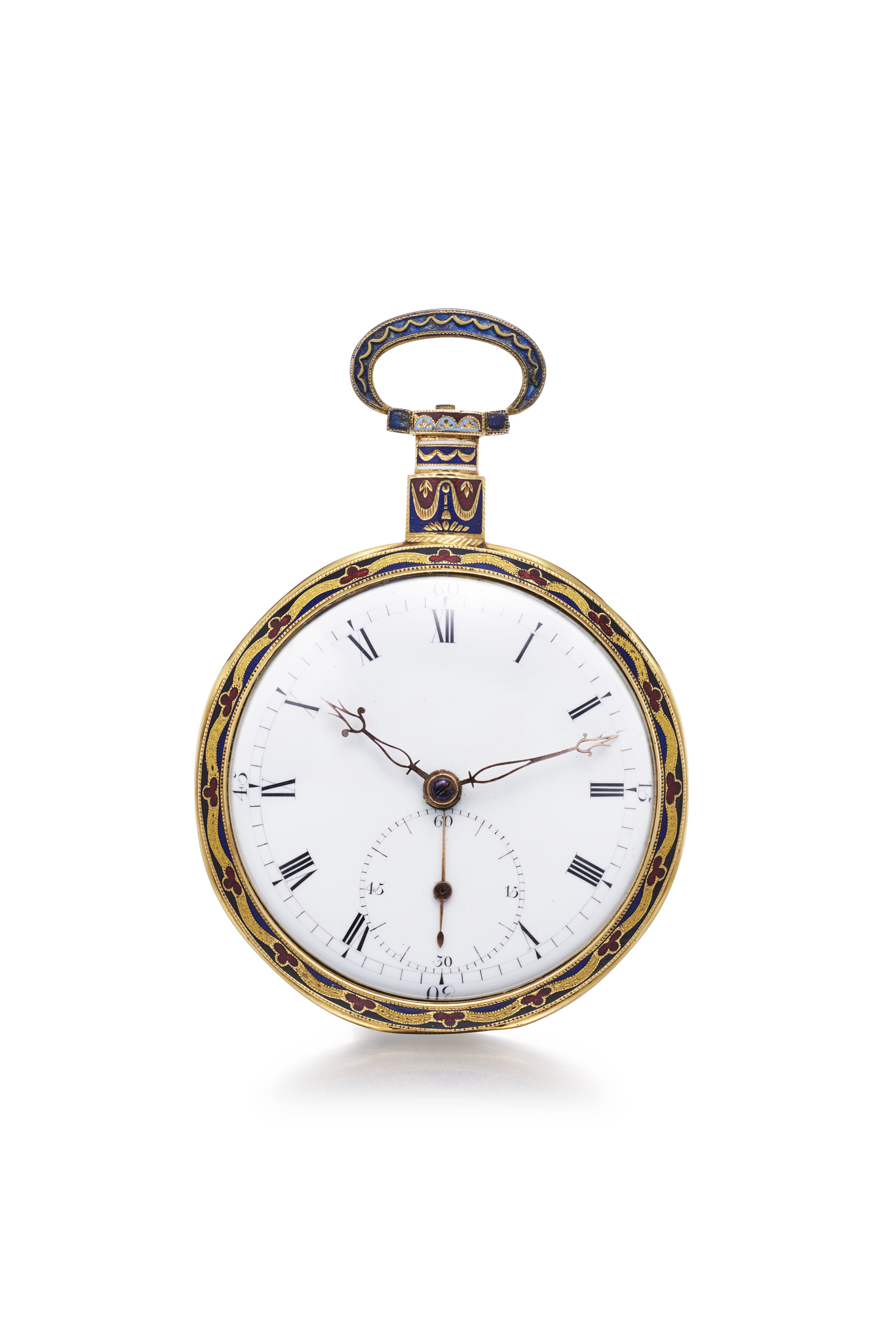 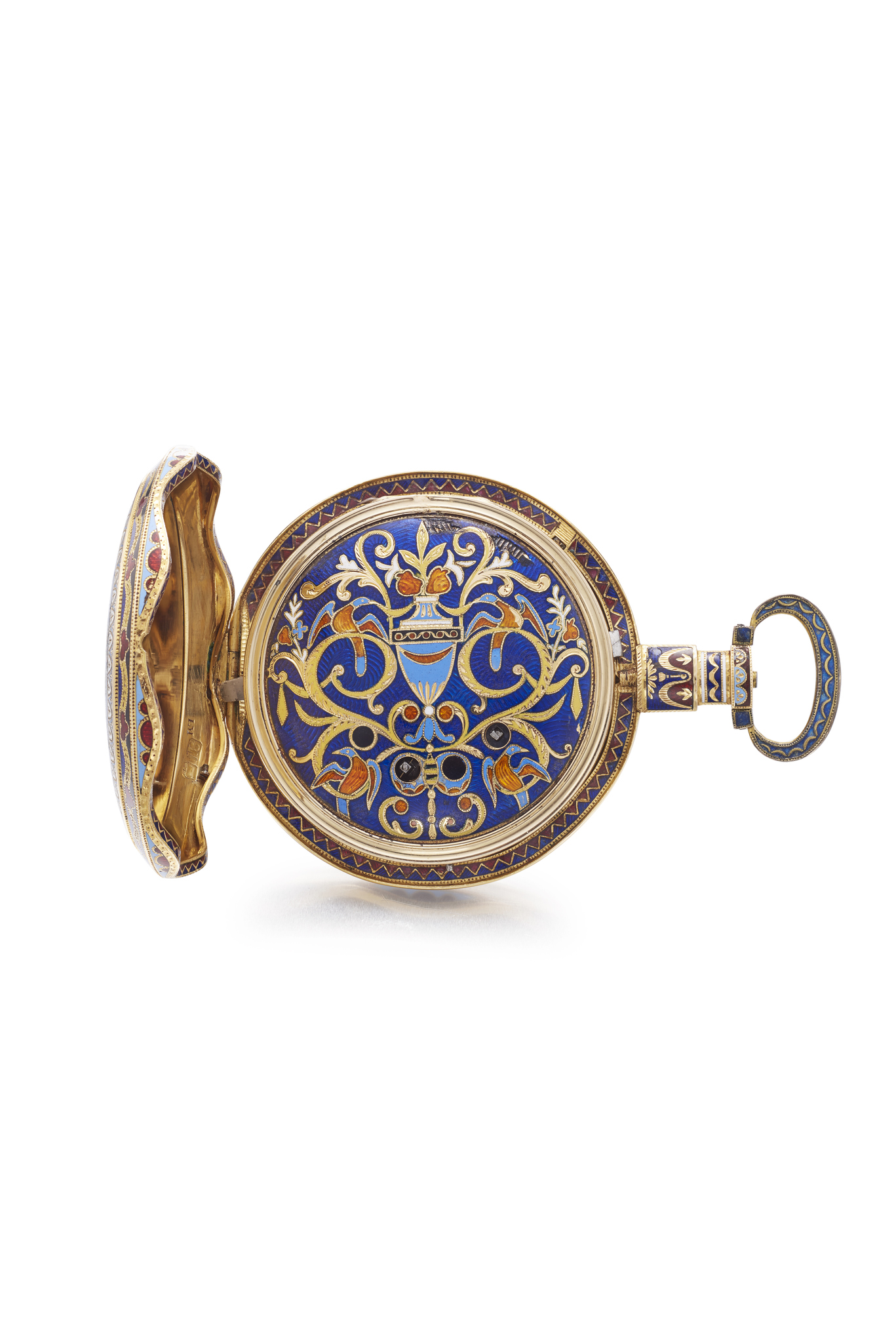 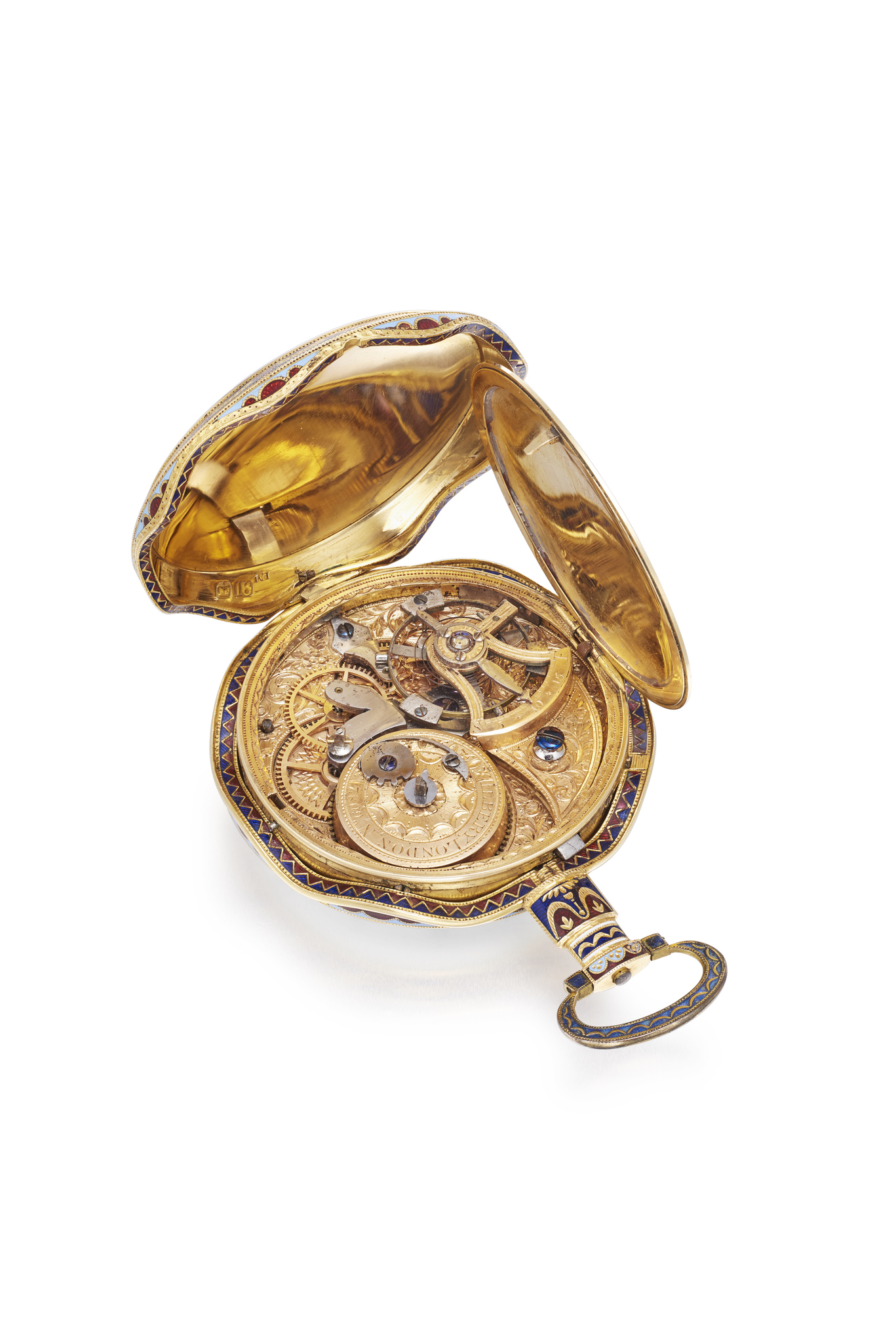 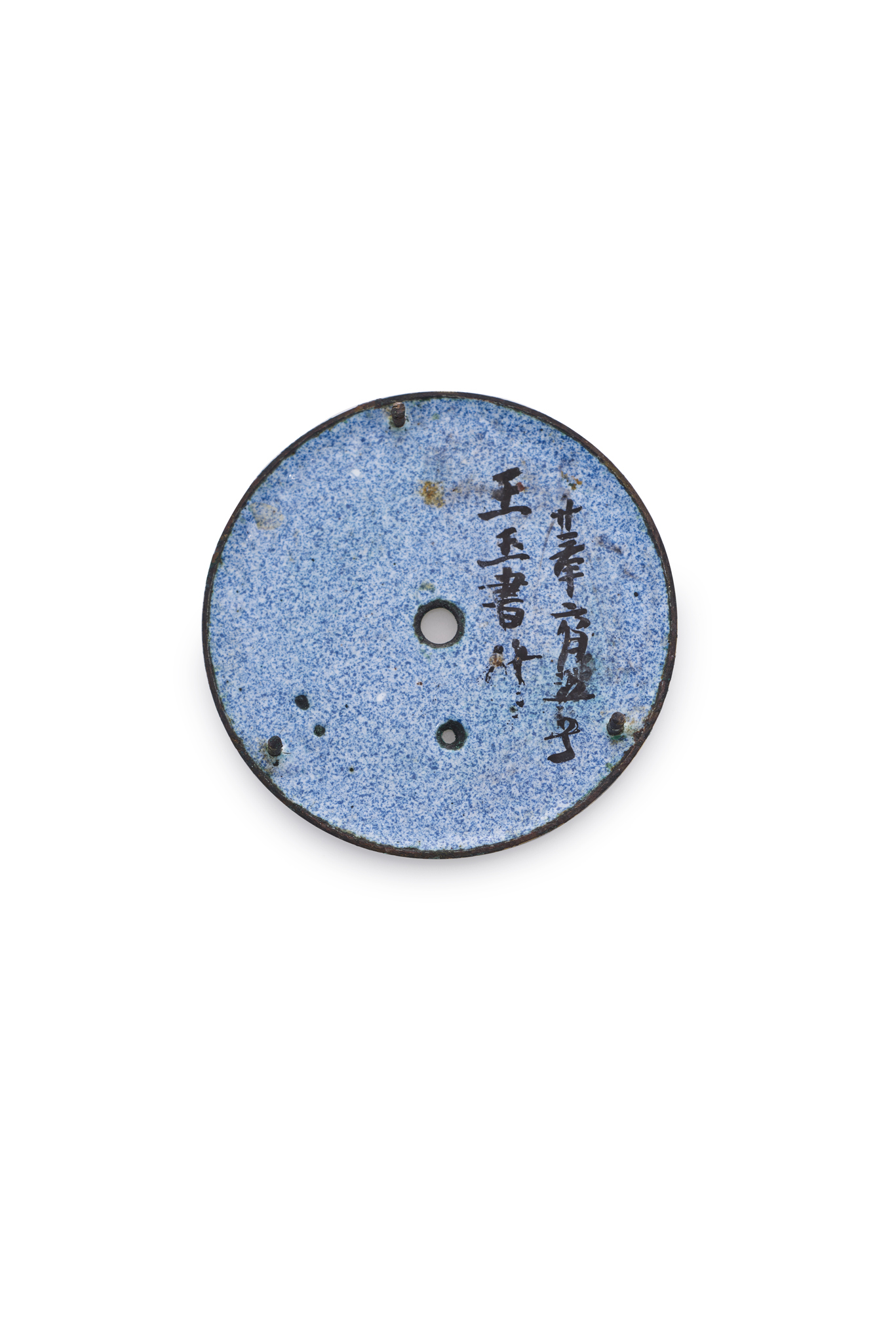 Ilbery’s “solid red gold” movements Only very few Ilberys watches with “solid red gold” movements are known to-date. This is the third movement known duly signed by Ilbery, London. All cased with painting on enamel attributable to Jean-Louis Richter. • Ilbery, London, unnumbered (the enamel showing characters). Chapuis, Alfred (with coll. of Loup, Gustave), La montre chinoise. Relations de l’Horlogerie suisse avec la Chine, Neuchâtel, Editions Attinger Frères, 1919, pl. following p. 182 (ill. movement only; former Gustave Loup collection). • Ilbery, London, No. 6 083 (the enamel showing a maritime landscape after Claude- Joseph Vernet, 1714-1789) Patek Philippe Museum, Geneva, Inv. S-113. • Unsigned and unnumbered (the enamel showing an officer “home from the war”). Antiquorum, Hong Kong, auction, June 17, 1994, lot 377, sold for the amount of HK$ 510 600.- • Unsigned and unnumbered (the enamel showing two riding gentlemen with a tree and further split-pearl inlaid ornaments on the foreground). Antiquorum, Geneva, auction, October 12, 1996, lot 628, sold for the amount of CHF 47 150.- • Unsigned, No. 1 140 (can be done by another workshop); the movement with engraved “solid gold” main-plate and blued steel bridges (the enamel showing a lady and her two daughters sitting behind a house). Antiquorum, Geneva, auction, April 24-25, 2004, lot 264, sold for the amount of CHF 69 000.- Patek Philippe Museum, Geneva, Inv. S-650; see: Tellier, Arnaud, & Didier, Mélanie, Le Miroir de la séduction, Prestigieuses paires de montres « chinoises » ?? The Mirror of Seduction, Prestigious pairs of “Chinese” Watches, Geneva, Patek Philippe Museum Editions, 2010, pp. 152, ill. 2. William Ilbery (c.1760-1839). Active in London from 1780 in Goswell Street, he moved to Duncan Terrace towards the end of the 18th century. Following James Cox in London and Jaquet Droz in Switzerland, he also specialised in the production of luxury watches for the Chinese Market. His early production was very much in the English style, featuring a full plate movement and an English type single wheel duplex escapement. However, for his highest quality watches, he incorporated a spring detent escapement. Later, the watch movements he produced were much inspired by the Lépine calibre with free-standing barrel, as were Jaquet Droz’s Swiss production signed in London and that of William Anthony, who worked in London. The cases of his watches were sumptuously decorated by the best Genevan enamellers, such as Jean-Francois-Victor Dupont (1785-1863), who usually signed his work, and Jean- Louis Richter (1766-1841), who signed rarely. He organized the production in Switzerland, mainly in Fleurier (Val-de-Travers), of profusely engraved movements for the Asian market. He was followed in this by makers such as Bovet and Juvet who also worked in Fleurier. Ilbery can therefore be considered one of the most representative makers of ‘‘Chinese’’ watches. He seems to have maintained close contacts with the continental trade since a watch signed ‘‘Ilbery Paris’’ is known and Ilbery & Son are recorded in London and Fleurier, as well as in Canton. His son, William Ilbery (c.1780-c.1851), works with him. Children playing with a hoop The charming painted enamel scene decorating the present watch derives from English genre paintings by artists from the Royal Academy, such as Joshua Reynolds (1723- 1792), Francis Wheatley (1747-1801), William Hamilton (1751-1801), William Redmore Bigg (1755-1828), etc., who specialised in images of romanticised English rural life in the last quarter of the 18th century. Their paintings were engraved by Francesco Bartolozzi (1727-1815), Thomas Burke (1749-1815), John Raphael Smith (1752-1812), Peltro William Tomkins (1760-1840), Henry Gillbank (fl. late-18th-early 19th c.), etc., and sold as prints which were published by John Boydell (1719-1804) and Josiah Boydell (1752-1817), engravers and print-sellers, James Daniell (fl.1771-1814) and others. These genre prints were enormously popular and were used as models for Genevan enamellers, including Jean-Louis Richter (1766-1841). Ilbery’s “Consular”-type cases with scalloped edges The case of our watch is made in the same spirit as that of the watch signed Ilbery, London, No. 5 995, whose movement (gilded brass, full plate, with fusee and chain) is fitted with a spring detent Peto cross escapement. The enamel painting, also attributable to Jean-Louis Richter, represents a scene with children “Feeding the Chicks”. This case is also of “Consular”-type with scalloped edges (see: Antiquorum, auction, April 13, 2002, lot 61, sold for the amount of CHF 245 500.-). Ilbery seems to have used this type of case only for its more luxurious watches; those with “chronometer” movements or “solid red gold” movements. Richter, Jean-Louis (1766-1841), Geneva Learned his art under David-Etienne Roux and Philippe-Samuel-Théodore Roux, becoming a most renowned enamel painter. His speciality was the painting of landscapes and particularly lake-side scenes and marine-scapes, often representing ships in a harbour or battles with fighting Men-of-War, but, on occasion, also portraits and hunting scenes. He did not often sign his work, but it is clearly recognised as being in his hand from the style and quality of the painting. He applied his art principally to watch cases and snuff-boxes and these were largely destined for the Chinese, Turkish, British and Italian markets. In 1828, he was in partnership with Aimé-Julien Troll (1781-1852) and one can find work signed Richter et Troll. Richter, like other great enamel painters of the time, often found inspiration for his work from paintings or engravings by the artists then in fashion particularly Claude Verne or the romanticised English and Irish rural life. The inscription in Chinese characters, on the counter-enamel of the dial, mentions “23 Year / June 5th / Wong”, suggesting that on July 5 of the 23rd year of the reign of the emperor, the watch was repaired by a called Wong. The inscription could be written under the reign of three different emperors: Jiaqing, Daoguang or Guangxu.