18K yellow gold, pearl-set and enamel, open-face, key-winding, round- shaped, large pocket watch with centre-seconds, made for the Chinese market. Royal blue flinqué enamel (translucent enamel over guilloché engine- turning) case-back, with a large bunch of summer flowers; the painting on enamel on gold attributable to a Genevan painter on enamel. 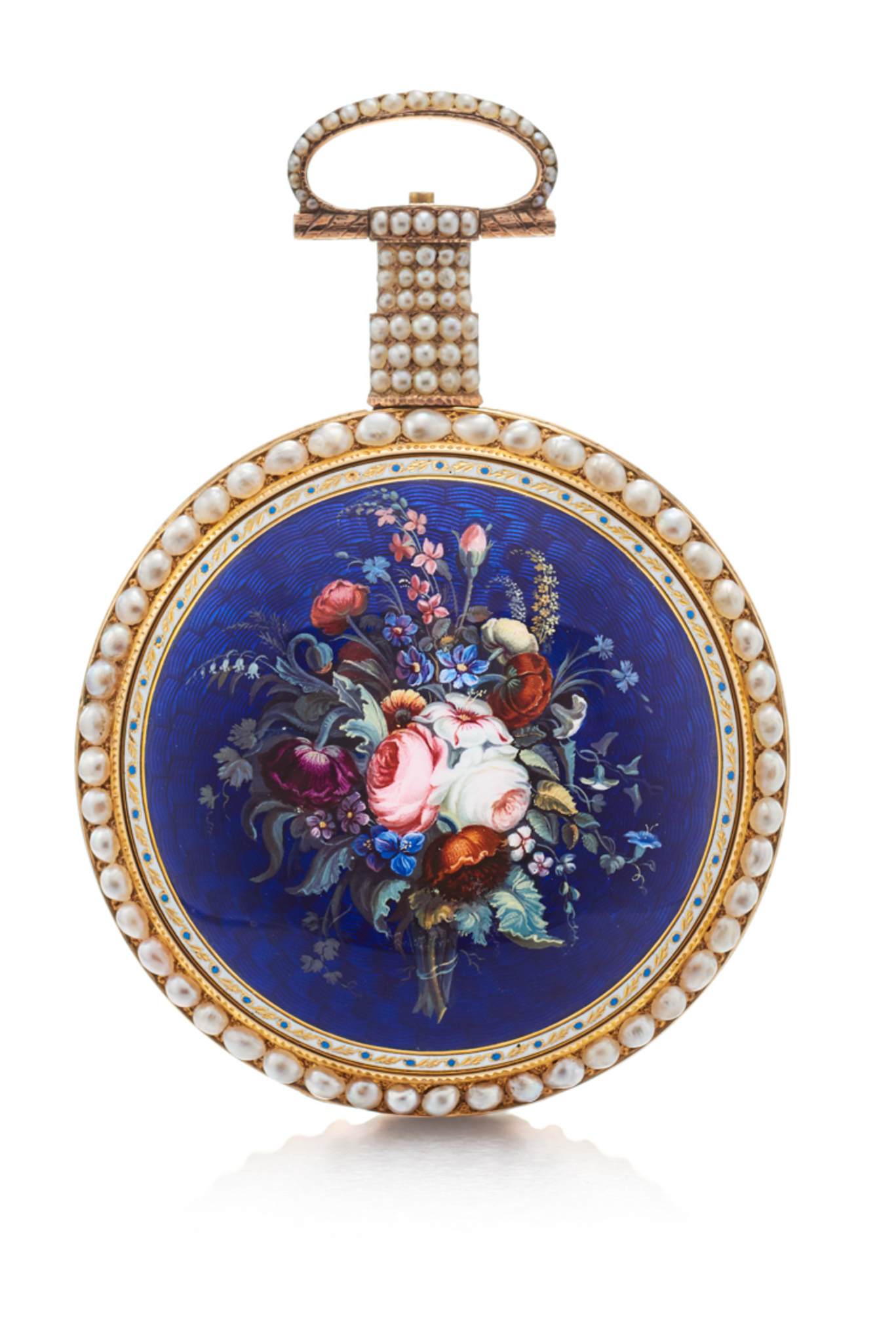 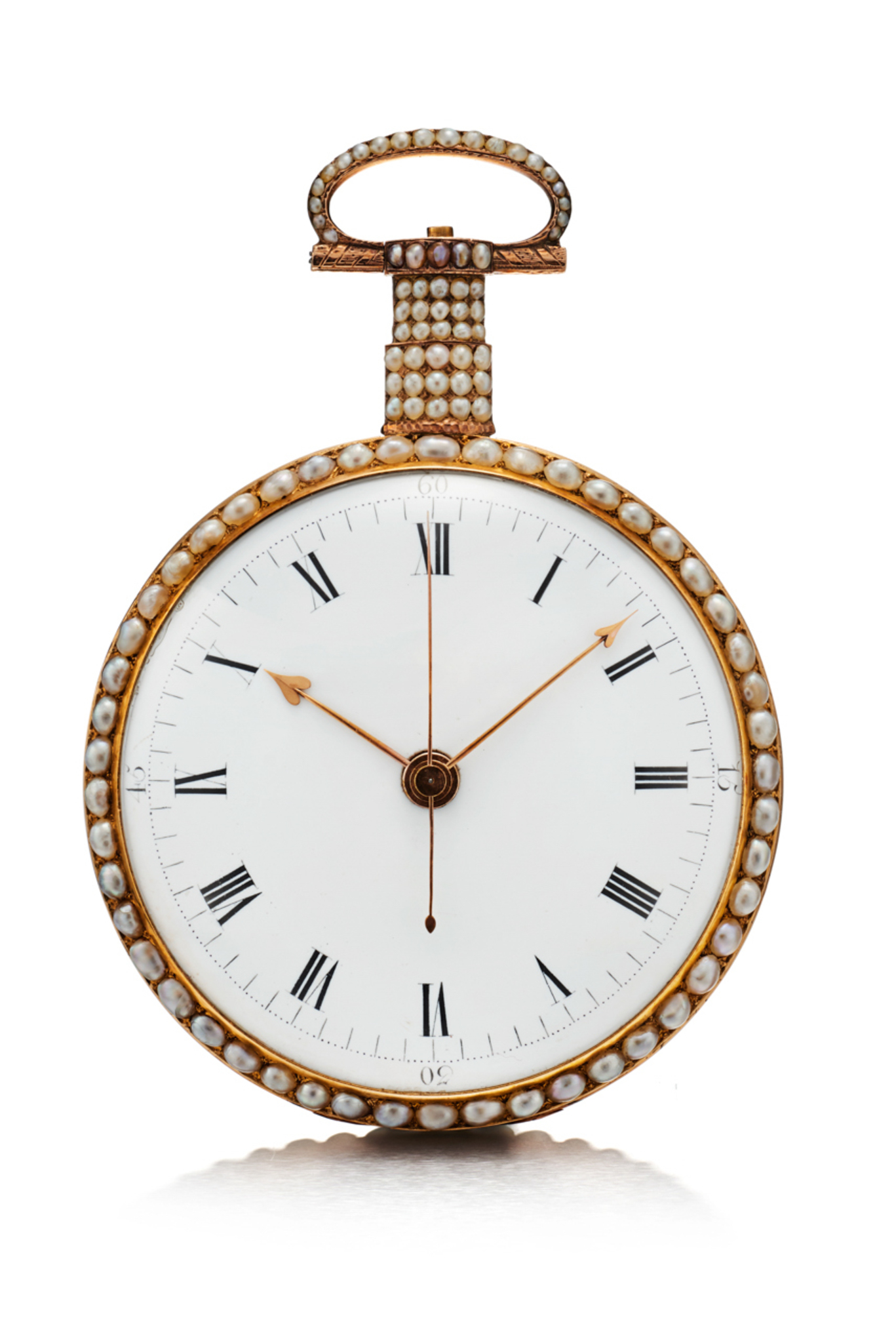 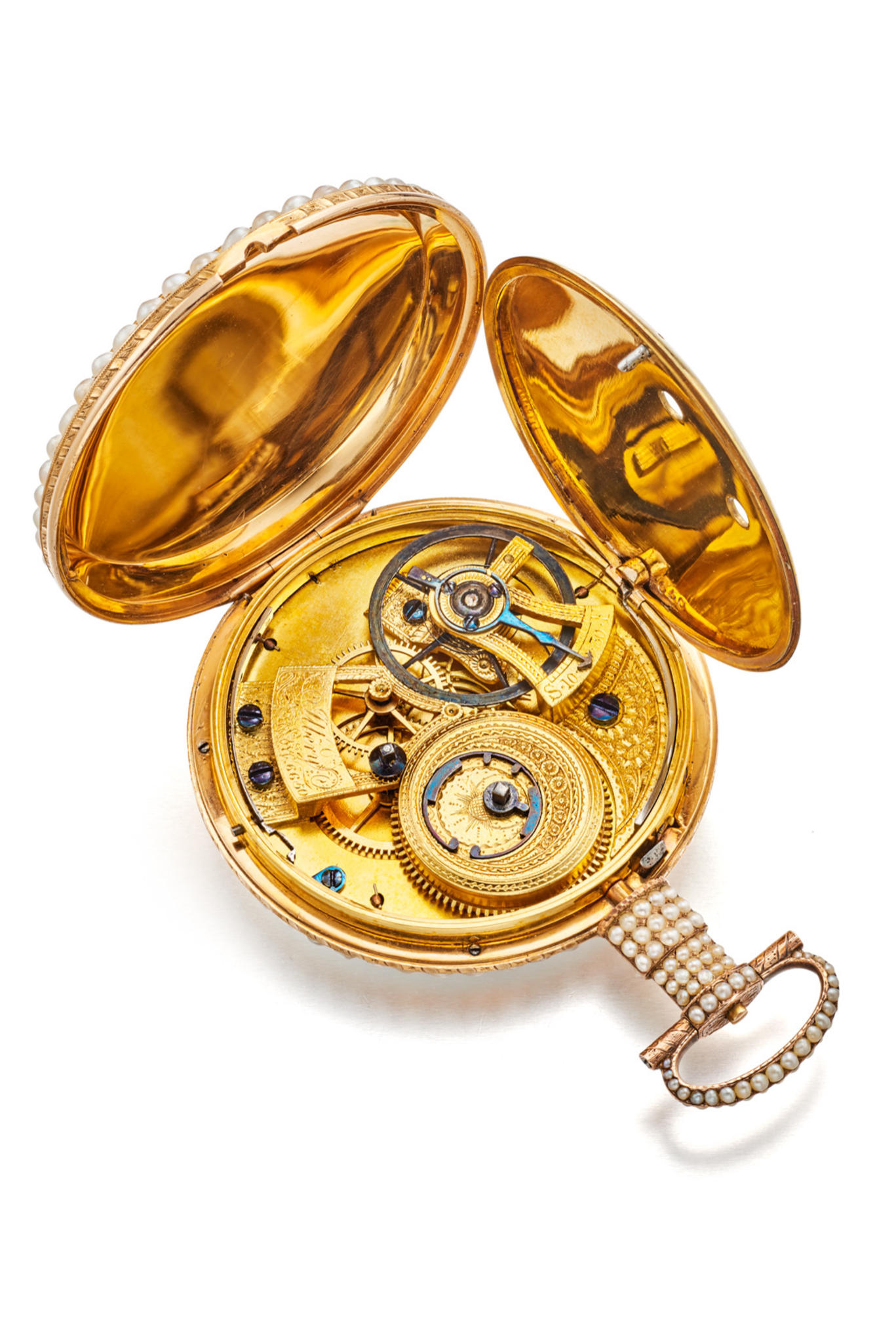 Brand Ilbery, London (made probably in Fleurier, V al-de-Travers, and in Geneva)

Provenance
• Marouf, Dusseldorf (Germany), auction No. 2, October 3, 1970, lot 29 (illustrated on the back-cover).
The Chinese and the Flowers
Flowers have great symbolic importance for the Chinese. By their form, aspect, and fragrance, they are considered to be highly spiritual, reflecting the profound nature of the Chinese people. Poems and proverbs show the cultural importance of flowers: “There is no flower without beauty in the world”, “A flower gives us a glimpse of paradise”, etc.
Certain flowers have a particular significance. The lotus symbolizes purity, the chrysanthemum perseverance, the plum blossom integrity, etc. The peony, with its generous forms, brilliant colours, and heady fragrance, became the most important flower for the Chinese. It is considered to symbolize wealth, nobility, power, and happiness. Known as the “queen of flowers”, the peony symbolizes wealth and distinction.
Paintings of flowers are often hung in Chinese homes for good
luck and in offices to bring success in business. The deep and
rich symbolism the Chinese attached to flowers made them an ideal subject for expensive watches and those destined for exalted patrons, even for the Emperor himself. The symbolism of each flower would have been immediately recognized and appreciated by China’s elite, who would have seen in them a flattering reference to their own wealth and power.
Ilbery, William (?-1839)
Active in London from 1780. Following James Cox in London
and Jaquet Droz in the Neuchâtel mountains and Geneva, he specialized in luxury watches made for the Chinese market. His early production was in the English style, with a full plate movement and an English type single wheel duplex escapement; however,
for his highest quality watches he incorporated a spring detent escapement (Peto-type). The cases were in the style of those made in England at the time. Later, his watch movements were much inspired by the Lépine calibre with freestanding barrel, as were those of Jaquet Droz’s Swiss production signed in London and that of William Anthony, who worked in London. He set a new standard for watches made for the Eastern market. He had profusely engraved movements made in Switzerland, mainly in Fleurier, being followed in this by makers such as Bovet and Juvet. These watchmakers organized the mass production of silver-cased watches and later, once their Canton manufactures were opened, assembled them in China. Ilbery can therefore be considered the “father” of “Chinese” watches as they are known today. Ilbery’s watch cases were decorated by Geneva’s best enamellers, such as Jean-Francois-Victor Dupont and Jean-Louis Richter. He seems to have maintained close contacts with the continental trade, since a watch signed “Ilbery Paris” is known and “Ilbery & Son” are recorded in London and Fleurier, as well as in Canton.