Ilbery
Pocket watch made for the Chinese market; 18K yellow gold and enamel; the enamel attributable to Jean-Louis Richter

--
“Chryseis restored to her Father”

“Consular” case with polychrome enamel painting showing “Chryseis restored to her Father”, after the work of Giovanni Battista Cipriani (1727-1785) and the engraving (1786) of Francesco Bartolozzi (1728-1815), the painting on enamel on gold attributable to Jean-Louis Richter (1766-1841), Geneva. 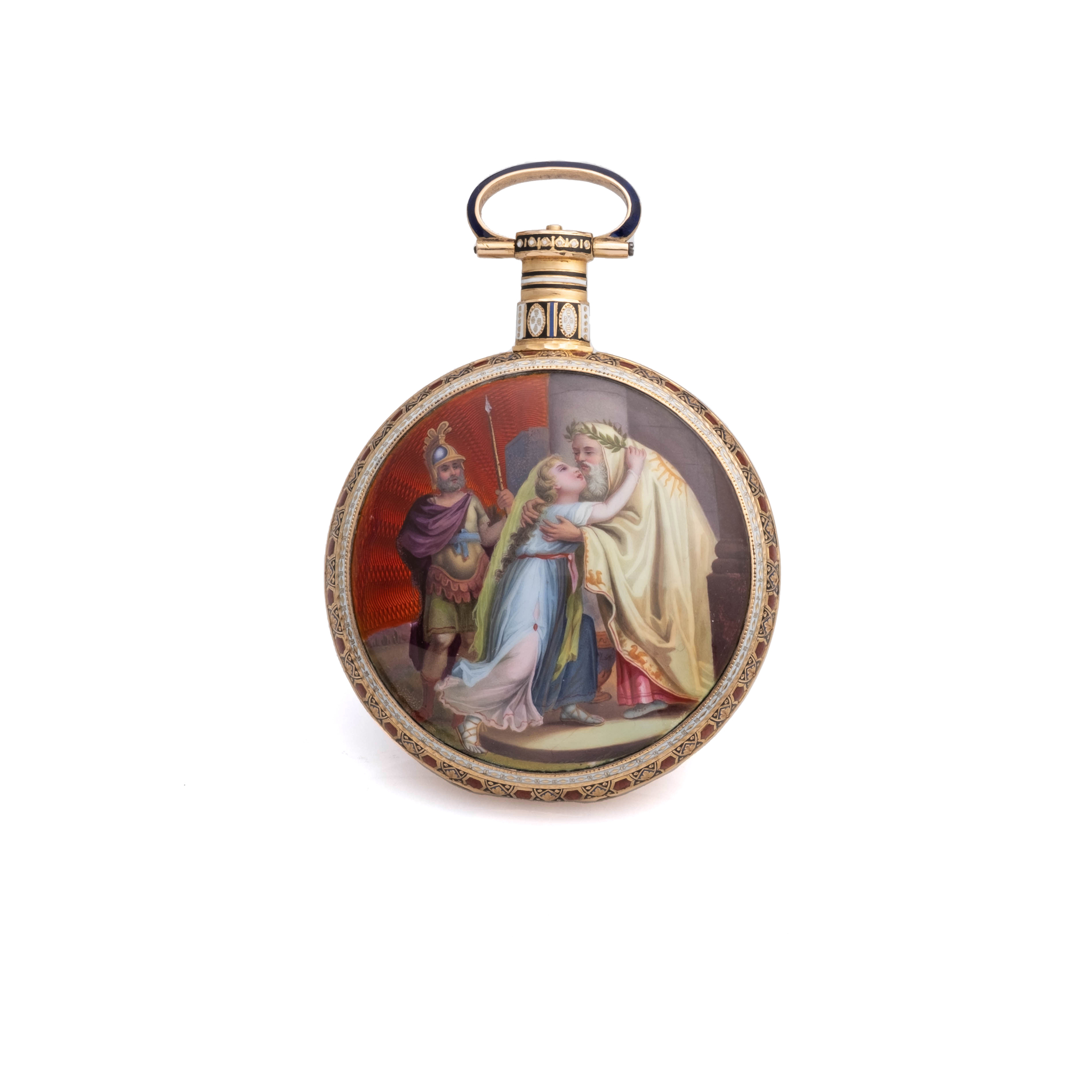 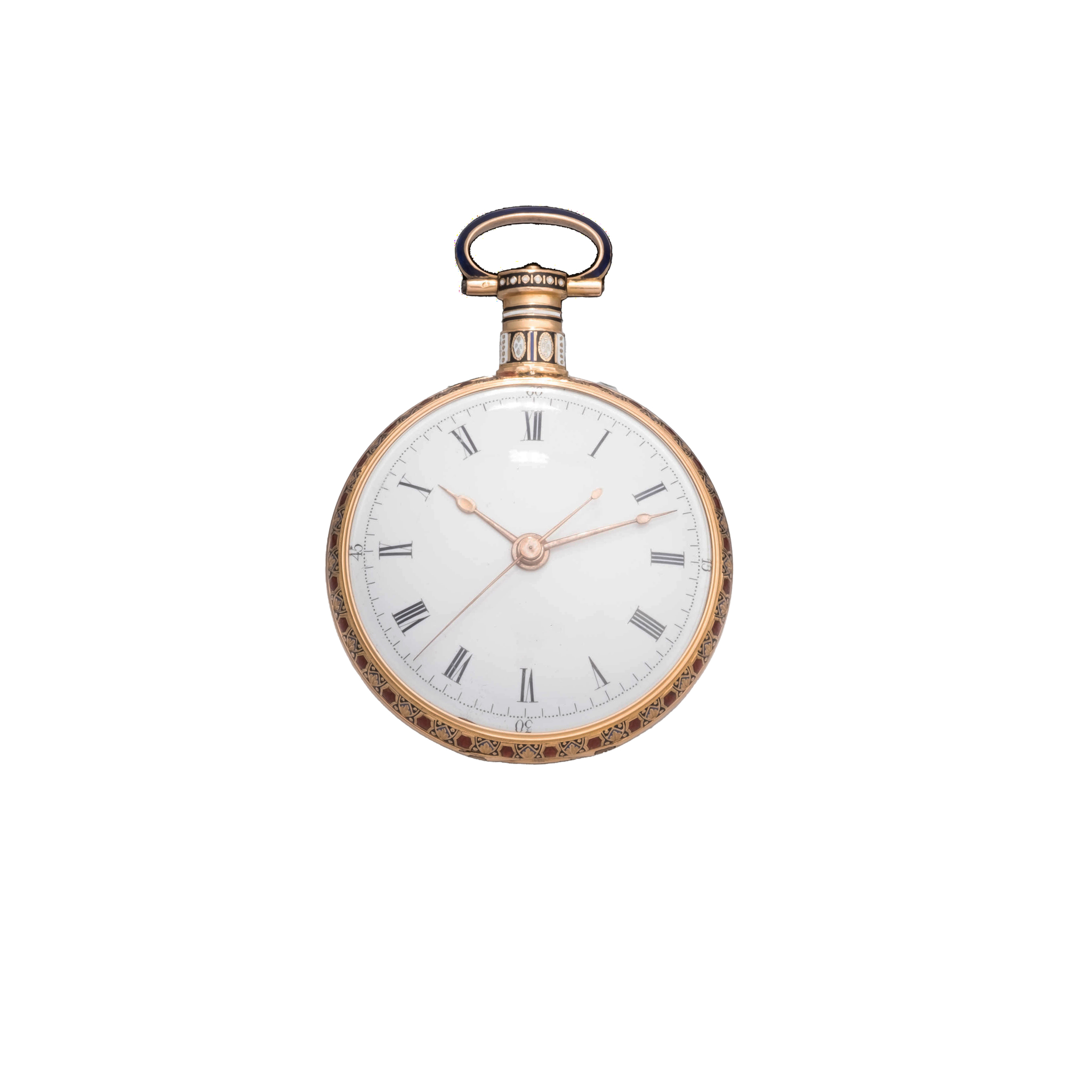 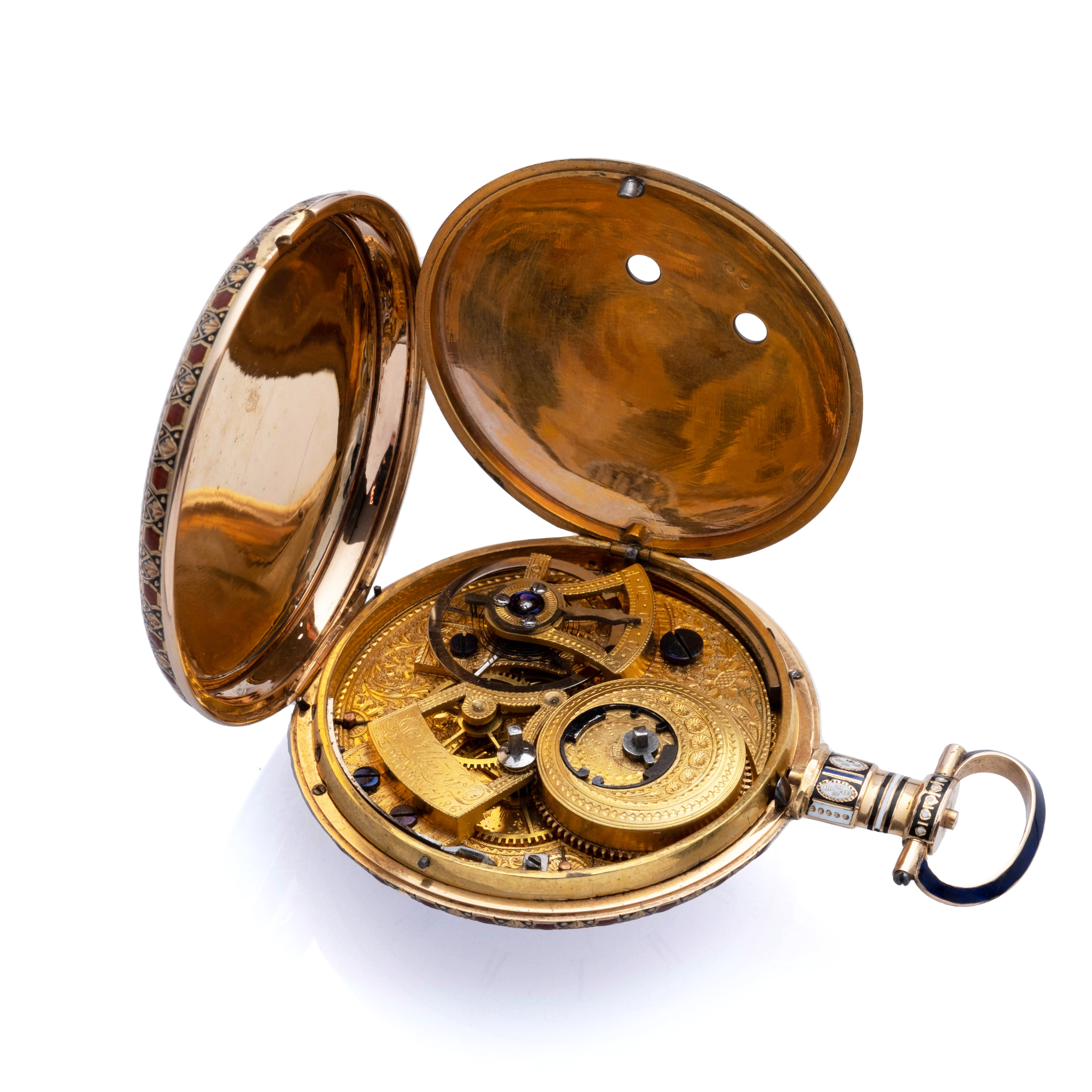 Model made in Fleurier (Val-de-Travers) and Geneva

Active in London from 1780 in Goswell Street, he moved to Duncan Terrace towards the end of the 18th century. Following James Cox in London and Jaquet Droz in Switzerland, he also specialised in the production of luxury watches for the Chinese Market. His early production was very much in the English style, featuring a full plate movement and an English type single wheel duplex escapement. However, for his highest quality watches, he incorporated a spring detent escapement. Later, the watch movements he produced were much inspired by the Lépine calibre with free-standing barrel, as were Jaquet Droz’s Swiss production signed in London and that of William Anthony, who worked in London.

The cases of his watches were sumptuously decorated by the best Genevan enamelers, such as Jean-Francois-Victor Dupont (1785-1863), who usually signed his work, and Jean-Louis Richter (1766-1841), who signed rarely. He organised the production in Switzerland, mainly in Fleurier (Val-de-Travers), of profusely engraved movements for the Asian market. He was followed in this by makers such as Bovet and Juvet who also worked in Fleurier. Ilbery can therefore be considered one of the most representative makers of ‘‘Chinese’’ watches. He seems to have maintained close contacts with the continental trade since a watch signed ‘‘Ilbery Paris’’ is known and Ilbery & Son are recorded in London and Fleurier, as well as in Canton. His son, William Ilbery (c.1780-c.1851), works with him.

Learned his art in Geneva under David-Etienne Roux and Philippe-Samuel-Théodore Roux, becoming a most renowned enamel painter. His speciality was the painting of landscapes and particularly lake-side scenes and marine-scapes, often representing ships in a harbour or battles with fighting Men-of-War, but, on occasion, also portraits and hunting scenes. He did not often sign his work, but it is clearly recognised as being in his hand from the style and quality of the painting. He applied his art principally to watch cases and snuff-boxes and these were largely destined for the Chinese, Turkish, British and Italian markets. In 1828, he was in partnership with Aimé-Julien Troll (1781-1852) and one can find work signed Richter et Troll. Richter, like other great enamel painters of the time, often found inspiration for his work from paintings or engravings by the artists then in fashion particularly Claude Verne or the romanticised English and Irish rural life.