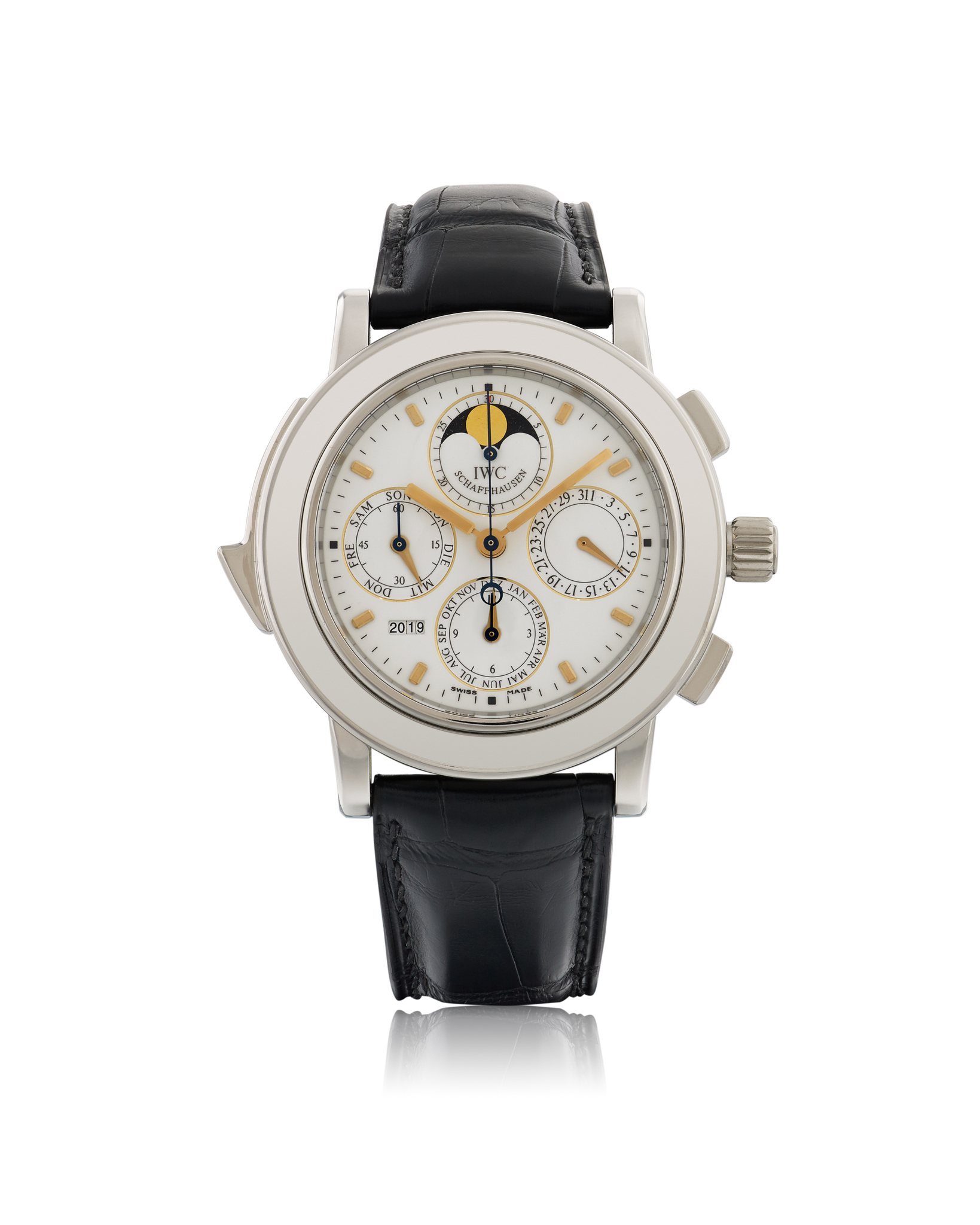 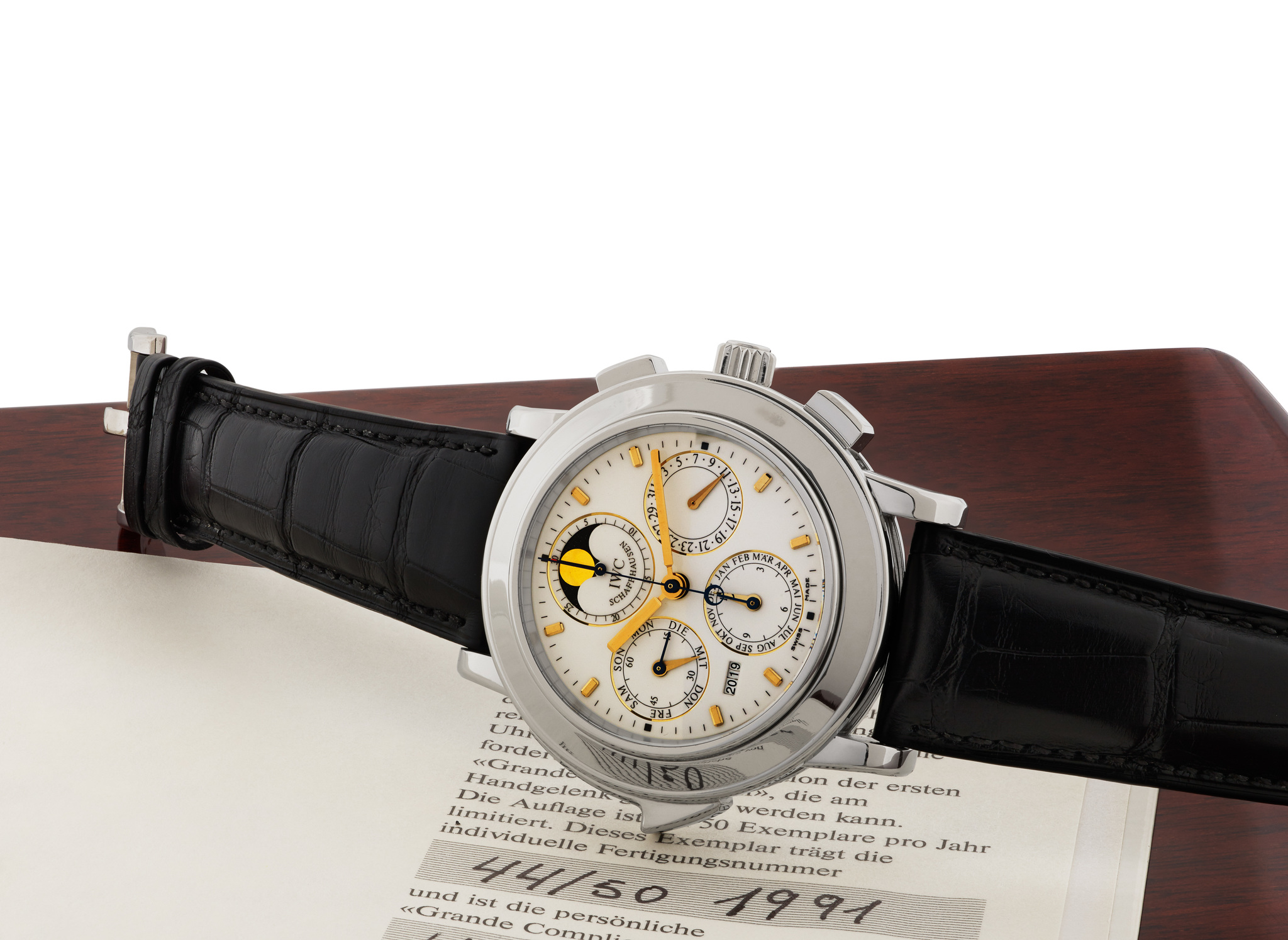 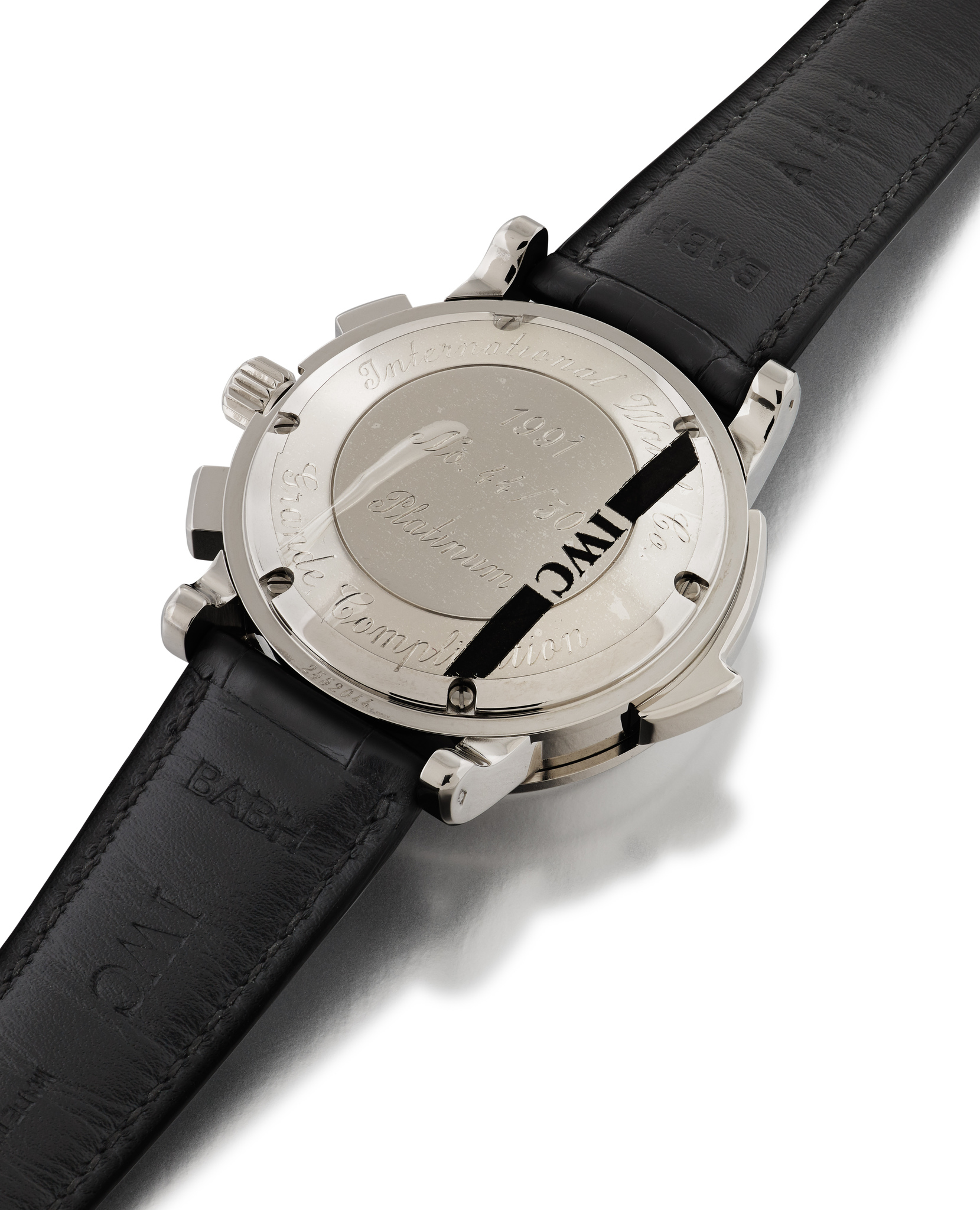 The certificate mentioned that this watch was sold on July 17, 1992.

--
IWC, Ref. 3770
After seven years and over 50 000 hours in the making, the IWC “Grande Complication” model was completed and presented in the spring of 1990. Kurt Klaus, the head watchmaker and technical designer of the brand strived to create the first wristwatch-sized “Grand Complication” with unprecedented number of complications. With over 659 individual parts, the watch houses an impressive number of complications: perpetual calendar calibrated for 500 years, precise moon-phase indicator, chronograph up to twelve hours, and a crystal-clear chiming minute-repeater. Nevertheless, Klaus wanted to keep the watch more “user-friendly” by choosing an automatic winding method fit for daily use.

International Watch Co., Schaffhausen
In the 1870’s, American-born Florentine Ariosto Jones, who had been appointed director of the E. Howard & Co. watchmaking factory in Boston at the early age of 27, decided to manufacture high-quality movements and watch parts for the American market using American technology and skilled labour from Switzerland, where wages were comparatively low. However, the skilled workers in the Geneva region and in the remote valleys of the Jura mountains resisted the plans of a man they considered an intruder and it was not until Jones teamed up with Johann Heinrich Moser from Schaffhausen that his plan could be realized. Moser had built a hydrostation in Schaffhausen, powered by water from the Rhine, which generated low-cost energy. In 1868, Jones settled on the banks of the Rhine, creating the International Watch Company. Schaffhausen had long been a watchmaking town, with a clockmaker’s guild existing there since 1583. The town was also home to the famous Habrecht family of clockmakers, who built the impressive astronomical clock for the Strasburg cathedral. However, Jones’ arrival marked a new era in time measurement, for he was not only an entrepreneur but a talented watchmaker. The first pocket watches produced in Schaffhausen with the Jones calibre had a wealth of advanced technical features. A year after its foundation, the “American” watch factory passed into Swiss hands, but its philosophy – “Probus Scafusia” good, solid craftsmanship from Schaffhausen – has remained unchanged. By the late 1930’s, IWC’s reputation was so good that its watches were considered “the poor man’s Patek Philippe”. In recent years, IWC enlarged their horological scope by a close cooperation not only with Jaeger LeCoultre in Le Sentier (Vallée de Joux), but also with A. Lange & Söhne in Glashütte (Germany).