Tortoise-shell, gold, mother-of-pearl and enamel, key-winding, horizontal singing-bird box.
Rectangular cabinet made of tortoise-shell panels,with a three-coloured gold and mother-of-pearl decoration inlaid on all sides representing a partially engraved floral motif; oval cover of the bird enamelled with a scene depicting a mountain landscape; on the right side of the cabinet, a pull tab to operate the bird mechanism.
Singing-bird mechanism, rectangular (~ 85 x 45 mm.), brass, fusee and chain, bellows and cams; the revolving bird with moving wings, beak and tail, controlled by two cams mounted beneath the barrel wheel (winding by key, under the box). 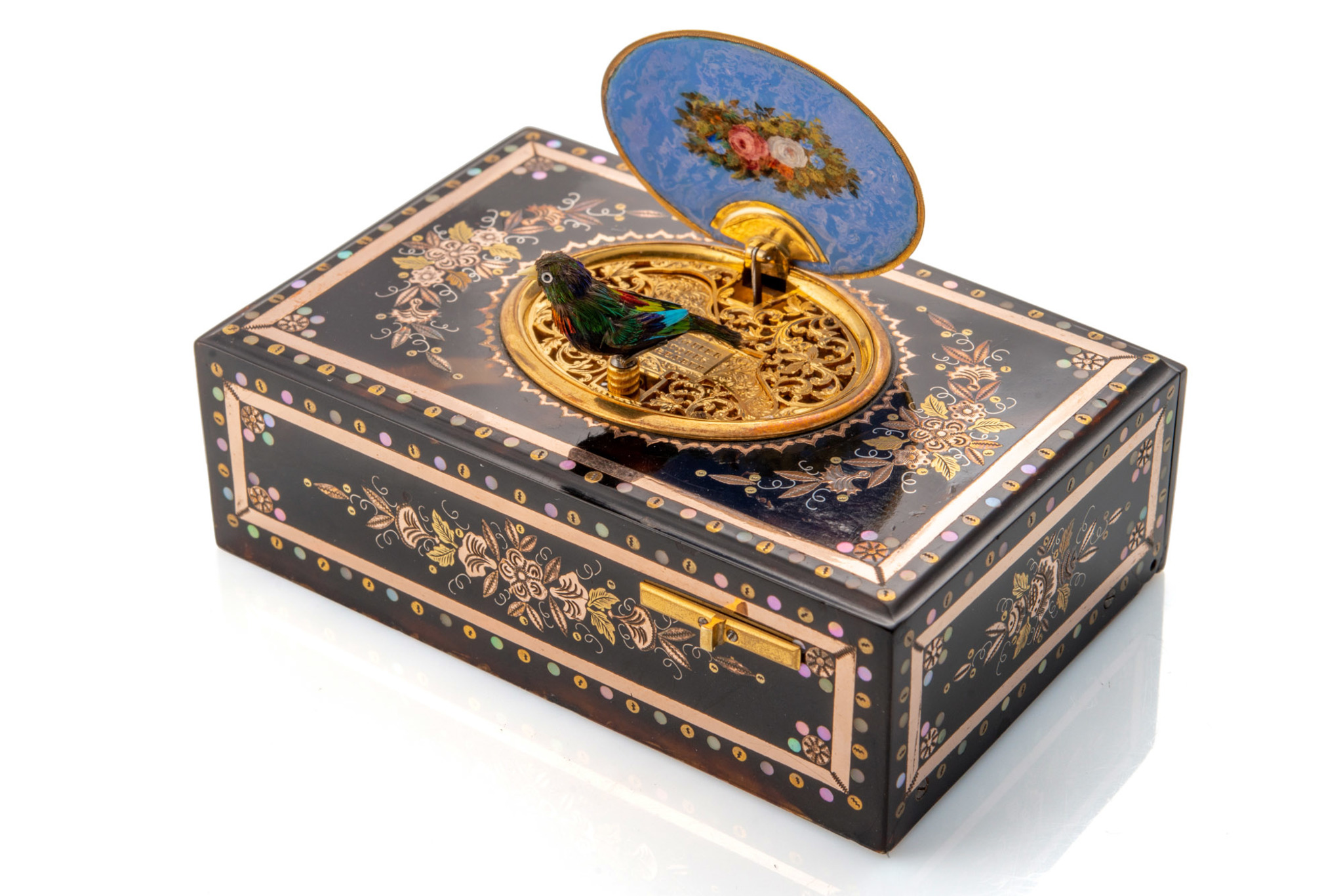 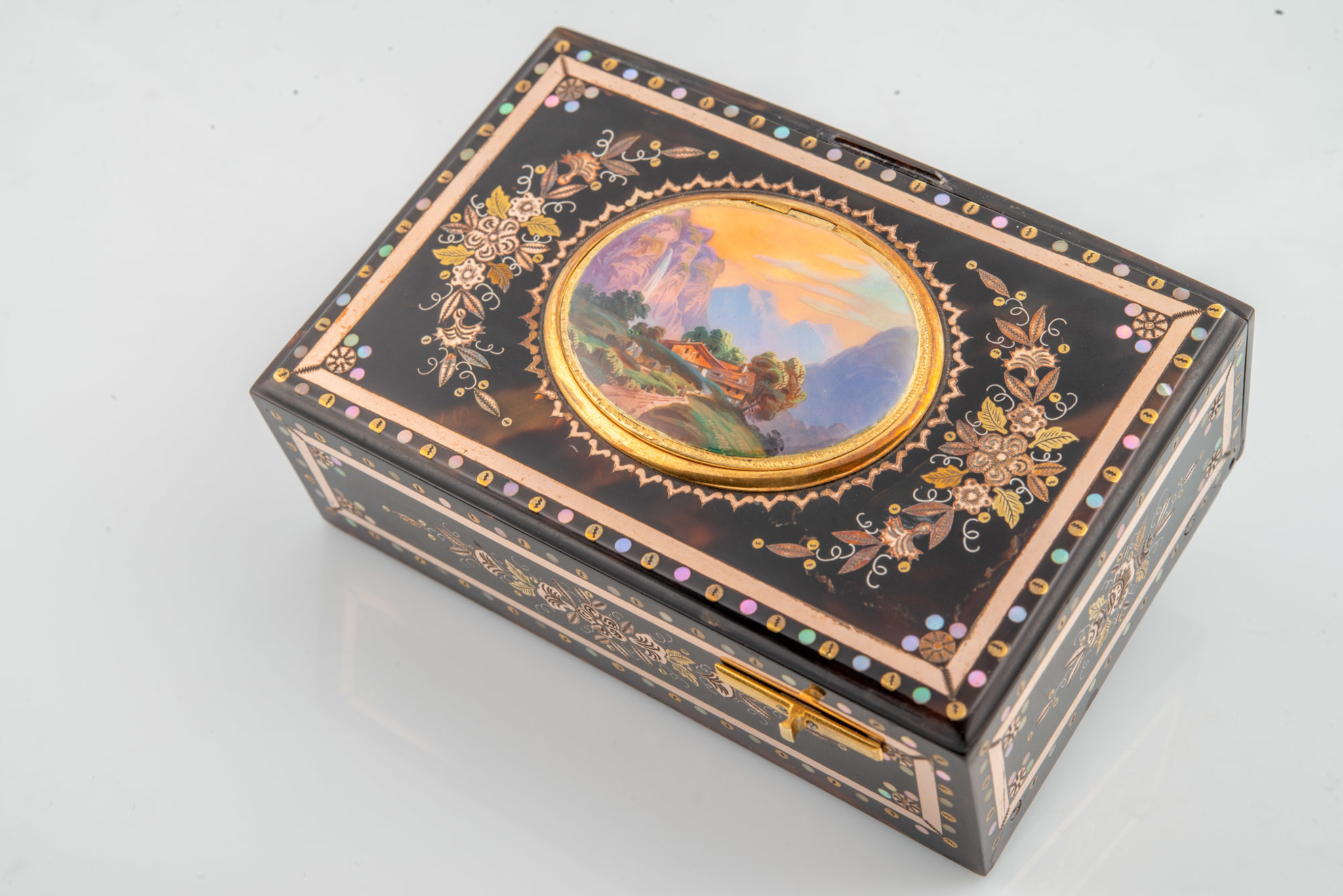 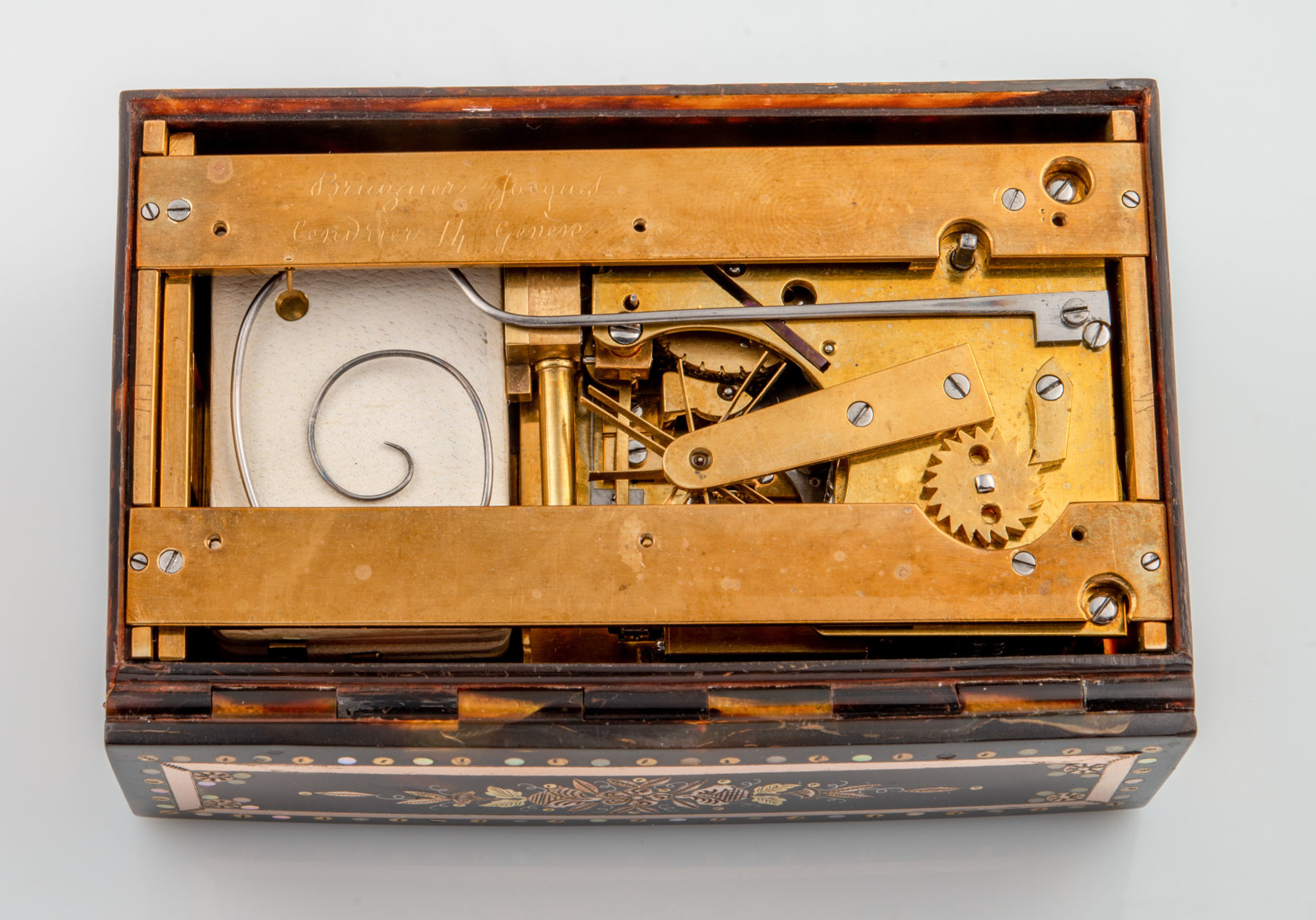 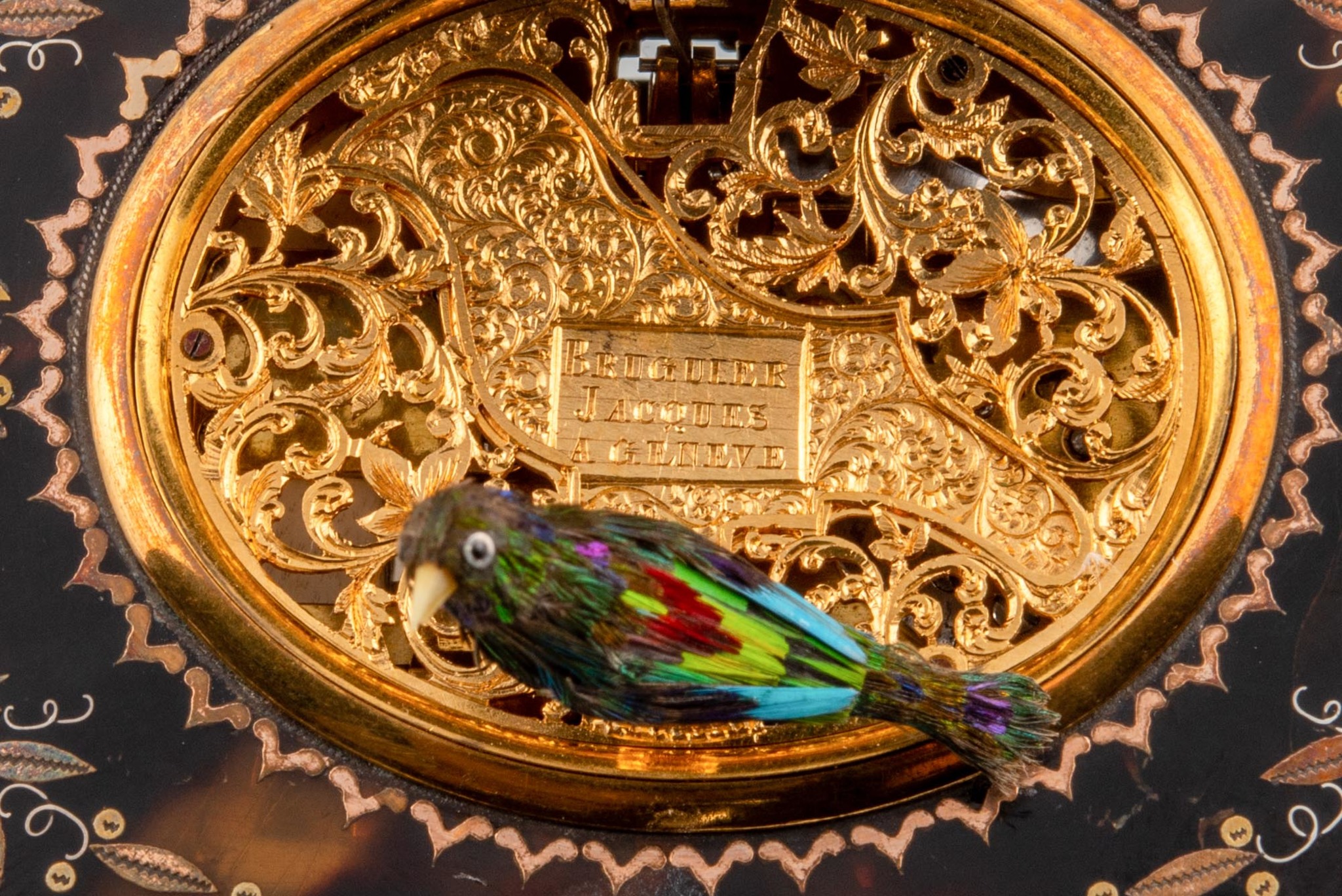 The scene painted on enamel represents a mountain view which reminds us of the Staubbach waterfall near the village of Lauterbrunnen in the Bernese Oberland; others may see the Pissevache waterfall in Valais.
The decoration inlaid in gold of different colours and mother-of-pearl is quite exceptional on this kind of cabinet; which makes this richly decorated singing-bird box quite unusual and very attractive.
When the mechanism of this singing-bird box is activated, the oval lid opens automatically and the bird appears, pivoting from side to side, flapping its wings, moving its tail, opening and closing its beak; when it stops singing, after his performance, it falls backwards, goes through the grille, and then the lid closes.
This mechanical marvel is obtained by means of a small bellows mechanism that feeds air to a variable whistle, itself actuated by a system of cams and levers whose driving force is generated by a barrel spring.
The plate at the back of the cabinet consists of a hinged door that provides access to a compartment to house the winding key.
--
Lauterbrunnen is a Swiss municipality in the canton of Bern, located in the administrative district of Interlaken-Oberhasli, called Verwaltungskreis Interlaken-Oberhasli in German. The village of Lauterbrunnen nestles at the bottom of a U-shaped valley. The Lauterbrunnen valley is one of the deepest in the Alpine chain in relation to the height of the mountains that rise directly on either side. Rarely more than a kilometre wide, between the limestone precipices, sometimes completely perpendicular, everywhere an extreme slope. The valley owes its many waterfalls, from which it takes its name, to this shape. The most famous of these is the Staubbach, less than a kilometre from the village of Lauterbrunnen. The height of the waterfall is between 240 and 270 metres, one of the highest in Europe.
The Pissevache or Pissevaches waterfall, also known as the Salanfe waterfall, is a 116 metres high waterfall located between Martigny and St. Maurice in Valais. It is fed by the waters of the Salanfe.

Bruguier, Jacques (1801-1873)
Jacques Bruguier was born in June 1801 in Geneva; a city that had just been annexed to France by the new French Republic (April 26, 1798). He is the son of Jean-Abraham Bruguier, watchmaker, and Rose Lamon. In these troubled times, Jean-Abraham Bruguier took his family to the Ardèche, but Jacques later returned to Geneva.
In 1852, it is known that he worked as a mechanician for Charles-Abraham Bruguier (1788-1862), the famous manufacturer of “Pièces à oiseaux chantants, d’automates & de tableaux mouvants” (Pieces with singing-birds, automatons & animated paintings), and lived with him at the Grand-Prés du Petit-Saconnex, No. 518, near Geneva.
On January 13, 1853, Jacques Bruguier married Jacqueline-Françoise (1814-1899), the daughter of Charles-Abraham Bruguier; he thus became her son-in-law (and not her son as often reported). She also works for her father, pinning the cylinders of musical boxes. Jacques Bruguier then opened his own workshop in the rue des Pâquis in Geneva.
When Jacques and Jacqueline got married, Jacques was already over 50 years old and Jacqueline almost 40 years old. The couple nevertheless had two children, Abrahamine-Charlotte (b.1854) and Jacques-Alexandre (1855-after 1890).
From 1853 to 1861, the family lived in Place de la Madeleine, No. 166. In 1867, Jacques Bruguier opened a new workshop on rue du Cendrier, No. 14. He died on October 7, 1873; his address was then rue Bonivard No. 6.
From 1870 to 1886, Jacques-Alexandre Bruguier lived on rue Bonivard, No. 6, and, between 1887 and 1888, on rue Neuve-du-Temple, No. 7. He is registered as a “Snuff-box Maker” but seems to have stopped this activity around 1890.