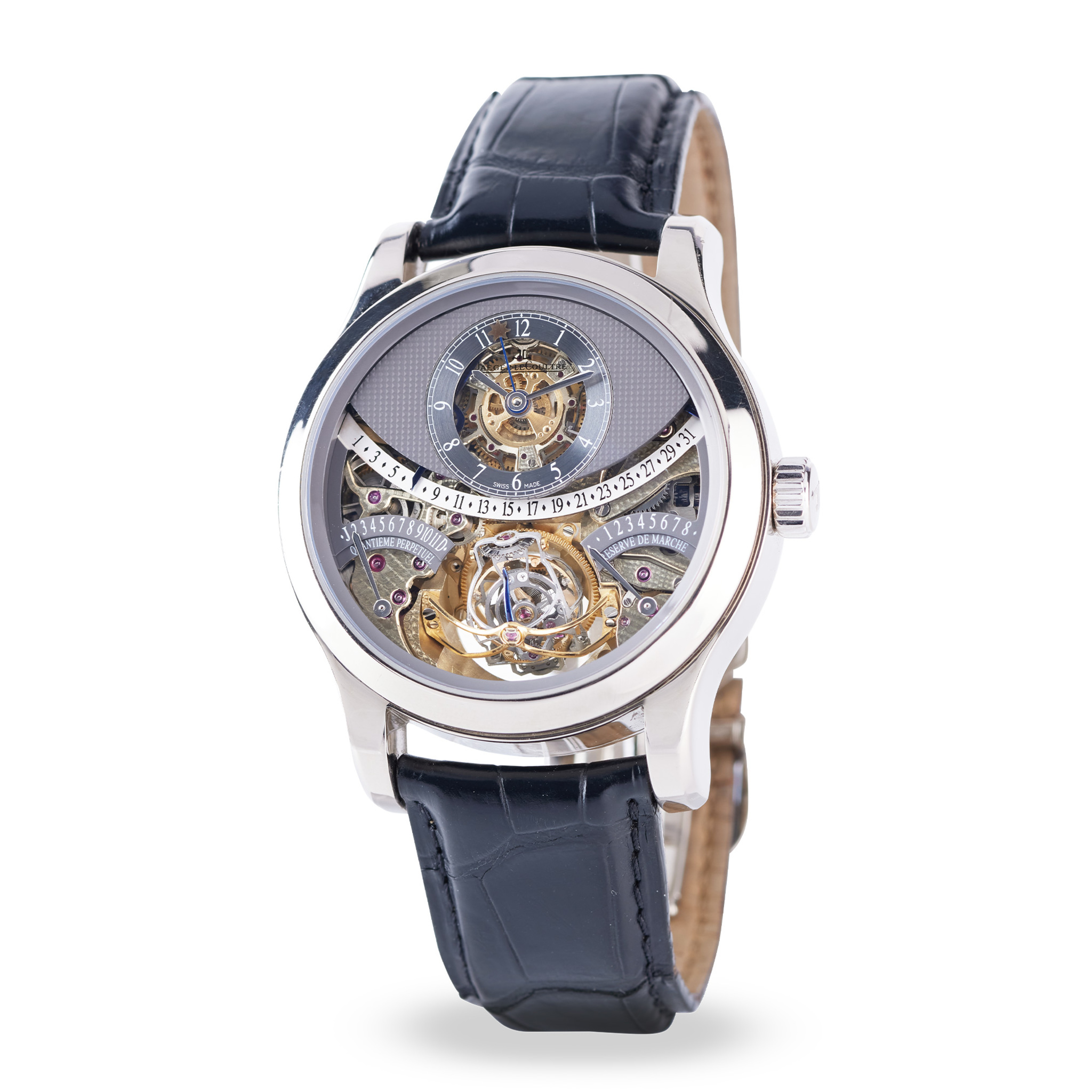 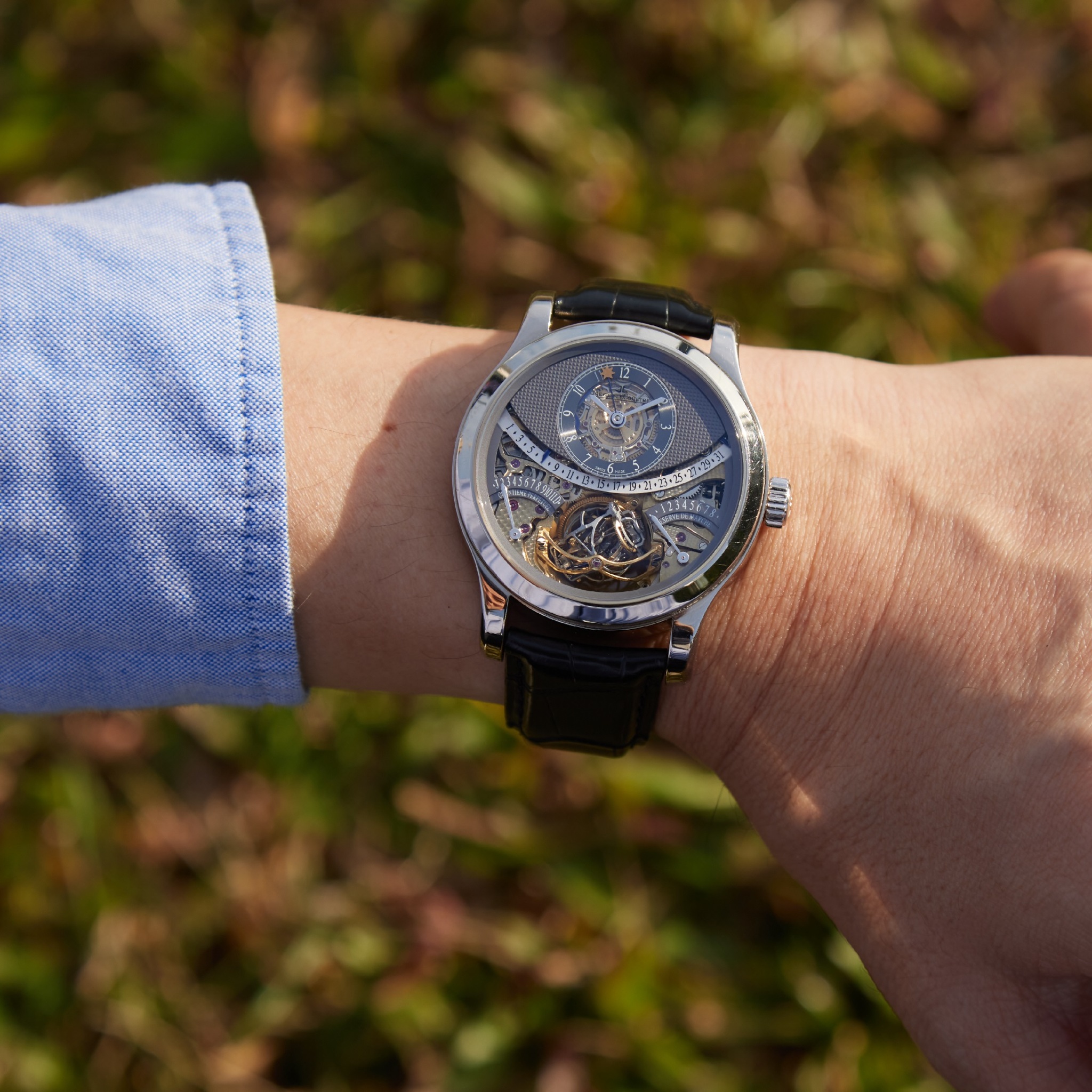 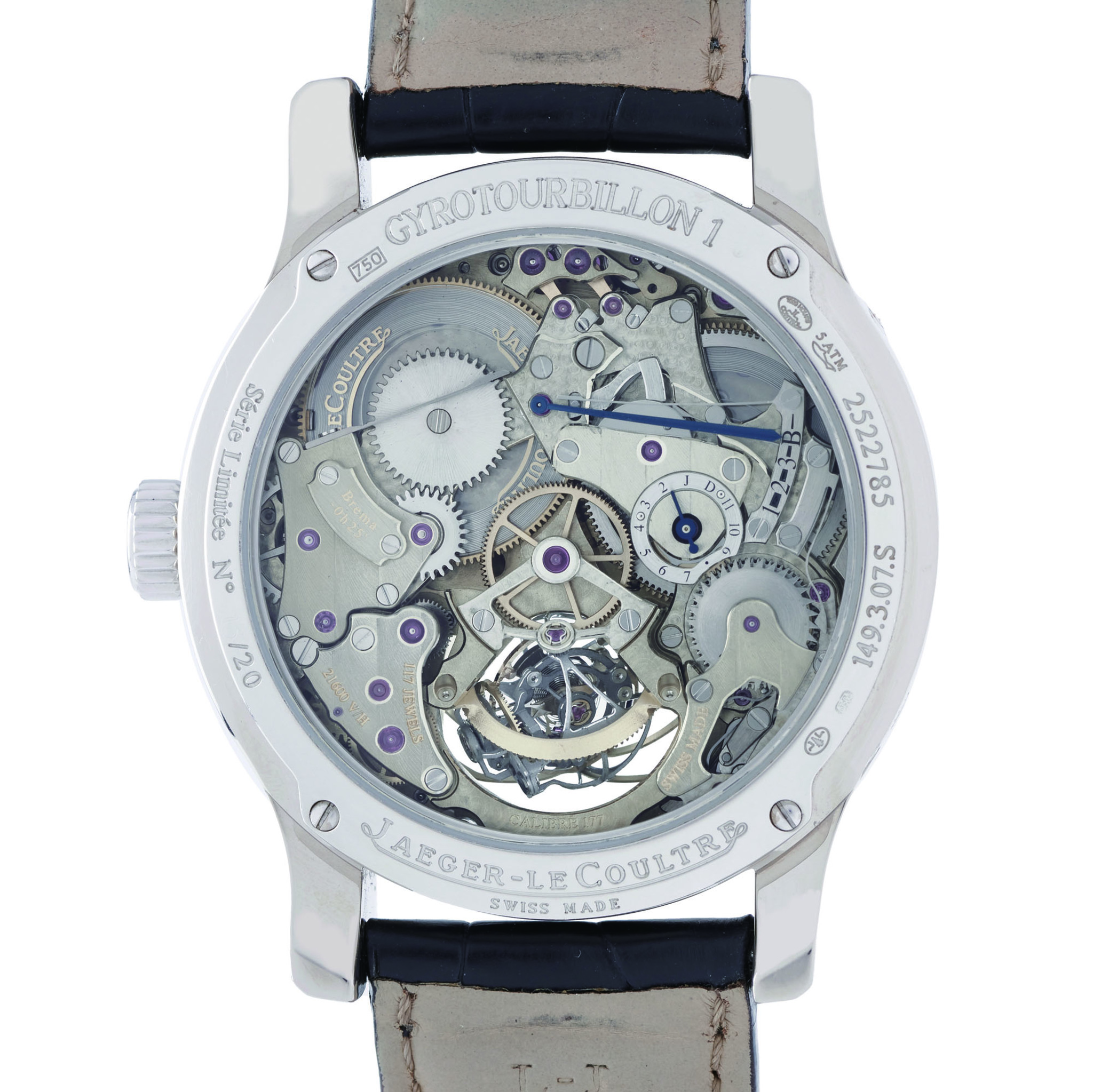 Jaeger-LeCoultre “Gyrotourbillon 1”
The “Gyrotourbillon 1” is probably the most well-proportioned tourbillon wristwatch ever made, and the most elegant in operation. It was produced by genius watchmaker Eric Coudray and designer Magali Metrailler
This watch is a tour-de-force of watchmaking and contains 600 individual parts. Instead of jointly providing power in direct connection with the centre-wheel as in most two-barrel watches, the “Gyrotourbillon” barrels actually transmit power via the first to the second wheel in a linear fashion, to provide greater and more regular power. The barrels are capped with sapphire-crystal to reduce friction and allow viewing of the mainsprings.
This watch also has a true equation of time mechanism, so-called “running” or “marchante”; a very unusual feature in a wristwatch.
Three new patent mechanisms are incorporated in this watch:
The Spherical Tourbillon
The calibre 177 is a dual-axis tourbillon of extremely lightweight construction, weighing only 0.035 grams, due to the outer cage’s being machined from aviation-grade aluminium and the inner one from titanium. The outer cage rotates at a speed of one revolution per 60 seconds and the inner one at a rate of 24 seconds or 2.5 times per minute, resulting in an extremely graceful display and allowing full visibility of the gold balance.
Double Retrograde Date
This intriguing and exciting mechanism works in an ingenious manner: one hand is in use for the fi rst half of the month while the other waits in the wings to the left until the changeover, which occurs on the 16th of the month. Throughout the day the mechanism stores small amounts of energy from the movement, releasing it all at once at midnight in one instantaneous jump, commonly called the "whip". The advantage of this mechanism is that the calendar functions work without any adverse effect upon the timekeeping of the watch.
Perpetual Calendar
Eric Coudray chose not to simply add a standard perpetual calendar module to the calibre; instead he designed an entirely new patented mechanism which makes the necessary corrections to the day, date and month for every day of the year of the four-year cycle.
--
This Jaeger-LeCoultre wristwatch represent the pinnacle of horological technology manufactured by the company, the so-called “Grande Maison”, ate the beginning of the century and was originally sold as a set named “Hybris Mechanica”, including the “Gyrotourbillon 1”, the “”Gyrotourbillon 2” and the “Triptyque”.