Marquetry inlaid wood (walnut, burr-walnut and fruitwoods), glass and gilded brass, self-winding, vertical rectangular-shaped, mantel Art Nouveau-style clock wound by barometric pressure changes, with three horological complications: 1 000-year calendar (spiral-shaped outer dial with concentric index), Month of the year (aperture at 12 o'clock; indications given in French), Age and phases of the moon (subsidiary dial, graduated from 3 to 27 (in place of 0 to 29 A1/2), and aperture at 6 o'clock) Moulded cabinet inlaid overall, the front of the secret drawer with a scene inspired by "Aurora" (aurora / dawn) of Alphonse Mucha (1860-1939), Czech Art Nouveau painter and decorative artist, known best for his distinct style; the inside of the side doors depicting portrait medallions of the "Aurore" (aurora / dawn) and "Crépuscule" (dusk) inspired by this master. 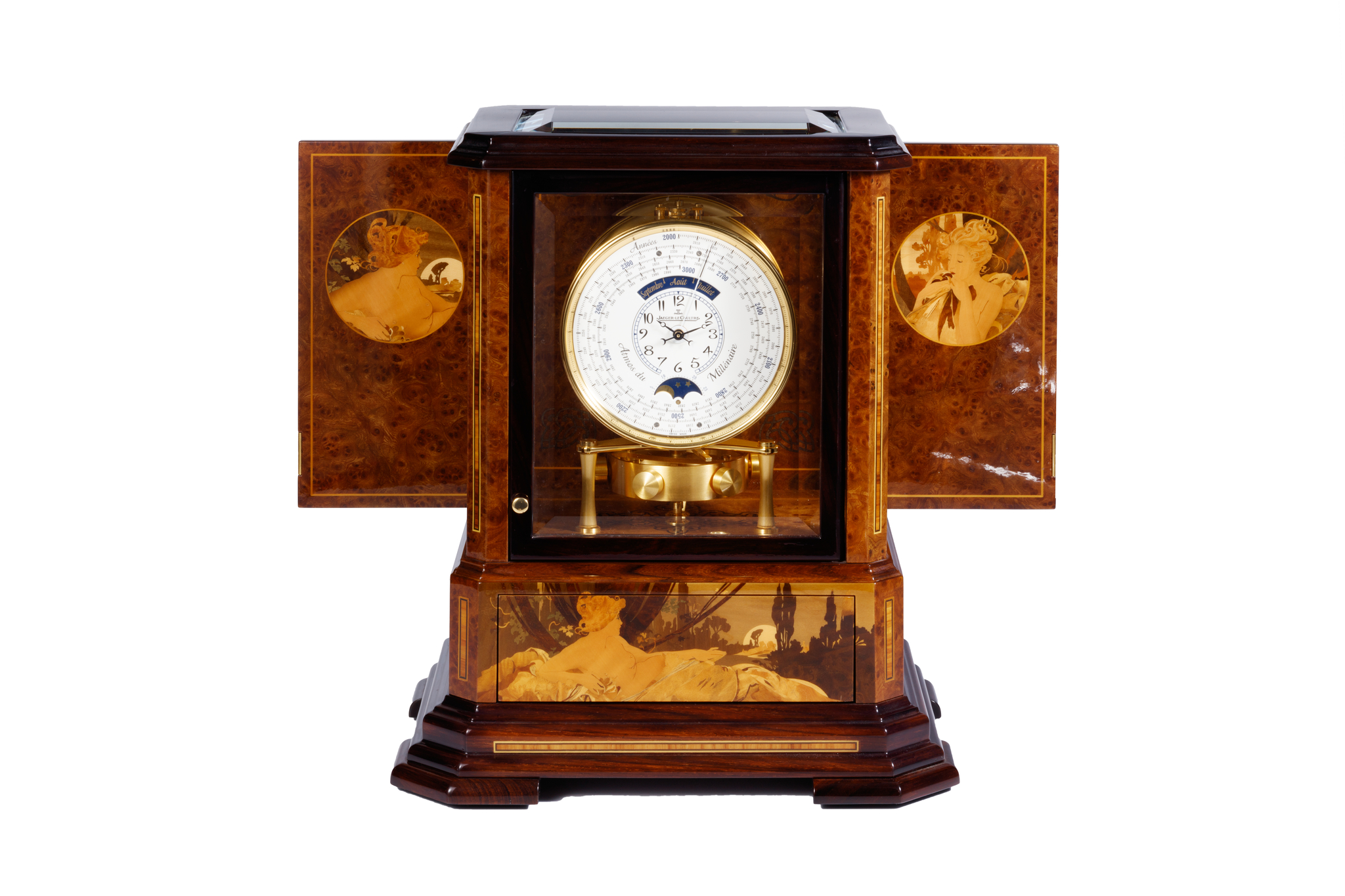 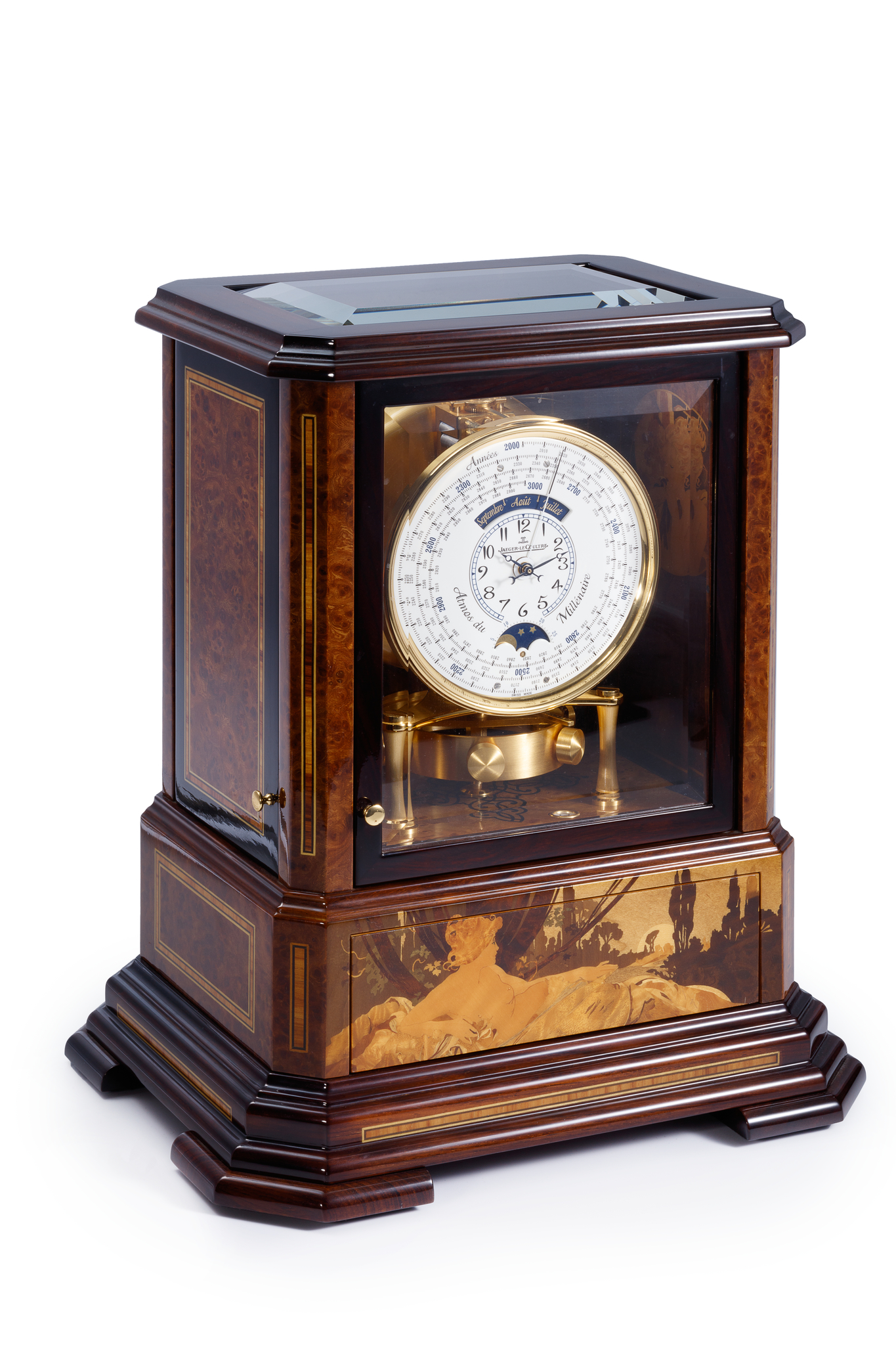 Jaeger-LeCoultre Atmos Clock The Atmos clock was invented by Neuchâtel engineer Jean-Léon Reutter (1899-1971). From his youth, he was preoccupied by the idea of industrially producing a clock that could be wound by atmospheric fluctuations, and in 1928 he succeeded. In fact, in a hermetically sealed capsule is a gas that expands and contracts in response to even minute changes in temperature and causes mechanical movement. Reutter's patent was first licensed to a French company who exploited it until 1935. Around 3 000 examples were produced. Subsequently, it was purchased by Jaeger-LeCoultre. After difficult early years, by 1979 there were half a million such clocks which quickly became popular and prestigious gifts for the important heads of states during their visits to Switzerland. The Atmos is a clock "qui vit de l'air du temps" (who lives on air). Atmos du Millénaire Marqueterie, "Aurore", "Crépuscule" and "Le Temps qui passe" This extraordinary "Atmos du Millénaire Marqueterie" was made in 1999 in a limited edition of three series of 25 pieces each, to celebrate the third Millennium (under the Reference 555.126.3). With the 1 000-year full calendar and perpetual barometric pressure-driven movement Jaeger-LeCoultre began a "1 000-year journey" beginning on January 1st 2000. The clock would serve as "the precious receptacle of 1 000 years of important moments, traditions, secrets and joys, which undoubtedly would flow through the tide of countless generations". Therefore, the secret drawer has been fitted with ten lacquered engraved gilt tubes each containing a parchment. The pen and ink are provided so that generations of owners will be able to "record significant family exploits or the grand hours of the millennium". As a significant record in the Atmos history, Jaeger-LeCoultre recorded all the names of the owners of these "Atmos du Millénaire Marqueterie" clocks. Written down on parchment these names are stored in a sealed spherical glass container. This container is now in the private collection of the Manufacture Jaeger-LeCoultre in Le Sentier (Vallée de Joux), Switzerland. Jérôme Boutteçon Master inlayer, received the 1994 award as France's finest craftsman. The marquetry of this clock contains around forty different species of wood. On the front of the clock, the secret drawer can be inlaid, either with "Aurora" (aurora / dawn) or "Crépuscule (dusk) or "Le Temps qui passe" (The Time that passes); three scenes inspired by Alphonse Mucha (1860-1939). International auction houses have already sold the following clocks of these three series of 25 pieces each: Secret drawer with "Aurora" motif: - No. 4; Antiquorum, Geneva, May 12, 2013, lot 177, for the amount of CHF 60 000.- - No. 11; Antiquorum, Geneva, November 13, 2016, lot 468, for the amount of CHF 62 500.- Secret drawer with "Crépuscule" motif: - No. 13; Antiquorum, Geneva, March 16, 2014, lot 104, for the amount of CHF 50 000.-; Christie's, Amsterdam, 30 June - 1st July, 2009, lot 532, for the amount of A€ 21 500.- Secret drawer with "Le Temps qui passe" motif: - No. 13; Christie's, New York, December 17, 2013, lot 117, for the amount of USD 81 250.- (cataloguing as "The Spring") Alphonse (Alfons) Mucha Born in 1860 in Ivancice Moravia, he worked as a fresco painter in Germany before moving to Paris in 1887 to study at the Académie Julian. At the age of 34, Mucha had his break-through after seven years of struggles. A poster he had been commissioned to create for Sarah Bernhardt's play, "Gismonda", gave rise in 1895 to the Art Nouveau style of painting. Almost overnight he became famous. Over the following years, Mucha created some of the most instantly recognizable Art Nouveau images, including a series of posters entitled the "Four Seasons". Mucha was such an influential persona and artist that when Germany invaded Czechoslovakia in 1939 he was one of the first people brought in for questioning. This session with the Gestapo was to mark the end, and shortly afterward he died on July 14, 1939.