Rectangular-shaped, mounted in a cage-work of gold chases with scrolls, flowers, shells and exotic birds, with a band of opaque white enamel around the rim of the lid bearing the inscription in gold "L'ESPOIR DE TA FIDELITE FAIT MA SEULE FELICITE"; a diamond thumb-piece serves to open the steel sprung catch; the inferior of the nécessaire is contain ivory tablets held by a rivet, two glass scent bottles with gold covers, a combined nail- file and tweezers, a gold handle with detachable steel corkscrew and spike, a pencil, a spoon, a combined ear- and toothpick, and a gold mounted ble glass mirror case which is gilt in the manner of London workshop of James Gilles; a space remains for a penknife which is now missing; je interior of the lid set with a mirror. 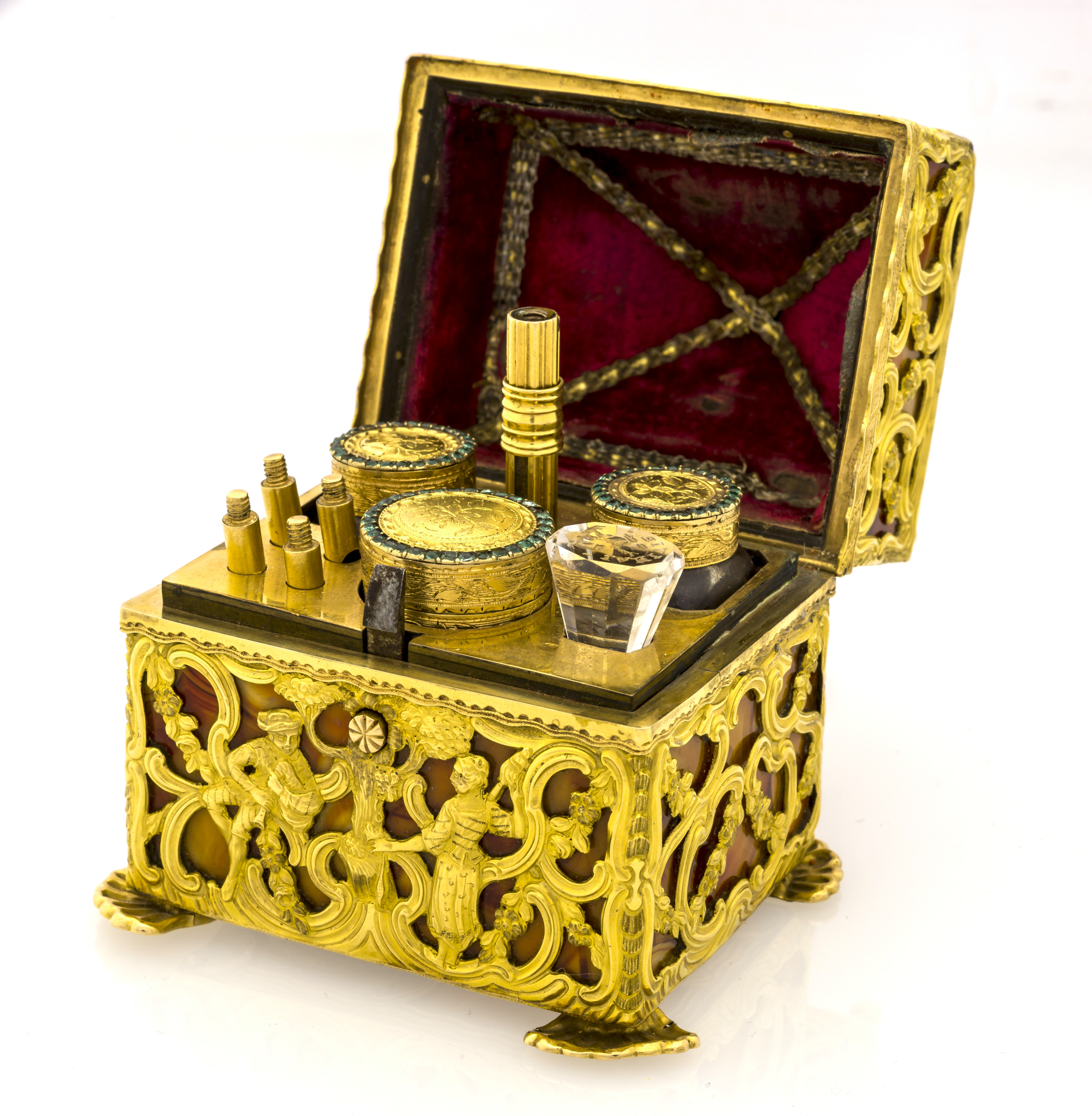 DIM. 5,9 x 5,1 x 4,6 cm. Provenance The Maud Feller Collection (Inv. K167D). Note Several nécessaire of this form, which have characteristics close enough to allow them to be considered the products of a single workshop, are known. Several examples have passed through the major auctions companies, some fitted with watch or musical movements signed by the famous James Cox of London, who often produced for the trade markets. Museum as the Louvre in Paris, the Patek Philippe Museum in Geneva kept examples of this maker in their collection. James Cox (c.1723-1800), London Was the son of Henry Cox, a tailor. He became Free in 1745. In June 1745 he set up shop in Racquet Court, where he remained until 1756. In 1756, Cox entered into partnership with Edward Grace, moving to larger premises in Shoe Lane. However, Cox & Grace declared bankruptcy in November 1758. During the 1760s and early 1770s Cox became famous for luxurious musical and automaton clocks and watches, made of precious metals and studded with precious stones, destined particularly for the court of the Chinese Emperor James Cox died in Watford in early 1800 and was buried in the family vault in London's Bunhill Fields on February 26 of that year. Bibliography Le Corbeiller, Clare, "James Cox. A biographical Review", in Burlington Magazine, vol. 112, June 1970, May-August 1970, pp. 351-358. Smith, Roger, "James Cox (c.1723-1800), A revised biography", in Burlington Magazine, June 2000. Moss Agate Agate, a variety of quartz, was often used by the engravers of antiquity. It was called achates, after a river in modern-day Sicily, on whose banks it was found. The name was used for stones of various colours, and to further distinguish them, the words leucachates, cerachates or hoemachates were used, depending on whether they were white, wax-coloured or red. The stones called dendrachates were those with patterns resembling herbs or trees: thus the name dentritic agate. Certain of these agates appear to contain moss: there are sometimes called moss agates or pierres de mocha in French (from the Saxon moch, meaning moss). Lastly, those stones called agates figurées in French feature unusual images. To be sold without reserve