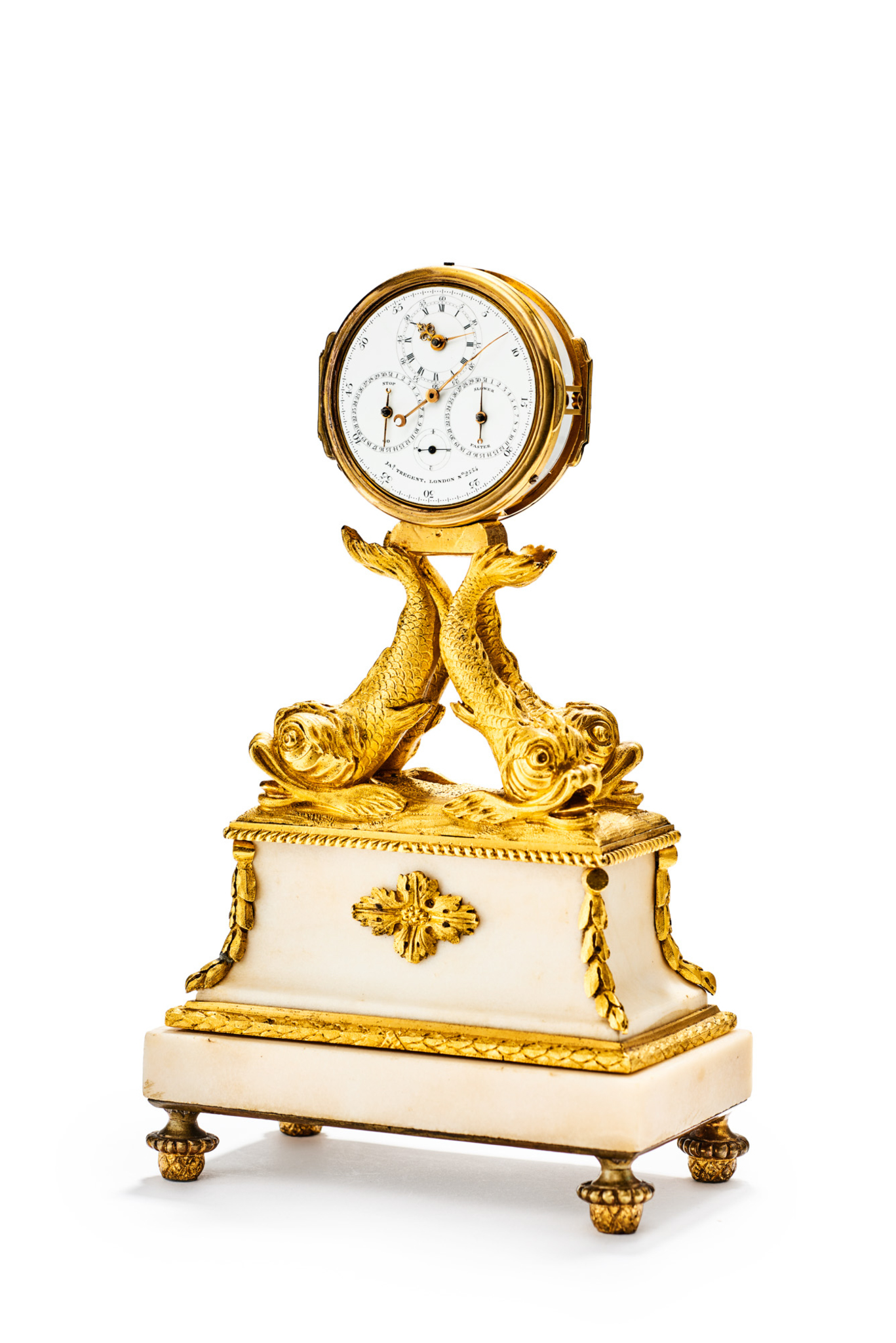 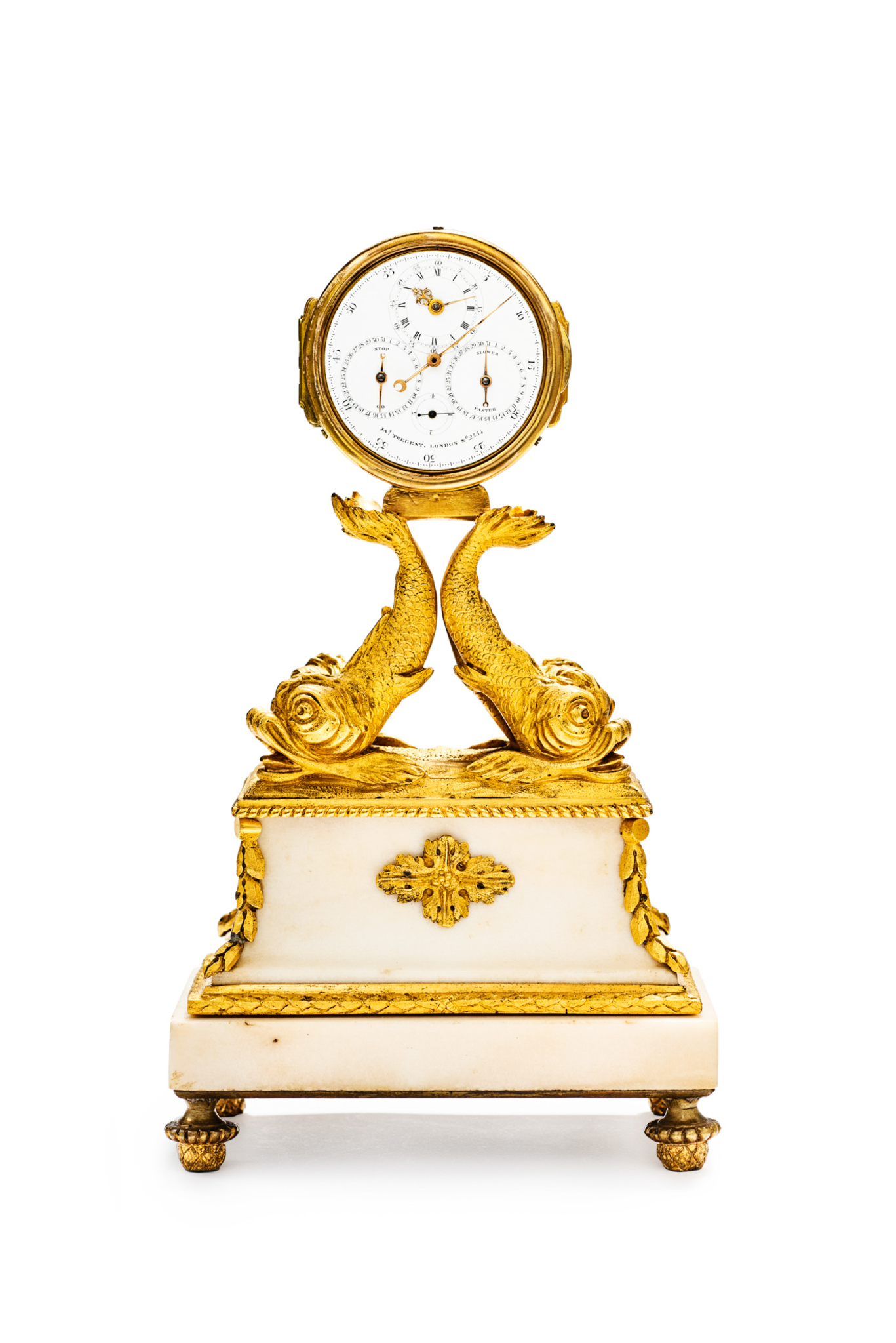 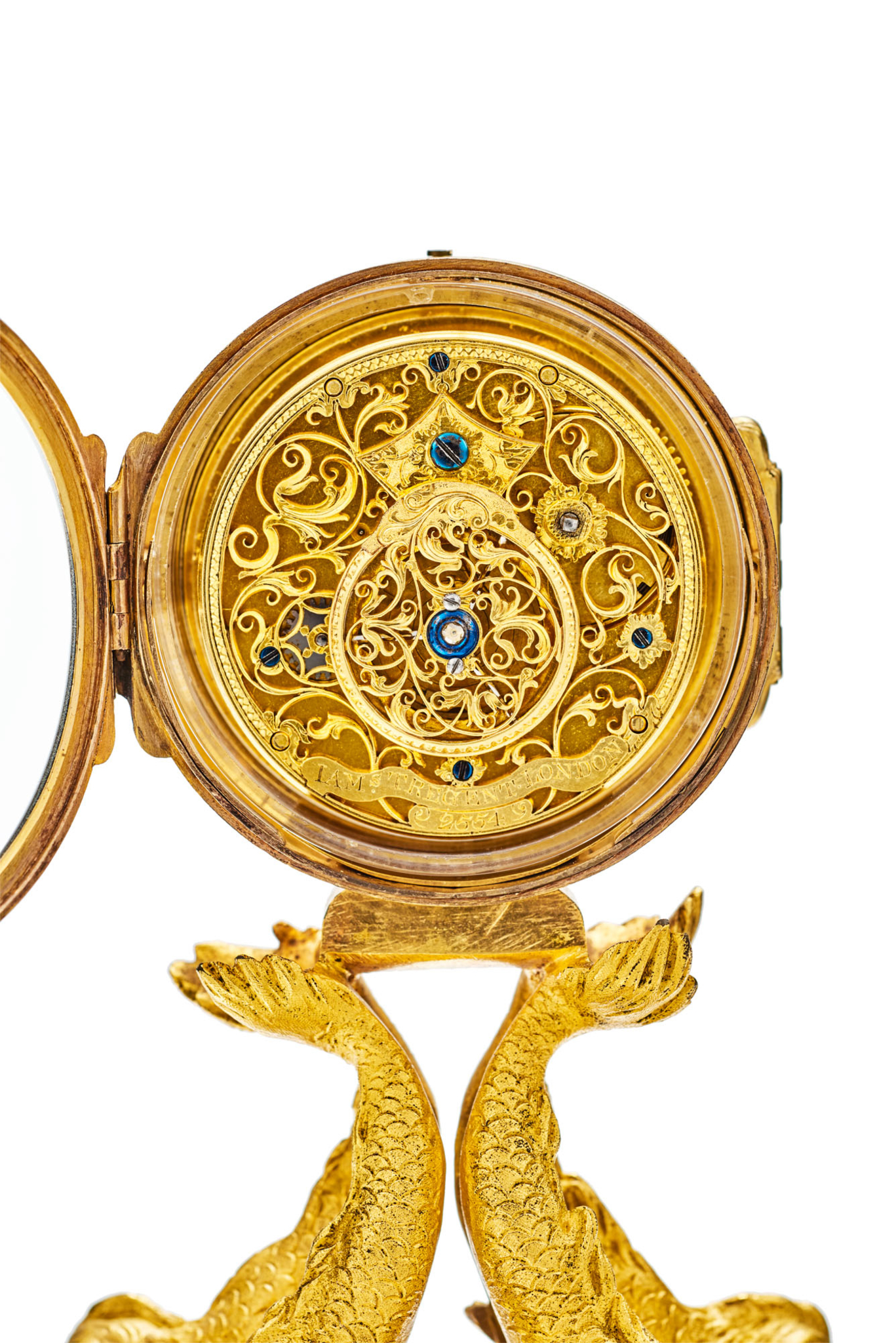 Provenance
• Formerly Collection Antonio María Pérez de Olaguer Feliu (1907-1968), Barcelone; Spanish writer and Carlist militant. • Antiquorum, Geneva, auction, October 11, 1987, The Property of Mr. Pambukian and from various sources, lot 196.
The subject of this clock symbolises Love’s triumph with its sacred urn supported by Venus’ dolphins.
This clock is typical of James Tregent’s end-of-life production; a few rare examples are known, with more or less similar dials. The architecture of these precious clocks is always in monstrance, supported either by dolphins or cornucopia.
Tregent, James
James Tregent was a watchmaker of French extraction, first recorded in London in 1759. He was admitted Honorary Freeman of the Clockmaker’s Company of London in 1781 and died in 1808.
He was a talented maker renowned for its well-proportioned cases with beautiful enamel dials; his movements were generally well designed and finely finished. Several longcase and bracket clocks are known, produced between 1760’s-1800’s.
He made also enamel watches, with or without repeater, sometime with matching chatelaine, often decorated by the workshop of George Michael Moser (Victoria & Albert Museum; Toulouse, Musée Paul Dupuy).
He was appointed “Watch Maker to Prince of Wales”, George Augustus Frederick (1762-1830), future George IV, King of the United Kingdom of Great Britain and Ireland and King of Hanover (1820-1830).
Tregent was known to have mixed in the most fashionable circles of the day, he was an intimate of David Garrick (1717-1779), English actor, playwright, theatre manager and producer, Richard Brinsley Butler Sheridan (1751-1816), Irish satirist, playwright, poet and long-term owner of the London Theatre Royal at Drury Lane, and also of other leading lights of the theatre.
With such a distinguished client base he was able to sell clocks of the finest quality, including those with the very latest enamel dials.
His brother, Anthony Tregent, was an enameller and it is for his refined enamel dials that Tregent is justly renowned. Around 1760, he produced extraordinary snuffboxes with painted on their lids and side panels the ca-
lendar of the year, so-called “A New Year Gift”, or others with music scores.
Richard C. R. Barder illustrates a fine Tregent World-time table clock with
six hour-hands and a twenty-four hours enamel dial (see: The Georgian
Bracket Clock, 1714-1830, Woodbridge, The Antique Collectors’ Club,
1993, p. 98, pl. IV / 18).
Tregent’s first premises were in London at 35 Strand, where he is recorded
in 1775. From 1780 he was working at 35 Cranbourne Street, Leicester
Square.
Museums
• London, British Museum.
• London, Guildhall Museum.
• London, Science Museum.
• London, Victoria & Albert Museum (Inv. M.365-1923).
• Toulouse, Musée Paul Dupuy (Inv. 18260).
• Glasgow, The Dennison Collection.
• The David Arthur Fasham Wetherfield († 1928) Collection of English Clocks.