Eight-Tune Triple-Mechanism Musical Clock Pierre Jaquet Droz, a la Chaux-de-Fonds. Made circa 1770. A magnificent and extremely fine and rare, Louis XV, mahogany and ormolu, 8-day going, hour and quarter-striking on two bells, musical bracket clock with two pipe organs and a cylinder musical mechanism playing on eleven bells with nineteen hammers, playing a selection of eight tunes with sequential consecutive movements on the hour or at will. 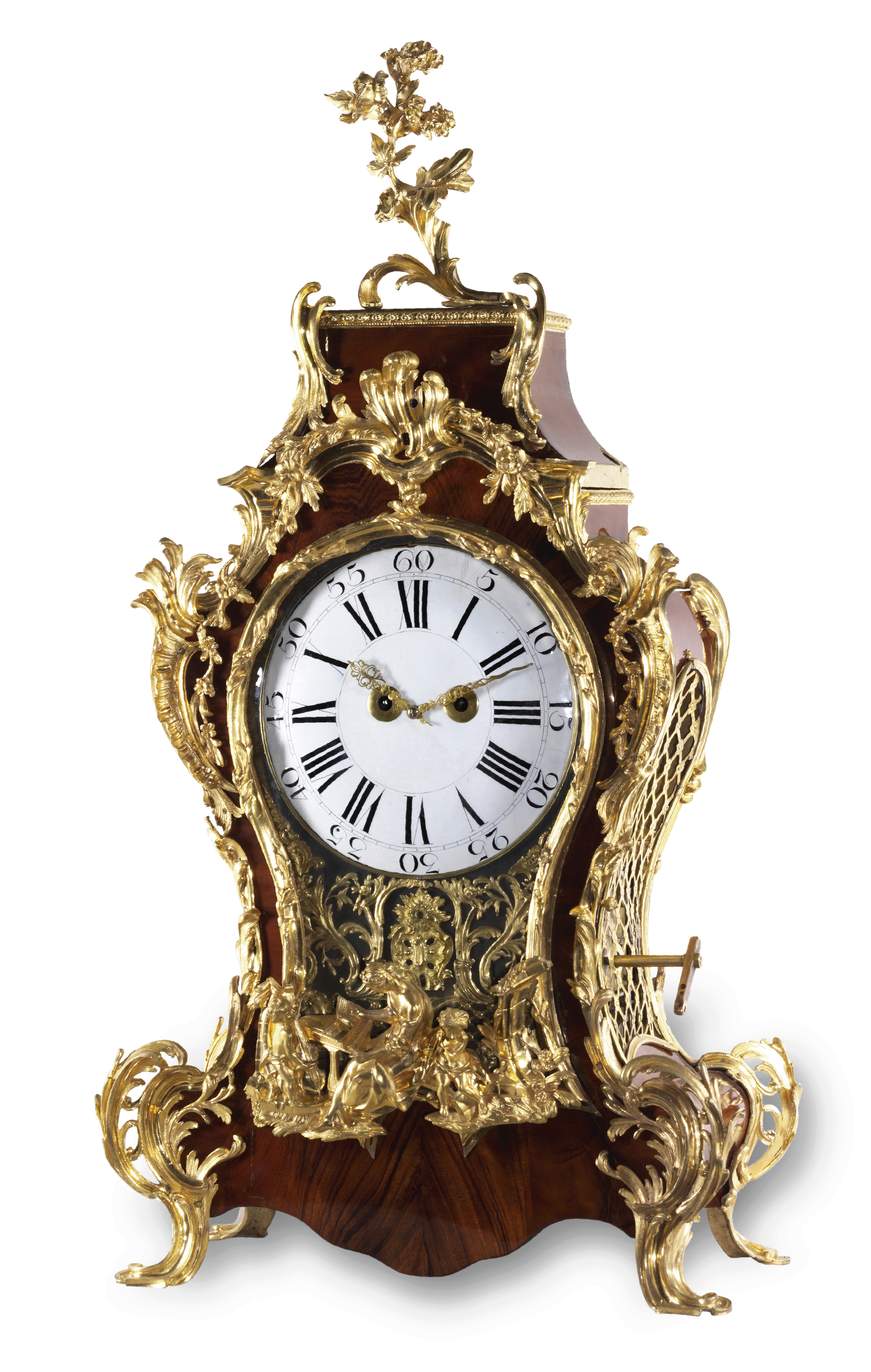 Very few clocks by Jaquet Droz with organs exist, this clock is exceptional because it has not only one, but two organs and a musical bell movement making it extremely rare and possibly unique. The clock is exceptionally well-made, the double barrel and double fusee arrangement for each of the the musical movements assuring long duration. On the hour the clock strikes the hours and then the musical bells activate, immediately after the bells finish the organs are then activated, the lower organ with a deeper tone, the upper small organ with a more high-pitched tune. The heavy, compacted brass movement is typical of Jaquet-Droz, the case is also exceptionally well made. During this period Jaquet-Droz was the only maker in Switzerland producing complicated musical clocks.
Pierre Jaquet-Droz (1721-1790)
Born on July 28, 1721 in La Chaux-de-Fonds, Pierre Jaquet-Droz was the son of a farmer who was an occasional clockmaker as well. He studied humanities and philosophy in Basel from 1738 to 1739 and then became interested in horology. We know little of him as a person, only that he was sober, serious, taciturn, and very careful in his work. On October 25, 1750, Pierre Jaquet-Droz married Marianne Sandoz, the daughter of Civil Lieutenant Abraham Louis Sandoz, who was later to accompany Pierre on his trip to Spain. At the age of thirty-four, Pierre Jaquet-Droz was left a widower. He never remarried, and seems to have devoted himself to his work as a watchmaker with all the more intensity. The second child of Pierre Jaquet-Droz and his wife Marianne, Henry-Louis, was born on October 13, 1752. Recognizing that he was a gifted child, his father sent him to Nancy to study music, science, mathematics, physics and drawing. In 1758, Jaquet-Droz made the long and difficult journey to Spain, to present his works to King Ferdinand VI.
When he returned, the sum he brought back enabled him to devote himself to the making of the famous Jaquet-Droz automata, the writer, draughtsman, and musician, and to found the successful Jaquet-Droz firm, in London and Geneva, for the making of extraordinary mechanical and musical pieces. Upon his return in 1769, Henry-Louis took his place in his father's work-shop alongside Jean-Frederic Leschot (1746-1824), an adoptive son. It was the beginning of a close and fruitful partnership between the three men. Pierre Jaquet-Droz was the first to make singing bird boxes and enjoyed an excellent reputation for complicated clocks, Neuchâtel clocks and automaton timepieces. When Pierre Jaquet-Droz grew old, the firm was taken over by his son Henry-Louis and Jean Frédéric Leschot, under the name of Jaquet-Droz & Leschot.
Pierre Jaquet-Droz died in Biel in 1790, at the age of 69. Upon his father's retirement from the family firm, Henry-Louis naturally replaced him, traveling to London to look after business. He also maintained an active interest in the Société des Arts, studying questions related to the well-being of the Genevese "Fabrique" and seeking solutions to problems which plagued his colleagues and fellow members. Henry- Louis' health was poor, however. Despite a journey undertaken to improve his condition, he died in Naples in November 1791, at the early age of 41. Subsequently, Jean Frédéric Leschot took over the firm.