Very fine and rare, pocket watch with quarter-repeater and its matching chatelaine; the enamel attributed to the workshop of George Michael Moser; 22K yellow gold, enamel and diamonds. 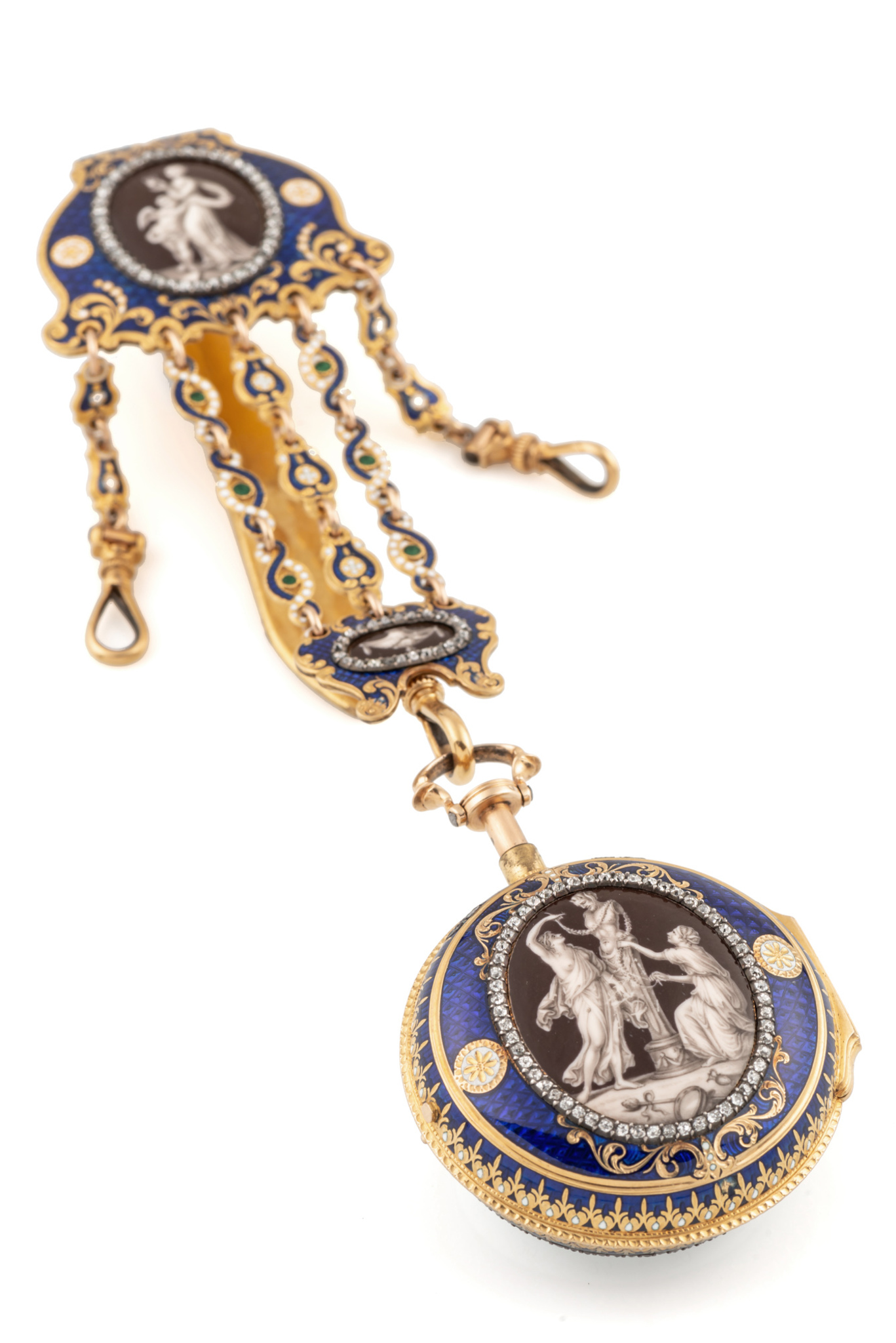 18K yellow gold, enamel and diamonds, open-face, key-winding, round-shaped, pocket watch, with one horological complication: • Quarter-repeater on one bell (activated by depressing the pendant) Royal blue flinqué enamel (translucent enamel over guilloché engine-turning) case-back, with, in the centre, a vertical oval-shaped panel, inside a diamond-set frame, painted in grisaille, showing a neo-classical scene with two vestals preparing the statue of a satyr, because the night comes, it will revive to honour them; the painting on enamel on gold attributable to George Michael Moser (1706-1783); diamond-set bezel. The chatelaine decorated en suite (on a gilded brass base) with another neoclassical scene showing a young woman carrying a vase (probably with a love filter) surrounded by a Cupid. The bell engraved with an etching needle “Drury”. The counter-enamel dial signed and numbered “Mattheu / 101”. Moser, George Michael (1706-1783) Born in Schaffhausen (Switzerland), he studied chasing and gilding under his father Michael Moser, a coppersmith. He moved to London in 1726 and worked for John Valentine Haidt, goldsmith and watch chaser. By 1737, he was working on his own account at Craven Buildings off Drury Lane. In addition to chasing he also produced fine enamel cases of which only few are known to survive. He designed the great seal of George III and painted enamel portraits of the royal children for Queen Charlotte. In the 1740’s, Moser became a leading figure at the St. Martins Lane Academy and later, in 1769, he became the first Keeper of the Royal Academy. His repoussé watch case work is among the finest to be found. Moser continued to work at least until the late 1770’s, and was active for the Royal Academy until the end of his life. On January 30, 1783, the “Gentleman’s Magazine” reported that “He was followed to his grave in grand funeral pomp by all the capital artists, Sir Josh. Reynolds at their head as chief mourner, Sir Wm. Chambers, &c. Ten mourning coaches, besides two gentlemen’s coaches, were in the procession.”. Bibliography • Edgcumbe, Richard, The Art of the Gold Chaser in Eighteenth-Century London, London, Oxford University Press in association with the Victoria and Albert Museum, 2000, pp. 85-132.