L. Leroy & Cie N°18902
Important oversize high frequency pocket chronometer especially made for scientific purposes, split-seconds chronograph, minute counter, Guillaume balance, , awarded a first Price and a Gold medal and a bulletin of the Astronomical Observatory of Besançon, in the category A "Chronométrie Epreuves Sportives" in 1939. Extract from the archive confirming a Gold medal. 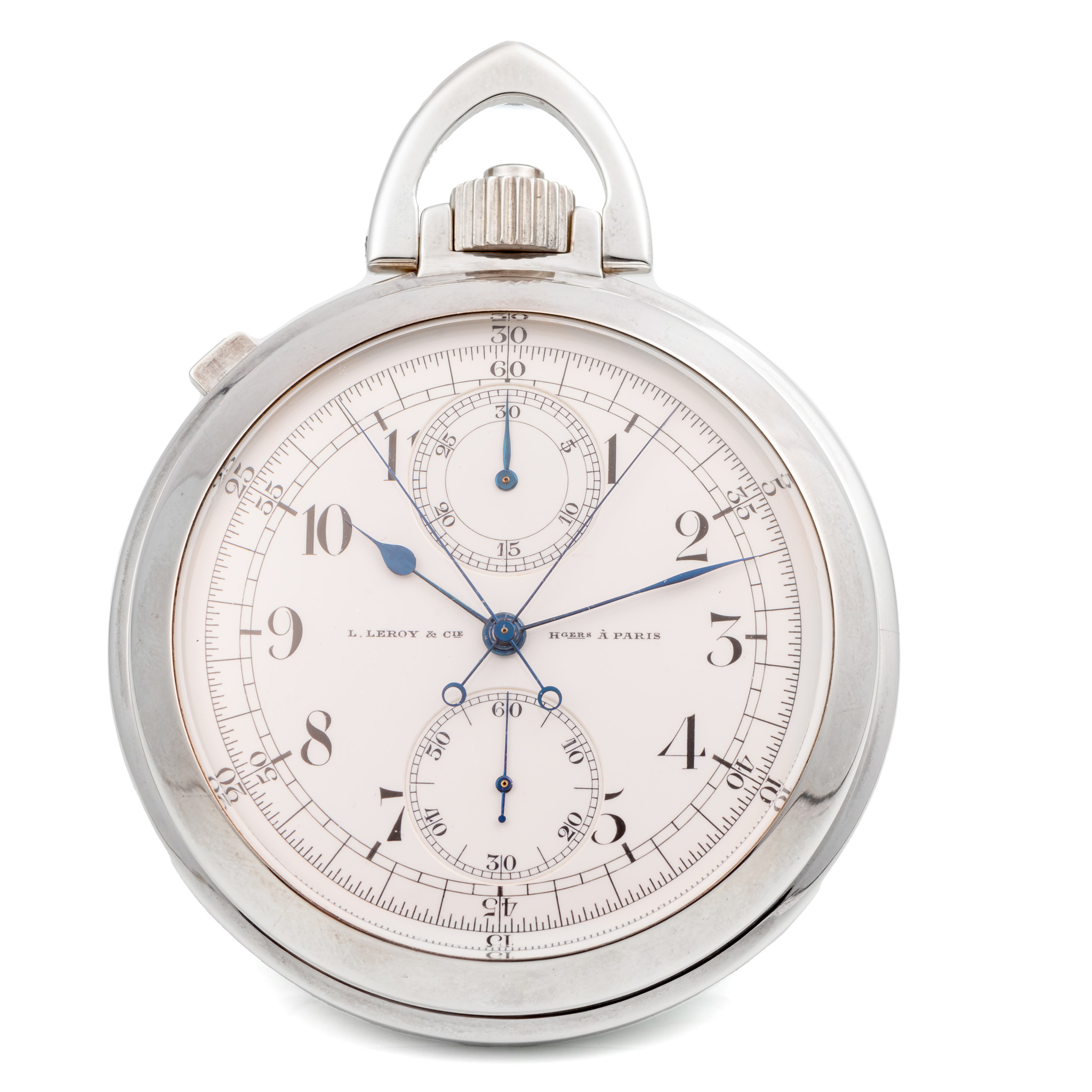 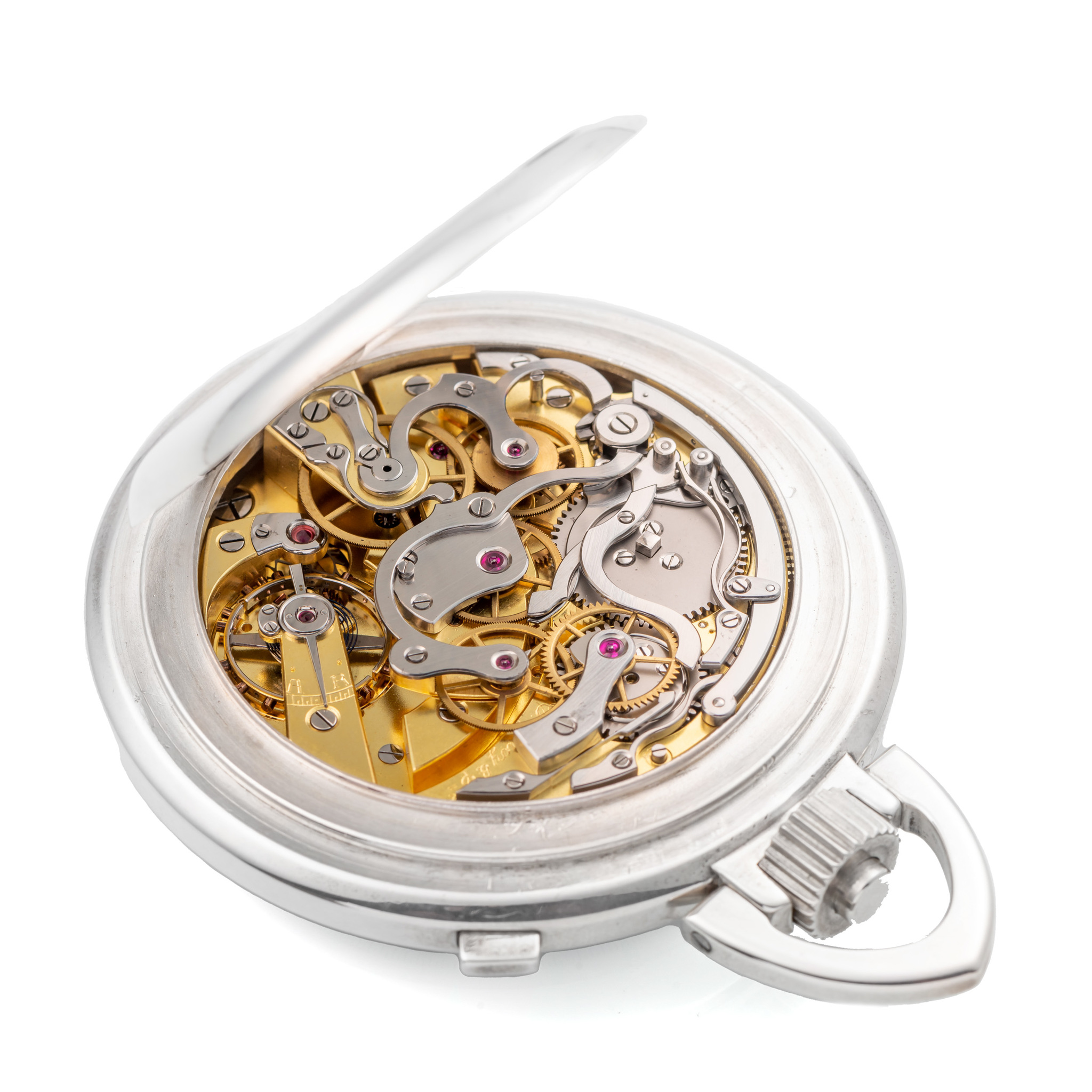 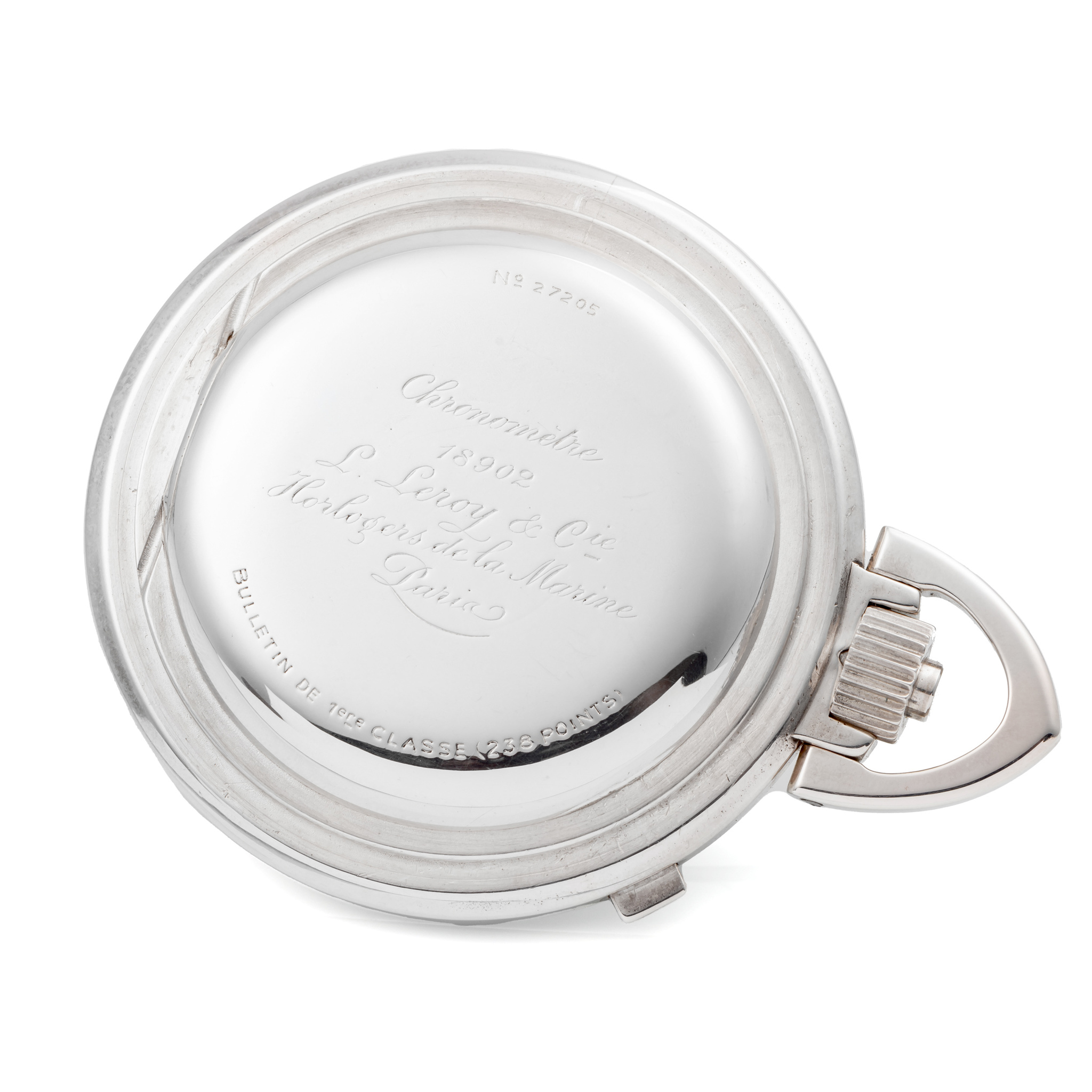 Accessories copy of the Bulletin of the Astronomical Observatory of Besan&ccedil;on, L. Leroy extract from the archive confirming a Gold medal, custom made wooden box

The watch was delivered on December 18, 1941, to the Institute of Meteorology and Physics of the Globe of Algeria (Institut de météorologie et de physique du globe de l’Algérie), University of Algiers (Algeria, then French possession), and paid on March 18, 1942, for the amount of 10 000 francs.

This high-frequency timekeeper has been especially created for scientific purposes; its chronograph part allows to indicate the 10th of second. This timepiece therefore served as a scientific instrument for the meteorologists and calculators of this institution.
The ebauche of this quality watch was probably made in the Vallée de Joux, in a workshop of the level of those of:
· Les Fils de Louis-Elisée Piguet, Le Brassus (Vallée de Joux).
· Les Fils de Victorin Piguet, Le Sentier (Vallée de Joux).
--

Guillaume balance
The Guillaume balance is a compensated bimetallic balance, made of anibal (an alloy of steel and nickel) and brass, after the works of Dr. Charles-Edouard Guillaume (1861-1938), with which the middle-temperature error is practically eliminated. The middle- temperature error (or Dent’s anomaly), is the difference between the rate of a chronometer at the mean temperature and the average of the rates at extreme temperatures. This type of balance was used by the horological manufactories since 1904.

Institute of Meteorology and Physics of the Globe of Algeria (Institut de météorologie et de physique du globe de l’Algérie, IMPGA)
This organisation was created in 1931 and depended on the University of Algiers. In the early 1940s, it was placed under the direction of Mr. Quesnay. Albert Camus (1913-1960), a French writer, philosopher, novelist, playwright, essayist and short story writer, worked there between November 1937 and September 1938.
The IMPGA’s mission was to promote the geophysical study of Algeria but also to take charge of the seismic surveillance of the territory; the earthquake constituting the main natural disaster in Algeria. This Institute undertook numerous studies in the fields of seismology, geomagnetism and gravimetry.
Today, this institution survives through the Centre for Research in Astronomy, Astrophysics and Geophysics (Centre de recherche en astronomie, astrophysique et géophysique, CRAAG), which resulted from the merger in 1980 of two bodies that existed during the colonial era, namely the Algiers Observatory (created in 1890) and the IMPGA.

Real scarcity of real chronometers
By the end of the 19th century, the Swiss watch industry produced millions of watches. Each year, an infinitesimal part of them are especially manufactured and adjusted to be presented to the annual chronometrical contests of the observatories of Geneva or Neuchâtel.
With the improvement of production techniques, the observatory regularly reinforces the rules of the contest; this competition becomes, every year, always more difficult. On the very small quantity of watches subjected to the rigorous and impartial control of the observatories, a good part is rejected; only the best pieces remain in the running.
Winning a Bulletin de marche – especially one of “First Class” – allows watch manufacturers to prove their chronometry skills. The same applies to the distinctions obtained at industrial or artistic exhibitions, whether at regional, national or universal level. At a time when marketing and advertising do not exist, this is the only real way to promote a company to the public and potential customers.
--

Dessay, Albert
Pervenchères, Orne, September 19, 1904 - Besançon, Doubs, January 20, 2003
Albert Dessay was trained at the Ecole Nationale d’Horlogerie (National School of Horology) in Besançon (founded in 1862 and nicknamed l’Horlo) from which he graduated top (Major) of his class in 1930.
He worked for various watchmaking manufactures in Besançon, notably Lip (rue des Chalets) and L. Leroy & Cie (square Saint-Amour). As a precision timer (régleur de précision), his work was rewarded with numerous prizes and medals.
He then became a professor at the National School of Horology in Besançon, then an engineer at the CETEHOR (Centre Technique de l’Industrie Horlogère / Technical Centre for the Horological Industry) in Besançon.

In 1956 and 1957, he organised a series of conferences which he gave in the French watchmaking centres (Annemasse, Besançon, Morteau, Paris and Villers-le-Lac).
As a columnist for the France Horlogère, he also wrote several articles on watch setting published in the Annales Françaises de Chronométrie in Besançon (19 vol., 1931-1965):
· “Les apports de la technique horlogère à la perfection de la mesure du temps” (The contribution of horological technology to the perfection of time measurement; January 1955)
· “Isochronisme et réglage aux positions” (Isochronism and adjustment to positions)
· “Résultats partiels sur des essais d’huilage de montres” (Partial results of oiling tests on watches)
· “Influence de quelques huiles sur la marche des montres” (Influence of some oils on the running of watches)
· “A propos de la virole du spiral” (About the spiral ferrule)
His professional archives are now kept in the Musée du Temps in Besançon (Palais Granvelle).
Albert Dessay must be considered as one of the most important watchmakers of his time, and later as a theoretician of watchmaking.