The watch of Augustin Branicki (1854-1905), son of Count François-Xavier Branicki de Korczak (1816-1879) 18K yellow gold, open-face, keyless-winding, round-shaped, pocket with, subsidiary seconds at 6 and nine horological complications: â?¢ Minute-repeater on two steel gongs (activated by the slide at 3 o'clock) â?¢ Dead independent seconds (exterior graduation with central hand; activated by the push-piece located on the winding-crown) â?¢ 1/5 of second, known as foudroyante seconds (subsidiary dial at 6 o'clock) â?¢ Split-seconds, known as dédoublante (second concentric central hand; activated by the push-piece located on the winding-crown) â?¢ Two barrels with differential gears and bidirectional-winding inspired by Sylvain Mairet's (1805-1890) works (1850 / 1855) â?¢ Date of the month (subsidiary dial at 3 o'clock) â?¢ Day of the week (subsidiary dial at 9 o'clock; indications given in French) â?¢ Age and phases of the moon (subsidiary dial, graduated from 0 to 29 1/2, and aperture at 12 o'clock) â?¢ Hours and minutes of a second meridian, known as double tour d'heures (subsidiary dial at 9 o'clock, time-setting by push-pin on the left side of the pendant) â?¢ Metallic thermometer according to the Reaumur scale (halfcircle graduation at 12 o'clock; not considered as a horological complication) Case-back polychrome enamelled with the coat-of-arms of Count Augustin (Augustyn) Branicki (1854-1905), naturel son recognized of François-Xavier Branicki de Korczak (Franciszek Ksawery Branicki; 1816-1879), landlord, political writer, financier and patron. 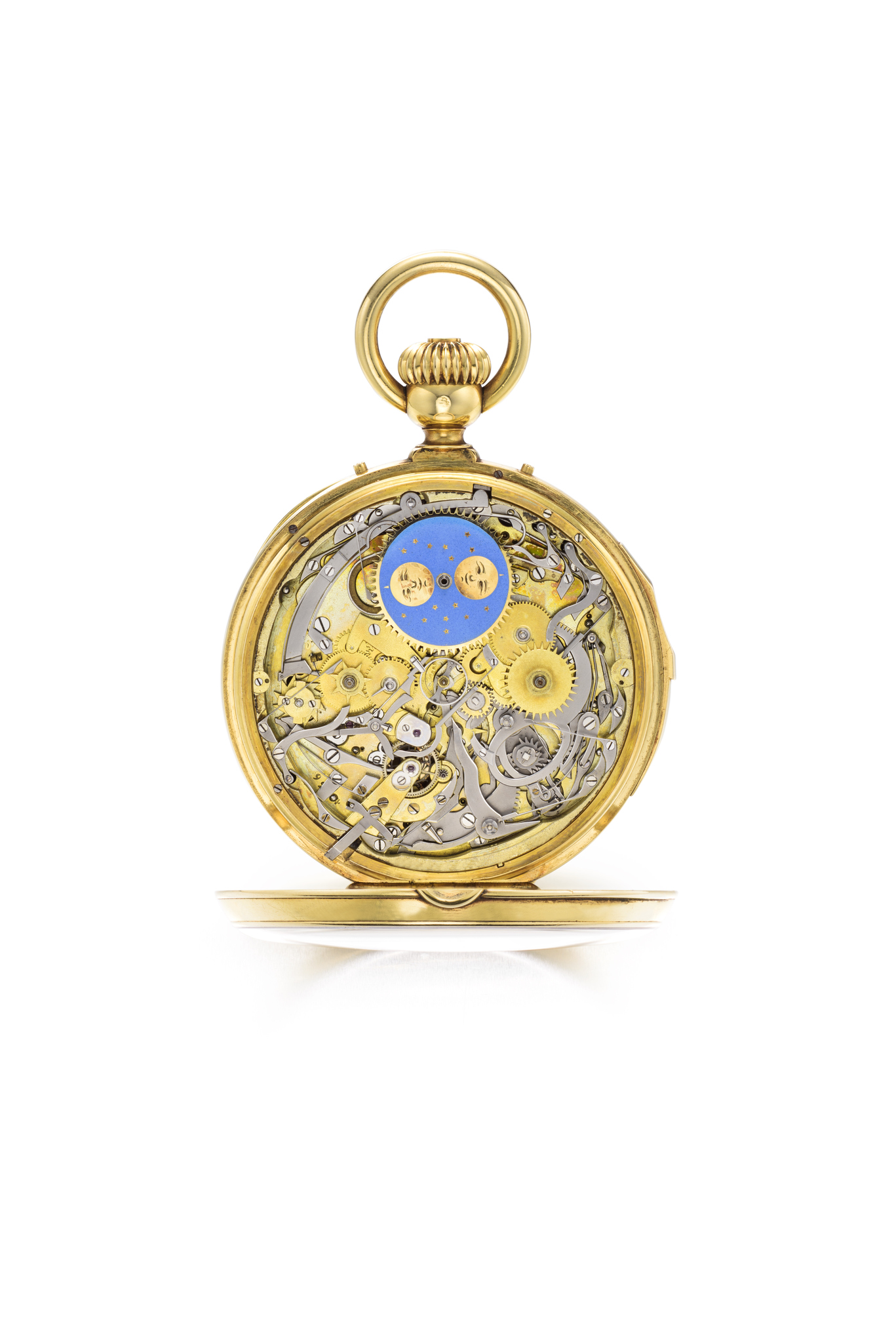 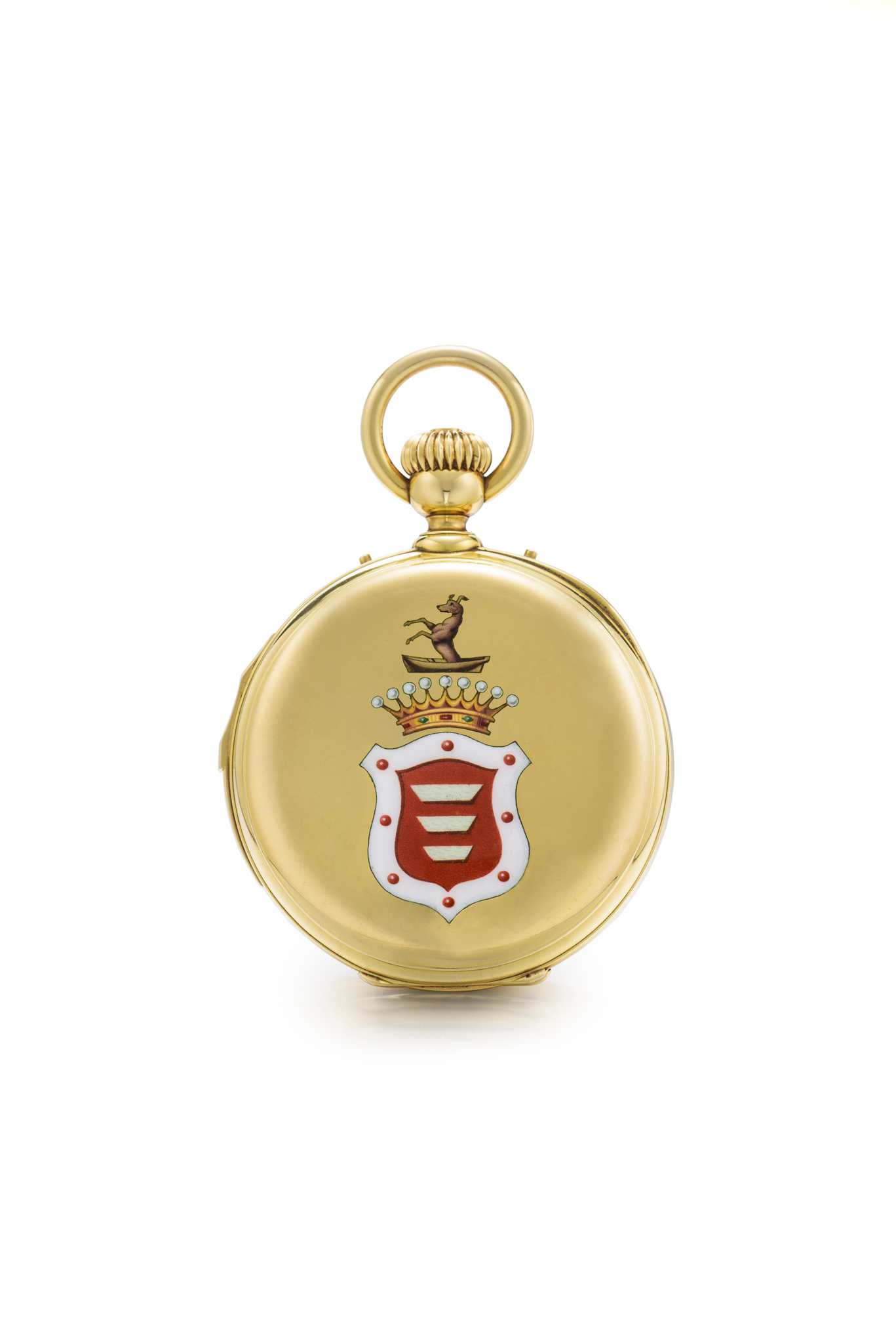 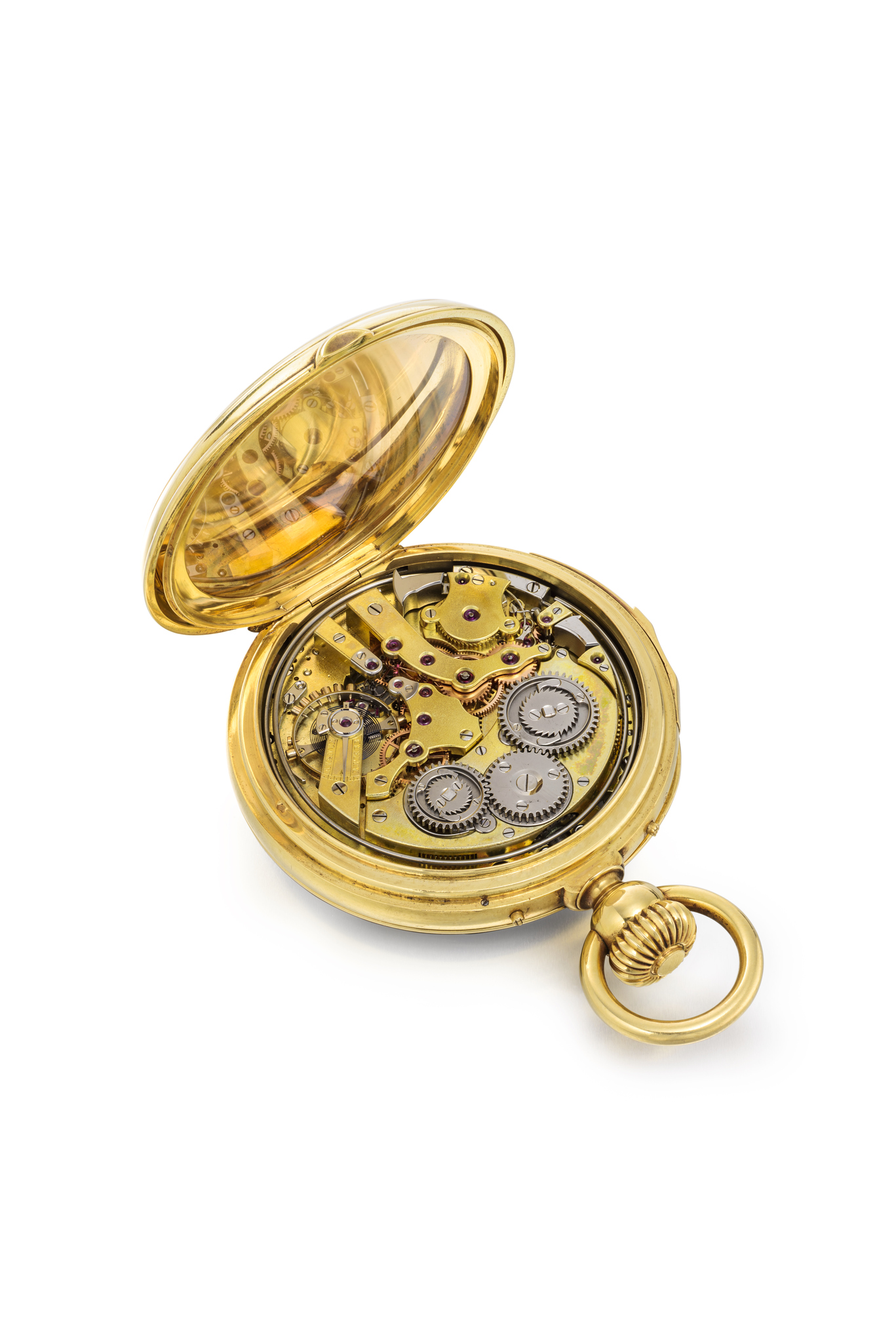 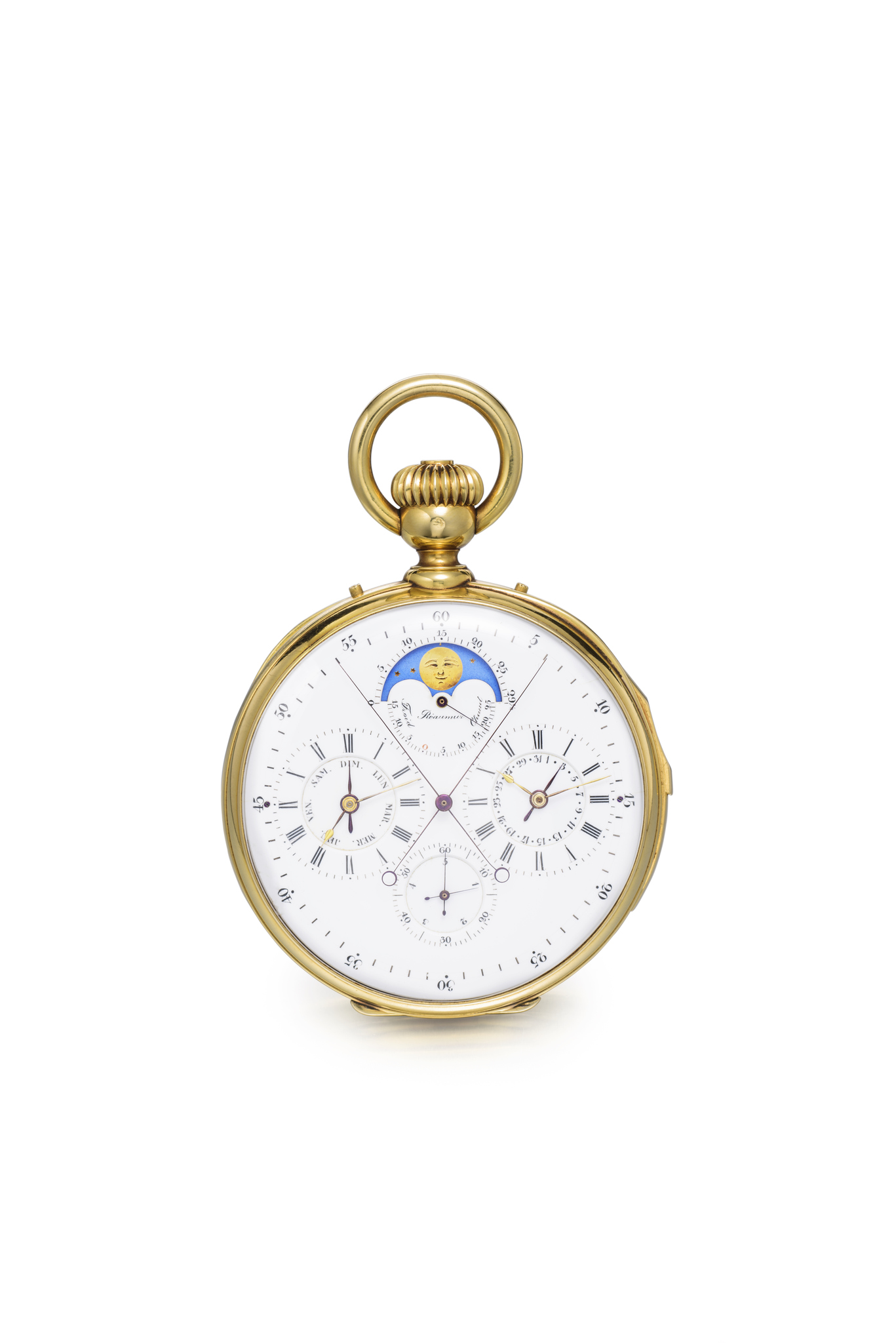 The quality of execution of this timepiece and its serial number, as well as similar models, allow us to attribute it to the Louis Audemars House from Le Brassus, Vallée de Joux. It should be noted, however, that the production sheets of the watch No. 9 294 are unfortunately no longer present in the Historical Archives of the Louis Audemars House, now kept by Mr. Paul Audemars in England. The present watch is similar to the Louis Audemars No. 10 517, illustrated and described in Zantke, Hartmut, Louis-Benjamin Audemars, His Life and Work (2003, pp. 262-263). This latter (No. 10 517) was sold by Antiquorum, Geneva, auction, April 24, 2004, lot 159, for the amount of CHF 146 500.- Another Louis Audemars’ watch is fitted with the same type of horological complications, the No. 11 820, but with the addition of a perpetual calendar. This watch was also retailed by the house Leroy ?? L. Leroy & Cie, Paris, No. 58 515 ?? and presented in 1920 by King Alphonse XII of Spain (1886-1941), to Count Vicente Santamaria de Paredes (1853-1924). This latter (No. 11 820) was sold by Antiquorum, Geneva, auction, May 10, 2015, lot 159, for the amount of CHF 351 750.- Another watch of this type is known, retailed by Charles Oudin, Paris, No. 32 440, with the indication of the moon but without thermometer. This latter was sold by Antiquorum, Geneva, auction, October 21, 1995, lot 572. This kind of watch is at the time of their creation recorded in the archives of the house Louis Audemars in the register of "Montres supérieures” (Superior watches). Examining this watch one cannot help admiring the ingenuity and variety of the design, as well as the attention paid to the details. The finish of the escapement, with its equidistant pallets and the undercut of the escape wheel to make it lighter but still stable; the polish of the steel, the arrangement of the cadrature (the work under the dial), are on a par with the best horological work done. The dédoublante of the split-seconds dead independent seconds is operated by a single push-piece in the crown. The first push brings both “chronograph” hands together and starts the dead seconds with both hands. The second push stops one of the hands, the third push stops the split-seconds hand. Branicki de Korczak, François-Xavier (in Polish, Franciszek Ksawery Branicki) Warsaw, Poland, October 26, 1816 ?? Assiut, Khedivate of Egypt, November 20, 1879 Count Xavier Branicki was a Polish nobleman, political exile and landowner who took French nationality. He became a political writer, financier, art collector and philanthropist. He was the owner and restorer of the Château de Montrésor and estate (Touraine) in France. He was descended from a powerful magnate family with immense land holdings in the Duchy of Lithuania and in Ukraine, partly as a result, it is said, of a family connection with Catherine the Great. He was a member of the close circle of Napoléon III. He was a cofounder of the Crédit Foncier de France, a bank that continues to this day. He marries Pélagie (Pelagia) Cécile Eve Zamoyska but remains without legitimate descent; However, he has several natural children, including Augustin (Xavier Vadislas Constantin Augustyn; Paris, April 19, 1853 ?? 1905), son of Sydonia Szumla?ska Revitiski, who has been acknowledged by his father but will not have good relations with him. He will be a diplomat, spouses in 1876 Anna Stolypin, publish various things (Les Griffes du chat, Paris, 1900) and wrote in Bonapartist newspapers. Xavier Branicki is in his time, one of the richest men in France. Following an accidental death during a cruise in Egypt, without legitimate posterity, his nephew Ksawery Wladyslaw inherited his fortune and Montrésor Castle. Bibliography Skorha, Line, “Un magnat polonais en Touraine, Xavier Branicki (1816-1879)”, in Bulletin de la Société Archéologique de Touraine, T. XXXIX, 1980, pp. 555-569.