18K yellow gold, half hunting-case, keyless-winding, round-shaped, pocket watch, hinged case-back and cover, subsidiary seconds at 8, and five horological complications: Instantaneous perpetual calendar, Retrograde (fly-back) date of the month (half-circle graduation at 12 o'clock), Day of the week (aperture at 12 o'clock; indications given in French), Month of the year (subsidiary dial at 4 o'clock; indications given in French), Phases of the moon (aperture at 6 o'clock). Case-back engraved in taille-douce with the cypher "E C". 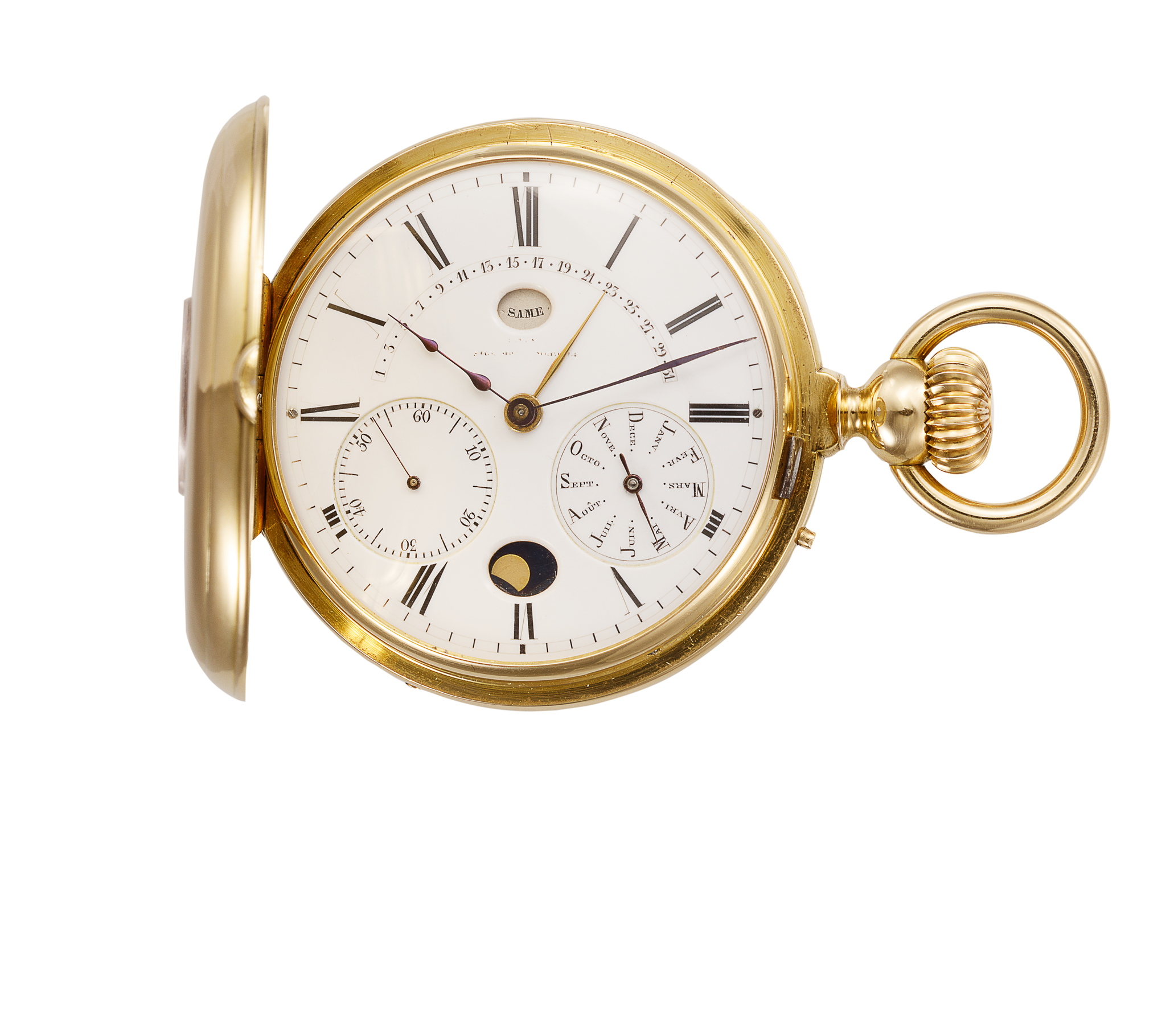 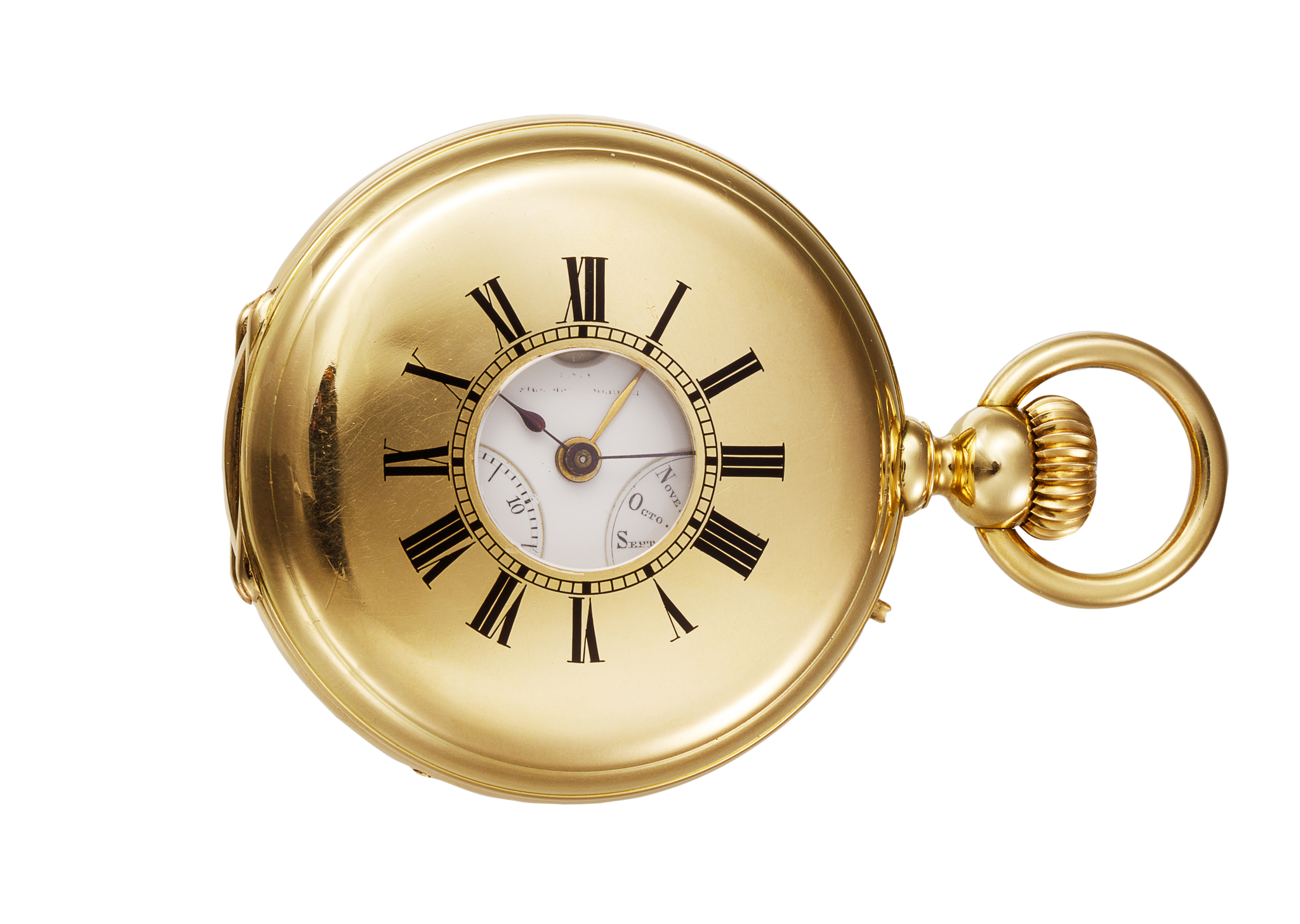 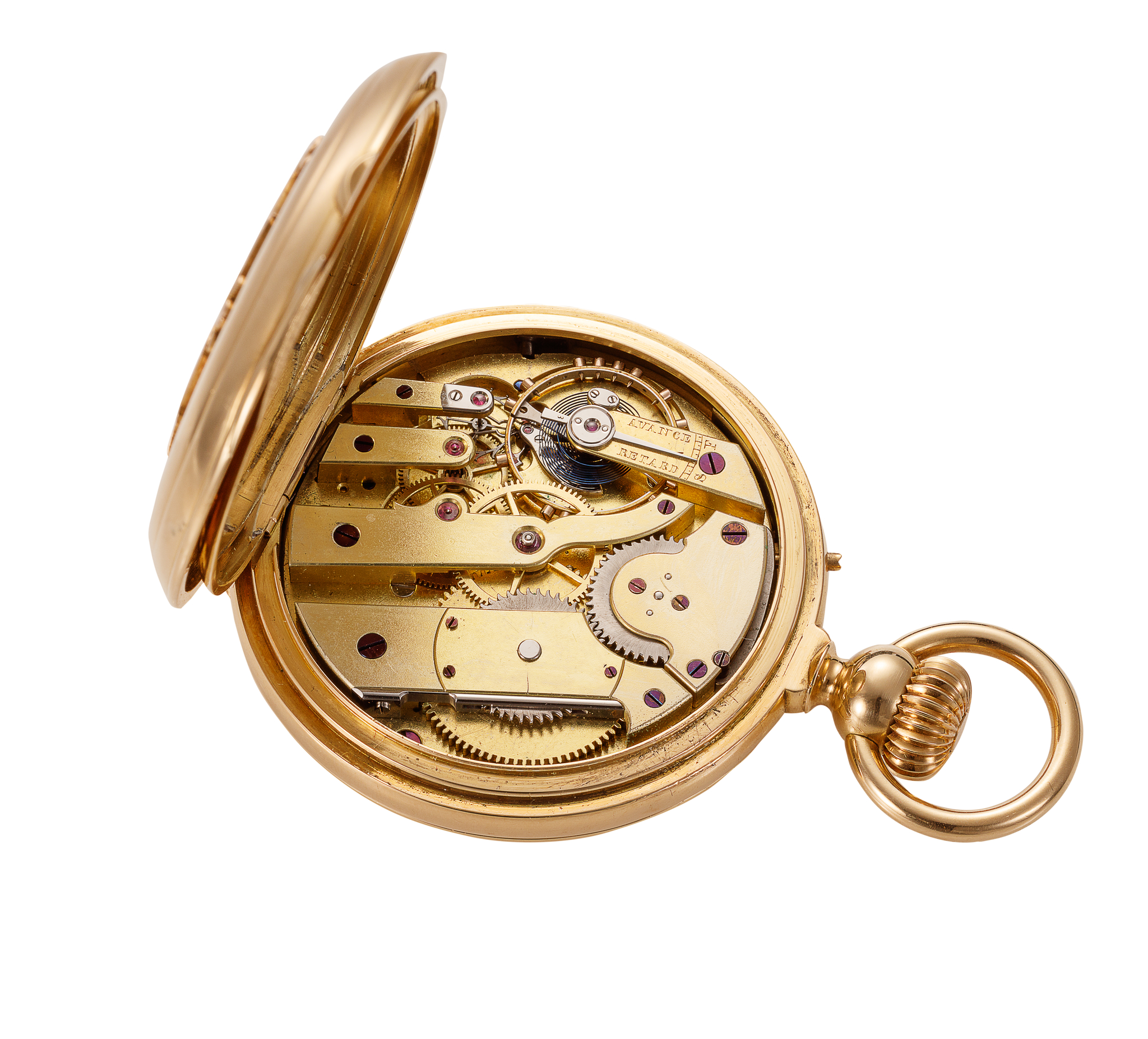 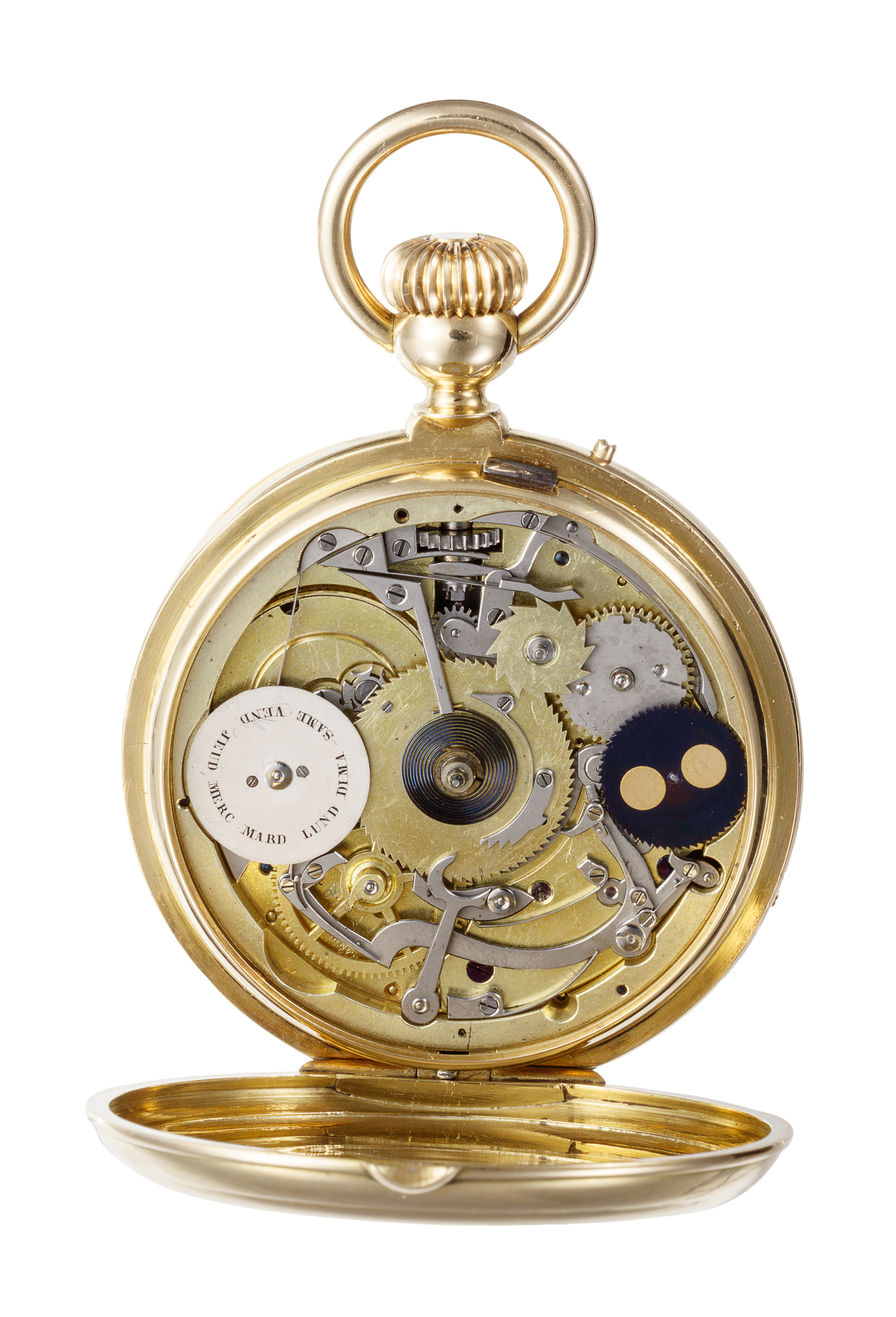 Signature cuvette signed by the retailer

Provenance Antiquorum, Geneva, April 10, 1994, lot 81, for the amount of CHF 20 700. Retrograde perpetual calendar Watches with perpetual calendars and fly-back indication of the date, so-called "retrograde", were produced in very few examples in the 1860-1880's by some Genevan workshops, including those of Eugène Lecoultre (1819-1882), Henri-Robert Ekegrèn (1823-1896) and Patek, Philippe & Cie. Note that at this time, other watchmakers in the Vallée de Joux produce a few rare pieces with this same horological complication. The Breguet House of Paris on order at Louis Audemars & Cie, Le Brassus (an example made for the Islamic market, No. 5 473 / No. 1 434, was sold by Antiquorum, Geneva, November 13, 2005, lot 71, for the amount of CHF 20 700.-). Eugène Lecoultre is most likely the author of this watch, whose the main-plate is punched "geneve". Lecoultre, Eugène (1819-1882) Eugène-Constant Lecoultre (originally from Le Chenit, Vallée de Joux) married in 1842, in Geneva, Louise-Jacqueline-Simone Soldano (1820-1858), precision timekeeper adjuster; the couple has three children. He spouse, in second weddings, in 1861, Eglantine Cellier (1838-1924); the couple has 14 children, at least six of whom arrive in adulthood. He seems to open his worshop in Geneva in 1848. He manufactures watches with horological compliAcations, very neat, including those with a retrograde perpetual calendar that seems to his invention. He also looks after the precision adjustment of watches. In 1880, he won a First prize at the timing contest of the Geneva Astronomical Observatory (for a Chronometer with lever escapement, Breguet hairspring, set by himself, No. 2 370, with 192.3 points). He is mentioned in Geneva as a manufacturer, adjuster and watchmaker-merchant (in 1848, 1857, 1862, 1874, etc.), under the trade-names Lecoultre-Soldano, Lecoultre-Cellier, and Lecoultre & Cie. He was located in Geneva, 8, rue François Bonivard, at the foot of the Saint-Gervais district, on the right bank of Lake Geneva. A watch with minute-repeater, chronograph and retrograde perpetual calendar, signed by him, was sold by Antiquorum, Geneva, April 18, 1998, lot 561, for the amount of CHF 35 650.- His eldest son (from the first marriage), Marius Lecoultre (1847-1915) works with him and takes over the paternal affair; it is to him that we owe the invention of watches known as "Boules de Genève". Note that the relationship between Eugène-Constant Lecoultre (1819-1882) of Geneva and CharAles-Antoine LeCoultre (1803-1881) of the Vallée de Joux - founder of what is today the the Jaeger-LeACoultre manufacture on Le Sentier - dates back to eight generations, with the "honorable" Pierre (I) Le Coultre (circa 1532 - circa 1602).