18K yellow gold, open face, key-winding, round-shaped, pocket watch with gold guilloché engine-turned dial and three horological complications: Quarter-repeater on two steel square gongs (activated by pulling the pendant after pressing the button at 1.30), Date of the month (subsidiary dial at 12 o'clock), Day of the week with zodiacal correspondence (subsidiary dial at 6 o'clock; indications given in French) Case-back engraved in taille-douce with the coat-of-arms of Félix Baciocchi (1792-1841), French military, Prince of Lucca and Piombino (1805-1814), Grand Duke of Tuscany (1809-1814), and brother-in-law of Napoléon Bonaparte (1769-1821), French statesman and military leader, Emperor of the French (1804-1814 and 1815). 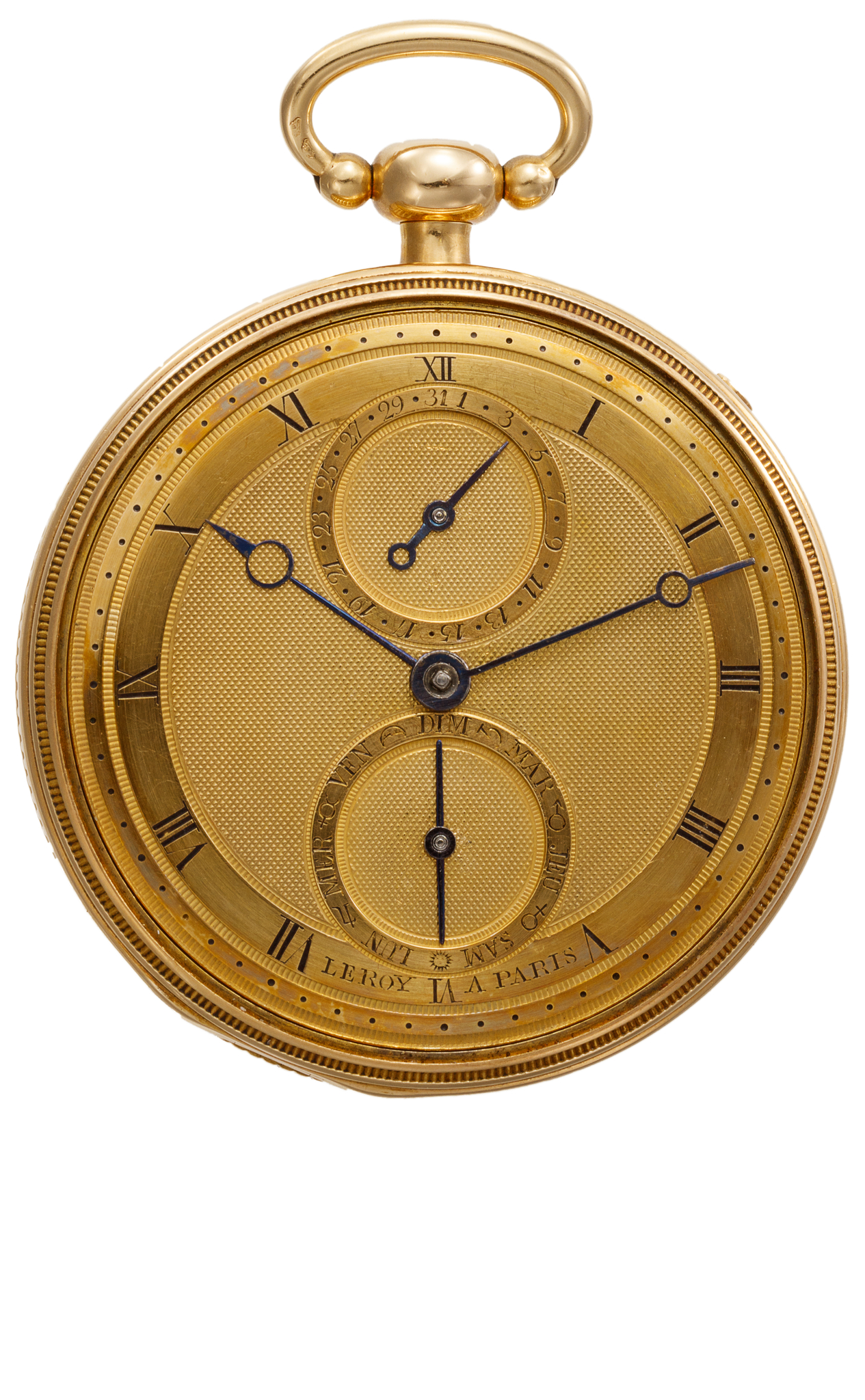 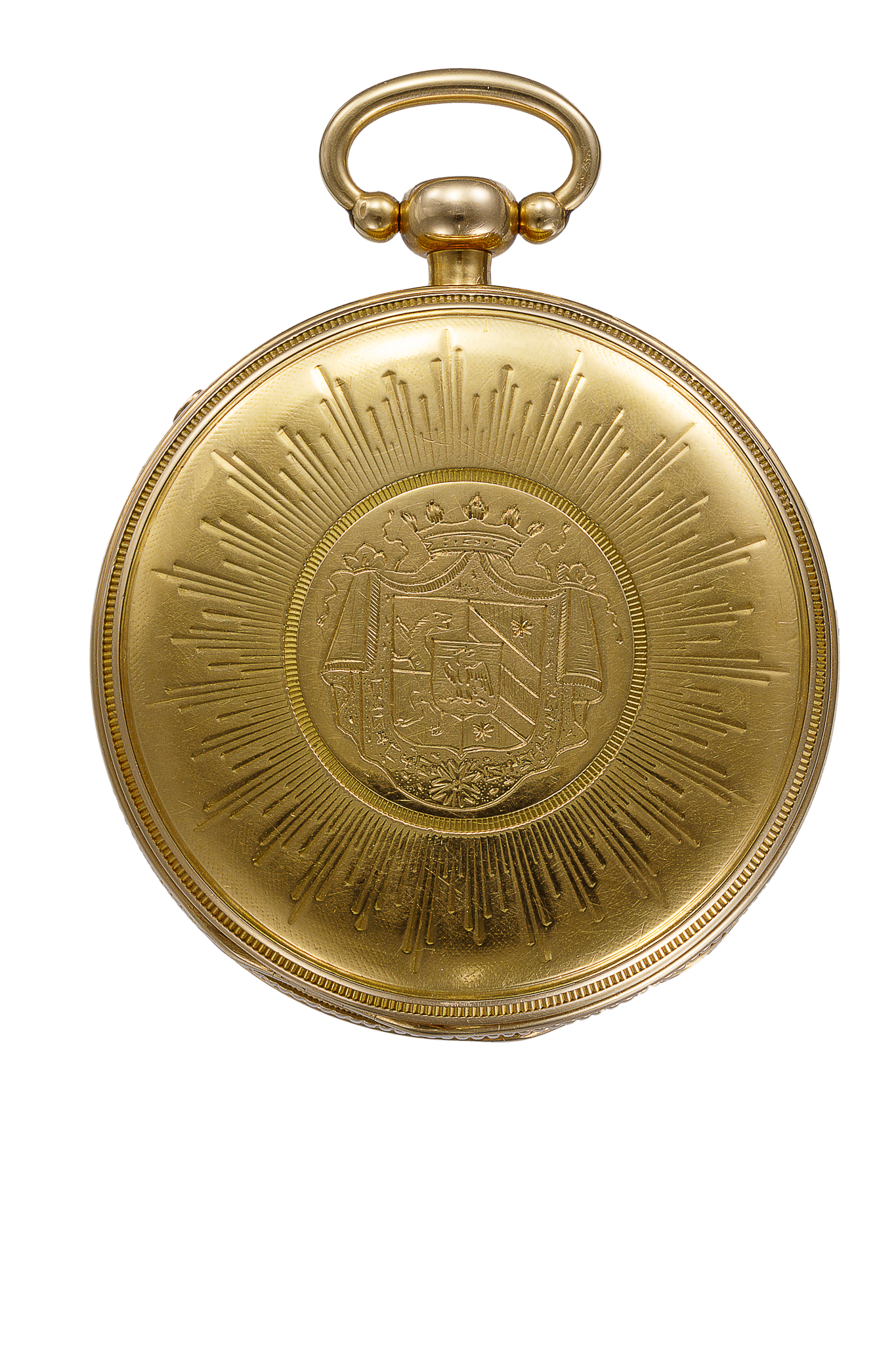 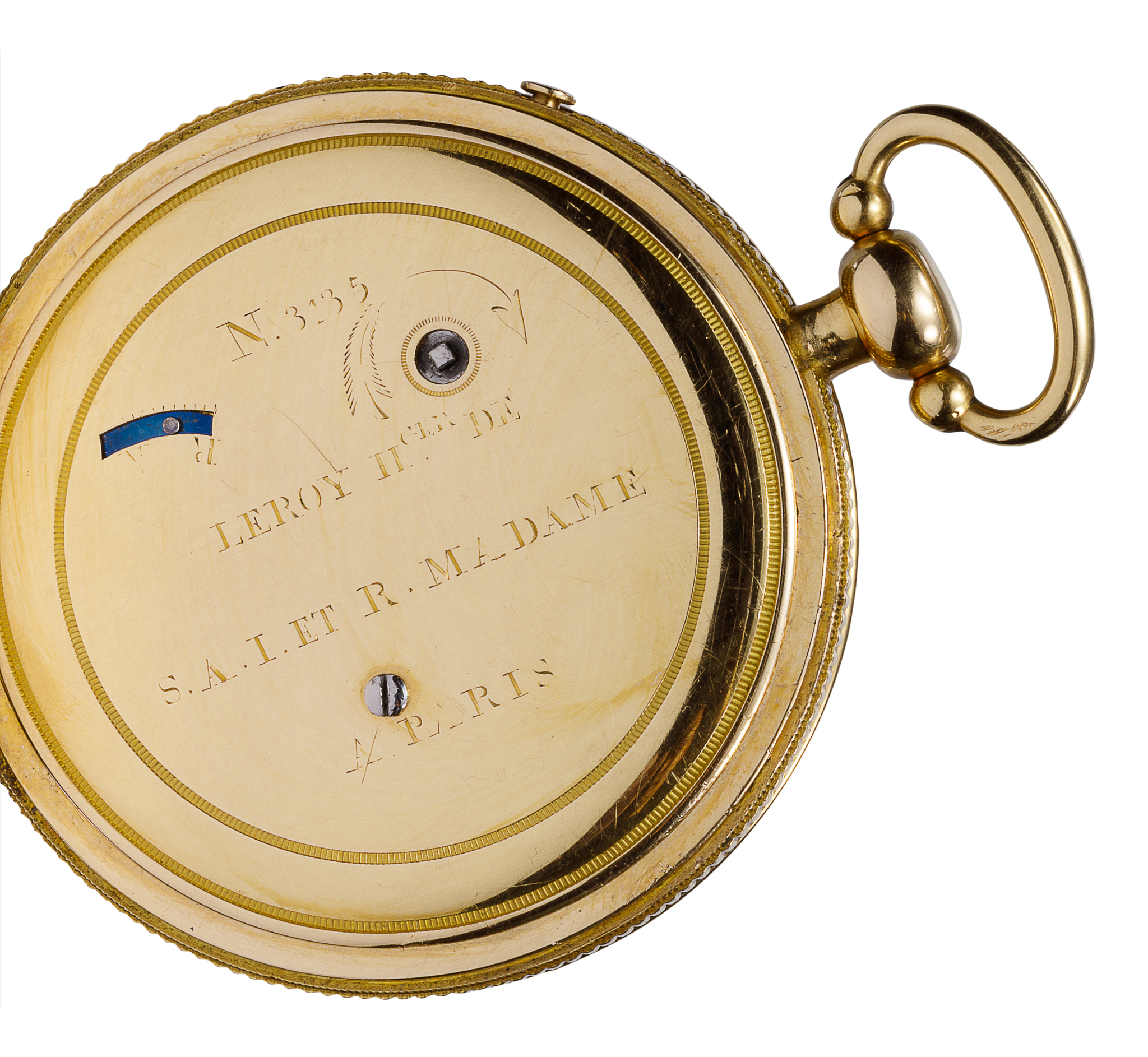 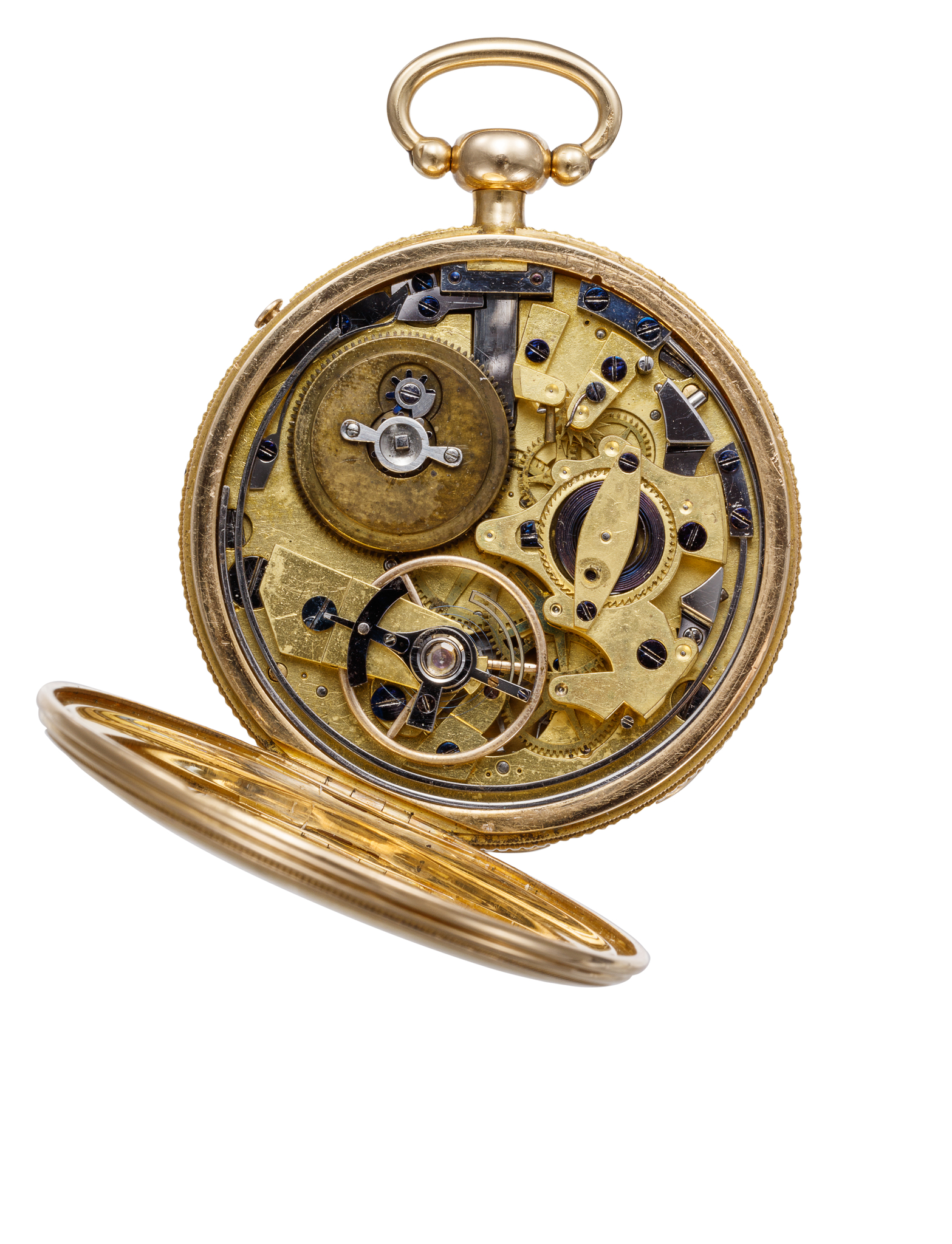 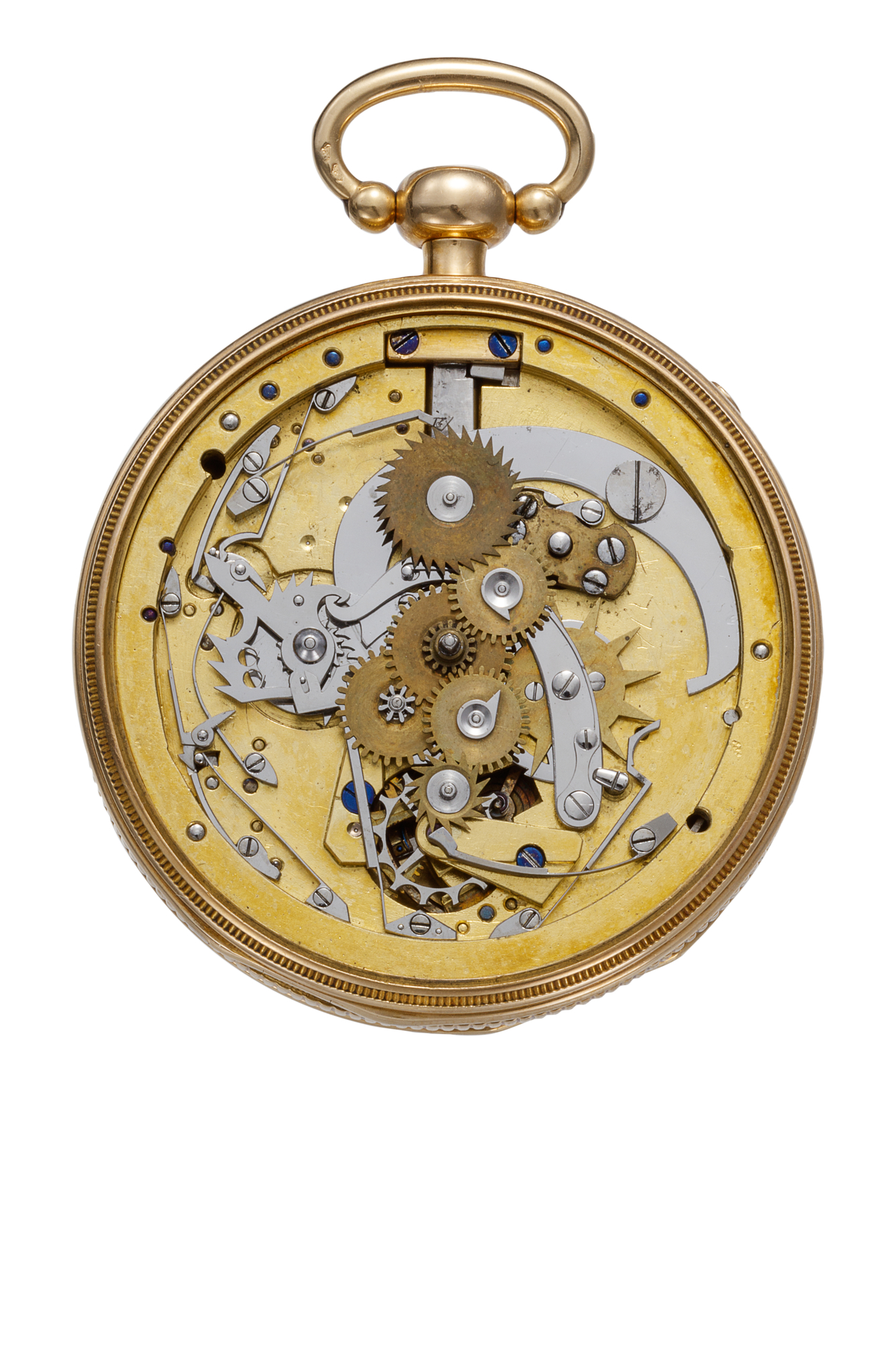 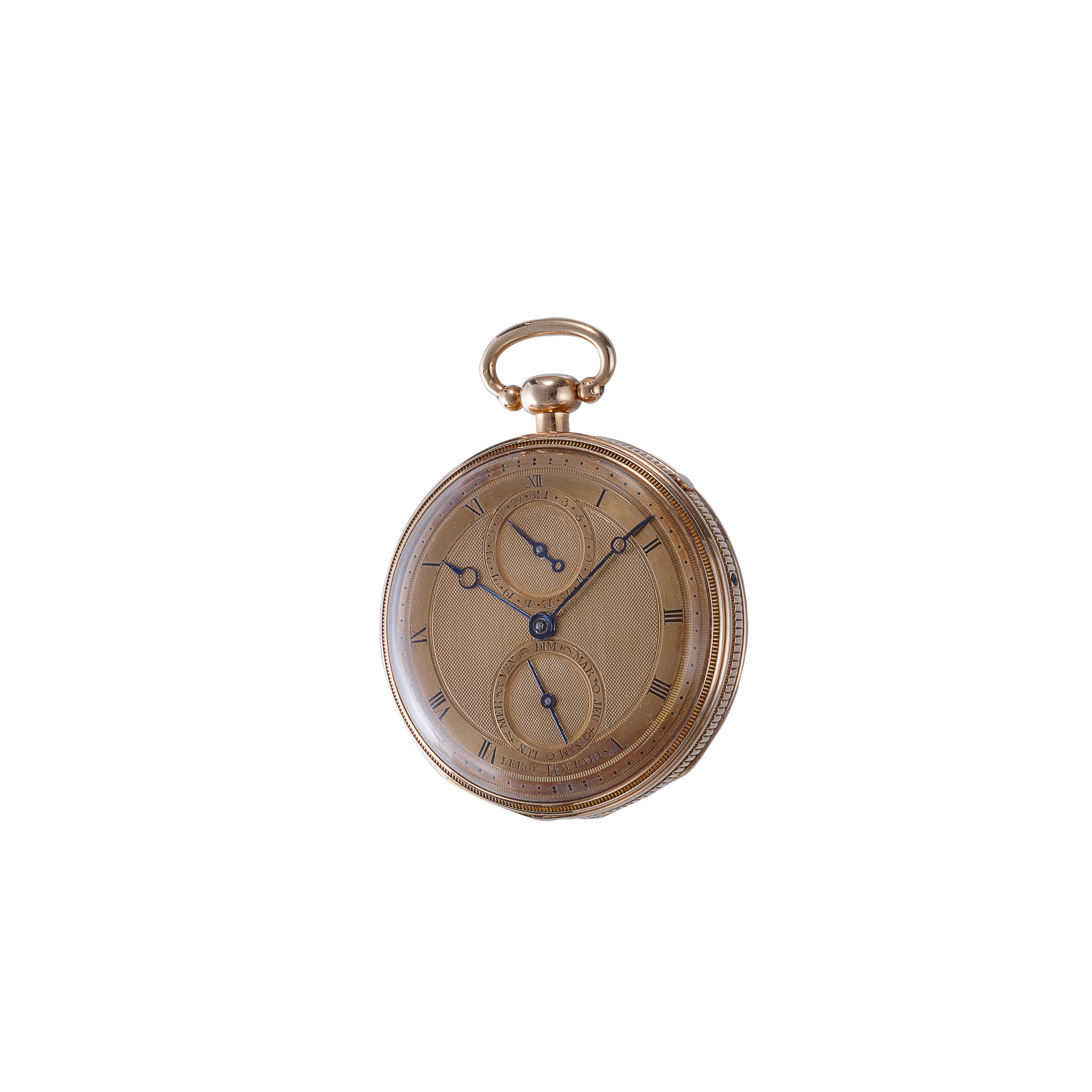 Maria Anna (Marie-Anne) Elisa Bonaparte Ajaccio, Corsica, January 3, 1777 - Trieste, Austrian Empire, August 7, 1820 She was an Italian ruler, Princessefrançaise, Princess of Lucca and Piombino (1805-1814), Grand Duchess of Tuscany (1809-1814) and Countess of Compignano by appointment of her brother Napoléon. As Princess of Lucca and Piombino, then Grand Duchess of Tuscany, she became Napoléon's only sister to possess political power. Their relations were sometimes strained due to her sharp tongue. Highly interested in the arts, particularly the theatre, she encouraged them in the territories over which she ruled. Felice Pasquale (Félix) Baciocchi (who later adopted the surname Levoy) Ajaccio, Corsica, May 18, 1762 - Bologna, Italy, April 28, 1841 He was born into a noble, but poor, Corsican family. He was second lieutenant in the French army in 1778, lieutenant in 1788, then Captain in 1794. On May 1st, 1797, he married Elisa Bonaparte (1777-1820), Napoléon's younger sister, in Marseille (France). Baciocchi was then promoted from colonel, to Brigadier General, then to Major General in 1809. He was also made a Senator in 1804 and Imperial Prince in 1805. Thanks to Napoléon's conquests, Baciocchi became Prince of Lucca and Piombino, then Grand Duke of Tuscany, but without the associated power, which really was exercised by his wife. He also serenely endured her infidelities. When Napoléon's empire collapsed, he retired with Elisa to Trieste, then to Bologna after her death in 1820. Le Roy, Charles (1765-1839), Paris Basile-Charles Le Roy (1765-1839), founder of the Le Roy company in 1785 in Paris (13-15 Galerie Montpensier, Palais-Royal), was appointed (circa 1805-1810) ''Horloger de S.A.I. et R. Madame'' (Clockmaker of His Imperial and Royal Highness Madame) Lætitia Bonaparte (1750-1836), mother of the Emperor of France. From an aesthetic and technical point of view, this watch can be compared to the best productions of Abraham-Louis Breguet (1747-1823) of the time.