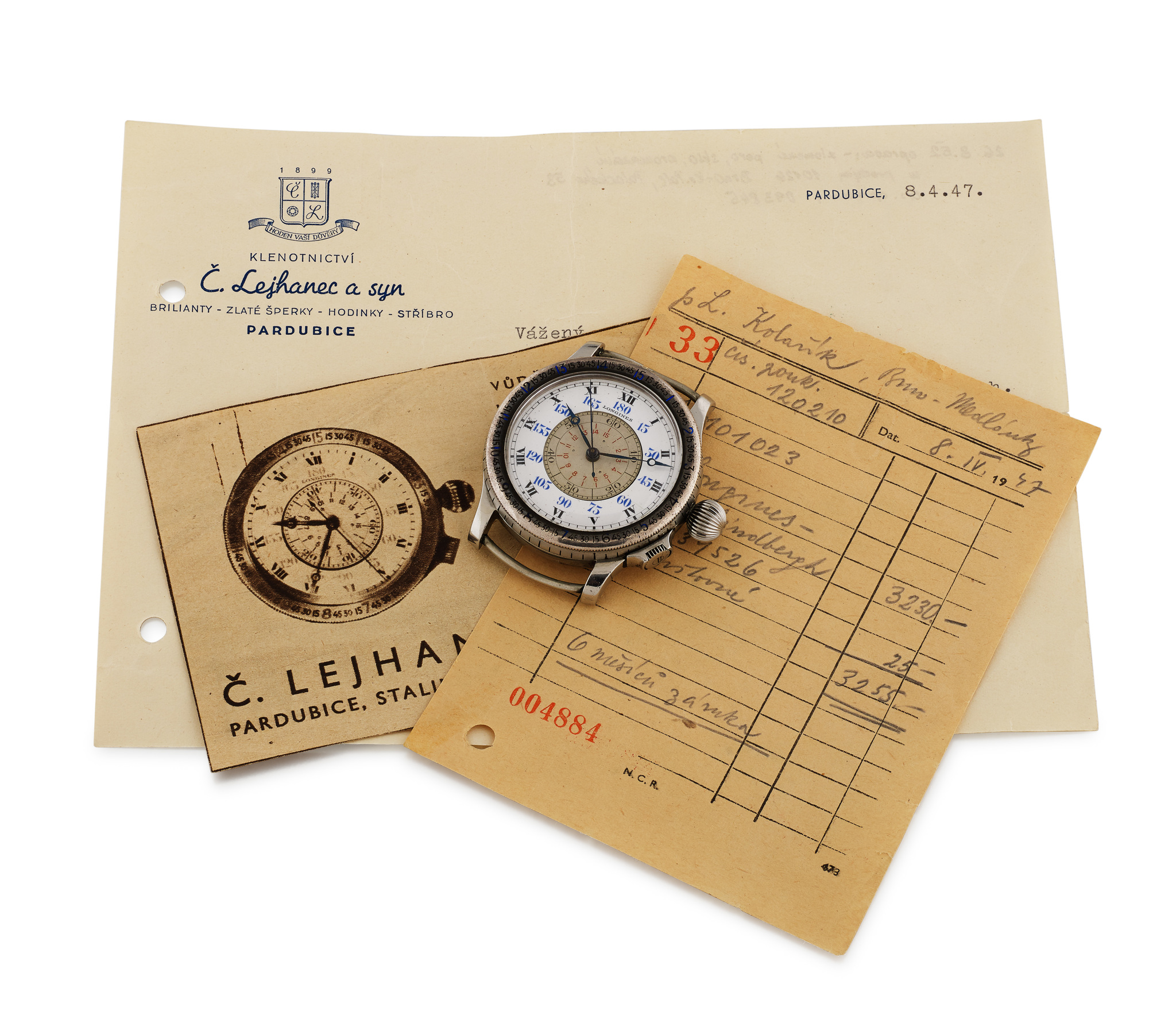 According to the papers accompanied this lot, dated April 8, 1947, the watch was delivered to the Longines agent, C. Lejhanec a Syn, Pardubice, Czechoslovakia.
--
Longines “Hour-Angle” watch
The “Hour-Angle” system was invented by Philip Van Horn Weems (1889-1979) of the Annapolis Naval Academy, an authority in the 1920’s and 1930’s. He trained the famous Charles A. Lindbergh (1902-1974), who set the record for the first non-stop transoceanic flight.
The watch, as a navigational instrument for airplane pilots, is used in conjunction with a sextant and the appropriate nautical tables, to permits the rapid computation of the Greenwich hour angle, that is, the aircraft’s longitude.
The large ball-shaped winding-crown enables the watch to be wound by a pilot wearing gloves. It is practically impossible to build a commercial timepiece which will keep time to the exact second under the conditions met in a ship or in an aeroplane. The inevitable variation from true time necessitated an extra calculation in navigation to compensate for this chronometer error.
Weems noted that in an airplane moving at speeds of 200 to 300 miles an hour or more, the time required for calculating chronometer error was a danger that should be eliminated.
Since the high gear ratio made it impractical to set the second hand to the dial, Weems chose to set the dial to the hands. The seconds dial in the centre of the watch is rotated by turning a crown or by depressing the small stem on other models. For navigational purposes, Greenwich Mean time is indicated directly.
This model of watch was worn by Charles A. Lindbergh at Le Bourget Airport, near Paris, the airfield where he landed after opening on May 20-21, 1927, the Atlantic to aviation with his historic solo flight from New York.
The Longines Weems watch is made in two models. The smaller model is useful not only for sea navigators and aircraft pilots, but particularly radio broadcasters as well as others, such as civil engineers who require exact time.
Philip V. H. Weems is the holder of many patents of invention filed in the USA, including No. 2 008 734, dated July 23, 1935, where we find the idea of the rotating bezel (among many other technical inventions in this very complex patent).