C. White marble base applied with a gilt bronze frieze featuring astronomer putties. The movement is supported by two gilt columns and flanked by two pyramids, each topped by a globe and by an armilary sphere and decorated by painted representations of the four seasons, below gilt bronze flower garlands, and applied above with white enamel plaques inscribed with the tables of sunrise and sunset for the 12 Gregorian months with pointers designed as gilt flies. A gilt bronze astronomer Cupid is seated on books between the pyramids and the Chariot of the sun at the top, flanked by allegorical figures of the Dawn and the Night. D. White enamel chapter ring with Breguet numerals and outer minute and seconds ring. Gilt brass "serpent" hands. World-time revolving dial above, giving day and night hours, for 53 cities. Subsidiary dials below, for the dates, the months with the signs of the zodiac, the days of the week with indication of their planets. On the base of each pyramid, phases and age of the moon representation on the left, sunrise and sunset on the right, shown by means of the double mobile horizon. M. Fully skeletonised with going barrels both for the going and the striking trains, Trapezoidal brass frame, pin-wheel escapement, half-second beating, gridiron compensation pendulum with spring suspension. All calendar and astronomical indication are driven by the striking train. Musical mahogany base supported by two lying lions and two large gilt paws, Musical movement: 23 cm. pin-cylinder with fly regulator and a comb of 20 groups of 4 teeth, playing 6 tunes at wilt 1 - Duo de Morse 2 - Point de promesse du maeon, 3 - Valse du Barbier de Seville 4 - Isabelle 5 - Coeur des montagnards 6 - Valse de Robin des Bois Diam. 58 mm. Diam. 77 x 60 x 24 cm. 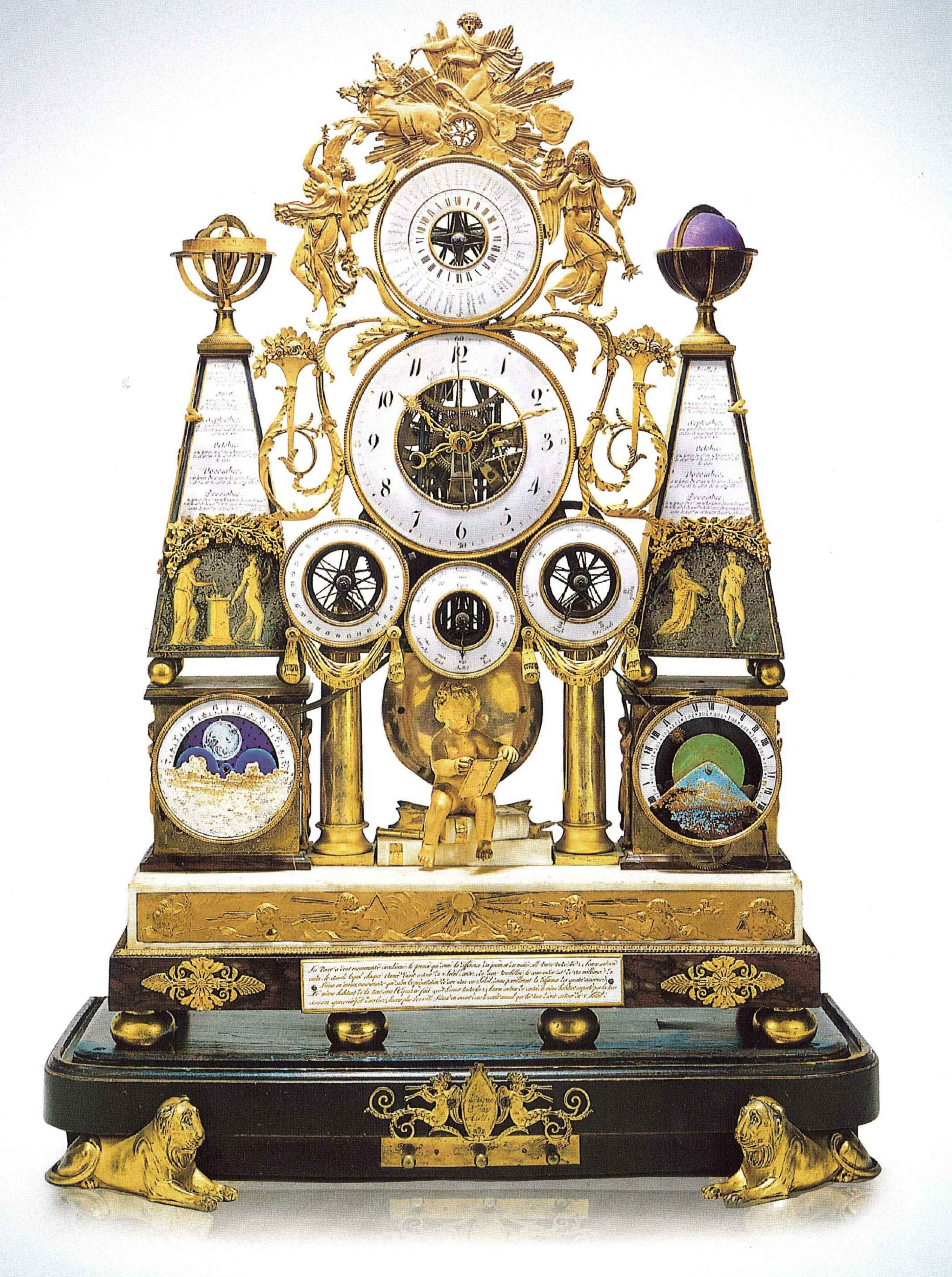 This extraordinary clock is described and illustrated in Tartly. 1.a. PendadcFraacaisI', 2nd part, 5th edition, page 382. Accompanied by the original instuctiou leaflet, published in 1812, giving of this clock a detailed description of all its functions and of its decoration. Several details in the decoration and the choice of the musical tunes, enable to think this clock was made either by, or for a freemason