Piguet Meylan and Frederic Rochat, Geneve, No. 581, music attributed to Nicole Freres No. 634, completed circa 1828. Very fine and extremely rare, bronzed and ormolu, hour and half hour striking, musical clock with singing bird and automata.

C. Designed as Medicis vase, the movement set in the bronzed body, with foliate gilt bronze bezel, applied ribbons and acanthus decoration, "eggs and dots" on the collar border, musical movement in the oval mahogany veneered base with glass dome protection. Automaton scene with multi-coloured feathered bird with moving, body, wings, tail, opening beak and turning head, perched on the fountain and flanked by realistic compositions of potted flowers and foliage, on the foreground, a boy and a girl, perched on a gilt see-saw, are playing with a paper-kite. D. White enamel with Roman numerals. Blued steel Breguet hands. M. Brass circular, mouvement de Paris type by Honore Pons (Paris) No. 1089, with going barrel both for the going and the striking trains, anchor escapement, short pendulum with silk suspension. Striking on a bell with count wheel on the back plate. Brass full plate singing bird and automaton movement with fusee and chain, stacked cams, fly regulator and shaped bellow for the bird, the three twisted glass rods of the fountains driven by a right angle gearing and the see-saw by means of a cam and levers. Musical movement of three different tunes in the base with going barrel, fly regulator, 23.5 cm. pin-cylinder with comb of 32 groups of four teeth and one of five. Signed Meylan and Frederic Rochat, Geneve, No. 581 on the singing bird and automaton movement, Pons' trade mark on the clock movement back plate with No. 1089. Dim. 64 x 40 x 19 cm., excluding the glass dome. Estimate: SFr. 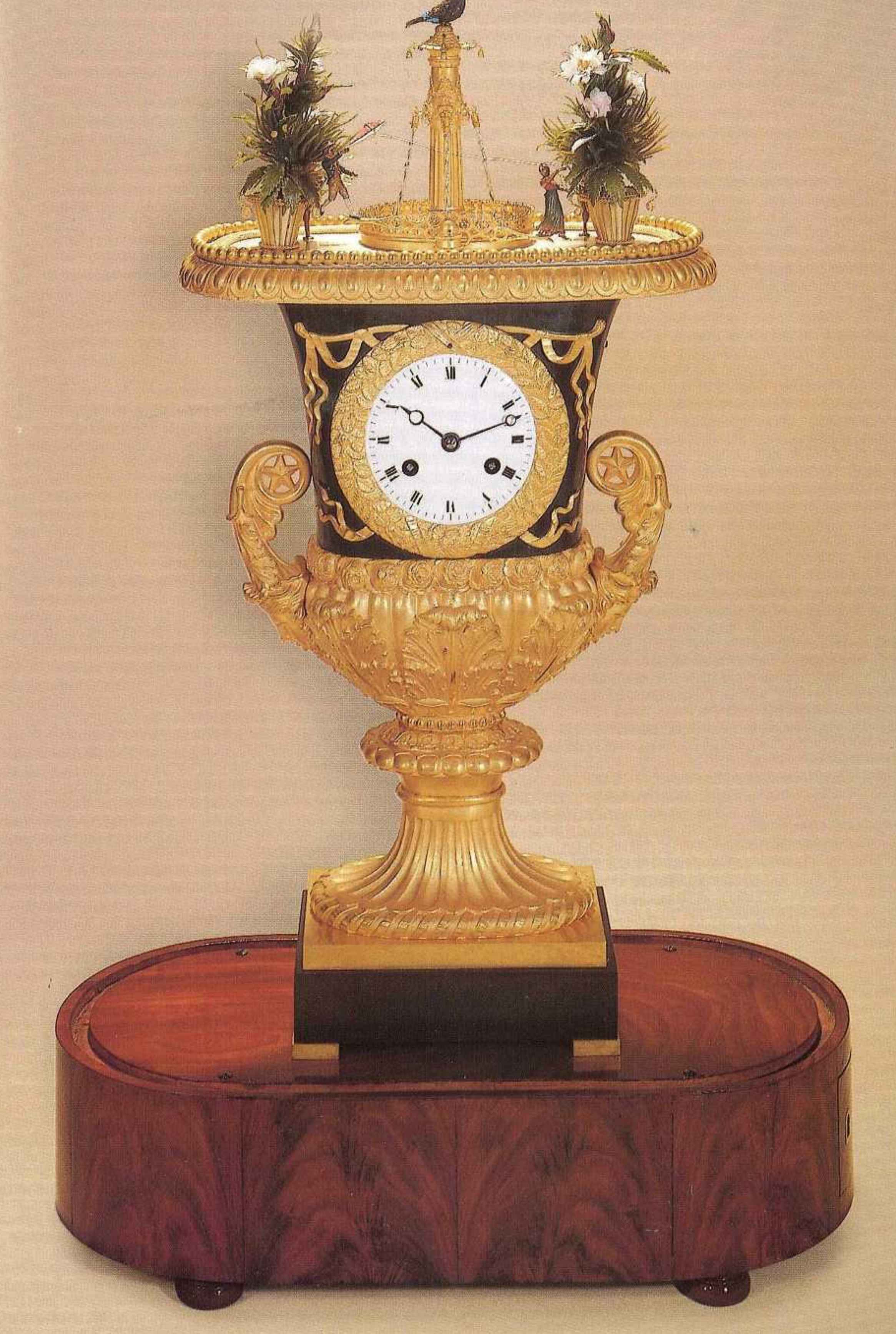 The music plays 3 minutes before the hour, then the singing bird and the automatons are activated, three minutes before the clock strikes. The mainspring of the clock is signed "Ls. Peupin", 1826, that of the of the automata: Boulet S'bre 1828., Vases with singing birds are extremely rare, three only are known to exist, including the clock offered now for sale. A very large one, by Ingold, previously in the Dugast Collection, is now in the Time Museum (Rockford Illinois), it is described and illustrated by A. Chapuis and E. Gelis in Le Monde des Automates, pages 127 to 129. The third one, now in a private collection, roughly of the same period, is signed Bautte & Moynier a Geneve, and dated 1834, our example is certainly the earliest of all, being completed circa 1828. Philippe Samuel Meylan, born February 15th, 1772 in Bas-du-Chenit, died in 1845. At 20 years old he came to Geneva where he worked for Godemar Freres as Master worker. Afterwards he went back to Brassus where he founded a little factory in 1811. He then returned to Geneva to settle down. I-Ie met there another watchmaker from his own village, Isaac Piguet, with whom he associated, founding the Piguet & Meylan Firm, which lasted from 1811 to 1828. It specialised in minute "cadratures", musical watches, skeleton or automaton watches, mechanical animals and figures. Daniel Isaac Piguet, born in Chenit in 1775, died in Geneva in 1841. Very skilful watchmaker, he associated himself a first time with Henry Capt, from 1802 to 1811, then with Samuel Philippe Meylan, another watchmaker from the same village, until 1828. Their works were signed or marked "P.M."within a lozenge. After 1828, he went on with his activities with his son, under the name of Piguet & Fils. Their creations were for a large part made for the Chinese Market. It is told that an important collector from Sidney bought a large quantity of watches and other musical and automaton objects of vertu, but the boat which carried the pieces was shipwrecked, in the middle of the Indian Ocean. Nicole Freres, makers of musical movements, wers active in Geneva from 1828 to 1835. In 1831 their workshop was at passage des Bergues, rue du Cendrier.