King Arthur and Emmeline.Ilbery, London, No. 7242, enamel signed V. Dupont. Pinx., circa 1820.Magnificent 18 ct. gold and enamel centre seconds watch with a special escapement, made for the Chinese market. 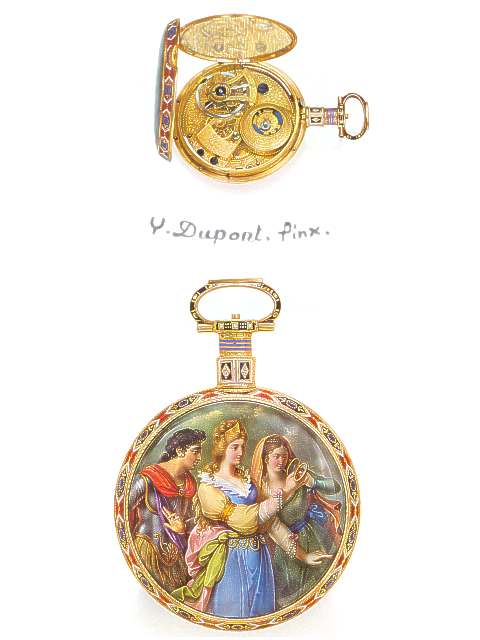 The painting is an excellent example of the level achieved by Dupont and unquestionably justifies his fame. The scene is from the third Act of the 1691 comic opera 'King Arthur and the British Worthy' by John Dryden with music by Henry Purcell. An adaptation in the 1780s at the Theatre Royal, Drury Lane, was billed as 'An Entertainment Consisting of Dialogue Music and Machinery called Arthur and Emmeline'. The play inspired an engraving by P.W. Tomkins, after Charles Ansell, that was published i1787, and that was the source for the enamel painting. The engraving bore an observation by Emmeline to Matilda which she, being in love with him, evidently intended the King to hear:Tis here again,Oh no, this face is neither mine nor thine,I think the glass hath borne another child.Jean-Francois-Victor Dupont (1785-1863)a highly reputed painter on enamel and porcelain. His work includes portraits of King George IV, Henry IV, H-B de Saussure, and others. He painted enamels for Ilbery, destined for the Oriental market. He is known for the beauty and elegance of his work, as well as for his distinctive palette, due to the fact that he mixed his own colours. The remarkable manner in which the figures in the foregrounds seem to advance, giving an impression of depth, is characteristic of his art. 'Dictionnaire des Hrlogers Genevois', by Osvaldo Patrizzi, Antiquorum Editions, Geneva, 1998.William Ilbery, London (ca. 1760-1839)for biography, see lot 418.Bautte Lot Cie. (1772-1837)Jean-François Bautte was born on March 26, 1772 in a family of simple labourers and was orphaned at the early age. He was apprenticed at twelve, successively learning the crafts of case-maker, engine-turner, watchmaker, jeweller and gem-setter. He was barely nineteen years old when he put his name on his first watch. Two years later, in 1797, Bautte took as partner the case-maker Moulinié and the firm Moulinié Lot Bautte in 1804 was joined by the watchmaker Jean Gabriel Moynier, the name of theompany then became: Moulinié, Bautte Lot Cie. before being renamed Moulinié, Bautte Lot Moynier.By that time, Bautte was the most important dealer of Geneva. Ruskin (The Works of Ruskin, Vol. 35, Praerita, page 325) reports this story about the celebrated dealer:A visit to Bautte's was made with trepidation, as if one was going to see one's banker. Hardly an indication on the building; a simple brass plate at the side of the narrow, vaulted entrance. The alley gave onto a courtyard resembling a cloister, and a large open staircase, wide enough for two people, led you to the green gate. There you paused to pluck up courage before entering.The room was not large and had only one counter in a corner. Nothing was displayed on this counter behind which two trusted employees attended. At the back, close to the window, was one of the heads of the house at his desk, Mr. Bautte, his son or his partner. Then one had to say what one wanted and to be decisive.In Bautte's shop, nothing was laid out to tempt the eyes. You wanted a bracelet, a brooch, a plain or an enamelled watch, serenely a choice was laid before you. There were neither large stones, nor flashy jewels, but fine work, made of the purest gold, enamels remarkable for their colours, all showing a certain 'finesse Bauttesque', interlaced garlands which an experienced eye recognised as being in the style of Paris or London. These items, of modest price, would last a lifetime. One went awayrom Bautte's with the feeling of having accomplished a duty, and certain of possessing an object of value.When Jean François Bautte died on November 30, 1837, his son Jacques Bautte and his son-in-law Jean Samuel Rossel, formed a partnership styled 'Jean François Bautte Lot Cie.' to perpetuate the founder's vision. Jacques Rossel, the son of Samuel, by 1883 became the sole owner of the Company, changing its name to 'J. Rossel Fils' . When he died in 1887, he was succeeded by Felipe Hecht and later his son Juan. In 1906, Juan Hecht turned over all his interests in the company to a friend and parent Cnstant Girard-Gallet, owner of Girard-Perregaux Lot Cie.Although not signed, the two pistols are almost identical to ones which are signed (F.X. Sturm and O. Patrizzi in 'Watches of Fantasy', plate No. 26, and the matching one from the same pair sold by Antiquorum, Milano, on 28 November 1994). It is therefore reasonable to attribute this example to the same makers: Moulinie, Bautte Lot Cie, a company that existed between 1804 and 1808.