The Sailor's WeddingPuy'Roche, attributed to Piguet & Capt, Geneva, circa 1805.Magnificent and extremely rare 18 ct. gold and enamel, pearl-set musical spyglass with concealed automaton scene and built-in watch, made for the Islamic market.

C. Fully operational spyglass with single draw tube with normal eyepiece and object lenses. The eyepiece has a zigzag pattern of engraved gold and polychrome opaque and translucent enamel. The top of the main cylinder has the same colours in a continuous foliate design. There is a row of pearls with two bands of azure blue both top and bottom. Four panels around the body have alternately, on a dark blue translucent ground, a vase of flowers and a pair of doves perched above musical instruments.hree of these panels rotate together and slide past the watch and beyond to reveal the automaton scene. This scene could be called 'The Sailor's Wedding'. There is a vari-coloured gold foreground consisting of a lighthouse and trees, and a painted enamel background of a ship at sunset with a cliff edge on which there is a simulated waterfall of twisted glass. Rotating through the middle ground there is a merry-go-round of painted silhouettes of sailing boats and two rowing boats, the second carring a wedding party, as well as a swan, all accompanied by music. Below the watch there is a polychrome enamel panel with military trophies, flags and an escutcheon bearing the Islamic crescent. D. White enamel, Breguet numerals, outer minute divisions with fifteen-minute Arabic numerals, winding aperture at 3 o'clock. Blued-steel 'spade' hands. M. 17.3 mm o, circular, gilt brass full plate with cylindrical pillars, fusee and chain, verge escapement, plain three-arm brass balance, continental gided cock pierced and engraved with six symmetrical sections, rack and pinion regulator with silver plate.The musical and automaton movement with gilt brass plate and bridges, five-wheel train, the worm governor with a two-winged fly mounted on its arbor. The music with pinned barrel and two stacks of polished steel tuned teeth, the automaton driven from the contrate teeth of the second, double wheel, the figures in the merry-go-round move by means of a set of spring-loaded levers, the last one acting on a ribbed semi-circle mounted underneath the opening so the automaton figures move only when passng in front of the scene.Signed on the dial, case stamped with illegible lozenge mark, possibly with 'C' at the top.Diam. 48 mm, length 90 mm. Published in the Sandberg book, page 400-401. 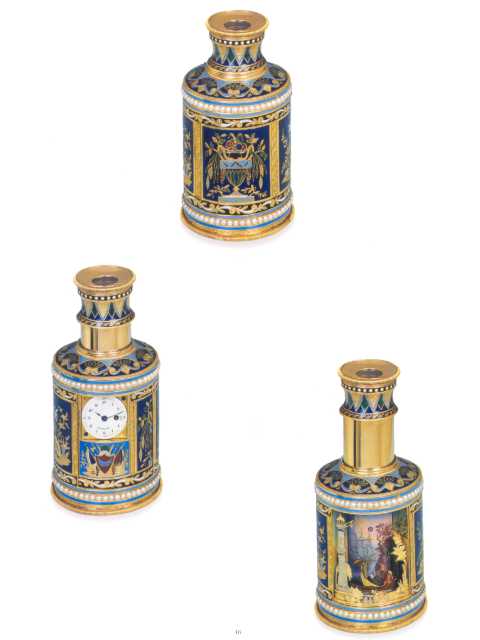 Sometimes called the merry-go-round, and sometimes revolving theatres, these pieces belong to the highest class of animated boxes., They are extremely rare, one survives in the Sandoz collection, illustrated in Les Automates, by A. Chapuis and E. Droz, p. 192, fig. 220-221.The movement, although not signed, was most likely made by Piguet Lot Capt. The piece is unusually well-finished, even for this type of luxury objects, with extreme attention paid to the execution of the smallest details.Puy'RocheA highly reputed watchmaker of the end of the 18th and beginning of the 19th century. He made montres de fantaisie with automata and music, spyglasses, and tabatières with music and automata, whose cases were richly decorated with painted on enamel scenes and champlevé.Piguet Lot CaptFor a biography, see lot 47.