C. Three-body, drum-shaped, hinged covers, the front pierced with two rows of 12 openings each for the hours, the centre pierced and engraved with a six oak-leaf rosette, the edge with laurel leaves, back cover etched in relief with four stylised heart-shaped leaf scrolls, each with a fleur-de-lis inside surrounded by arabesques, the band also in arabesques, small ring pendant. D. Fixed to the band cover, the edge with twelve touch studs, the hour chapter ring with Roman numerals from I to XII,n inner ring with Arabic numerals from 12 to 24 with a Z in place of 2. The centre engraved with arabesques. Single, blued iron elaborate hand. M. 46.6 mm, circular, entirely of iron, full plate, three rectangular pillars, two with concave front edges, fusee and gut-line with five and a half turns, the cone loosely fitted on short, straight fusee wheel arbor, the verge escapement controlled by a foliot, S-shaped cock, pinned from underneath, five-wheel iron train (48, 48/6, 30/5, 30/5, 15/5), rachet and click mainspring set-up, escape wheel mounted between two arms stemming from a block slipping over one of the pillars, mainspring cover fastened by four riveted pins, hour wheel driven from the fusee arbor. Movement fastened into the case from underneath by two pivoted, spring-loaded latches.Diam. 54 mm. Published in the Sandberg book, page 24-25 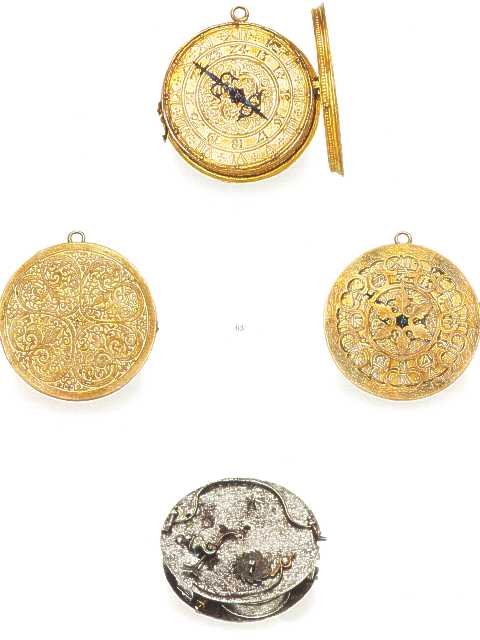 One of the oldest watches in existence. The earliest timekeepers powered by a coiled mainspring date back to the 15th century but the remnants that have survived, as well as written sources do not give precise information, as to when and who made the first portable timepiece. The same is true of the history of the fusee as found in the present lot. There is a general consensus that the oldest surviving clock with fusee is the one belonging to the Society of Antiquaries and made before 1518 by aohemian clockmaker from Prague, Jacob Zech, for the Polish king Sigmund the Great.1 The fusee, one of two major power equalising devices, had been known for at least half a century before the creation of Zech's clock. In Leonardo da Vinci's so called Codex I, there is a sketch of a mainspring with a fusee accompanied by Leonardo's comentary describing it as the standard practice at the time (between 1492-97). The second power equalising device, the stackfreed, also appears in Leonardo's Codex I,as well as Codex M3 (between 1497 and 99) and may have come to his attention through his German assistant, Giulio, around 1493/94. Stackfreeds are present in surviving examples from about 1530 - 1640.Small timepieces first appeared at the end of the 15th century. There are records clearly indicating that they were known before 1510 both in Italy and in Germany. The present lot has all characteristics of a German watch except the fusee, iron movement and the ornament of the present watch suggest Germany. Virgil Solis, an engraver, around 1541 published in Germany his ornamental engravings, later copied by others. One of them represents a clock dial with the center very closely resembling thernament on the back of the present watch.Since the 18th century, writers on horology have speculated as to the origins of both the stackfreed and the fusee, particularly with regard to which is the chicken and which is the egg. The stackfreed would seem to have originated in Germany, and the word itself is almost certainly a corruption of the German words 'stark' (strong) and 'feder' (spring). It is certainly found most frequently in German watches. The origins of the fusee, with due deference to Leonardo, are obscure. This watch has al the characteristics of a very early German timepiece, and indeed, it may be the case that German watchmakers dropped the fusee in the mid sixteenth century, to adopt the stackfreed, despite the latter being a retrospective step. There is of course always the possibility that the watch was made in Italy or destined for the Italian market. Cooperation between German and Italian craftsmen is well recorded in the manufacture of hardstone and ebony collector's cabinets, particulary for the Medici fmily Certainly this watch came to the collection of Lord Sandberg from an Italian family, who understood it to have been in their possession since it was made.'Archeologia', Vol. XXXII, pp. 8-35, by Capt. W. H. Smyth, Director, London, 1848'The Manuscripts of Leonardo da Vinci Codex I', New York, 1974.'The Unknown Leonardo', edited by Ladislao Reti, New York, 1974, p.253.'L'origine dell orologio tascabile', E. Morpurgo, Roma, 1954.'Arabesques, L'Aventurine', Paris, 2000, p.99.