C. Four-body, 'bassine', the front cover with a central painted enamel portrait of a young woman wearing an Egyptian head-dress set with diamonds. The surrounding decoration, in champlevé enamel, consists of white flowers and coloured panels containing floral motifs and hieroglyphics. The back of the case has an identical border, with, in the centre, two outward-facing sphinxes, each holding a plaque. The gold brooch pin has sphinx heads and birds and the clasp is set with a ruby. D. White ename, Roman chapters, subsidiary sunk seconds. Blued-steel Breguet hands. M. 15''', nickel with 'fausses côtes' decoration, 15 jewels, straight line lever escapement, cut bimetallic compensation balance, blued-steel flat balance spring.Signed on the dial, case, and movement.Diam. 44 mm. Published in the Sandberg book, page 216-217. 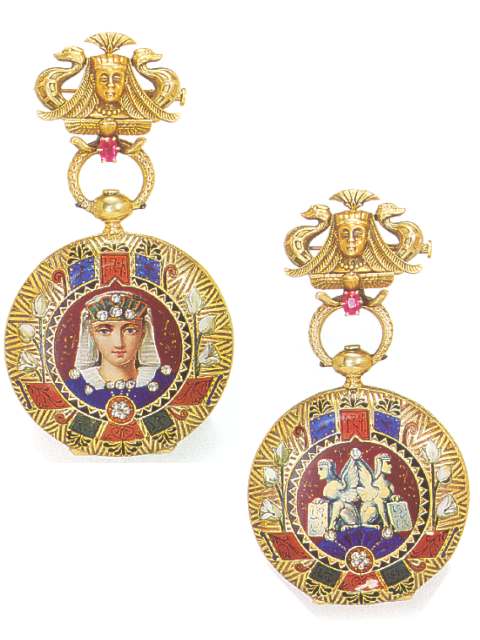 Jaquet-Droz, Pierre (1721-1790)Born on July 28, 1721 in La Chaux-de-Fonds, Pierre Jaquet-Droz was the son of a farmer who was an occasional clockmaker as well. He studied humanities and philosophy in Basel from 1738 to 1739 and then became interested in horology. We know little of him as a person, only that he was sober, serious, taciturn, and very careful in his work. On October 25, 1750, Pierre Jaquet-Droz married Marianne Sandoz, the daughter of Civil Lieutenant Abraham Louis Sandoz, who was later to accompany Pierre on hitrip to Spain. At the age of thirty-four Pierre Jaquet-Droz was left a widower. He never remarried, and seems to have devoted himself to his work as a watchmaker with all the more intensity.The second child of Pierre Jaquet-Droz and his wife Marianne, Henry-Louis , was born on October 13, 1752. Recognizing that he was a gifted child, his father sent him to Nancy to study music, science, mathematics, physics and drawing. In 1758, Jaquet-Droz made the long and difficult journey to Spain, to present his works to King Ferdinand VI. When he returned, the sum he brought back enabled him to devote himself to the making of the famous Jaquet-Droz automata, the writer, draughtsman, and musican, and to found the successful Jaquet-Droz firm, in London and Geneva, for the making of extraordinary mechanical and musical pieces.Upon his return in 1769, Henry-Louis took his place in his father's workshop, side by side with Jean-Frederic Leschot (1746-1824), an adoptive son. It was the beginning of a close and fruitful partnership between the three men. Pierre Jaquet-Droz was the first to make singing bird boxes and enjoyed an excellent reputation for complicated clocks, Neuchâtel clocks and automaton timepieces. When Pierre Jaquet-Droz grew old, the firm was taken over by his son Henri and Jean Frédéric Leschot, who chnged the name to Jaquet-Droz Lot Leschot.Pierre Jaquet-Droz died in Biel in 1790, aged 69 years old. Upon his father's retirement from the family firm, Henry-Louis naturally replaced him, travelling to London to look after business. He also maintained an active interest in the Société des Arts, studying questions related to the well-being of the Genevese 'Fabrique' and seeking solutions to problems which plagued his colleagues and fellow members.Henry-Louis' health was poor, however. Despite a journey undertaken to improve his condition, he died in Naples in November 1791, at the age of only 41, and then, Jean Frédéric Leshot took over the firm.