C. Three-body, ?Empire?, back cover, band and bezel engine-turned. D. White enamel with graduations in Reaumur and Fahrenheit scales. M. Gilt brass with bimetallic curb, rack-and-pinion transmission with coiled return spring, adjustable blued steel lever mounted in the rack acted upon by the curb.Signed on the dial, case stamped with the Montbéliard silver guarantee mark introduced on 22 October 1817 and with casemaker's stamp ?EV? in lozenge.Diam. 63 mm. 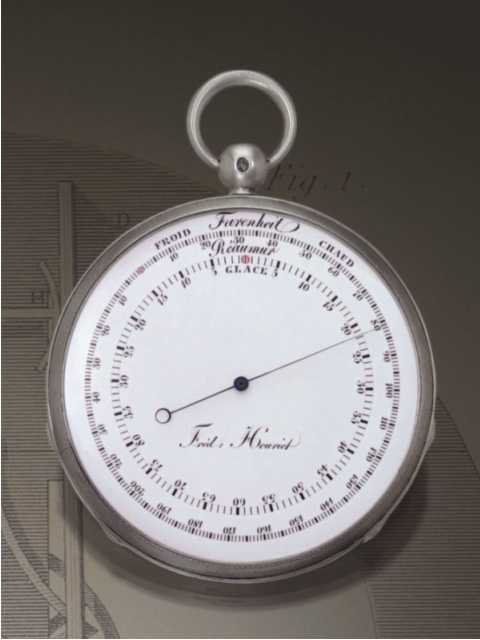 Bimetallic pocket thermometers were first made by Frederic Houriet, and later by Urban Jürgensen, Houriet's son-in-law, and Breguet. They were first described by Houriet in a hand-signed advertising leaflet.This type of bimetallic thermometer is illustrated by Urban Jürgensen in ?Principes Généraux de l'Exacte Mesure du Temps par les Horloges?, 1805, pl. XIX.Jacques-Frédéric Houriet (La-Chaux-d'Abel 25.02.1743 - 12.01.1830)Apprenticed in Locle to Abraham-Louis Perrelet, Houriet then lived 9 years in Paris before returning to settle in Locle, co-founding "Courvoisier et Houriet". In Paris, while working for Julien Le Roy, he met other great masters such as Ferdinand Berthoud, Louis Berthoud, Antide Janvier and A.-L- Breguet, for whom he became a collaborator and agent when Breguet was in Locle.Houriet's earliest metallic thermometers had steel and brass lamina; the later, more sensitive ones, had platinum and steel lamina. The difficulty in the construction of this instrument is to find the exact ratio of the contraction of the lamina and to trace the epicycloidal curb adapted to the arm of the rack, so that, by this combination, can be obtained the linear movement of the hand, in order to ensure this instrument's correct adjustment as to the full movement of the lamina. This type ofhermometer was used for meteorological observations as it could indicate the hottest degree as well as the coldest possible, as opposed to a mercury thermometer, which did not go beyond a certain degree of cold.