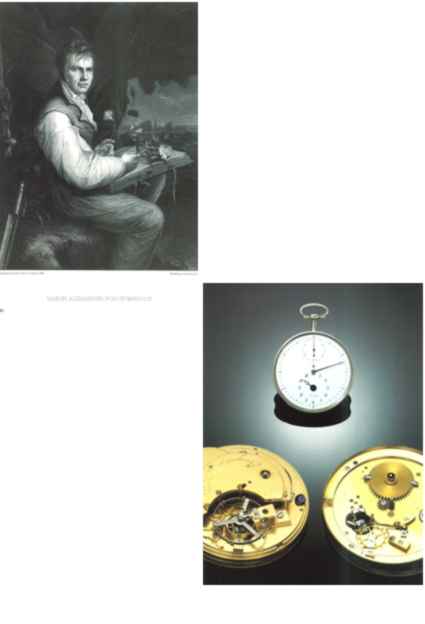 THE ART OF BREGUET

History: According to the repair books, the watch was returned by Baron von Humboldt for overhaul on 11 April 1827. Note: The enamel dial of this watch is numbered 15 in the same way that watch No. 3248 (see lot 65) bears the No. 6; and they were in fact made for a series of garde-temps before Breguet left for Switzerland. As virtually all the watches were finished well after his return, the movements bear much higher numbers. During Breguet's lifetime, the firm made very few watches destined for entirely functional use as pocket chronometers or deck watches, unlike the contemporary english and french makers, such as Arnold, Earnshaw, Berthoud and Motel, who made little else. The records indicate that von Humboldt bought at least three of which two are included here, the third being in the Beyer Museum in Zurich. Literature: Illustrated and described in G. Daniels, The Art of Breguet , p. 160, figs. 108 a - d.
Baron ALEXANDER von HUMBOLDT (1769-1859) Baron Friedrich, Heinrich, Alexander von Humboldt, Prussian natural scientist, was born in 1769 in Berlin and died in 1859. He was the brother of Wilhelm von Humboldt, the German diplomat and learned philologist and philosopher of language. He was a great traveller, explored America with Bonpland (Journey to the Equinoxial Regions of the New Continent between 1799 and 1804). His second home was France. He came to Paris in 1805 and was elected as an Associate Member of the Académie des Sciences. Among his friends were most of the city's eminent scholars : Achille Valenciennes, Arago, Guy-Lussac, Cuvier and Latreille. His sovereign however, asked him to return to Berlin in 1827, where he then took on the post of Private Counsellor and subsequently had to recognise the new King who had emerged from the July revolution. He undertook his second voyage to Asia on behalf of the Czar Nicolas I of Russia, the resulting book, Fragments of Geology and Asiatic Climatology, 1832, contributing towards the advances being made in climatology, oceanography and geology. He also wrote the famous Kosmos ou Description physique du Monde in which he summed up the entire human knowledge about Heaven and Earth. Alexander von Humboldt is considered one of the most important scientists of his time. Most of his experiments and expeditions were accomplished with clocks and timepieces which had been specially designed for him by Breguet.