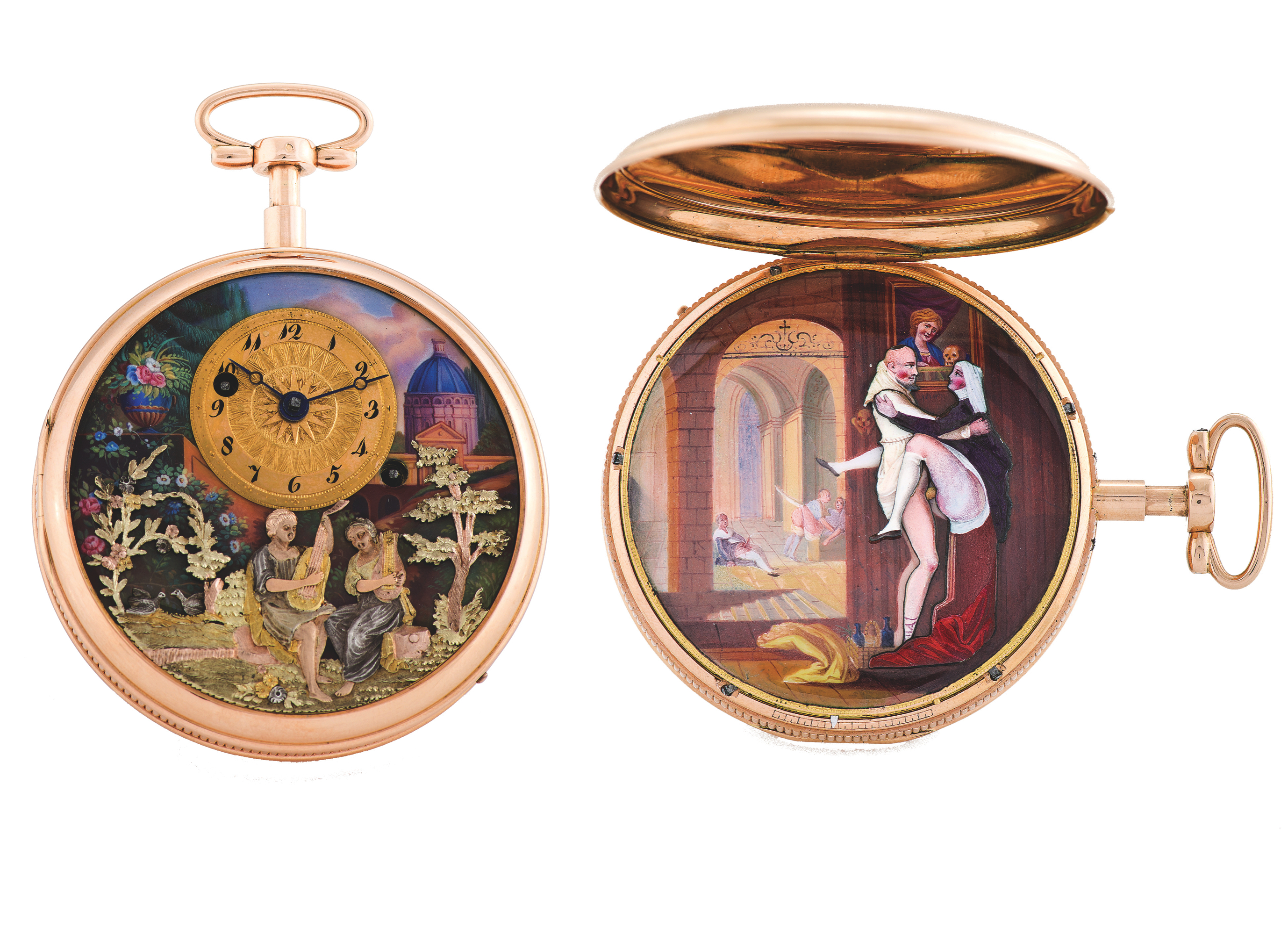 C. Three-body, ?Empire?, polished with reeded band. Fixed gold and finely painted on enamel cuvette with an erotic automaton scene of a monk and a nun standing in the interior of the abbey, a vanitas portrait on the wall behind and in the background further frolics take place, activated via a steel cam when the music plays. D. Small eccentric gold, engine turned and engraved, Breguet numerals on a plain reserve, outer dot minute divisions, the center engraved with a rosette. Blued steel Breguet hands. The gold dial plate finely painted on enamel with a scene of a flower garden and landscape with a classical building, the foreground applied with a varicolored gold chased automaton scene of a seated gentleman playing the mandolin and a seated lady playing the lyre, to the side two birds in an arbor, one moving towards the other with the music. M. Gilt brass full plate double train movement with cylindrical pillars, going barrel and cylinder escapement, plain gilt three-arm balance, flat balance spring, small gilt brass cock with polished steel end-piece, repeating on gongs activated by depressing the pendant, regulator arm protruding from under the cuvette with engraved scale at the edge. Musical train with pin-barrel and six stacked steel blades. diaM. 59 mm.

This watch is undoubtedly the work of the exceptional Genevan watchmaker Heny Capt. it can be compared directly to other examples signed by him. This watch, with its concealed erotic automaton, is one of very few known examples made by Henry Capt with two automaton scenes. The present watch is of higher specification than most; it has three animations on the dial instead of the usual two. The arm of each musician moves and a charming scene of two billing doves in an arbor, one dove appears when the music starts and disappears at the end of the tune. The enamel erotic scene is of very high quality depicting a monastic interior, of particular note is the small vanitas painting on the wall behind the amorous alluding to the brevity of youth. Literature : A very similar watch formerly in the B. Franck Collection, Paris, is illustrated in ?Le Monde des Automates?, Chapuis & Gélis, 1984 ed., fig. 305. A watch with almost identical automaton musician and dove scene but with different erotic automaton was sold by Antiquorum, Geneva, March 27th, 2011, lot 187. Henry-Daniel Capt Born in Chenit in 1773, he married Henriette Piguet. He specialized in the production of complicated watches, musical watches and automaton watches. Among the first in Geneva to use the musical mechanism with pinned cylinder and tuned teeth comb, he was famous for his snuffboxes with music and automaton scenes. From Ventôse 16, An X (March 7, 1802), to 1811, he formed a partnership with Daniel isaac Piguet, who was from the same village as he. Their signature was Piguet & Capt. in 1811, when Piguet broke off to join Meylan in a new partnership, Henry-Daniel Capt continued to work on his own until, in 1830, he went into partnership with Aubert and son, Place Bel-Air. Their signature was Aubert & Capt. They were among the first Genevan makers to produce watches with chronograph. in 1844 the workshop was at 108, rue neuve in Geneva. it was then managed by Capt?s son, Henry Capt Jr. After a short time it moved to 85, rue de la Fusterie, and in 1851, to 177, rue du Rhône. in 1880, the firm was bought by Gallopin and its name became H. Capt Horloger, Maison Gallopin successeurs, a trademark registered on november 1, 1880, under the no. 44. This signature was only used for watches retailed in their own store, the watches supplied to other retailers being merely signed Henry Capt. Henri Capt, along with isaac Piguet and Philippe Meylan, was the foremost maker of small musical automata in the late 18th and early 19th centuries. Most of his work is not signed, although he sometimes scratched his name on his movements