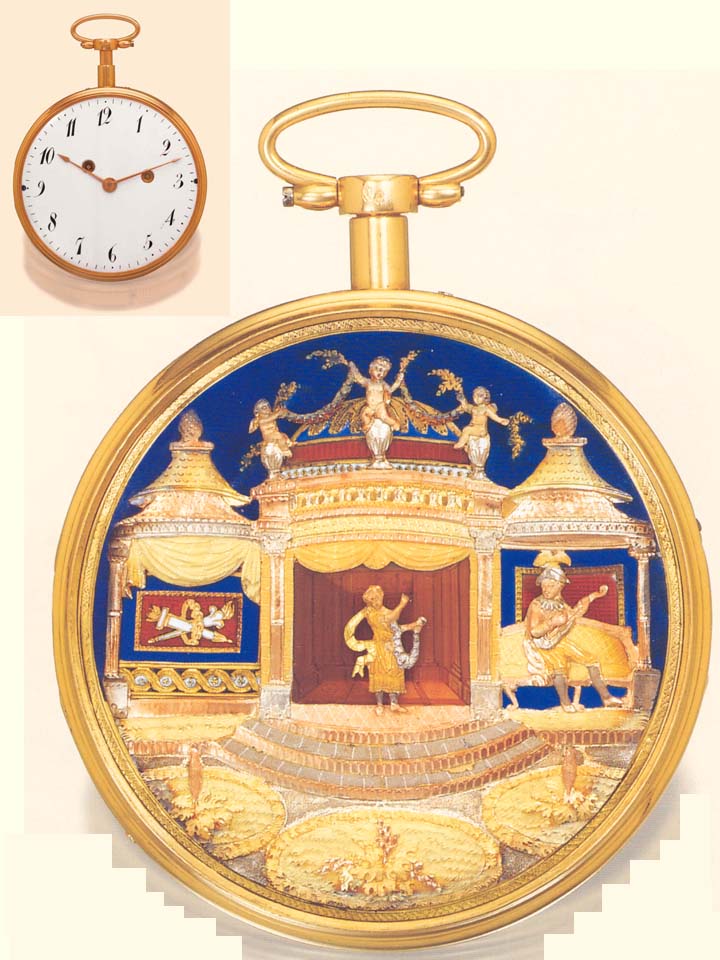 The "Theater" is one of the rarest of automaton watches. Only seven are known:1. One formerly in the Gélis Collection 2. One in the Sandoz Collection, formerly in the Loup Collection 3. One formerly in the Salomons Collection 4. One signed Louis Duchêne et Fils, sold at Antiquorum, April 21, 1996, lot No. 258. 5. One featured in Antiquorum's auction "The Art of Horology in Geneva", November 13-14, 1999, lot No. 74. 6. One by Du Bois et Fils, in a private German Collection. 7. One sold by Antiquorum, April 13, 2002, lot 65. 8. The present watch, by Henry Capt. All of the above-listed watches, with the exception of the first and the last, utilize similar ebauches, and feature a similar manner of fixing the movement to the case, which strongly suggests that they were made by the same maker. Only three of them are signed, one by Duchêne et Fils of Geneva, the other by Du Bois et Fils of Le Locle,and this one by Capt. Four of them (Nos. 1, 2, 3, 7) were made for the Chinese market, which would explain why they are not signed.This piece represents one of the earliest applications of the invention of Antoine Favre, presented in 1796 to the Geneva Société des Arts, for a "carillon without bells playing two tunes and imitating the sound of the Mandolin, enclosed within a snuffbox of ordinary size", in which vibrating tuned blades replaced the much more bulky and fragile carillon bells.This invention was to revolutionize musical horology and the art of making objets de vertu in Geneva. It appears, however, that Favre only re-invented vibrating blades, which were presented in 1769 by Michel Joseph Ransonnet of Nancy to the French Academy of Sciences. Their "re-invention" by Favre possibly saved the Genevan horological industry from a period of stagnation due to the French occupation, high taxes, and the English embargo.The invention did not make Favre wealthy. By 1799 he was losing his eyesight, and asked the Société des Arts to loan him 36 Louis. Sad as it was from a human point of view, Favre's colleagues prospered greatly from his invention. The first to grasp the tremendous potential of the new idea were Isaac Daniel Piguet, Henry-Daniel Capt and Philippe-Samuel Meylan. Their early pieces, like the present one, are extremely rare, and most of the surviving pieces are in museums.The Société des Arts' "Committee on Mechanics", which examined Favre's invention, suspended its meetings until 1800. In 1798, after a prolonged "war of nerves", French troops marched into Geneva and annexed the Republic. Over 90% of the work-force was affected, the situation was tragic. It was not until the beginning of the 1800s that the Fabrique began functioning again. Therefore, the oldest mechanical musical pieces with tuned blades were produced no earlier than approximately 1801 or 1802. Pieces signed by Capt alone date from either before 1802, when he became associated with Piguet, or after 1811- which is probably the case for this piece- after Capt's association with Piguet ended.The present watch is one of the first musical automata of the second generation that is, using tuned teeth instead of hammers and bells slim in comparison to its predecessors, elegant but robust.