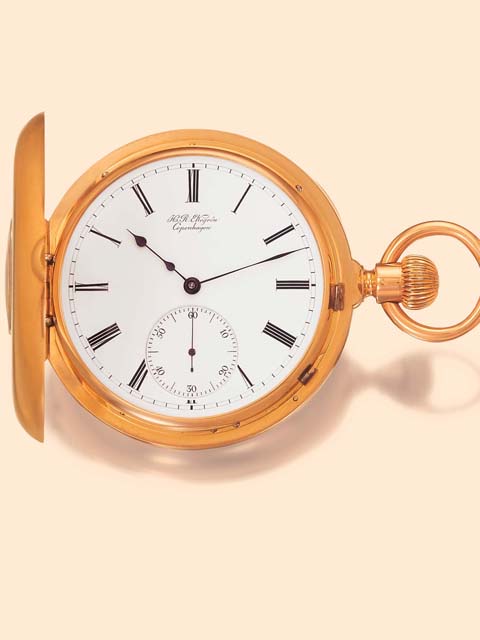 Henri-Robert Ekegrén (1823-1896).He was the son of Daniel Ekegrén, of Swedish origin, who had settled in Copenhagen and married a Danish woman. Henri-Robert, at the early age of twelve, became interested and skillful in watchmaking and engraving. After his apprenticeship, and already equipped with the Swedish, Danish and German languages, he obtained a government fellowship to travel to other watchmaking countries. During one winter he worked for his fellow countryman, Jules Jürgensen, at Locle. In London he worked for a well-known firm and acquired a command of English. In Paris, he worked for the celebrated Winnerl and had for a close friend Adolph Länge.In 1847, he arrived at his longed for destination, Geneva. There he worked the first year with Henri Golay, an expert watch finisher. Over the next ten years he worked with Golay-Leresche where he did finishing, repairing, timing, and waited on customers, for which he was well-equipped, with his command of five languages. In 1857, deciding that it was time to benefit from his experiences, he formed a partnership with Ferdinand Westermann, who had the necessary capital. Ekegrén took as his first understudy a young man, Louis Chevalier, who had been at the Geneva School of Horology. Chevalier was to remain with him for thirty-seven years. At the end of five years Mr. Westermann withdrew to seek a climate more agreeable to his health. Mr. Ekegrén served several years on a committee to reorganize the School of Horology, so that it might better serve the manufacturing interests of Geneva.At the Exhibition of 1867, he displayed thirty-six beautiful watches of his design, which won him the gold medal and a report from Professor Wartmann which brought him honor and new clients. Subsequent exhibitions, Vienna in 1873, Paris in 1875, Philadelphia in 1876, Paris again in 1878, and Zurich in 1883- brought him, as well as his collaborator Louis Chevalier, further honors and recognition. In competitions of the Society of Arts, and later the Observatory of Geneva, his watches obtained very high ratings. He was one of the first "régleurs" to apply the theories of Phillips.He made no striking inventions but constantly worked to improve each detail and to make a product of the highest merit. His success is evidenced by the high esteem in which his watches are held in Europe and America even to the present day. Though a skillful watchmaker, he devoted himself to merchandising clocks, watches and works of art.