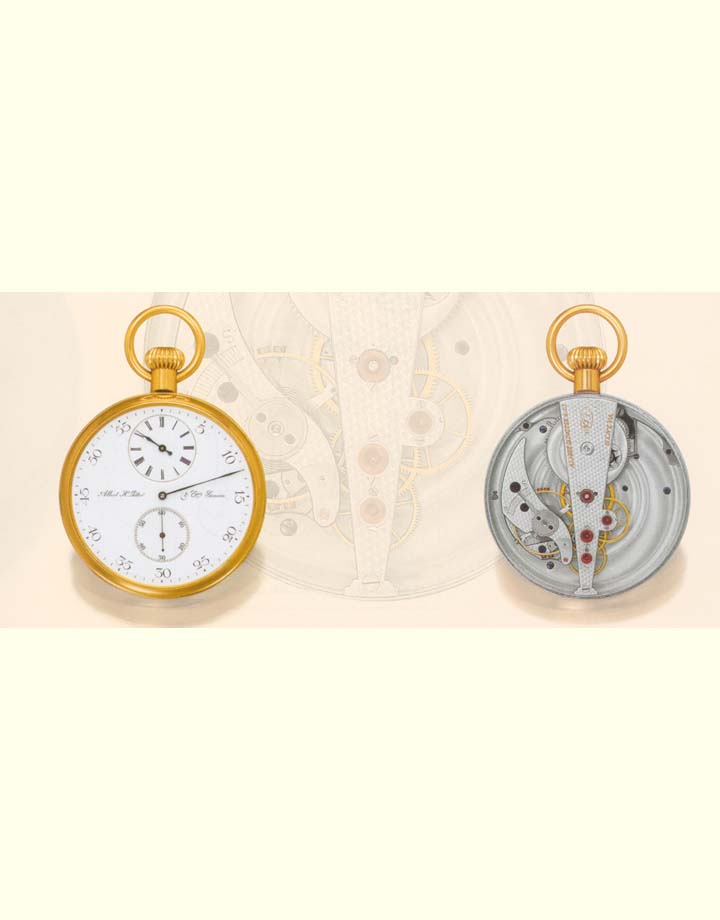 Previously in the collection of the Director of the Geneva School of Horology.The present watch represents the ultimate in Potter design, based on years of experience.With the present watch, Potter wanted to revolutionize the modern watch, just as Lepine had done 100 years previously. This watch, marked No.1, appears to be a one-of-a-kind piece; no other is known to date. Potter's layout is ingenious and innovative. Potter revolutionized watch design twice; the first time when still in America, he designed and patented his famous plate designs, one for a lever escapement (see Antiquorum Nov. 11, 2001, lot 299), the other for his pivoted detent escapement (see Antiquorum Nov. 11, 2001, lot 298).After his arrival in Switzerland in 1875 his production was chiefly based on these two designs. Within a decade, he sought to improve those already famous designs, to create a perfect watch, easy to manufacture, easy to disassemble for cleaning, of high quality and easy for the owner to read and to set. Potter made considerable improvements, some of which he patented.* The pillar plate is designed to incorporate the band, thus eliminating the need for a further case band. The bezel and the back are snapped onto it. This ingeniously simplified design was patented on April 5, 1887 (US patent No. 360475-7).* The pendant was fixed to the pillar plate band by means of two prongs and two additional pins. This was patented on the same date under the No. 360478.* The train was arranged in a straight line, thereby requiring only one narrow bridge for the entire train. It was fitted to the pillar plate band and was fixed by means of two pins on one side.* The winding/setting mechanism: the intermediate setting wheel was set on a spring-loaded bridge, which was held by a lever controlled by swinging the bow. Mode changing from winding to setting is achieved by means of Jules Jürgensen's bow setting arrangement-when the bow is pulled forward, the watch can be set.* The escapement: Potter devised a special lever escapement with escape wheel having only one tooth. It is simply a round ruby pin set on a steel plate and staked to the pinion. This he secured by patent No. 360474 on April 5, 1887.* The dial is of the regulator type, very elegant and easy to read. For securing the dial Potter chose a system often used by Vacheron Constantin in which the dial is fixed to the pillar plate by means of three screws on the dial feet.* The balance has small "wings" at the arm for poising "in the raw", that is, before the screws are put in. This insures that temperature compensation adjustment will not affect poising. Potter also made the cut further from the arm to decrease centrifugal error. At the same time he changed the ratio between the thickness of steel and brass laminae.In designing the balance, Potter went against current practice, which had evolved from the theory of marine chronometry. Perhaps deducing that pocket watches presented different requirements than marine chronometers, he used a more rigid balance and changed the laminae proportions from those generally used, which were commonly assumed to be perfect but had never actually been put to the test. This type of balance was less subject to centrifugal force distortions, with decreased Middle Temperature Error.This watch, with its revolutionary design, is very likely the prototype for a watch which embodied one of Potter's ideals: a high-quality, low-priced, and therefore extremely popular, watch. Potter's principal idea, visible in the present watch, was to make the back plate of the movement an integral part of the case, so that the case body and back plate could be stamped with one blow from sheet stock, with no machining necessary. It is interesting to note that over 100 years later a similar idea, that of incorporating the movement plate with the case, can be seen in the famous Audemars-Piguet self-winding wrist tourbillion.Potter took out several American patents related to the ideas embodied both in this watch and in the "Charmilles" watch:- 360477 for a "watch case & movement plate combined"- 360478 for a "watch case center and pendant"- 360818 for a "manufacturing watch plate & case"- 360819 for a "watch plate" all dated April 5, 1887, and two additional patents- 418381 of Dec 31, 1889 and- 425342 of Apr 8, 1890, both for "watch stem-wind case part of watch".All the patents were taken out in the name of the New Haven Watch Co., which in 1887 became the Trenton Watch Co. The manufacturing was eventually entrusted to J.J. Badollet, who had a factory in the town of Charmilles, hence the name of the watch. The watch consisted of 70 parts, not including screws, and sold for between $3.00 and $4.00. Production lasted from the early 1890s until 1895 and probably no more than 25,000 were ever made. In 1892, Robert Ingersoll's one-dollar watch dethroned the "Charmilles" watch, resulting in financial disaster for Badollet and Potter. The present watch, a horological masterpiece, remains a prototype testifying to Potter's never-realized dream: that of making a watch of excellent quality yet easy to manufacture.