The Longitude at the Eve of the Third... 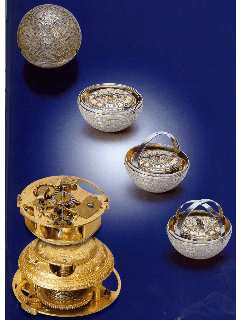 Provenance: Formerly in the Bernard Franck Collection, Paris.This watch was described and illustrated by S. Guye and H. Michel in Mesure du temps et de l'espace, Fribourg, 1970, p. 85, pl. 6a.When studying the history of technology and its influence on scientific and economic development, it is only too easy to concertina the time frame associated with the introduction of a particular invention, and to assume that its proper function was widely and immediately understood.1 For example, the application of the pendulum to a clock by Christian Huygens in 1657 - perhaps the most important advance in the history of precision timekeeping - seems totally obvious to anyone with the slightestinterest in horology today, and for the slightly more curious, it seems incomprehensible that a man of such consumate skill as Jost Burgi did not bridge the gap between his cross-beat escapement and the simple pendulum.However, there are a sufficient number of curious and sometimes impractical clocks and watches that have survived to clearly demonstrate that important innovations did not immediately spread rapidly throughout the trade, and were not always interpreted in the same way. The 'invention'? of the spherical pendulum watch must fall into this category.Huygens himself attempted to adapt his invention to build a sea-clock, for the obvious purpose of finding longitude, and his clocks made use of a short (half-seconds) pendulum; as is well known, they were not successful.Whether it was intended for actual use at sea is currently unknown, but the watch now offered for sale survives as aremarkable tribute to the watchmaker's ingenuity, and emanatesfrom the period when serious attempts to make sea timekeeperswere just beginning. It is apparently one of only three known to have survived housed in a spherical gimballed case (see below),but a fourth pendulum watch, of different design, also survives. The latter is a watch of conventional form with a pendulum the full diameter of the movement, and pivoted on the edge (like a pedometer), swinging across the back plate and banked by twofeather springs. Clearly it was designed to operate in a verticalposition, the banking springs preventing the pendulum from 'over-arcing'? when the watch was moving. On the contrary, the gimballed design employs a pendulum of such short length and light weight that it is technically a form of ratchet brake or high frequency oscillator. Even with the aid of gimbals, the watch will never remain completely level, and there will always be the effects of inertia caused by motion. Leaving aside considerations as to whether such a watch could attain a reasonable degee of accuracy, it is interesting to speculate on the watchmaker's thinking behind his design. Perhaps inadvertently, he has stumbled on a property of oscillators that was to be used years later by Julien Le Roy to regulate his repeating trains, and in the 20th century with very high frequency escapements.The other known pendulum watches:- Gilt-brass spherical gimballed pendulum watch, signed by Madelainy A Paris, 49 mm. diam., circa 1680.- Formerly in the Dunn-Gardner Collection, sold at Christie's, 29 April, 1902, lot 190 to Webster, and sold again by the above from a private estate, 7 April, 1976, lot 154. Bought by a private museum. Recorded by Britten.2- Silver spherical gimballed pendulum watch, unsigned, South German, circa 1680. Preserved in the Hessiches Landemuseum, Kassel. Recorded by Bertele.3- Another watch, without gimbals and in a conventional case, using a pendulum between feather springs, which could only work in a vertical position, is also preserved in the Hessiches Landemuseum, Kassel.1. David S. Landes, Revolution in Time, Harvard 1983, and by the same author The Wealth and Poverty of Nations, W.W. Norton, 1998. Both volumes examine in depth the relationship between technology and economics with particularly relevant information on horology.2. Britten, Old Clocks & Watches and Their Makers, 6th ed., 1932.3. Bassermann-Jordan/Bertele, UHREN, Braunschweig, circa 1970, p. 268.Mattheus Hallaÿcher, Augsburg. Born 1643/44, became a Master in 1672, died 1704. Worked with his father Johann Otto (1612-1689) making a wide range of unusual automaton, astronomical and experimental clocks and watches.