Swiss, made for die Indian Market, circa 1895. Fine 18K gold and enamel, hunting cased, keyless minute repeating watch of Princely provenance, made for H. H. Mohender Sing, Maharaja of Patiala. Accompanied by a matching gold and enamel chain and a gold pearl and ruby set pencil. 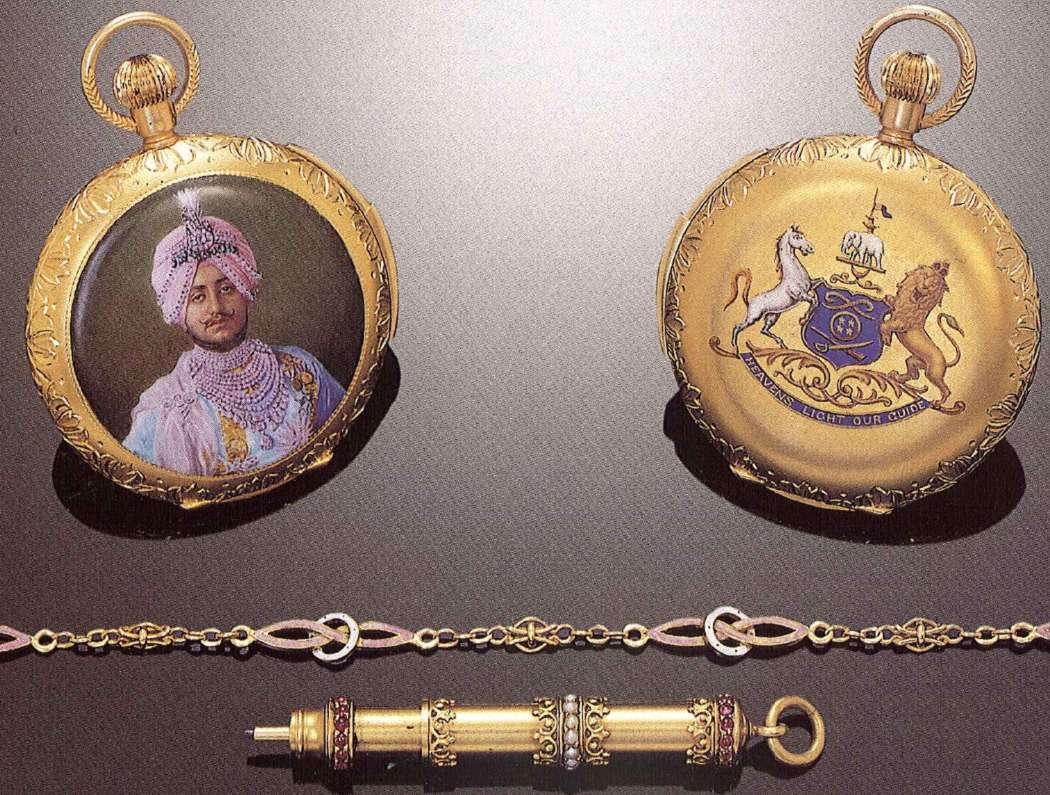 The Maharaja of Patiala is portrayed on this watch in full attire, with a magnificent sarpech and necklace, and he is also wearing several medals and decorations including "The Star of India", which he was awarded on May 28, 1870. The Maharaja's full title was: Lieut.-Gen. H. II. Farzand-i-Ikhas-i- Daulat-i-Inglishia, Mansure-i-Zaman, Amir-it-Umra, Maharaja Dhiraj Raj Rajeshwar Shree, Maharaja-i-Rajgan Maharaja Sir Bhupindra Singh, Mohinder Bahadur, Yacht Vanshavatans Bhatti Kul Bhushan, Maharaja Dhiraj of Patiala, G.C.S.I., G.C.V.O., G.B.E. He was ruling Prince of Patiala State from 1891 to 1938. The Princely State of Patiala is in the Punjab, in N. W. India, and was the largest Sikh State. The British occupied Punjab in 1849 and later designated it a province. The Maharaja of Patiala appreciated precious objects, jewelry and of course watches. From about 1925 he is known to have been one of the great clients of Cartier and indeed commissioned Cartier to remodel his crown jewels, probably the biggest commission of all time in terms of quality and quantity. In 1929, before consigning the elegant reworkings to the Moil Bagh Palace in Patiala, Cartier organised a splendid exhibition of the Maharaja's jewels, in Paris, at the rue de la Paix, which attracted wide publicity. As mentioned in an article in the Antiquarian Horologe issue of December 1984, p. 156, the Maharaja had many interests among which "shooting, cricket, polo and motoring, and he was one of the first in India to have an automobile, a French Dc Dion Bouton in 1898. He was also the first Indian prince to have a 20 h.p. Rolls Royce; a 1922 Barker Tourer on a chassis 4'2 G2. Nine further examples of this model were added to his collection which at one time totalled thirty eight Rolls Royce cars!" ° Literature: Antiquarian Horology, Number Two, Volume Fifteen, December 1984, pp. 147-156, article entitled "A Rare Complicated Watch By Piguet, circa 1910" by R. Good. The front cover of this issue of Antiquarian Horologe features a portrait of The IVlaha ajah of Patiala. : The information quoted from the December 1984 issue of Antiquarian. Horology, came from John M. Fasal's book The Rolls Royce 7ieenty, published by the author in 1979. Cartier; Le Joaillier do Platine, by Franco Cologni and Eric Nussbaum, La Bibliotheque des Arts, Paris, Lausanne, 1995, p. 39, illustrated on p. 34. The Magical Art of Cartier, thematic auction catalogue by Antiquorum and Etude Tajan, Geneva, November 19, 1996, p. 265.